Once you have Sharla as a permanent party member, and your Colony 9 affinity is at 3✰, Jackson's quest can be activated. He will ask you to find someone to take him on as an apprentice. This quest has two separate endings, depending on who you talk to. Your chosen route also determines whether you activate Jackson the Poet or Jackson the Cook.

This quest is only available if you spoke to Kenny Rohan instead of Giorgio in Jackson's Awakening. Jackson has asked you to defeat the Dim Wisp so that he and Kenny Rohan can finally concentrate on their art. The Dim Wisp can be found near Kneecap Hill in Tephra Cave. The wisp will only come out at night, so if you need to, change the time in the menu. Return to Jackson to complete the quest. 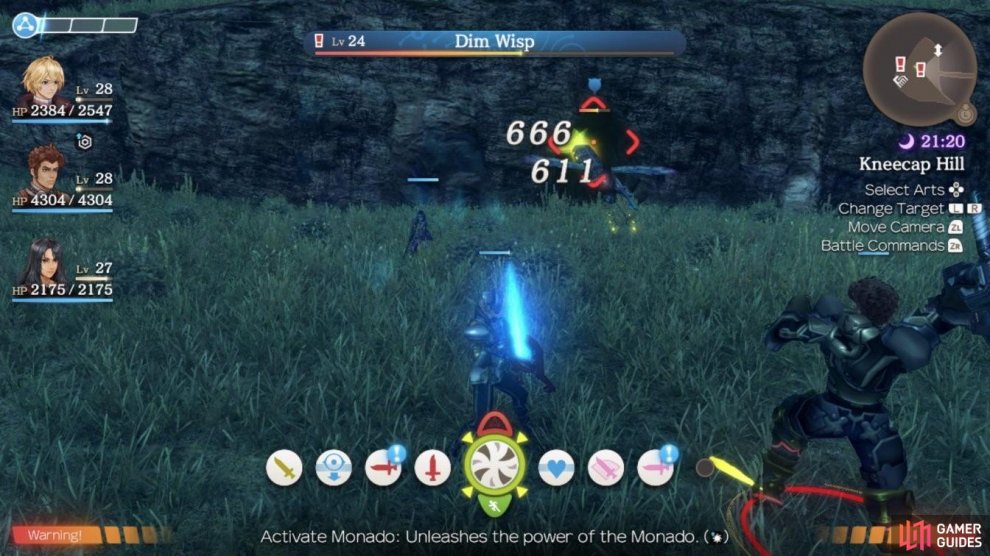 This quest is only available if you spoke to Giorgio in Jackson's Awakening. Jackson has asked you to collect 5 lots of Raw Piranhax Meat from the Colony Piranhaxes here in Colony 9 so that he can create his new Curry recipe. The easiest place to find these are by heading to the Cylinder Hangar Landmark and then leaping into the water, you'll find plenty here. Alternatively, head to Outlook Park and search in the cave under it. Once you have them, return to Jackson to hand them over and complete the Quest.

This quest is only available to you after you escorted Juju to the Refugee Camp in Bionis' Leg and Sharla joins your party. Also, you will only be able to log this quest if you chose the consulting a relative option during Overworked and Underpaid. His business seems to be in a rut, as customers are complaining the curry isn't like it usually is, since Giorgio is busy with his daughter. As a stopgap, he wants you to get five lots of Piranhax Roe for him, which drop from Piranhaxes on the Bionis' Leg.

The only Piranhax in the Bionis' Leg area are Leg Piranhax, which can be found in the pools of water to the northeast and southwest of Jabos Rock Rest Area landmark (there are none at any other bodies of water, including Rho Oasis). Return with the items and Giorgio needs one more thing, three pieces of Juicy Broccoli. This is a collectable in the Bionis' Leg area, so you might have enough already. If not, then the quest markers will help you find them a lot easier, so keep a lookout for those as you roam about. Once you find the necessary amount, bring them back to Giorgio to finish.

If you chose Route A in the Overworked and Underpaid quest, then you will have activated this quest, rather than Out-of-Luck Giorgio. Giorgio tells you he doesn't have the time to play with Paola, and asks you to spend some time with her instead. Upon talking to Paola, she will ask you to defeat the Fiendish Bunnit, who can be found on a hill near Cliff Lake. To complete the quest, talk to Paola and then to Giorgio.

Kenny Rohan asks you to find out about the mysterious light in the lake. There are two potential routes to this quest, however, both have similar outcomes, so it does not matter too much which you pick.

Once you return to Kenny Rohan with the rumours you have heard, he will tell you you're wrong, and reveal that the light is merely an ether light that fell into the lake after the Mechon attack.

This quest must be completed in order to unlock Kenny Rohan's second quest, Out Like a Light. This is not affected by your chosen route.

After completing A Mysterious Light, Kenny Rohan asks you to decide what to do about the broken lamp. He will give you an ether cylinder, and you can either use it to fix the lamp or throw it away so the lamp remains broken. Here, you will have two endings to the quest, depending on what you choose to do. There are no wrong answers here, it is what you believe would be best for the people of Colony 9

You can farm for rare drops by fast travelling back and forth between landmarks to force enemies to respawn. 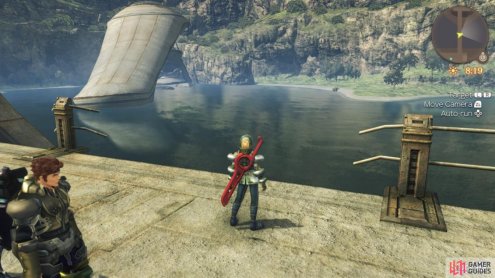 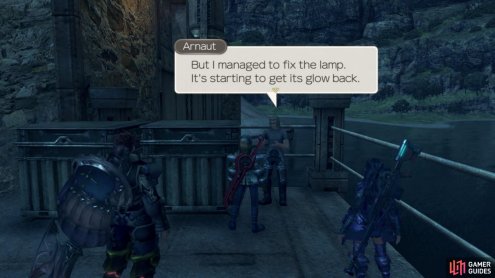 This quest will be unlocked once you have witnessed the Sororal Statues cut scene and also begun Colony 6 Reconstruction. The Gem Man offers to make you a Mobile Furnace if you reconstruct Colony 6 to level 1 and collect an Ultra Small Reactor. Once completed, return to the Gem Man and receive the Mobile Furnace.

Emmy Leater will offer this quest upon you reaching Makna Forest, as well as after you complete A Young Captain's Rise. The lieutenant colonel qualification test is about to begin and it's not looking good for Emmy. She asks for your help, asking for either a Carbo Shield or a Nopon Claymore. You can only get one of these items for her, which will block off the other route. Both routes lead to different quests after finishing this one. 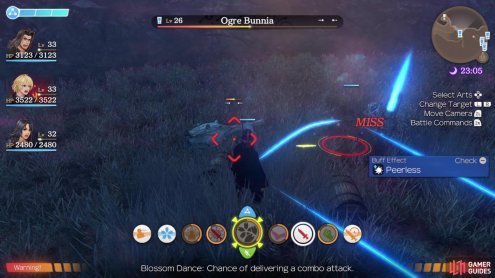 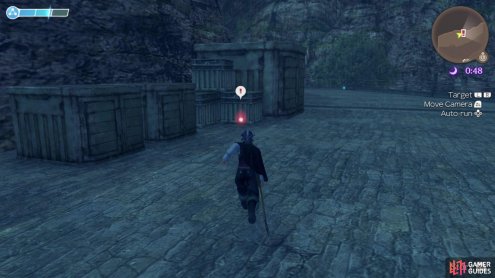 This is a rather tricky quest to even unlock as you'll need to get a fair way into 4✰ Affinity for Colony 9 and then spend time speaking to every resident multiple times until they offer no further Affinity Boosts. At that point, you may find Désirée with this Quest so long as you have Shulk as the party leader. She's looking for advice on what route to take in life and looks to Shulk for advice. You'll need to listen to all of the stories that Desiree tells you and then at the end of it all, you'll be given a choice for her future. You will have to choose whether she becomes a Soldier (Route A) or a Sculptor. The rewards are the same, however, there are mutually exclusive quests that are unlocked depending on your choice.

Soldier - If Route A is taken then Désirée will become a soldier and you can unlock the quest, Betty's Gift from Betty.

Sculptor - If Route B is taken then Désirée will become a sculptor and you can unlock Désirée's next quest, Désirée's Apology.

To obtain this quest, a number of prerequisites must be fulfilled. Firstly, you must have 3✰ affinity with Colony 9 and Jan, Cheryl, Minnie and Dionysis must be registered (as well as Jan) on the affinity chart. Jan and Minnie must also have a link between each other, this is established when Jan tells you that he had dinner with a young girl (Minnie). Once that affinity link is established, you can talk to Dionysis who will ask you for your opinion on the relationship. To obtain this quest, you must answer "He's too old", if you pick the other option then you will notbe able to activate Jan's quest. After all of the prerequisites have been satisfied, you should be able to head over and accept the quest from Jan in the Military District.

Jan thinks young people need a challenge to build character. He has asked you to defeat Elder Gragus near the Nopon Arch in Makna Forest. The Elder Gragus is a level 34 Quadwing-type Unique monster. There are a few Jungle Quadwings surrounding him that might also join in on the fight. Once you have defeated Elder Gragus, head back to Jan to complete the quest. 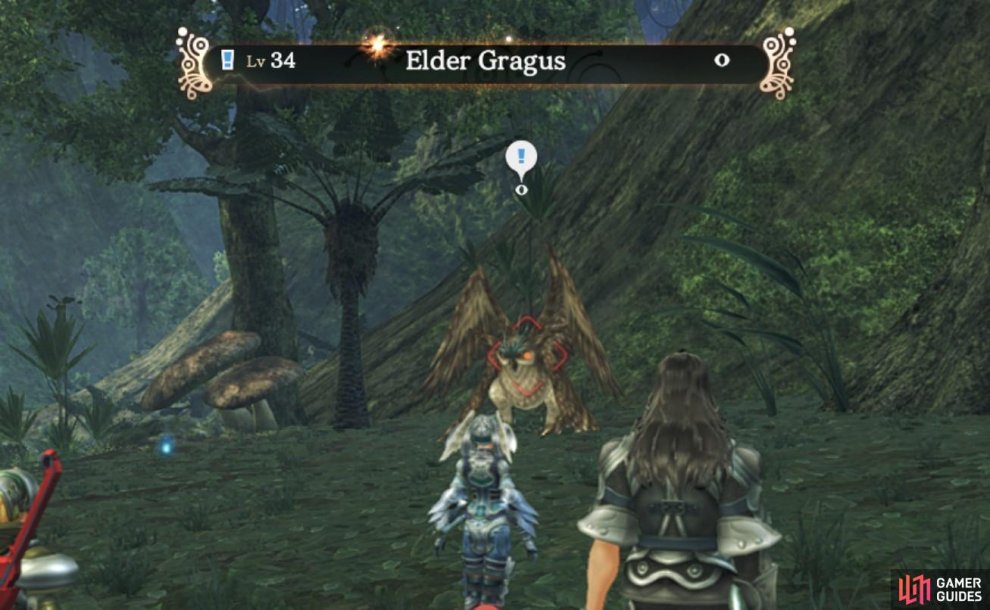 This quest will expire if you activate and complete Jiroque's quest, A Little Brother's Fight. You may only complete one or the other, and both quests have a mutually exclusive quest after finishing them.

In order to unlock this quest you must have already completed Biscuits for a Grandson and have Riki in your party. Zukazu and Jiroque's fight is approaching, and Zukazu has asked you to fetch him a Red Pollen Orb so that he can secure his victory. Once you have activated this quest, you will have the opportunity to activate Jiroque's quest, A Little Brother's Quest and you may only complete one or the other of these two quests. Should you choose to stay with A Big Brother's Fight, you may remember the Nopon, Zazadan, in Satorl Marsh who has Red Pollen Orbs. Head to Nopon Refuge north of the Glowing Obelisk landmark and retrieve a Red Pollen Orb from behind Zazadan. Return the Red Pollen Orb to Zukazu to complete the quest.

This quest must be completed in order to unlock the mutually exclusive quest, A Place to Come Home to.

This quest will expire if you complete Zukazu's quest, A Big Brother's Fight. You may only complete one or the other, and both quests have a mutually exclusive quest after finishing them.

In order to unlock this quest you must have already completed Biscuits for a Grandson and have Riki in your party. Zukazu and Jiroque's fight is approaching, and Zukazu has asked you to fetch him a Red Pollen Orb so that he can secure his victory however by informing Jiroque about Zukazu's request, you can help him instead. Should you choose to stay with A Little Brother's Fight, you may remember the Nopon, Zazadan, in Satorl Marsh who has Red Pollen Orbs. Head to Nopon Refuge north of the Glowing Obelisk landmark and retrieve a Red Pollen Orb from behind Zazadan. Return the Red Pollen Orb to Jiroque to complete the quest.

This quest must be completed in order to unlock the mutually exclusive quest, Thawing Relations.

A Place to Come Home to

This is a mutually exclusive quest, meaning you can only access it if you chose to complete A Big Brother's Fight instead of A Little Brother's Fight. Following their big fight, Zukazu has headed off on an adventure and Jiroque wants to make his bedroom nice for when he returns. He has aked you to get the following items to decorate with:

Once you have collected all the items, head back to Jiroque to complete the quest.

This is a mutually exclusive quest, meaning you can only access it if you chose to complete A Little Brother's Fight instead of A Big Brother's Fight. To begin with, Zukazu wants you to track down 3 lots of Maternal Armu Milk. You can track these down by defeating the Plain Armus found at Agora Shore to the east. Alternatively, if you're already at 4✰, you can simply Trade for them with Zukazu (which begs the question, why is he asking for them in the first place). Once you have this, make your way to Ether Light during the day and speak with Marcia to give her the milk and the Old Watch before returning to Zukazu at night to complete the Quest.