This quest can only be activated with Reyn as party leader because you unlock his fourth skill branch, Impatience, upon its completion.

After you have completed Missing Lodger and Cook-Off Final Blow?!, Ma'crish will offer this quest. However, she will only offer it if Reyn is party leader. After activating the quest, you will have to speak to Hoko, who will tell you to collect 2 Soya Paste Shells from Entma Kings on Valak Mountain. They are found commonly near the Mechonis Wound landmark and Chilkin Lair. Once you have the required materials, return to Hoko. He will tell you that he misses making his old, smelly food. You will then be asked to choose a route: 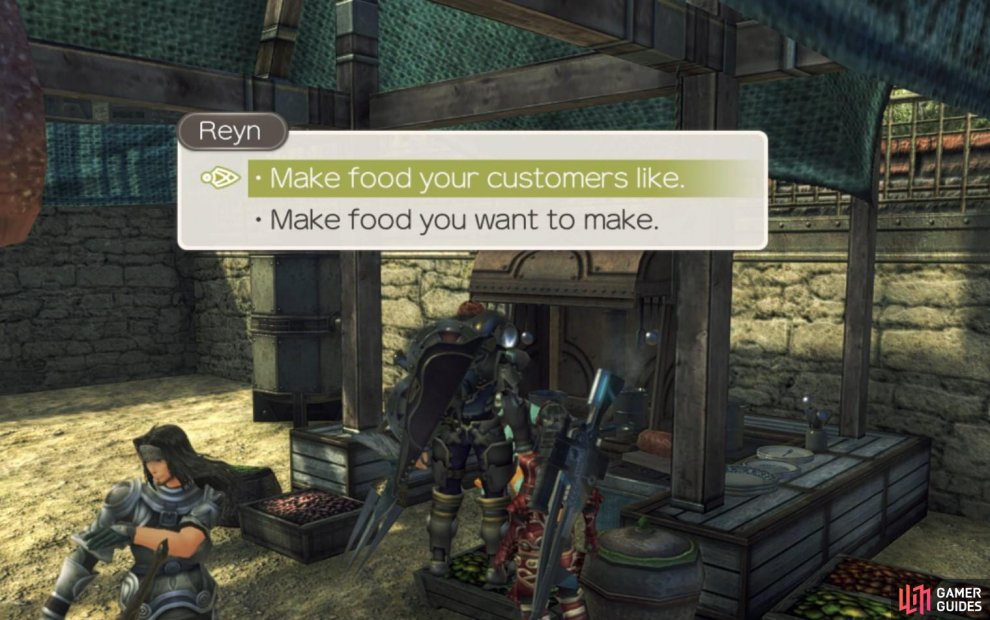 Once you have completed the quest, regardless of chosen route, you will unlock Reyn's fourth skill branch, Impatience. 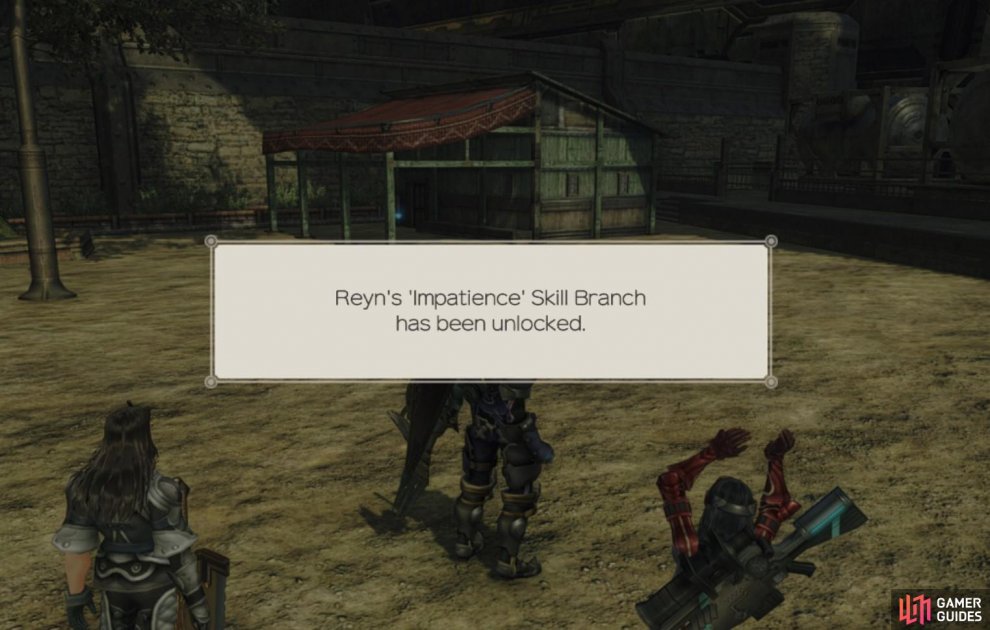 Once you have reached Valak Mountain and completed the quests, A Delectable Delicacy and Cook-Off Final Blow?!, you will be able to activate this quest from Pokapoka. He asks that you collect him 3 Pagul Cold Pies, which are dropped by Sparas Paguls on Valak Mountain. They are found specifically around Nagul Waterfall, which is southeast from the Mechonis Wound landmark. Once you have collected 3 of the Pagul Cold Pies, head back to Pokapoka to complete the quest.

To begin the quest chain that starts with Cursed Berryjammy, a number of prerequisites must be fulfilled. Firstly, Berryjammy (Frontier Village) and Mefimefi (Colony 9) must be invited to Colony 6, and to do this you must have completed Housing and Nature up to level 3. Reaching Level 3 in Nature is very difficult because you have to find 2 Ice Cabbages on Valak Mountain, which are one of the rarest collectables in the game. It is advised that you wait until Yura from Alcamoth has moved to Valak Mountain, because you will then be able to trade Ice Cabbages with him. Another important point to make here is that you cannot have both Perrine and Mefimefi move to Colony 6; it must be one or the other. If you choose Perrine, then you will receive the quest, Weak Berryjammy instead of Cursed Berryjammy (they are mutually exclusive). After you have invited Mefimefi, you can then invite Norara from Frontier Village. Norara is the one who will offer this quest, so it is important that you invite her.

Once all of the prerequisites have been satisfied, head over to Norara in Colony 6 to begin the quest. She will ask you to speak with Mefimefi about Berryjammy's illness. Mefimefi is active between 18:00 and 06:00 in the same area you found Norara. Mefimefi will tell you to collect a Statue Fragment from the Sororal Statues in Satorl Marsh. You will actually want to go to the Statue Summit landmark rather than Sororal Statues, and then descend the statue, the quest marker is west, so when you're making your way down make sure to go in that direction. When the female statue is in sight, walk onto her chest, near the Ether deposit and then jump down, aiming towards a narrow ledge. On that ledge you should find the Statue Fragment. Once you have it, head back to Mefimefi, who will then tell you to take it to Norara. Speaking to Norara will complete the quest. 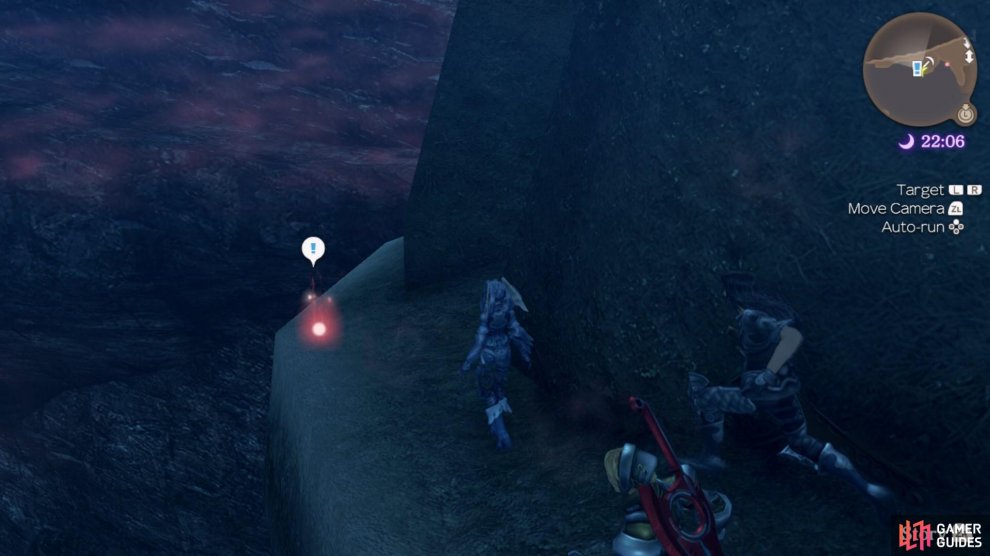 If you sent Perrine to Colony 6 over Mefimefi then Norara will offer this Quest instead. She mentions about Berryjammy's illness and asks if you can track some ingredients down to make some medicine. The Juicy Grapes are a Collectible that can be found in Makna Forest or you can trade for it with Puko at Frontier Village. The Thick Nectar can be found on Bionis' Leg as a drop from Leg Skeeters however you can trade for it with Nikita here in Colony 6. Once you have both sets of items, return to Norara to hand them over and complete the Quest.

After you have completed Weak Berryjammy or Cursed Berryjammy and reached 2✰ affinity with Colony 6 residents, Norara will offer this quest. She will tell you that Berryjammy isn't taking the medicine, and has asked that you help to convince her. Berryjammy is active between 18:00 and 03:00 just southwest of where Norara is found. When you find her, speak to her using Dunban to convince her to drink her medicine. Once you have spoken to her, head back to Norara to complete the quest.

This quest must be completed in order to unlock Berryjammy's quest, Unstoppable Berryjammy

After you have reached 3 affinity in Colony 6 and completed Chemist's Reopening and Obstinate Berryjammy, you will be able to pick this quest up from Berryjammy. She has been drinking her medicine as if it were juice. You have two routes that you may take here, though it would be advised that Route A is taken since you will receive more EXP from fighting enemies, and the affinity chart will be updated positively.

You can only accept one version of the Miss Sweetness Showdown Questline based on if you speak to Berryjammy or Ma'crish. This will lead to unique Quests for each client.

The Miss Sweetness contest of Colony 6 has just begun and Berryjammy has requested your assistance in the matter. Her request is for the "world's most transparent thing", the answer of which you can learn from The Most Transparent Thing Quest. The item in question is the Pure Ice Flower that can picked up at Url Crevasse on Valak Mountain. Return to Berryjammy with the item in question to complete the Quest.

The Most Transparent Thing

You'll receive this Quest at the same time as you accept either version of Miss Sweetness Showdown! and your chosen client will direct you to Lalapa in Frontier Village for more information. Head to the Chief's Residence at 09:00 to find Lalapa who will direct you to Dakuku at the Nopon Camp on Valak Mountain to complete the Quest.

There are a couple of prerequisites to fulfill before you will be able to access this quest. Firstly, you must have spoken to Miqol in the Hidden Machina Village. You must also have invited Jer'ell from Alcamoth to move to Colony 6 and to do this you need to have Housing at Level 4. Once you have been able to pick this quest up, Arda will ask you to speak to the owner of the home where smoke is coming from. You will then have to speak to Jer'ell outside of her home, but you can only do this at night. After speaking to Jer'ell, head back to Arda to complete the quest.

This quest must be completed in order to accept Odd Smoke - Resolution.

A few prerequisites need to be fulfilled before you may access this quest. Firstly, you must have completed Odd Smoke - Investigation. You need to also have invited Mefimefi or Perrine to Colony 6. Lastly, you must have a 2✰ affinity with the residents of Colony 6.

The source of all the smoke from Jer'ell's home is a broken machine. She has asked you to find the materials needed to repair it. She needs 3 Dated Plugs from old flying Mechon and 3 Dated Cranks from old scout Mechon. These enemies can both be found on the Fallen Arm. Scout Unit Prototypes can drop Dated Cranks, and they can be found around the Giant Mechon Debris landmark. M35 Prototypes can also be found in the same area, and they drop the Dated Plugs needed.

This quest and Homs Determination are mutually exclusive quests. Which quest you are able to access is dependent on who you asked to move to Colony 6 out of Mefimefi and Perrine.

After you have completed Odd Smoke - Resolution and reached 3✰ affinity with Colony 6 residents, you may pick this quest up from Mefimefi. She tells you that Jer'ell has insulted her intelligence. She asks you to fetch the following materials so that she can prove Jer'ell wrong!

Once you have all the required items, head back to Mefimefi to complete the quest.