Kofuko tells you his teeth are very bad and that he can only eat soft mushrooms now. He asks you to collect 8 Kelp Mushrooms in Makna Forest. You can either go out to the forest and find the collectables yourself, or you can head out to Nopon Tower and trade with Noranora. Once you have 8 Kelp Mushrooms head back to Kofuko to complete the quest.

Kokora has asked you to find someone to be her grampypon's friend. You're tasked with finding a Nopon that likes bugs. The Nopon you're looking for is Ababa (active 18:00 - 06:00). He can be found on the lower level near the Nopon Tower. When you have found him, he will ask you to collect 3 Shield Bugs from Makna Forest. Alternatively, you can trade for them with Miko if your affinity for Central Bionis is at 2✰. Once collected, head back to Ababa, then Kokora to complete the quest.

This quest must be completed in order to unlock Deki's quest, A Worried Bug Lover.

This quest will become available when you have completed Hunt for a Bug-Loving Friend and reached 1✰ affinity in Central Bionis. Deki has heard that Ababa likes to eat bugs! He wants to show him that eating bugs is bad by teaching him a lesson. He asks you to collect 2 lots of Green Eluca Juice from Makna Elucas. Makna Elucas are found across Makna Forest and you can find a few around Waypoint Beacon landmark in particular. Once collected, take the juice to Ababa. He will like the awful juice and once the interaction is over, head back to Deki to tell him your discovery and complete the quest. 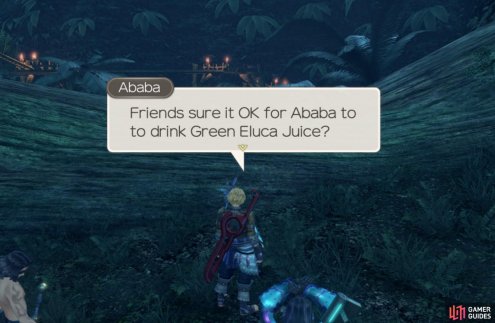 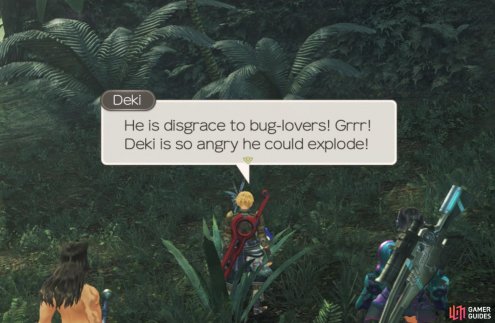 This quest must be completed in order to unlock Deki's second quest, A Tormented Bug-Lover, which can only be activated upon reaching Eryth Sea in the main quest.

Making a Mixer and Materials for a Mixer

When you accept the quest Making a Mixer from Rono (you must be controlling Shulk to get it), you will also accept the quest Materials for a Mixer, which needs to be completed in order to finish the first quest. Rono will ask you to make a Special Mixer for him.

For Materials for a Mixer you will need to collect 2 Generic Shafts from Mechon M64 units and 2 Generic Blades from Mechon M53 units. These can be found across the Bionis' Leg, and with any luck, you may have already picked up enough to complete this quest without having to go back. If not, then just head back out to Bionis' Leg and find some Mechon. There's quite a few near Maguel Road and the Raguel Bridge - South landmark. Once you have the parts, the Materials for a Mixer quest will be completed. Head over to the Weapon Dev. Lab in Colony 9 to use the materials to make the mixer for Rono. Once made, head back to Rono to give him the Special Mixer and complete the quest.

Leku tells you that his little sister, Kilaki is eating too much! He asks you to collect him 10 Peachy Leg Joints to help stop him getting into debt. They are dropped by Deinos, which can be found in abundance between the Waypoint Beacon and the Twisted Tree Gate. Peachy Leg Joints aren't a frequent drop though, so you might want to also trade for some of the items, so you don't have to spend ages farming Deinos. You can trade for Peachy Leg Joints with both Bana and Npa at 1✰ affinity. Once you have collected 10 Peachy Leg Joints, head back to Leku to complete the quest.

This quest must be completed in order to unlock Leku's second quest, Hunt for a Patron.

Hunt for a Patron

After completing Leku's Food Crisis, Leku asks you to ask the other vilagers for help. He tells you to talk to the cleverest Nopon, the strongest Nopon and the cutest Nopon. Lupa is the cleverest Nopon and she can be found at the Archaeology Centre from 18:00 to 06:00. Modamo is the strongest Nopon, and he can be found on the Archaeology Level from 18:00 to 06:00. Pepa is the cutest Nopon and she can be found near the Chief's Residence from 06:00 to 18:00. Once you have spoken to all of them, head back to Leku to complete the quest.

This quest must be completed in order to unlock Kilaki's quest, Heropon's Spirit.

Once you have helped out Leku, Kilaki will then give you a quest to fetch her 2 Tasty Ansel Wings so she can become Heropon. These can be obtained by defeating Ansels in Makna Forest. Alternatively, you could trade for some with Bana at 2✰ affinity. When you have the items, head back to Kilaki to complete the quest.

This quest must be completed in order to unlock Leku's third quest, Beat Kilaki to it!

After you have completed Kilaki's quest, Leku tells you she's gone to fight a big monster in Makna Forest. Leku asks you to beat her to the monster and defeat it before she gets there so she isn't hurt. The Unique monster, Obsessive Galgaron can be found in Hode Lair, which is a hidden, underground cave just south of Precipice Bridge. You can also only enter Hode Lair when you have activated this quest, since you need Kilaki's Note (the reward from Kilaki's quest) to unlock the wooden gates to the path that leads to Hode Lair. The wooden gate is slightly tricky to find, but essentially it is just south of the quest marker, down a wooded pathway. You will see two Orluga-type enemies flanking the gate. You will have to defeat them if they spot you, since they aggro on sight. Once defeated, head down the tunnel to the lair. The fight ahead is quite tough, as there are a lot of enemies as well as Obsessive Galgaron.

You can tactically control who you aggro! If you stay at the entrance to the lair and attack one of the non-unique Orluga enemies that flank the entrance then, if you're lucky, none of the other enemies there will go aggro and join the fight. You can do the same to the other non-unique Orluga enemy. And then, you can also defeat the several Hode enemies in the center of the lair. This tactic is all about positioning, make sure you're as far away from the other enemies as possible when you initiate fights. Once all the smaller enemies are killed, you can then focus on Obsessive Galgaron. This is guaranteed to be an easier fight than running straight for Obsessive Galgaron, as that aggros everyone. Once you have defeated the Unique enemy, head back to Leku in Frontier Village to complete the quest. 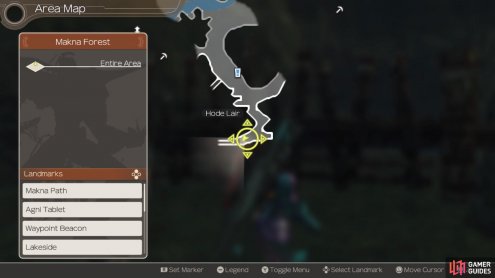 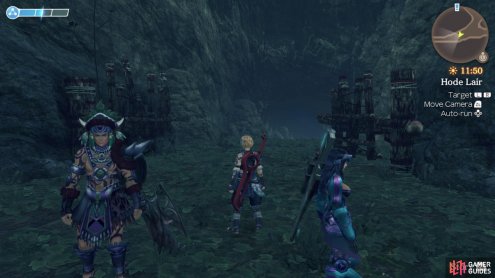 This quest must be completed in order to unlock Leku's fourth quest, Popularity Premonition.

After dealing with all of his sister's issues, Leku now wants to focus on himself! When he tells you he wants a wifeypon, Shulk has a vision showing both Pepa and Lupa are interested in Leku. He asks you to choose one of the ladies for him, since he cannot decide. This quest has two endings, depending on which girl you choose.

Dobadoba has asked that you head over to Yellow Flower Grove to fetch 5 bits of Yellow pollen. Yellow Flower grove is north of Glowmoss Trihenge, which is located in the eastern region of Makna Forest. When you arrive at the grove, several level 32 Makna Elucas will pop up out of the ground and guard the Yellow Pollen. You will have to defeat them (if you aren't 5 levels higher than them) in order to retrieve the items. Once collected, head back to the Pollen works in Frontier Village and talk to Dobadoba to complete the quest.

If you activate Rasha's quest, Disinsectization, you can complete both quests at once by slaying the Makna Elucas to retrieve the pollen.

This quest must be completed in order to unlock quests, Secret Ingredient Hunt and Secret Innovation.

Once you are at 1✰ affinity with the Central Bionis region, have Gadada registered on your affinity chart and have completed Pollen Orb Ingredients, you will be able to activate this quest from Bana. Bana will ask you to collect 1 Monster Egg from Makna Forest, specifically from around the Twisted Tree Gate landmark. You may see the red shiny orb that represents the Monster Egg from a lower level before you can actually reach it. To get to the elevated cliff level that the egg can be found on, head north through the Eks Watering Hole river until you reach the northside beach area. Then follow the path east then southeast until you have to jump down onto a lower level where the Monster Egg can be found. Once retrieved, take the Monster Egg to Gadada. He can be found near the Pollen Works landmark in Frontier Village during the day. Once you have given Gadada the Monster Egg, talk to Bana to complete the quest.

This quest must be completed in order to unlock Dobadoba's quest, The Master's Successor

Once you are at 1✰ affinity with the Central Bionis region, have Cherri registered on the affinity chart and have completed Pollen Orb Ingredients, Rasha will ask you to collect 1 Filtered Water from near the Sparkling Pool in Makna Forest. The Sparkling Pool is a Secret Area landmark, and it can be found by climbing up a large tree route from the Eks Watering Holeand heading south through the trees. The Filtered Water can only be found during the day. Once collected, take the water to Cherri as a gift from Rasha. She can be found near the Pollen Works landmark in Frontier Village during the day. Once you have given her the water, return to Rasha to complete the quest. 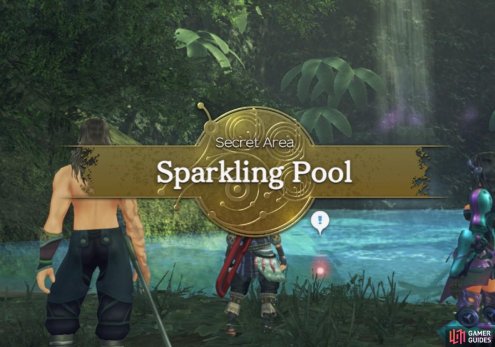 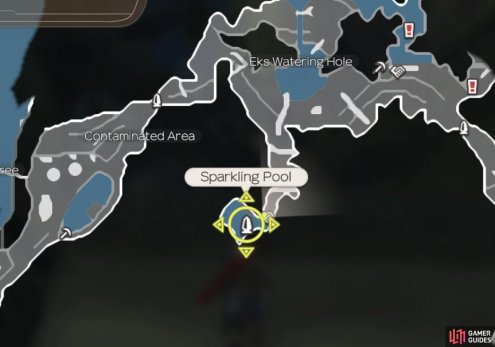 This quest must be completed in order to unlock Dobadoba's quest, The Master's Successor.

To activate this quest, you must have completed both Secret Innovation and Secret Ingredient Hunt, and also have an affinity of 2✰ in Central Bionis. Dobadoba has announced that he wants someone else to take over Pollen Works. He has asked you to choose between either Cherri or Gadada to be his successor. Firstly, you will need to talk to Gadada about his passions for the Pollen industry, then return to Dobadoba. After you've spoken to Dobadoba again, he will ask you to talk to Cherri about her ambitions. Head back to Dobadoba for a final time and he will ask you to make a decision about who should be his successor.

The two routes lead to two mutually exclusive quests that can be received later in the game.

Rasha has asked you to defeat 5 Makna Elucas in Yellow Flower Grove in Makna Forest because Cherri hates bugs. Although it specifies Yellow Flower Grove, defeating any Makna Elucas in Makna Forest will be fine. They are fairly common across the region so you won't have too much of an issue finding them. Once you've defeated 5 of them, head to Cherri in the Pollen Works area to tell her the bugs are gone. Then, return to Rasha to complete the quest.

If you have Dobadoba's quest, Pollen Orb Ingredients, activated then you can complete both quests at once by killing the Makna Elucas in Yellow Flower Grove in order to collect the pollen.