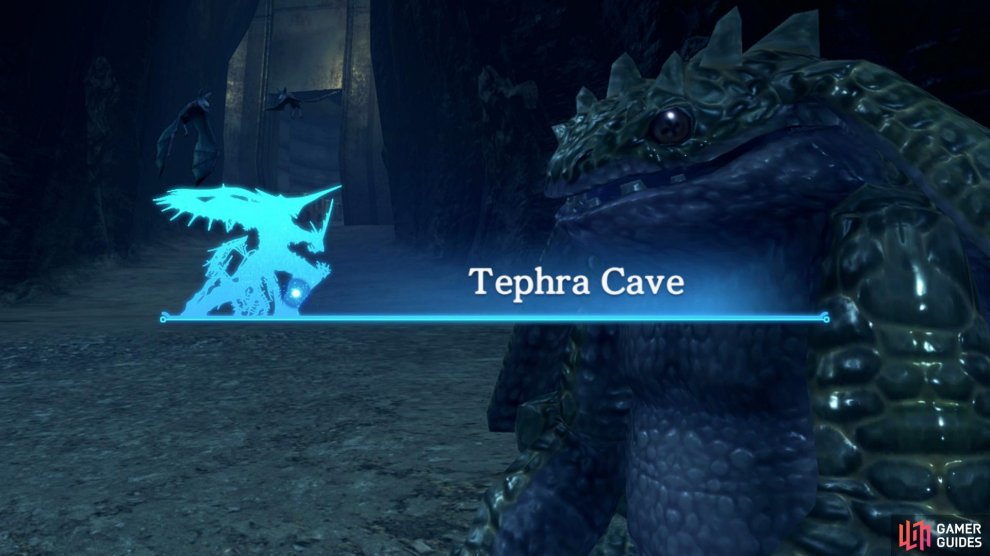 Upon entering the cave, you'll get a tutorial on all the different types of monsters. As you may have seen in Colony 9, many enemies won't attack you unless directly provoked however you may have spotted some, such as Brogs, who have an eye icon above their heads, this indicates they will Aggro you based on line of sight. You can also tell how difficult an enemy is based on the color of the target window ranging from black being the easiest and red being the most dangerous. For the most part, avoid Red at all costs and only engage Yellow if you're confident in your abilities.

Be sure to activate one of the many Quests you should have active in the Tephra Cave and then proceed down the path to the west where you'll encounter some Bunnivs including a Willow Bunniv, the target for [Monster Quest 4 - Part 1]. It can help in battle to focus your attacks on the same enemy, especially when there are multiple, do this by making use of Battle Commands. Take a look at your Collectopaedia page here too, you'll notice there's a whole new section to fill out so be on constant look out for them as you traverse the cavern.

As you continue along the path, you'll spot a side path to the west leading up but ignore it for now and you'll notice a group of Caterpiles and a Unique Monster, Cellar Bugworm will appear in the center. It's Level 10 and you'll want to be at least Level 12 yourself to stand any chance. Its main attack to watch out for is Toxin Shower that has the chance to inflict Poison on your party so be sure to save the game before attempting it.

Tip: This is a good opportunity to get used to the Lure command. When you target an enemy, press up on the directional buttons and selecting the Lure command. This will let you separate monsters from the pack leaving you less to deal with, ideal in situations such as this.

Should you manage to beat it, you might obtain some Heavy Armor for Reyn to finally make use of. Continue north to find some Singing Brogs, these are related to [Monster Quest 4 - Part 2], dispatch them and go back on yourself and take the eastern path to find another Unique Monster, Mining Patrichev, a Bunnit you should be able to dispatch if you was able to take down the Caterpile a moment ago. 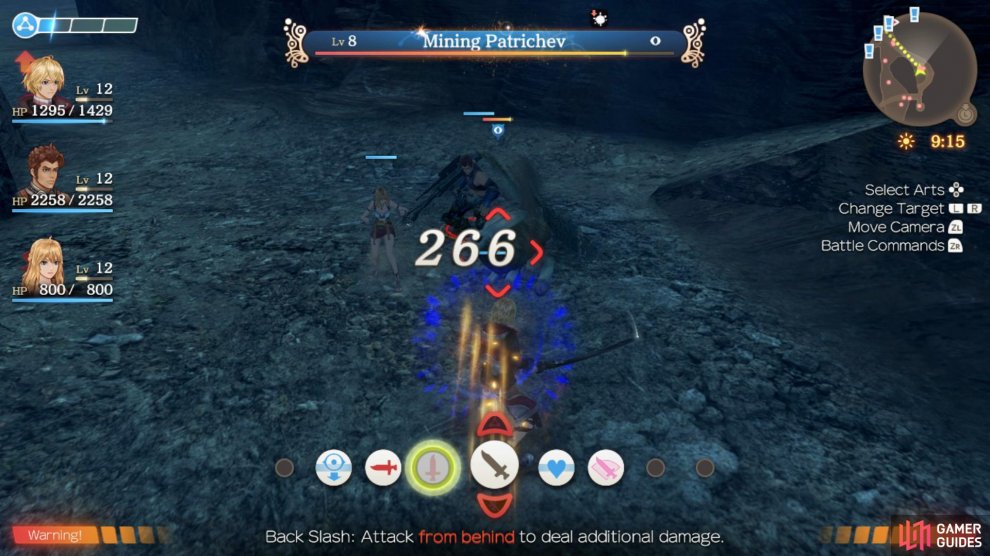 Note: The reason for taking out the Unique Monsters are plentiful. For one, they offer more EXP/AP/SP than regular enemies, they'll also always drop a Gold Chest with rare loot. Finally, every time you defeat an Unique Monster, you'll gain an Affinity Coin, this is tied to a system you'll unlock later in the adventure.

Make your way back to where you defeated the Brogs and search the western wall for a small crevice where you can find a collectable, usually a Shin Gecko, which is needed for Dean's Shady Request back in Colony 9. Continue along the path to the north to reach the Mag Mell Ruins Landmark.

Searching for the Cylinder Hangar

Following the cutscene, you'll find yourself in Warehouse 2 and another tutorial will pop up, this one detailing about Skip Travel, a feature you should've already made use of. The second piece of advice is welcome however, be sure to sell excess equipment at Shops, your Inventory has a limit (although it's a generous one) which will soon build up with excess equipment. When you're ready, take the ramp up to the upper level and then head east through the corridors where you'll encounter a group of Mell Lizard, all of which are needed for [Monster Quest 4 - Part 3]. While you're here, head south along this path to find Wallslide Gwynry, a Level 9 Unique Monster needed for the Challenge 4 Quest, this is another one that should be easy enough provided you're at least Level 11+. 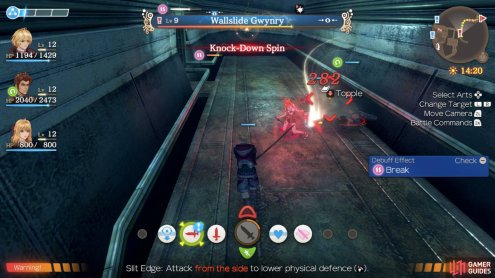 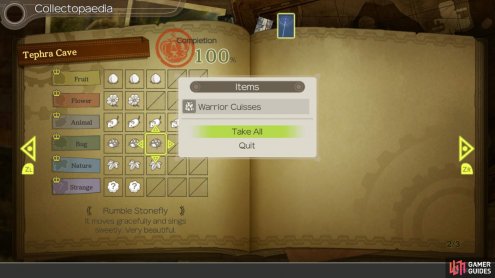 The exit lies to the north of this path but take the time to fill out the Collectopaedia before you exit the cave and find the Shin Geckos needed for the Quest mentioned earlier. You can reset the items in the area by leaving to Colony 9 and coming back in. For completing the Collectopaedia here you'll obtain the Warrior Cuisses. With the above achieved, leave Tephra Cave via the northern exit to return to Colony 9.

Expert Mode: Before you leave Tephra Cave and advance the story, be sure that your party is sitting around Levels 10-12.

Back at Colony 9's Cylinder Hangar, you'll find a Heart-to-Heart you're unable to activate and the hangar itself so head on in to trigger a cutscene. 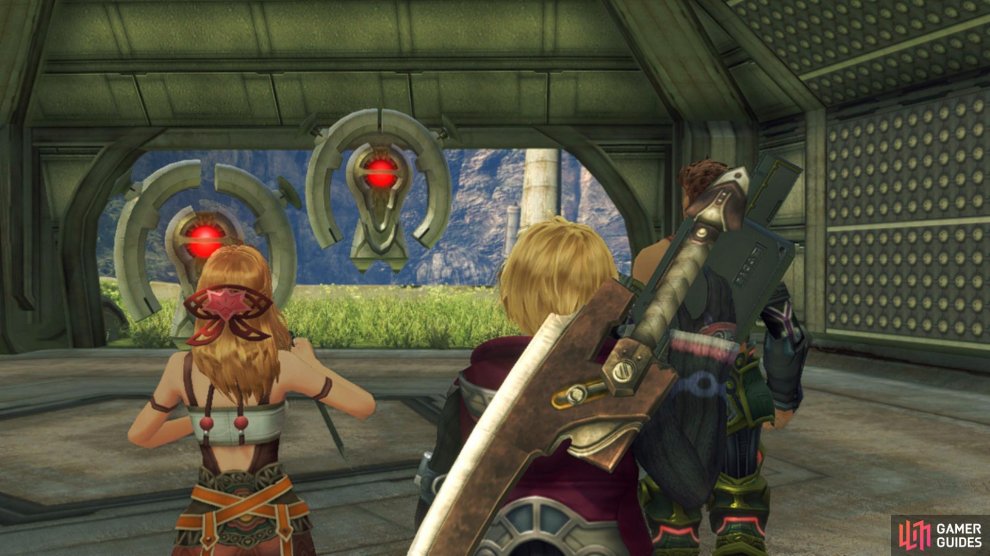 You'll be thrust into battle against two Lv 8 Ancient Machines and you'll be given a short tutorial on switching targets, something that you should already be putting to use. You'll also be formally introduced to Battle Commands, as mentioned earlier. In general, when fighting tougher enemies, you'll want to tell the party to focus attacks. Your foes shouldn't be too tough if you're around Level 10+ however beware for when they use Final Defense Mode near death, this will buff both their Speed and Strength so be sure to save some Arts for when this occurs. 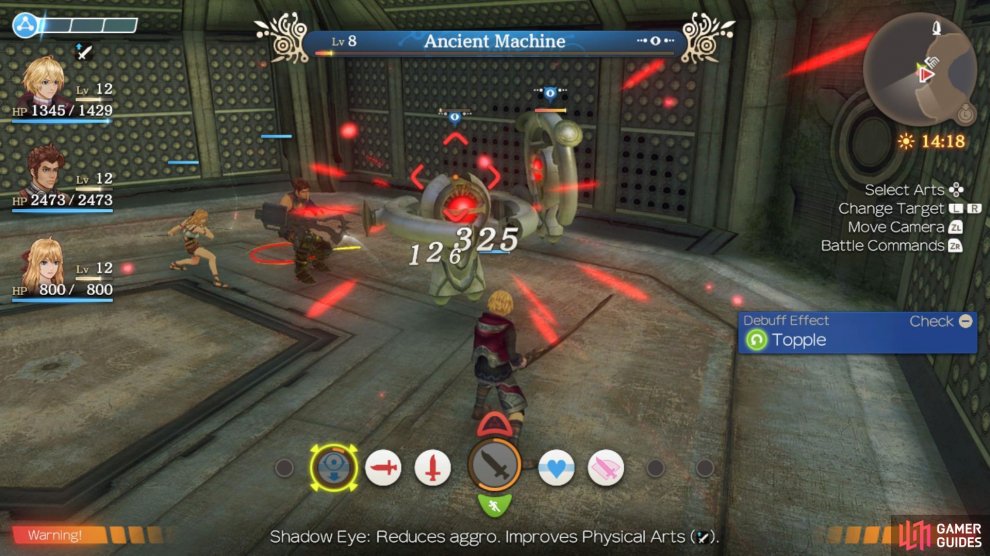 Following the battle, some more cutscenes will occur as Chapter One ends.