The Other Collection page isn't really an area, but is part of the Collectopaedia. You have this page available from the beginning of the game, but probably noticed you never got any of the items for it. The reason for that is because it requires you to trade for all of the items. The majority of the items can be traded by using items you pick up from your journey, but the trade values for the items required can be a bit high, at first.

Note: The items are listed in the exact order as you input them into the Collectopaedia, so it's easy to know which one(s) you are missing.

The Minute Mantis can be gotten from Sonia from Colony 9. She can be found in the Commercial District from 06:00 - 18:00 and in order to get this item, you need an Affinity of 3 with Colony 9. The trade cost for the Minute Mantis is 16,200G. 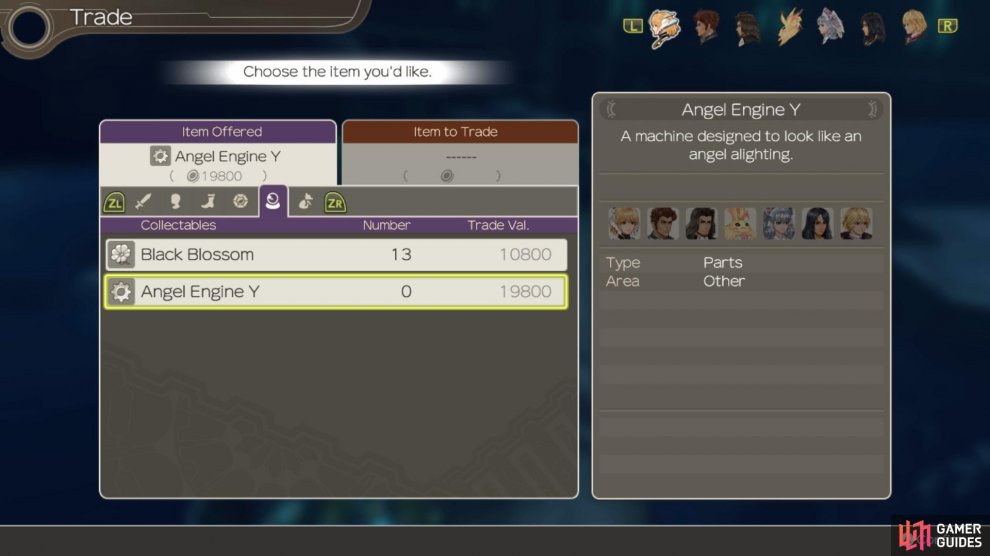 The Golden Cog can be gotten from Oleksiy, once he has been invited to Colony 6. In order to do this, you need both Housing and Special at level 4. He can be found near the base of the watertower between 15:00 and 0:00 and in order to get this item, you will need an Affinity of 3 with Colony 6. The trade cost for the Golden Cog is 16,200G.

The Angel Engine Y can be gotten from Rakzet from the Hidden Machina Village on Fallen Arm. He can be found southwest of Junks, sitting on the structure across some pipes. He is available most of the time, heading back to a building for like two to three hours. In order to get this item, you will need an Affinity of 3 with Fallen Arm. The trade cost for the Angel Engine Y is 19,800G.

The Coin of Fortune can be gotten from Ma'crish, once you have gotten her to migrate to Colony 6. At first, she is in Alcamoth, but later moves to the Refugee Camp on Bionis' Leg after a big story event. She is available from 06:00 to 18:00 in Colony 6. In order to get her to move to Colony 6, Housing must be at least level 2. When you've done that, you will need an Affinity of 3 with Colony 6. The trade cost for the Coin of Fortune is 27,000G.

The Love Source can be gotten from Jer'ell, once she has moved to Colony 6. At first, she is in Alcamoth, but will later move to the Satorl Marsh (by the statues) after the big story event. She will be available from 18:00 to 06:00 in Colony 6. To invite her to Colony 6, Housing must be at level 4, at least. This item is a bit different than the others, as not only do you need to have 5 Affinity with Colony 6, but the trade value is a staggering 56,250G. There is only a single item in the game that can be traded for it, which is the Veritas Glyph, an item which drops from one of the five superbosses (basically, any Unique Monster level 100+).

Just obtaining one of these won't do, though, as there are two other things you need. Those are Hero's Privilege from Shulk's Bravery skill tree, as well as Friends Now! from Riki's Vivacity skill tree. Riki's skill is from one of his initial skill trees, but Shulk's is from his fifth one, which is unlocked after completing either A Young Captain's Trust or A Young Captain's Revival (they are mutually exclusive, so you will only have one of these available).