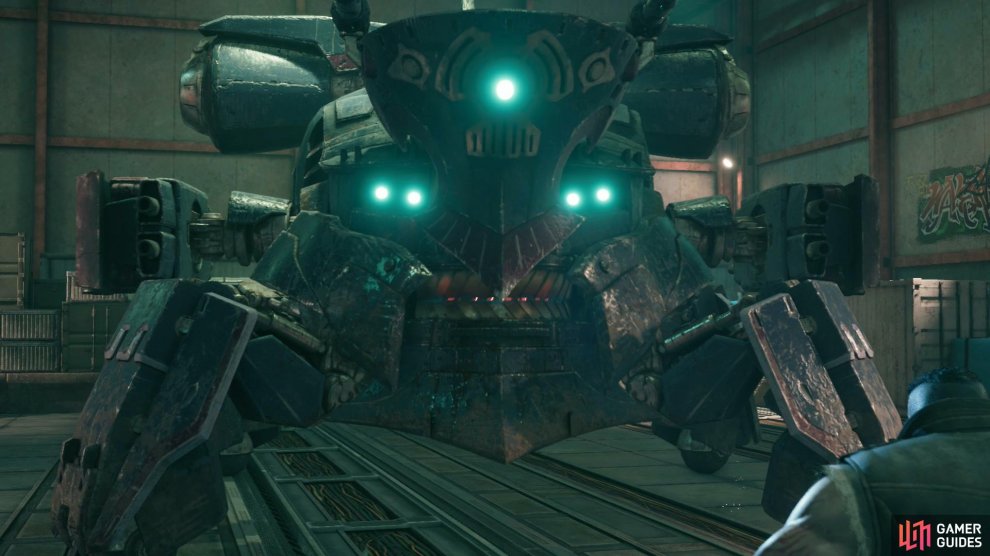 Crab Warden hasn't changed much since the last time you fought him - his damage and HP scale pretty well with what gains you've made since the first time, save now you have more MP to throw around and can use Fire + Elemental to mitigate two of Crab Warden's attacks ("Flamethrower" and "Wildfire"). Healing + Magnify was sufficient to keep everybody's HP up, Lightning Materia was useful for attacking both the boss and the Slug-Rays it summoned. Its early attacks are as follows:

By this point in time we could just have Cloud cast Regen + Magnify on the party and idle. Obviously you don't want to do this if you plan to win a timely manner, but it illustrates how weak this boss can be. Target its legs with Thunder and "Maximum Fury", and once it's Staggered, punish its now-exposed "Generator" until its HP bar has been whittled down to 2/3rds, at which it'll begin phase two.

At the start of this phase, Crab Warden spawns some Slug-Rays. Hit them with Thunder to quickly take them out, then focus on Crab Warden again, which fights nearly identically to how it did in phase one, save it'll use "Air Support" to summon more Slug-Rays if enough time passes. It can also shoot concentrated bursts of fire from its two main guns, which collectively will deal tremendous damage. After all four legs are destroyed, switch your focus to attacking the "Right/Left Auxiliary Weaponry", hitting them with Thunder and "Maximum Fury" until Crab Warden is Staggered again.

Phase three starts when Crab Warden is reduced to 1/3rd of its HP bar, and it actually gets somewhat dangerous here, as it'll pick up the pace and use its ultimate attack "Surge". It takes a while to charge up, during which time you'll need to stand on the concrete tiles between the rails to avoid damage. You'll really want to avoid this, as it can hit for over 4,000 damage. Otherwise its only new attack is "Charge", which, of course, is a charge attack.

Focus on destroying the "Right/Left Auxiliary Weaponry" and when Crab Warden is Staggered you'll note that it'll recover unusually quickly, allowing the game to introduce the "Pilot" - your next target. Once the "Pilot" is destroyed (use Thunder and "Maximum Fury", as usual" the Generator will remain exposed until the boss is defeated.