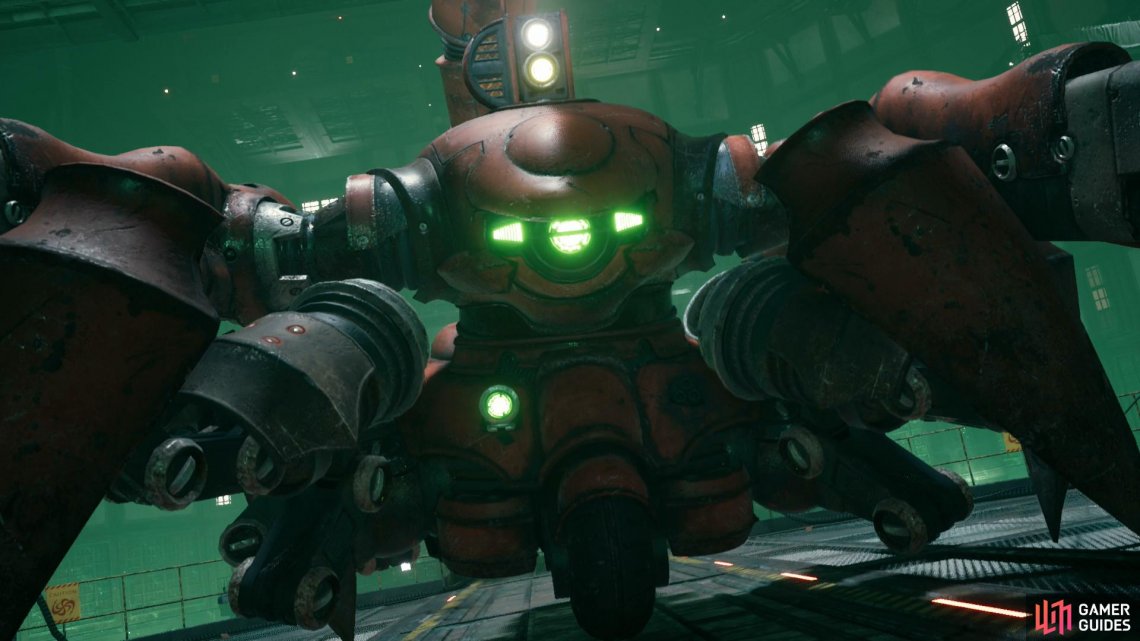 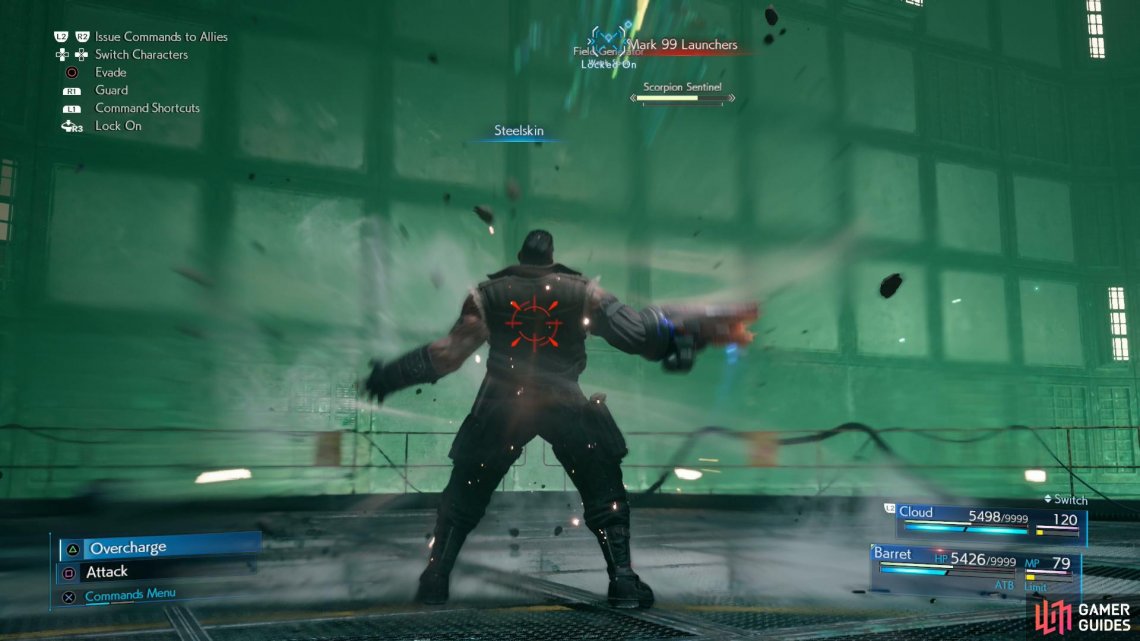 (1 of 3) “Steelskin” will mitigate damage and interruption,

Before you fight this boss, you should prepare your materia: Healing + Magnify, Lightning + Elemental on your weapon (for more damage) or armor (for more defense) is a good idea. In the latter case you’ll resist/negate/absorb damage from some of the Scorpion Sentinel’s attacks, including “EM Field”, “Tail Swipe” and “Scorpion Strikes”. Revive, Chakra, ATB Stagger, Magic Up and perhaps HP Up are also useful.

Once the fight begins, you’ll find that little has changed. Scorpion Sentinel deals a lot more damage, but you also have quite a bit more HP - the Scorpion Sentinel’s damage output and your HP gain don’t quite equal out, but the balance hasn’t shifted too much. You have a lot more MP as well, so you should be more free with Thunder this time around, and if you find yourself wounded, don’t by shy about having Cloud use Curaga + Magnify.

We stuck with Barret at the start of the fight, using “Overpower” when it was charged and Thunder whenever we had a spare ATB segment. When the Scorpion Sentinel was “Pressured” we switched to Cloud and used “Focused Thrust”. This should be enough to drive Scorpion Sentinel to phase two. 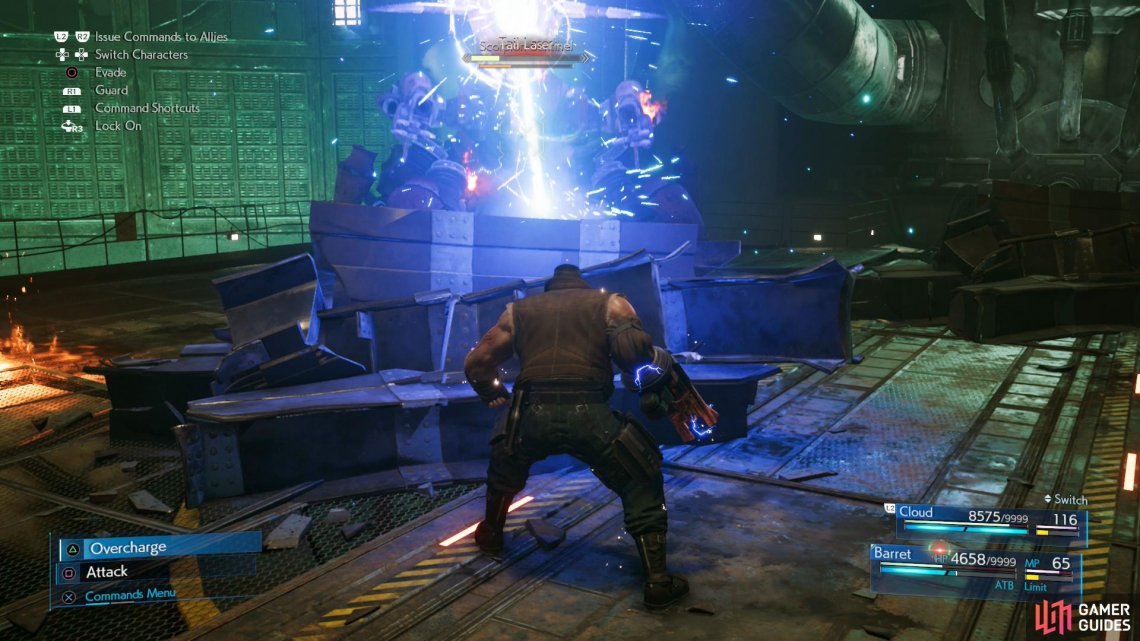 You’ll benefit from a few changes in tactics during phase two, as Scorpion Sentinel is more aggressive here. With its barrier up you have little choice but to control Cloud and attack its Field Generator. Use Barret’s “Lifesaver” regularly to soak damage for Cloud, and when Scorpion Sentinel leaps to the wall, switch to Barret and use “Steelskin” to reduce damage and mitigate interruption. Heal as needed, but otherwise once the barrier is down you’re free to keep damaging Scorpion Sentinel normally.

Phase three starts with the classic “Tail Laser”, save this time Scorpion Sentinel will fire two in a row. Get behind the first bit of cover, and after it’s destroyed, seek sheltered behind some more rubble to avoid the second. Other than this, the third phase is pretty standard. We keep control of Barret, using “Steelskin” for protection and resilience to interruption, while we remotely command Cloud to cast Thunder (or use “Focused Thrust”, if Scorpion Sentinel is “Pressured”) whenever he gets two ATB segments (the first ATB segment is reserved for Curaga, if needed). 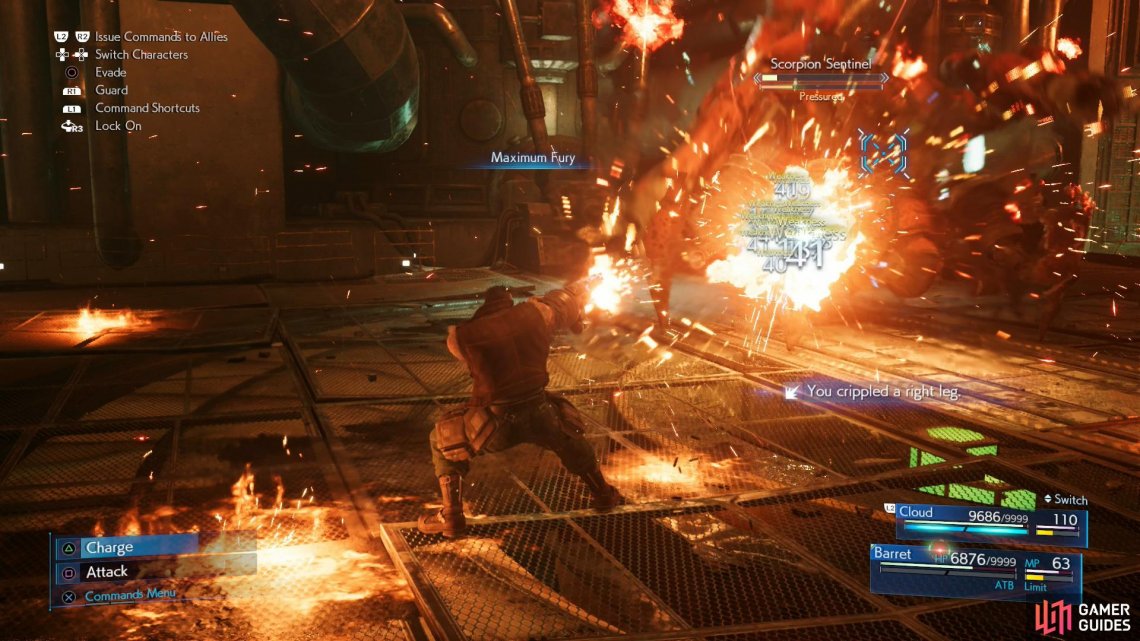 (1 of 2) Barret’s “Maximum Fury” ability will make it much easier to take out specific enemy parts. 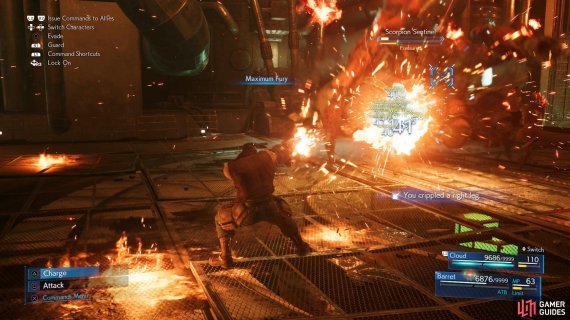 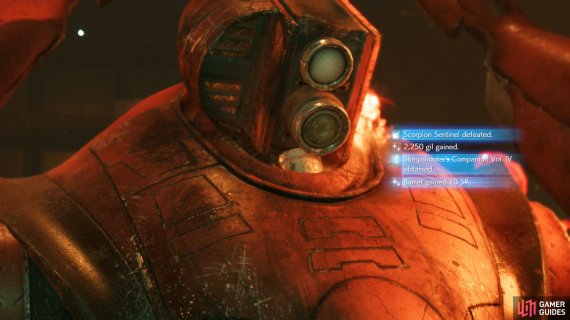 At the start of phase four, keep controlling Barret and have him target Scorpion Sentinel’s legs with “Maximum Fury”, which should quickly destroy them. Scorpion Sentinel is quite aggressive here, so “Steelskin” will prove even more useful, as will Manawall (Barrier Materia), although we didn’t find the latter strictly necessary. Once the legs are destroyed, switch to Cloud, use “Focused Thrust” to inflict Stagger, then finish Scorpion Sentinel off.

All in all, a level 50 party with decent materia probably won’t have any more trouble with this fight than they did the first time through the game. For defeating Scorpion Sentinel on hard difficulty you’ll acquire the Sharpshooter’s Companion Vol. IV Manuscript for defeating the Scorpion Sentinel on hard difficulty, which may earn you enough SP for Barret to hit Weapon Level 6.