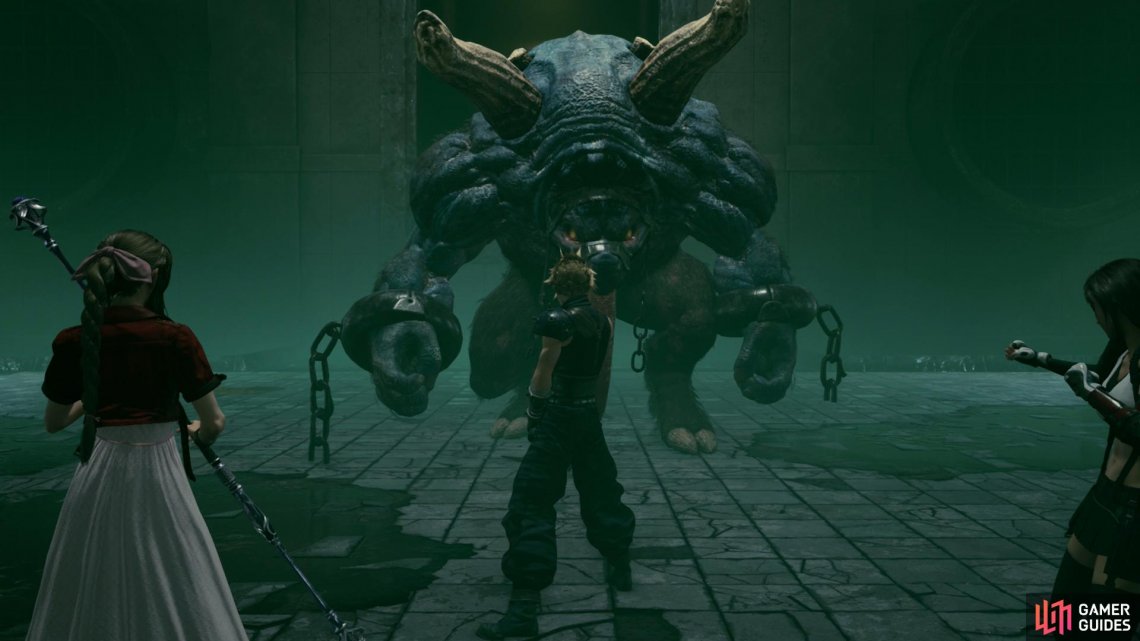 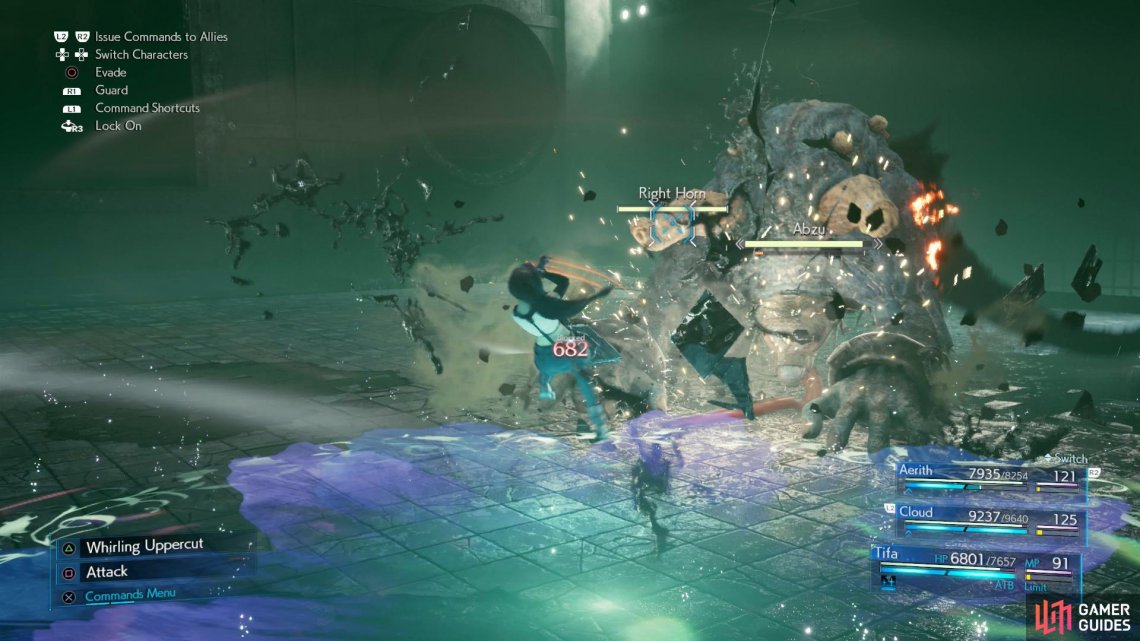 (1 of 3) Abzu will start out mostly relying on his physical attacks.

Abzu in Hard difficulty hasn’t changed all that much from Normal difficulty - he’s certainly no Hell House, anyways. Fire worked well in Normal difficulty and it’ll work well in Hard difficulty. In fact, it’s one of the few fights where strapping Fire + Elemental to your weapons makes sense. Abzu has no elemental attacks, but he can inflict “Poison” by various means, so Star Pendants will make this fight significantly easier. Other than that, have Aerith equip Healing + Magnify to take care of any damage and you should be well prepared for Abzu. Oh, and make sure somebody has Ifrit. Should all but guarantee you victory.

To start with, Abzu has the following familiar attacks:

Start out the fight by having Aerith drop an “Arcane Ward” and casting Regen on everybody, then rotate characters to make sure their ATB gauges are full - try to keep an ATB segment on every character whenever possible, as it’ll allow you to react to Abzu better. As for Cloud and Tifa, you can just block and counter Abzu’s attacks via Punisher mode (save for perhaps “Charge” and “Bash and Smash”, as these may do more damage than you want to take on) and use “Triple Slash” and Tifa’s ki abilities whenever they have two ATB segments. Don’t worry about Staggering Abzu here, as the first phase will quickly be over.

As in the first fight, if Abzu climbs onto the walls pelt him with Fire. Make use of Aerith’s “Arcane Ward” if possible, and hit Abzu with multiple characters to ensure you deal enough damage to dislodge him; this is the reason you’re being conservative with your ATB segments, after all. If you fail, he’ll target a character (usually the one you’re controlling) with “Pounce”, which can be dodged by running sideways as soon as Abzu vaults from the wall. If he hits he’ll inflict “Bound” and will follow up with a series of attacks on the helpless character - cast Curaga to heal them as they’re being attacked, as they’ll certainly need the healing. If you dislodge Abzu from the walls he’ll be “Pressured” and you’ll get a generous period of time to inflict punishment on him. 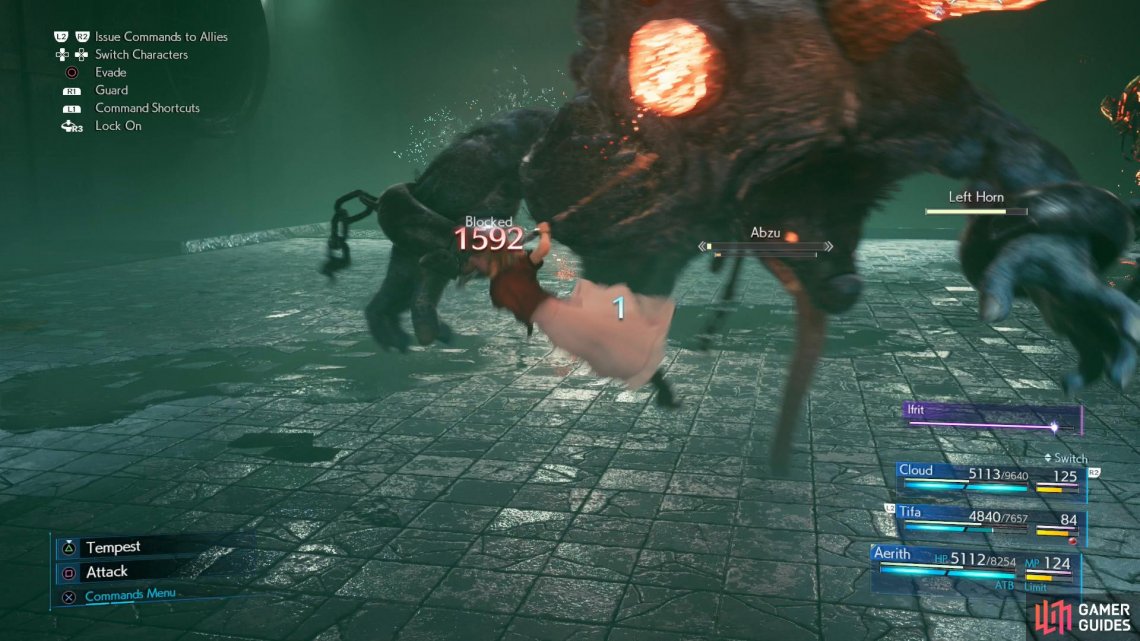 (1 of 3) Abzu will increase in ferocity when reduced to 75% or so of his HP, using extended versions of attacks like “Triple Charge”.

Unlike in the Normal difficulty fight, Abzu will use “Enrage” when his HP are reduced to around 75% and move into his second - and surprisingly last - phase. Abzu will gain a few new attacks this phase (see below), and will generally be more aggressive, but the new attack worth watching out for is “Blackwater Blast”, which will cause a gout of toxic water to discharge from one of the sewer pipes on each corner of the battlefield. The pipe from which this fetid fluid will flow will glow, so stand near the non-glowing pipe perpendicular to - not opposite from - the glowing pipe. You really don’t want to get hit by this, as it can inflict upwards of 5,000 damage.

Despite Abzu’s increased lethality, you’ll want to carry on this phase of the fight just like last phase. Use “Triple Slash” and ki strikes whenever Cloud and Tifa have two ATB segments, use Aerith to buff and heal, and whenever Abzu jumps on the wall, be wary of the glowing pipe and try to dislodge Abzu with Fire, in that order. His wall jumps may well be preludes to “Blackwater Blast” and/or “Pounce” attacks, so you’ll need to be wary. You can also target Abzu’s horns, as damaging them can “Pressure” Abzu, and destroying one will leave him vulnerable for a considerable length of time.

As Abzu’s HP gauge nears 25%, enough time will likely pass for the summon gauge to start filling. When full, call on Ifrit and use his “Crimson Dive” ability repeatedly, as each attack will likely deals several thousand damage to Abzu. If Abzu somehow survives this onslaught, Ifrit’s parting “Hellfire” will almost certainly do Abzu in.