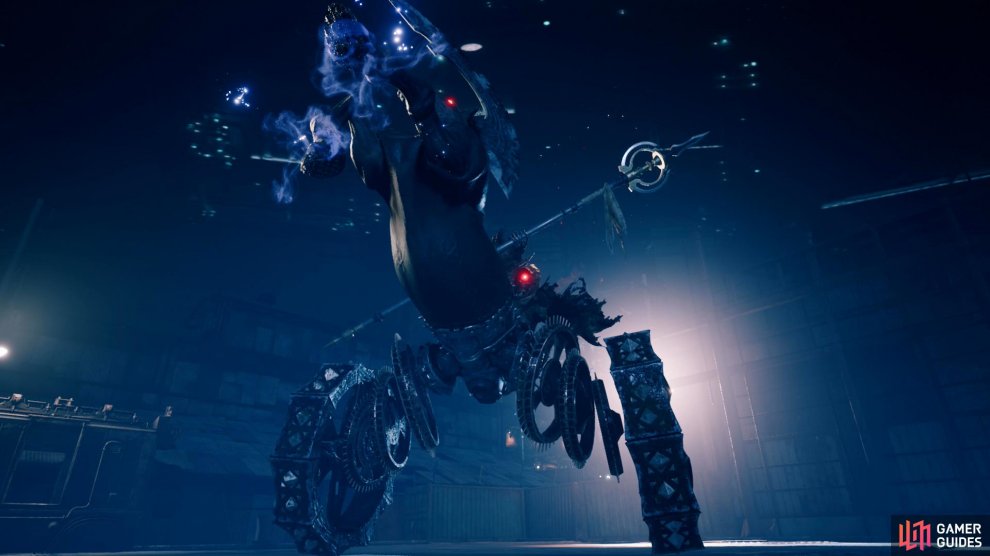 Eligor has always been a tedious boss for a variety of reasons. It's weak to ice, which is a notoriously fickle spell, Eligor doesn't use elemental attacks, so there's no way for you to scam healing out of it via Elemental Materia, it likes to fly around, and aerial combat is always a chore, and Eligor's attacks can inflict "Sleep" and "Silence". In the latter case, you've little choice but to mitigate this threat - you probably won't get very far if Eligor can put your characters to Sleep. Silence is more nuanced - it's annoying, but you really only need to prevent it on your top caster. Binding + Warding on Aerith will take care of both worries, while Tifa and Cloud can settle for Headband accessories.

The most obnoxious new feature in Hard difficulty is that Eligor's phase two "Reflect" will now affect the party as well as himself. His own Reflect will wear out rather quickly, but your own Reflect is permanent. Well... almost permanent, but we'll get to that later. A classic Final Fantasy spell, Reflect changes the target of the spell - casting an offensive spell on an enemy will Reflect will harm the caster, and casting a healing spell on yourself with Reflect on will heal the enemy. Of course, the key strategic limitation of Reflect is that spells will only bounce once, so if you cast offensive magic on yourself or healing magic on the enemy, it'll bounce to its intended target... only in Final Fantasy VII Remake, you lack the ability to target allies with offensive magic, or enemies with healing magic (in most cases), so having Reflect on your party will mean that you cannot buff or heal. There are two ways around this: Equip everybody with Chakra and use it to heal, wasting numerous ATB segments (not to mention a materia slot) or keep Revive Materia handy, swallow your pride, and be willing to engage in a little "strategic dying".

Other preparations include Ice + Elemental on Cloud and Tifa's weapons and make sure somebody has Poison Materia equipped. We also have Aerith equip Healing + Magnify - we don't intend to be hindered by Reflect for too long.

Start out the fight by casting Bio on Eligor. He's vulnerable to "Poison" and you'll really, really want that damage ticking away, especially in phase two. Next, charge Aerith's ATB and use Regen on the party - you'll also want this for phase two. After that, engage Eligor with either Cloud or Tifa, and when he's distracted and stationary, have Aerith hit Eligor with Blizzara to deal hefty damage and sending Eligor into a "Pressured" status. Have Cloud and Tifa Stagger Eligor, then crank out as much damage as possible - the closer you get Eligor's HP to 50%, the better, although he'll change phases around 75%, so your performance here can significantly impact the next phase of the battle.

Speaking of which, when reduced to around 75% of his HP, Eligor will start phase two, a phase defined by Eligor's aerial rounds and his newfound desire to spam "Reflect" on himself and the party. This latter bit is really annoying as it'll prevent you from healing or buffing yourself. Miscast a Regen and it will heal Eligor fully over the course of time - you really don't want that. Fortunately Eligor's own Reflect will wear off rather quickly, and although he'll recast it, you really shouldn't need to worry about it. In addition, Eligor will use several new attacks:

The trick to this phase is reducing Eligor's HP down to 50% as quickly as possible. If you cast Bio last round, Eligor should remain effected by "Poison", which can do a significant amount of the work for you (although you'll need to score the final bit of damage yourself to send him into phase three). Of course, who wants to just wait around? Take control of Tifa and chase Eligor, and the moment he goes to use any named attack, unleash a normal aerial combo on him. Striking him with a full combo should force him to the ground. It sounds simple, but it works. Once he's grounded, have Aerith set up an "Arcane Ward" and get her to cast Blizzara - do this remotely via commands while you attack Eligor with Cloud or Tifa. Once Eligor is struck by these spells, he may become "Pressured"; immediately switch to Cloud and hit Eligor with a second round of Blizzara the moment Eligor is struck by Aerith's spells. Staggering Eligor would be nice, and we've had a double-shot of Blizzara do it before, but mostly you're trying to deal damage. If you can't manage to send Eligor into phase three, don't worry, just repeat the above process.

Eligor will take off into the skies again to start phase three, but he fortunately fights most of it on the ground. He also won't use Reflect anymore, either, opting instead to ride around the perimeter of the battlefield and swing his scythe, stopping to use "Sweeping Gaze", "Javelin Bolts" and this phase's sole new attack:

Before you worry about defeating Eligor, you should consider how you want to deal with Reflect. Between his aforementioned attacks (and the persistent "Javelin Drop"), Eligor can dish out some serious damage, but his riding scythe attack can't hit you in corners or if you stay in the middle of the battlefield, and most of his other attacks are easy to avoid, leaving only his lasers as sources of significant, recurring damage. You can probably stay alive just by using Chakra when necessary, but there's another option: wait until you have a character who is unsilenced and capable of casting Raise (they have both the MP and an ATB bar) then run another character into Eligor's attacks. When they die, revive them. Boom, no more Reflect. Repeat this process with all three characters, and when they've all been KO'd and recovered, buff the party with Regen.

Given Eligor's offense, you should have the fight in the bag at this point - he's just not dangerous enough to kill a party that can fully heal for 9 MP (Aerith is just great). You now have to ways to go about beating him: wait for him to use a named attack and cast Blizzara (ideally two, courtesy of "Arcane Ward") to whittle down Eligor's HP, or attack the wheels. For whatever reason, Tifa's attacks don't do much here, but Cloud and Aerith can, with some time, destroy a wheel. We opt to use Aerith - it takes some time, but she can stand in the middle of the battlefield (for the right wheel) and the corners (for the left) and take them down relatively safely. Once both wheels are destroyed, Eligor will be Staggered. Throw the kitchen sink at him, and if he's still alive when he comes out of Stagger, use Shiva to finish him off.

For defeating Eligor in Hard difficulty you'll obtain the Way of the Fist Vol. VIII Manuscript.