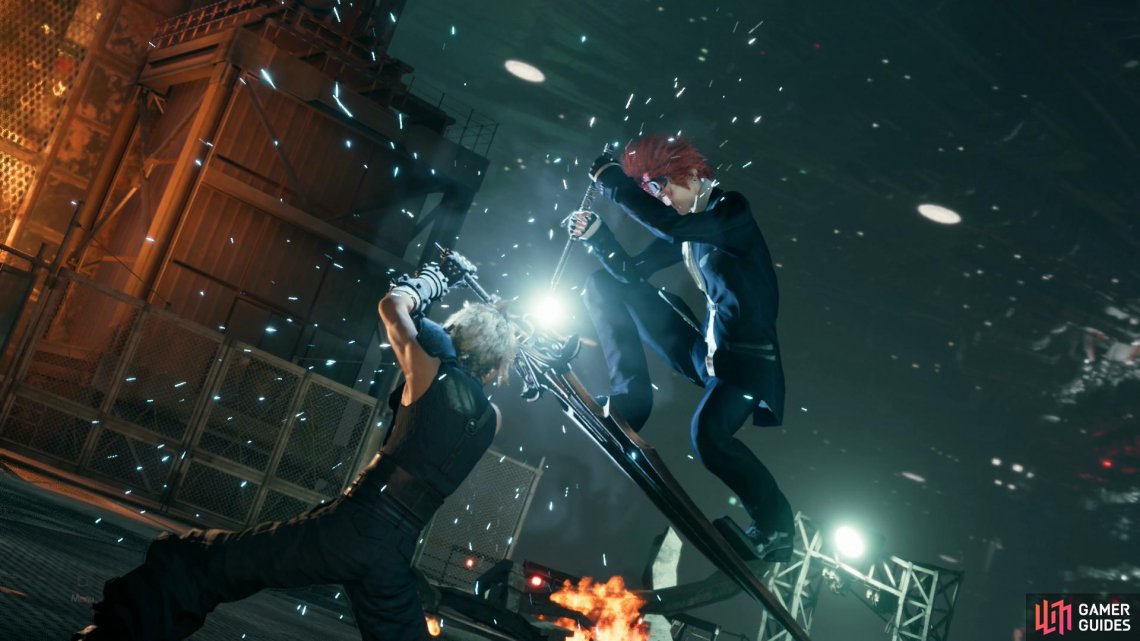 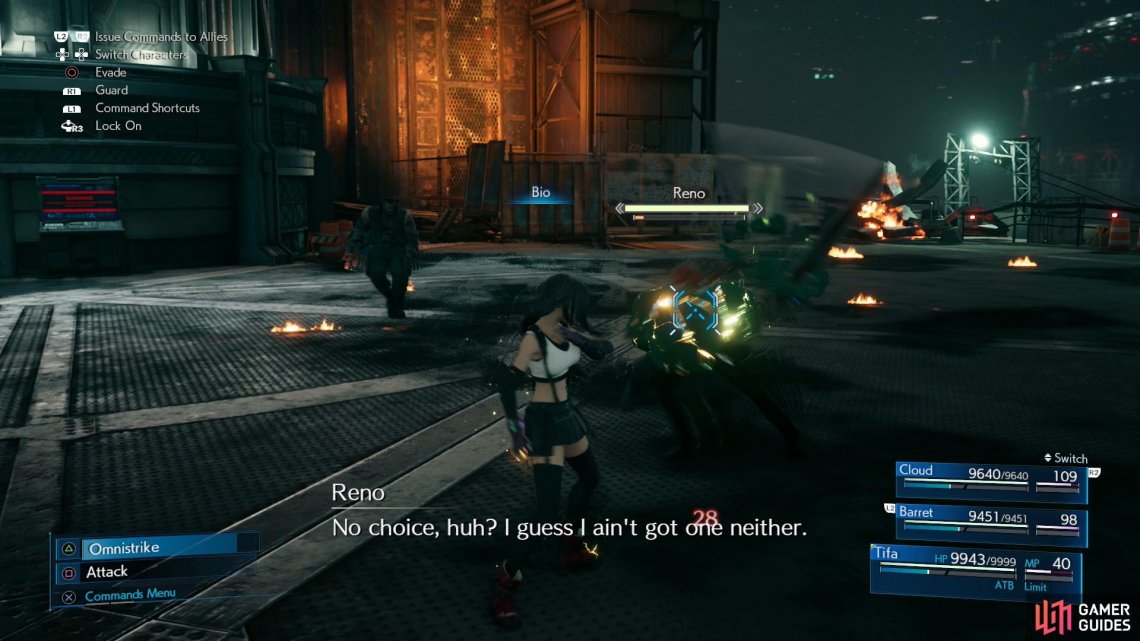 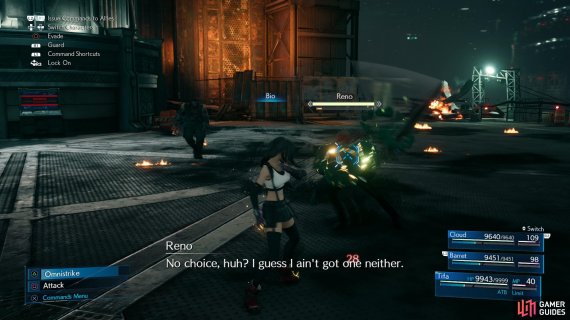 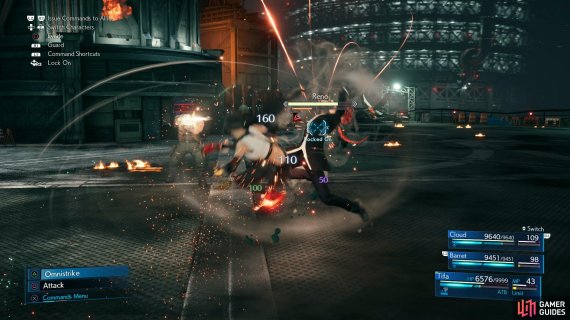 Hit Reno with Bio at the start of the fight. (left), Dodge his attacks, and when he leaves himself open, hit him with Tifa’s ki abilities. (right)

We had been dreading this fight in Hard difficulty, but honestly, it’s not that bad… if you prepare. Reno and Rude were bother enough in Normal difficulty, but we’ve got far more materia options at our disposal this time around, and there’s no reason to not make use of these options. First, Bio is as effective as ever, but you’ve also got access to more powerful levels of materia you might not have had before: Binding Materia and Time Materia. The former can be used to inflict “Sleep” and the latter “Stop”. Stop is fairly MP-intensive, but it’ll buy you enough time to unload all your ATB segments on a target, if you’re quick. A Tifa combination of “Starshower”, “Rise and Fall” and “Omnistrike” can deal grievous damage to Reno and Rude, and if you remotely command Cloud to use “Triple Slash” and Barret to use “Maximum Fury”, you could be effectively ending a phase in one flurry of glorious violence. Sleep is cheaper, MP-wise, but the target will wake up if you attack, so it’s best used in phase three to neutralize the tandem attacks of Reno and Rude.

Reno, just like in Normal difficulty, has changed up his tactics after his disastrous scuffle with Cloud in Chapter 8. He’ll now move further after and during attacks, making it much more difficult for Cloud to counterattack. Tifa’s a better choice, as she can easily dodge Reno’s attacks and get in some cheap hits of her own afterwards, building up her ATB. With good timing she can even sneak in a quick “Omnistrike”. Reno’s HP aren’t great, and if you swap characters to build up their ATB you can deal significant damage to Reno in a short amount of time. While Stop will allow you to do this more easily, the spell seems to have diminishing returns, and if you use it now, it may not be effective later on. 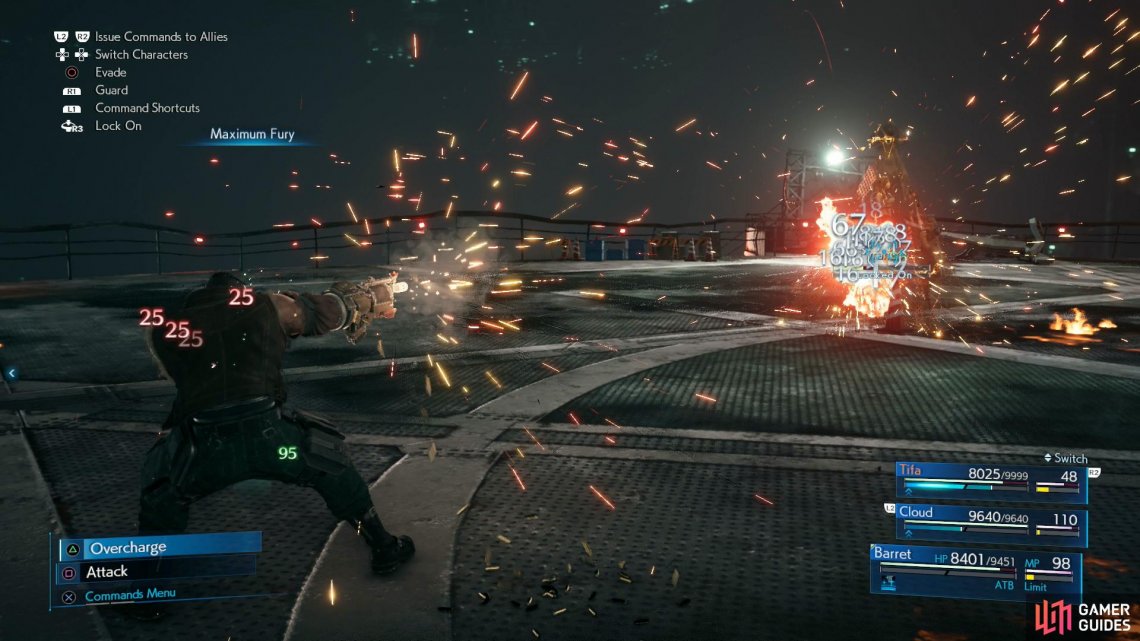 (1 of 2) In phase two, Reno will use his “Pyramid” attack to trap a character - destroy the Pyramid to free them. 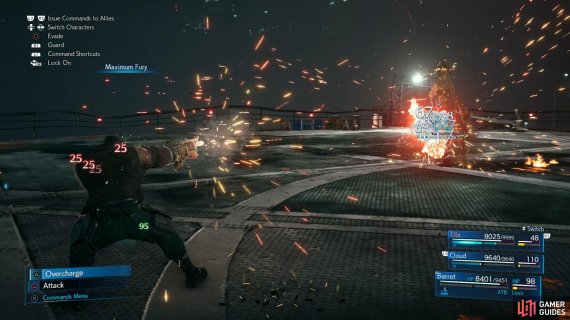 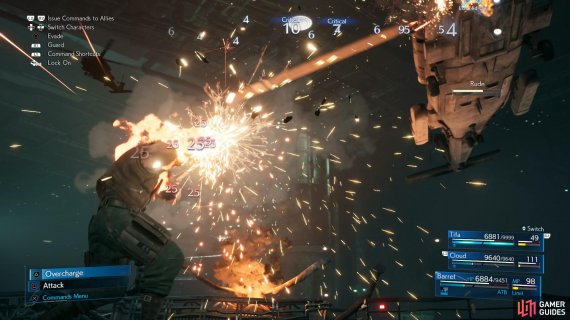 In phase two, Reno will use his “Pyramid” attack to trap a character - destroy the Pyramid to free them. (left), After Reno takes a knee, shoot down Rude. (right)

Instead, just take advantage of the AI’s focus on the controlled character. Cloud and Barret can be great spoiler characters when given the command to use “Triple Slash” or “Maximum Fury”, which can stun Reno long enough for Tifa to get in an “Omnistrike” or even a “Rise and Fall”/“Omnistrike” combo. Keep up the pressure, whittle down Reno’s HP with the aforementioned attacks (and perhaps “Poison”) and once he’s injured enough he’ll move to phase two - after a relatively uneventful bombing run by Rude - which plays out very similarly save for the addition of his “Pyramid” attack. Reno’s attacks are as follows: 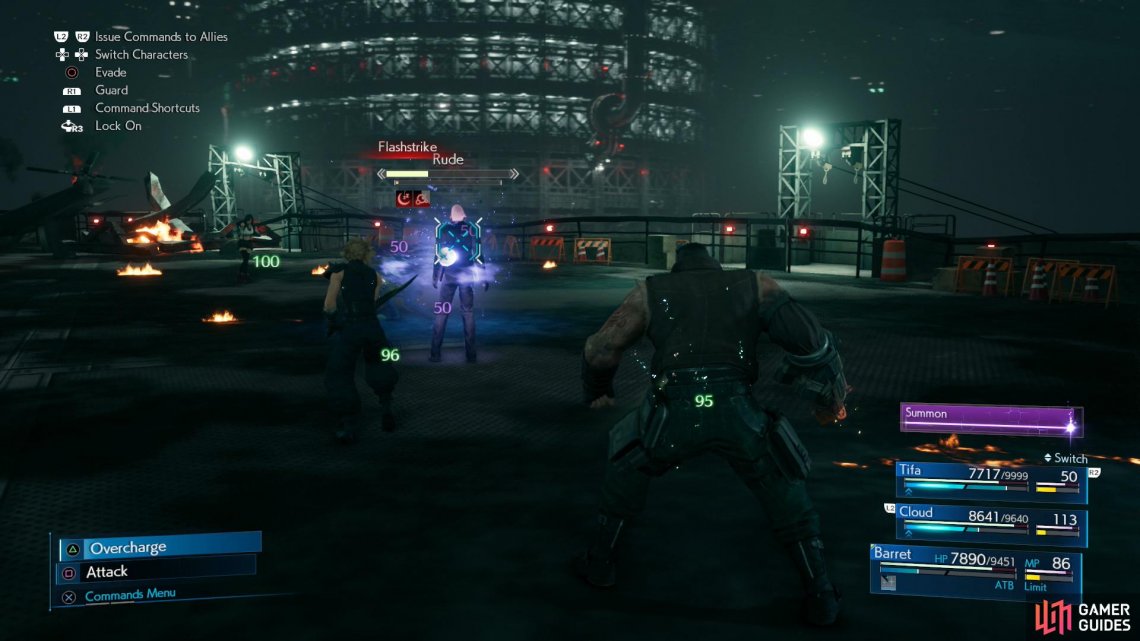 (1 of 3) Hitting one of the Turks with “Sleep” at the start of phase three will make the rest of the fight much easier.

After reducing Reno to under half his HP you’ll have to shoot Rude out of the sky, a trivial task for Barret. Once downed, Rude will join the fight, starting at around half HP. Rude’s attacks are as follows:

Hit Rude with Bio, then Sleep as the fight starts and use the time to Rude is sleeping to punish Reno. Rude will stay asleep for a generous length of time, but if you want to ensure a quick victory, consider hitting Reno with “Stop”. Constantly switching characters to shift aggro and shake up the AI works wonders here, and you should once again use Cloud and Barret’s “Triple Slash” and “Maximum Fury” to knock Reno off-balance, setting him up for more powerful attacks from Tifa. If Rude wakes up, put him to sleep again and concentrate your efforts on putting Reno down. Once he does, you can focus on Rude, who is far less dangerous without Reno to combo with. The same tactics that overwhelmed Reno will work on Rude; Barret alternating between Overcharge and “Maximum Fury” is a great way to frustrate the enemy.