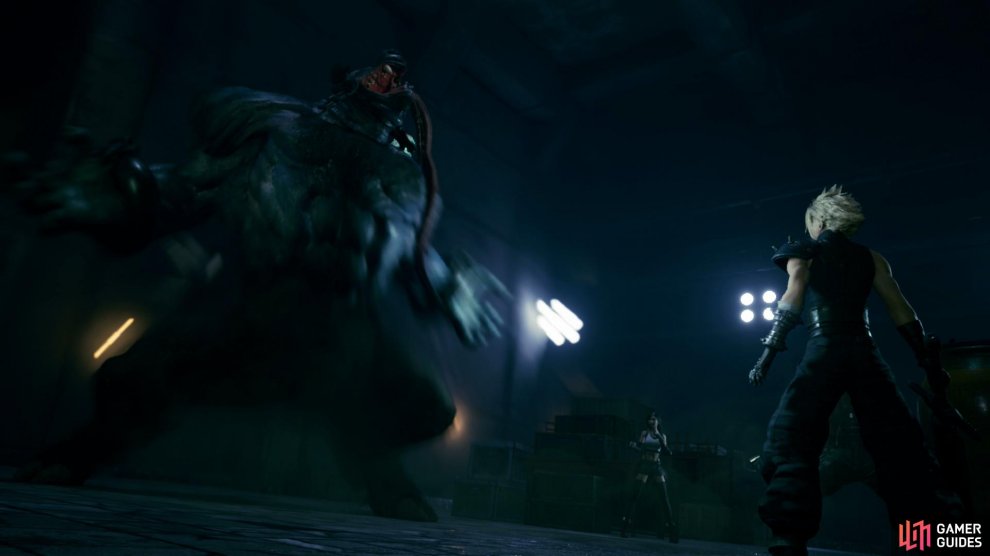 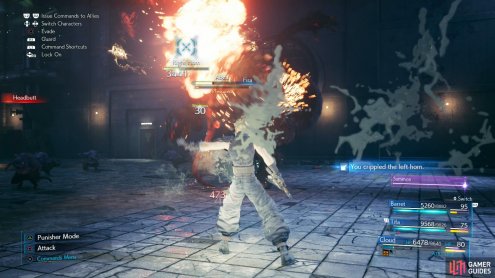 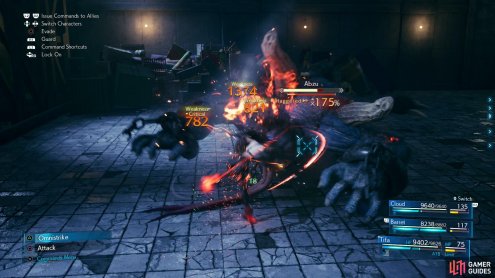 Your second fight with Abzu starts out pretty tame. He'll generally only employ a limited variety of physical attacks during phase one, including "Bash and Smash" and "Ground Pound". His Abzu Shoats are the main innovation in this fight, not Abzu himself, and they'll generally prove to be a nuisance with their "Headbutt" and "Diving Tackle" attacks, which deal moderate damage and will knock a character down - possibly (read: frequently) spoiling attacks. This is a glimpse of how annoying these foes will become as the fight intensifies, but for now do your best to ignore them.

Your strategy for this fight will largely remain the same throughout - hit Abzu's horn with Fira as much as you can. To this end, we load Cloud up with Fire + MP Absorption and Magic Up Materia. He can block, draw Abzu's aggro, and use Fire (when he's not healing) every time he has an ATB segment to spare. Tifa and Barret absolutely can join in on this as well, albeit remotely, although Tifa's main role in this fight is as a pure damage-dealer, and frankly she's probably better off just pegging Abzu with repeated "Omnistrikes" while hoping for a generous Stagger period in which to use her full "Starshower", "Rise and Fall" and "Omnistrike" combo.

If phase one lasts long enough Abzu will leap up onto a ledge and from there use abilities like "Provoke" (inflict "Berserk") and "Playtime", which coordinates the attacks of Abzu Shoats, often enticing them to attack a character en masse. Their aforementioned attacks are weak enough, but getting hit by several of them in succession can add up quick. Use fire magics to dislodge Abzu and keep punishing him.

After being reduce to around 66% of its HP, Abzu will begin phase two by leading onto a ledge and using "Blackwater Blast". This one is just for show, but it's a harbinger of what's to come. With the addition of a few new attacks, this phase plays out much like the last one, just be sure to get away from the glowing pipe (or hide in the corner near the pipe) to avoid the intermittent "Blackwater Blasts" Abzu will use. Keep attacking the horns with Fira and reduce Abzu to 40% of its HP to start phase three.

Abzu will start out phase three by gathering its remaining Abzu Shoats near it. Immediately use every character to pelt them with Fira, if possible, as the cluster is just too tempting a target to resist. If you can manage to hit them, you may just dispatch most of the Abzu Shoats outright.

Succeed or fail, keep pelting Abzu with Fira and after a very short while (25% of its HP or so) it'll "Enrage" (shedding its Stagger gauge in the process) and start spamming "Blackwater Deluge", which is similar to "Blackwater Blast" save the damaging deluge will come out of both pipes alternatingly. Hide in the corner near one of the glowing pipes until the attack passes, then punish Abzu as much as possible. If you need more time, you can inflict Abzu with "Sleep" or "Stop" - it would have been of dubious value in other phases, but Abzu's far more dangerous at the end of the fight.

Abzu will spam "Blackwater Deluge" fairly regularly near the end of the fight, but fortunately your summon gauge will start filling. When it's full, summon Ifrit and put an end to the fight.

For defeating Abzu and the Abzu Shoats you'll obtain the Way of the Fist Vol. IX Manuscript.