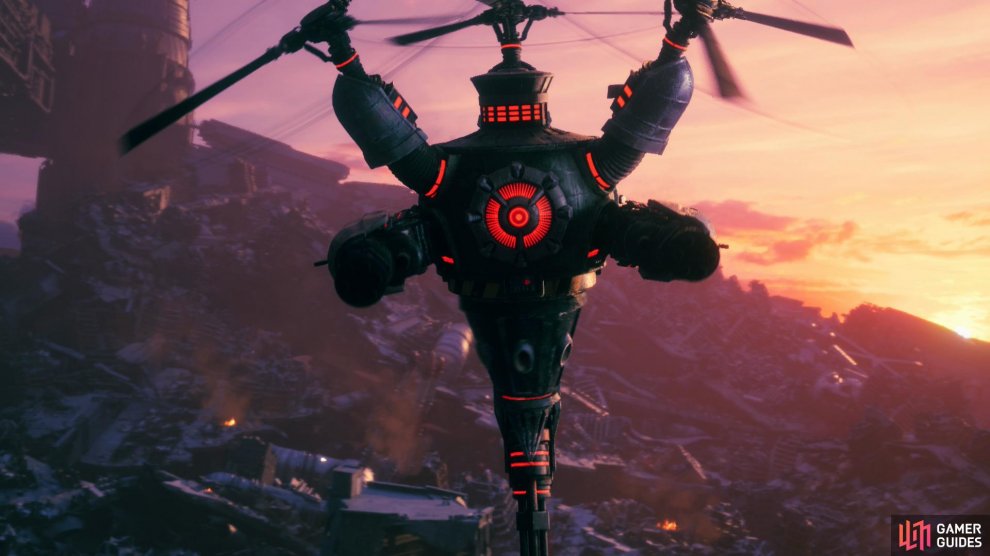 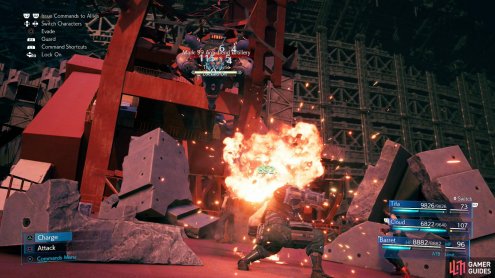 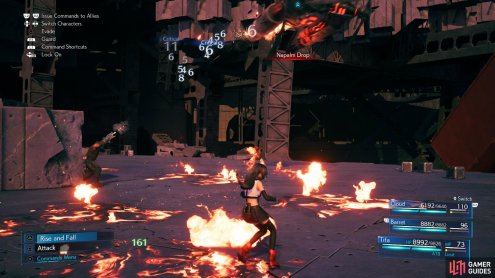 This fight has both performative and preparatory components, although if you gear up appropriately ahead of time, things will be much, much easier. First, Cloud is something of an ancillary character in this battle - he's the best caster we have available right now, but The Valkyrie isn't terribly vulnerable to most spells, and Tifa's a better damage dealer and Barret's a better tank. Cloud, then, has little role in the battle save healing, so we stick him with Healing + Magnify and let the AI control Cloud most of the fight.

Barret and Tifa will play a decidedly more active role in this fight, mostly because Barret can actually hit The Valkyrie when it flies out of range, and whenever it's within range of your melee attackers, Tifa's the most competent at inflicting Stagger and damage. Due to their more active role, they'll get better protective materia than Cloud: equip Fire + Elemental on their armor and Binding + Warding anywhere you can fit it. Finally, make sure all three have Star Pendants - Poison is the least of your worries in this fight, but why bother with it at all if you don't have to?

The first phase is incredibly simple, and it'll end if you deal enough damage (reduce The Valkyrie to around 80% of its HP) or if enough time passes. In the meantime, The Valkyrie will show off its basic attacks:

The Valkyrie will largely stay out of range in this phase, obligating you to shoot at it with Barret. When it comes over land, switch to Tifa and attack it - melee attacks build up The Valkyrie's Stagger gauge surprisingly quickly, although there's little you can do in this phase due to its brevity and The Valkyrie's elusiveness.

After some absurd scenes you'll move into phase two, where the battle really begins. The Valkyrie will still use all the attacks from phase one, but adds to them some nasty new abilities:

The difficulty of this phase - and largely this fight - depends on your preparations. If Barret and Tifa are immune to fire, "Poison" and "Sleep", this phase will be largely trivial, even moreso if you absorb fire and buff with Regen. In the latter case, "Mark 99 Anti-Fiend Artillery" and "Napalm Drop" will actively heal you, and by extension, "Firewheel" will go from a likely killer combo to a nuisance. Being able to walk through "Antipersonnel Gas" is also a great boon, as it'll allow you to focus on your offense. Speaking of which...

For this phase you'll want to attack with Tifa, building up The Valkyrie's Stagger gauge, and when it becomes "Pressured" hit it with "Focused" attacks via Cloud and Tifa. When Staggered, switch back to Tifa and perform the typical power combo of "Starshower", "Rise and Fall" and "Omnistrike", and have Barret and Cloud contribute with "Maximum Fury" and "Triple Slash", if possible. It'll take a few of these sessions to drop The Valkyrie down to around 50% of its HP, at which point the next phase starts. 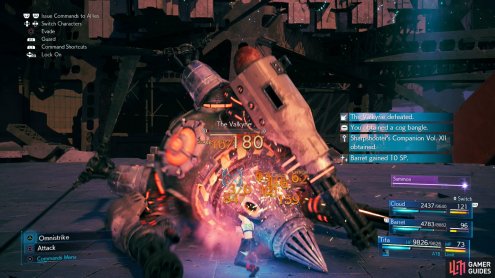 For phase three you'll be dealing with a more aggressive foe that sometimes mixes attacks together (like shooting "Antipersonnel Gas" during "Firewheel") and attacks more frequently, as advertised by its "Limiter Override" ability. There's also the... well, the orbiting probe that calls down laser strikes. This is actually the key to victory, as The Valkyrie will protect itself with a barrier that reduces damage and Stagger, and causes Stagger sessions to end almost instantaneously. Lure the laser over to The Valkyrie (it's stationary for a number of its attacks - being immune to vary attacks and debilitations really helps here) and stand in the targeting beam for a few moments until it starts to expand, then quickly flee to hopefully catch The Valkyrie in the blast. If you get hit it'll inflict around 5,000 damage, but it'll remove the barrier from The Valkyrie, knock it down, and "Pressure" it. In Hard difficulty, the laser seems less committal about locking on, so you'll have to be more patient - and vigilant - than in Normal difficulty.

Repeat this process several time - hit The Valkyrie with its own laser, Stagger it, then punish it with Tifa's power combo. For defeating The Valkyrie in Hard difficulty you'll obtain the Sharpshooter's Companion Vol. XII Manuscript.