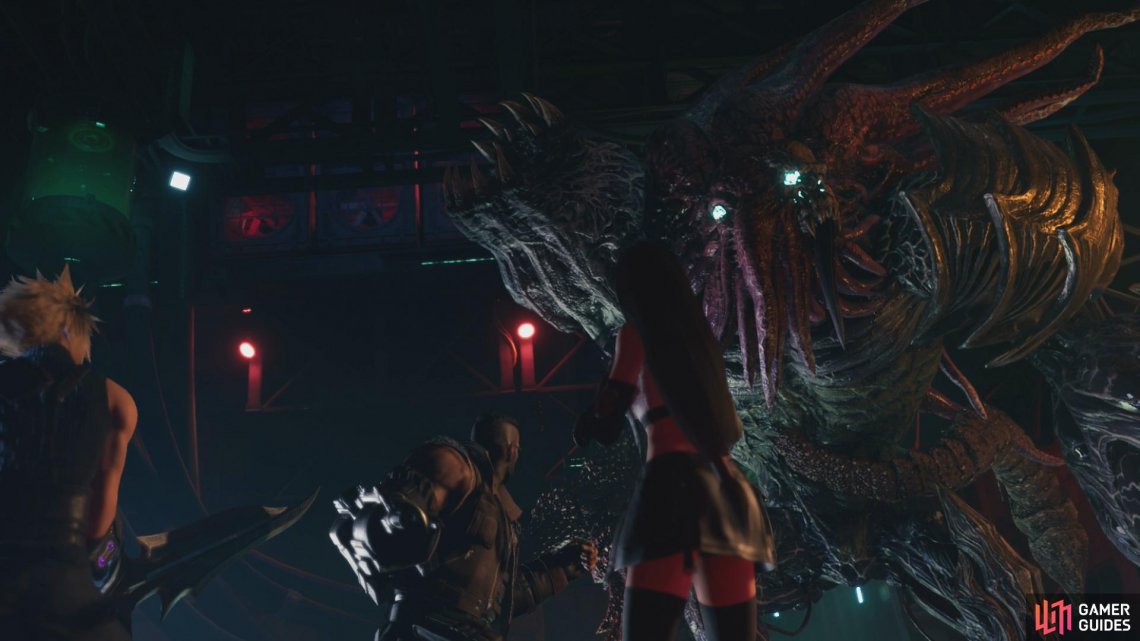 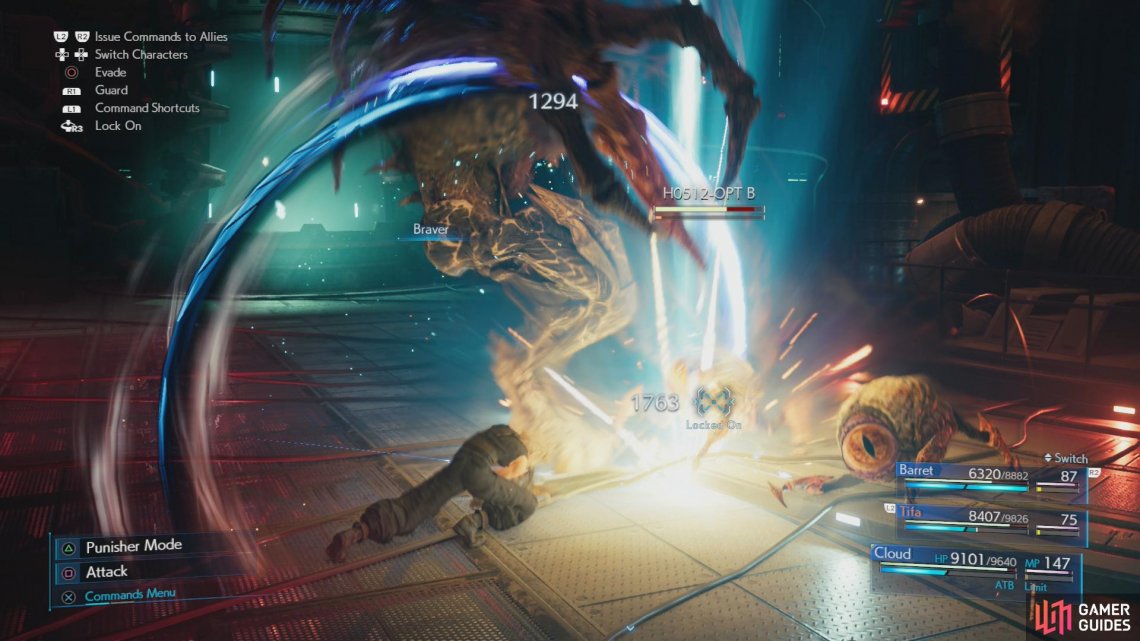 (1 of 2) Specimen H0512’s “Seize” attack can be interrupted by a sufficiently power attack. 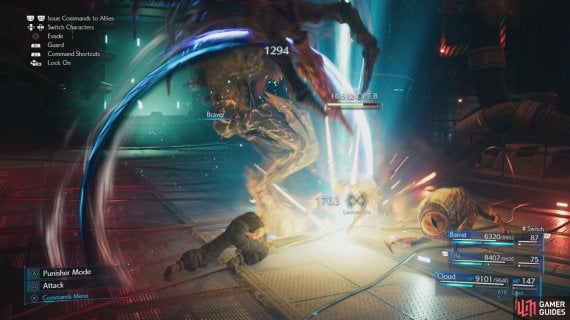 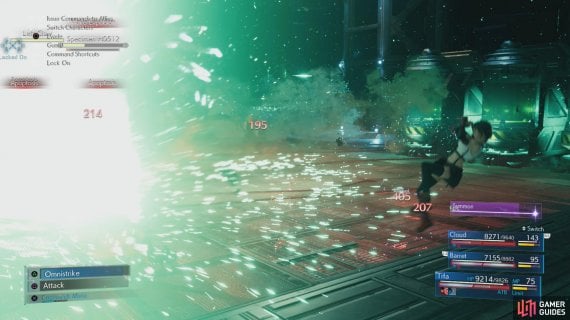 Specimen H0512’s “Seize” attack can be interrupted by a sufficiently power attack. (left), The next most dangerous attack, “Apoptosis”, can be blocked. (right)

This fight was surprisingly simple in Normal difficulty, and little has changed for Hard difficulty. In many ways, it’s a less complicated version of the fight with Abzu and the Abzu Shoats, with Abzu replaced by Specimen H0512 and the Abzu Shoats replaced by H0512 Opts, with the H0512 Opts pestering you with basic elemental spells and the odd “Spinner” attack and Specimen H0512 doggedly pursuing the controlled character with an incredibly limited number of attacks (usually “Rake”, “Seize” and “Noxious Expulsion”):

The H0512 Opts are largely there to distract you and interrupt attacks, like the Abzu Shoats did, and they’re not quite as effective as their counterparts at doing that. Ignore them whenever you can, as Specimen H0512 will repopulate the battlefield with them periodically via its “Regurgitate” ability. Only in later phases do they become potentially dangerous due to their “Apoptosis” ability, which causes them to self-destruct, healing heavy damage. Even then, however, they usually seek out the controlled character, and their kamikaze attack can be blocked, heavily mitigating damage. 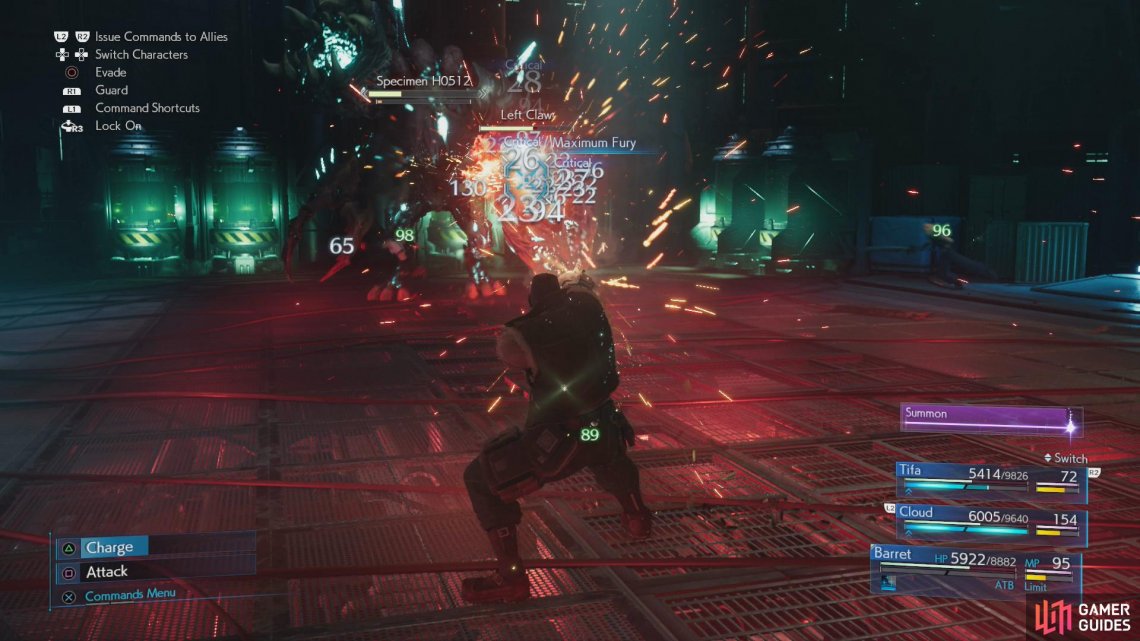 (1 of 4) You can target the arm easily with Barret,

Start out the battle by buffing with Regen, then focus on Specimen H0512’s claw. Destroying it will “Pressure” the abomination, allowing you to more readily inflict Stagger. Your time period to achieve this is limited, however, as it’ll eventually use “Regrowth” to recover its arm and put an end to its “Pressured” status. Barret’s base attacks, “Overcharge” and “Maximum Fury” are easy ways to damage the claw, but Tifa’s “Omnistrike” attacks fast enough that with a little practice you should be able to damage the claw regularly with it. Cloud, however, leaves something to be desired, so keep his ATB for healing and performed “Focused Thrust” when Specimen H0512 is Staggered. Once you Stagger the monstrosity, Tifa’s “Starshower”, “Rise and Fall” and “Omnistrike” is the best way to deal damage, but you should avoid Staggering it early, as it’ll move to phase two once reduced to 75% of its HP.

Not that Specimen H0512 will be passive while you’re trying to cripple it, although its offense is fairly limited. It’ll largely spam its main attack, “Rake”, targeting the controlled character to a fault. Use Cloud and Tifa to block and build up their ATB (Tifa is especially useful as a tank, as with practice you’ll learn to riposte with “Omnistrike”) and command Barret remotely to attack the claw, switching as you need to shift aggro or perform commands that can only be done manually. The big attack you need to be wary of is “Seize”, a grapple attack which cannot be blocked, and will deal massive damage to the caught character (5,000+). You can interrupt this with a timely “Braver” or “Omnistrike”, so try to keep Cloud and Tifa charged and ready to help out, and if something goes wrong, heal up quickly.

During the first phase Specimen H0512 will also use “Noxious Expulsion”, which deals heavy damage and inflicts “Poison”, but in phase two and three it’ll exchange this attack for “Mako Expulsion”, which deals heavy damage and inflict “Slow”, and may provoke the H0512 Opts into using “Apoptosis”. Dodge these attacks the best you can, but we opt to make ourselves immune to “Poison” just so we don’t have to worry about it.

Keep destroying the claw and inflicting Stagger, then punish Specimen H0512 when it’s Staggered. It should go down before long if you keep up the pressure, and by the time phase three rolls around you’ll probably have a full summon gauge and perhaps a limit break to use to expedite matters. You can also afflict Specimen H0512 with “Stop”, something best used for the creature’s more aggressive later phases.