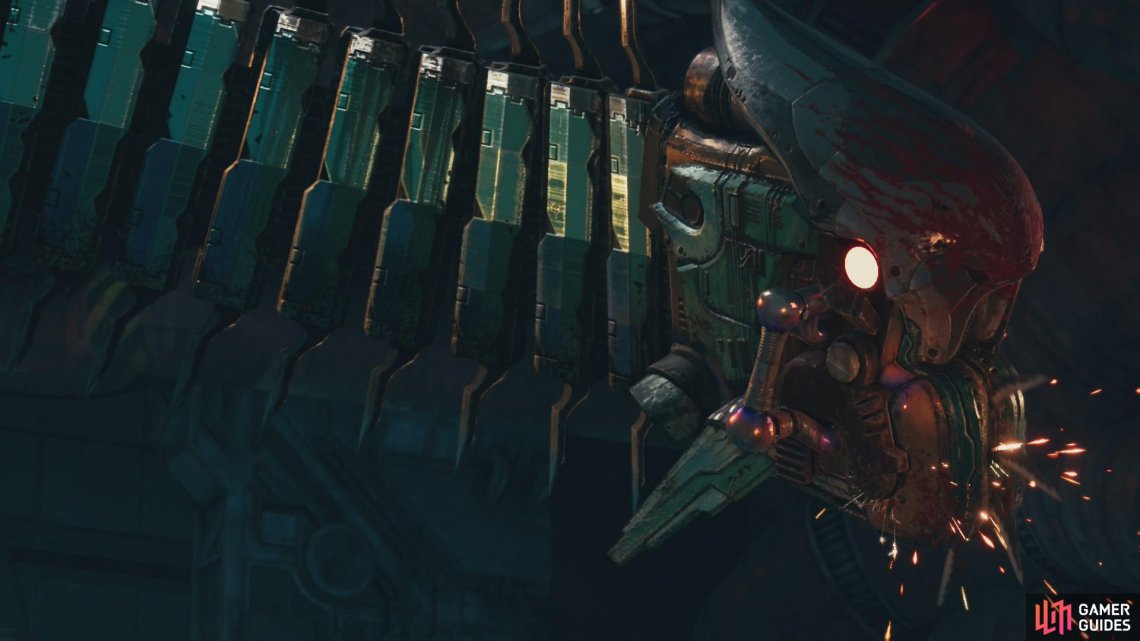 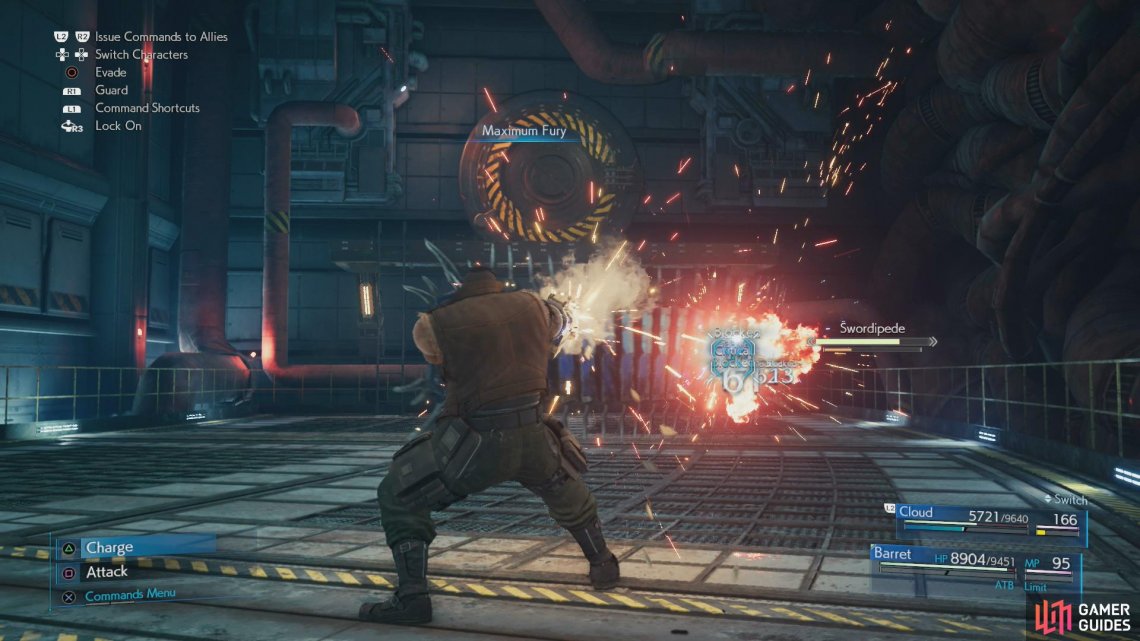 (1 of 2) In the first phase, just shoot Swordipede with Barret. 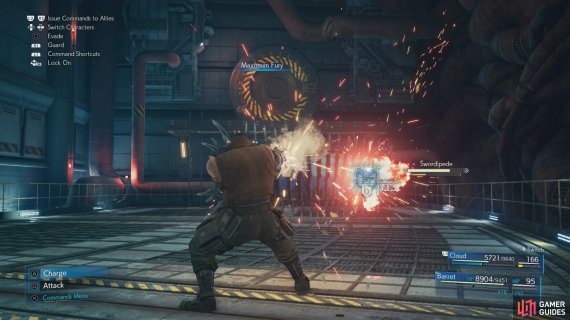 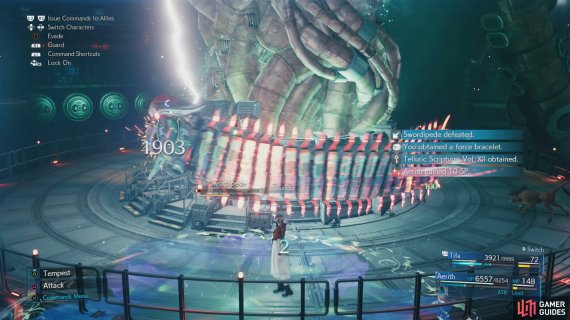 Of all the creatures in Hard difficulty that can generously be called a boss… this is easily the weakest of the bunch. Equip Barret with Lightning + Elemental (weapon) and First Strike Materia just to speed things up, then have him shoot at the Swordipede, using “Maximum Fury” whenever his ATB is full, and “Overcharge” whenever it isn’t. All you have to do is avoid its attacks while whittling down its HP to 60%, which is just as easy as it sounds. Its attacks this phase are as follows: 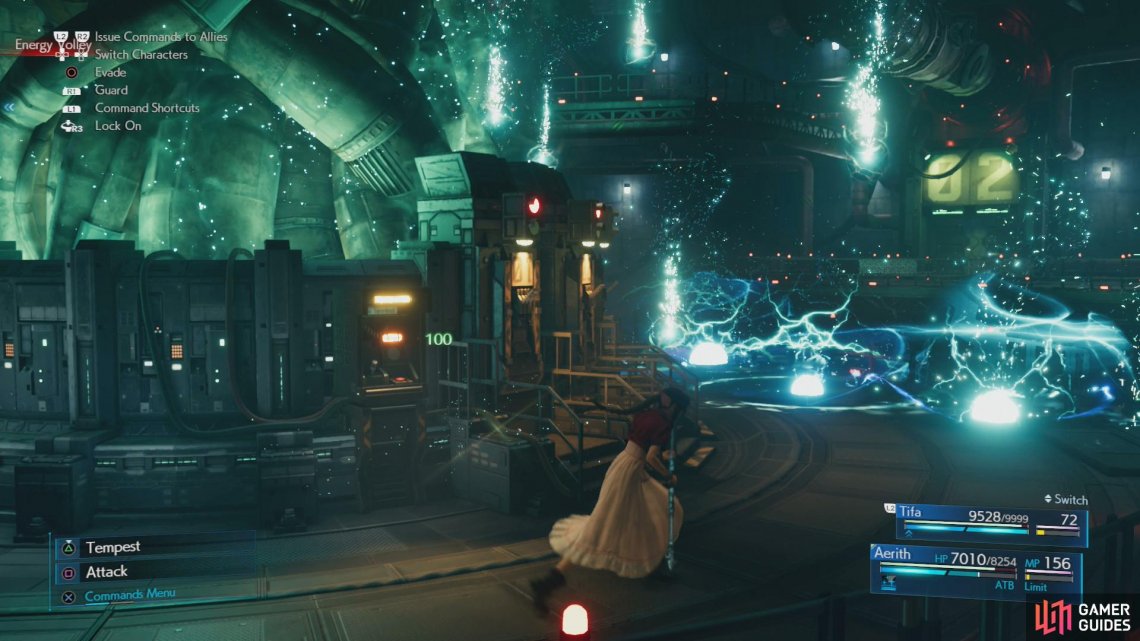 (1 of 2) Follow behind Swordipede to avoid being bombarded by “Energy Volley”. 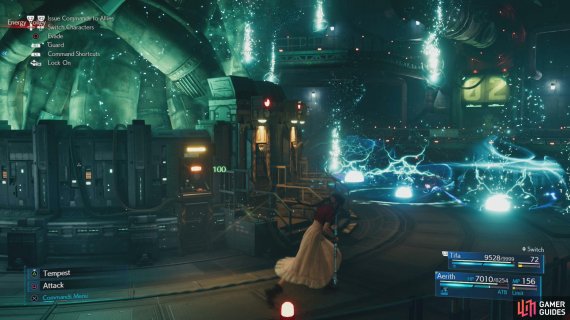 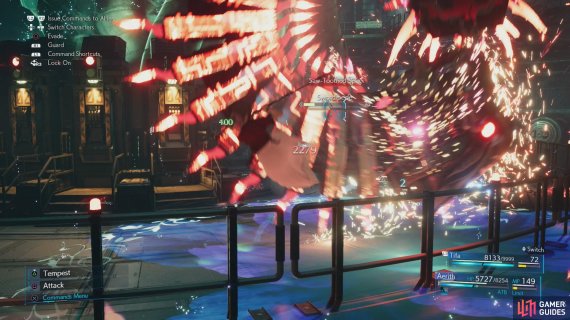 Follow behind Swordipede to avoid being bombarded by “Energy Volley”. (left), Saw-Toothed Spin will deal massive damage if it hits, and even blocking it is painful. (right)

Once reduced to 60% of its HP it’ll go haywire and end up in the central chamber with Tifa and Aerith. During the transition cutscene you’ll get a chance to enter the menu - just hold down [SQUARE] to confirm and make sure Aerith is equipped with Lightning + MP Absorption and First Strike Materia. When this phase of the fight starts, have Aerith lay down an “Arcane Ward” and set about pelting the Swordipede with Thundara. Swordipede isn’t weak to lightning, but the Thunder family of spells are unerringly accurate, so you don’t have to worry about aiming or being obstructed by the central pillar.

The only new attack Swordipede has here is “Saw-Toothed Spin”, during which it’ll spin around the battlefield several times, dealing massive damage if it lands a hit. It can be blocked, but you’ll still take over 2,000 damage, so dodging is ideal… if you can manage it. On the plus side it’ll become “Pressured” after this attack ends, allowing you to score some easy hits with Tifa. You also need to be wary of its “Energy Volley” attack, which will be much more concentrated on a battlefield this small. Just wait for it to start this attack and follow behind it to avoid damage.

Keep zapping it with Thunder/Thundara until it falls - it can only sustain several such attacks. For defeating this boss you’ll obtain the Telluric Scriptures Vol. XII Manuscript.