You won't get a chance to change your gear for this fight, so whatever you had equipped throughout the fight with the Whispers you'll have for the start of this fight. Fire + Elemental on Cloud and Lightning + Elemental on Tifa will both help out against Sephiroth, and once again if you have Gotterdammerung, use it. 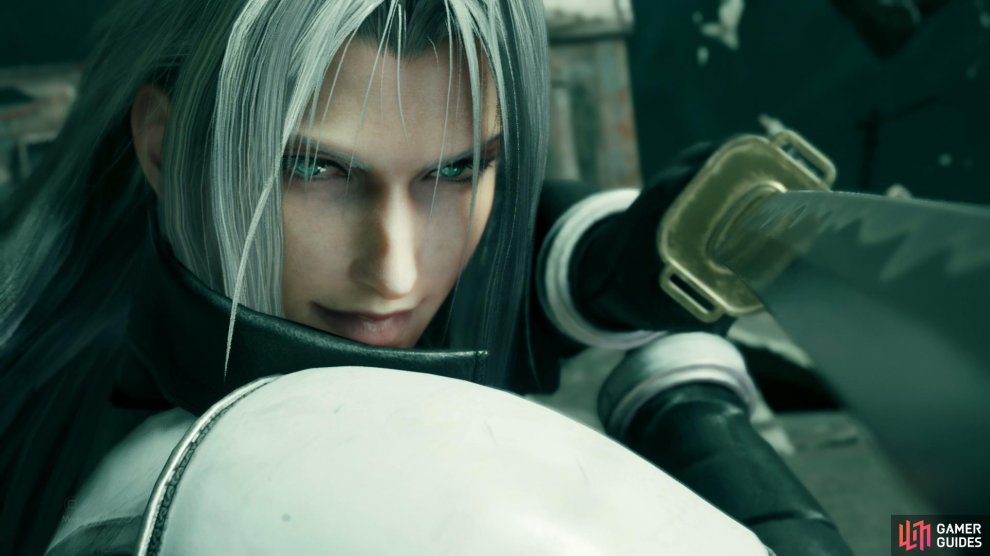 Despite being the last fight in Hard difficulty, Sephiroth still ramps up difficulty like he did in Normal mode. In the first, short, phase you'll face Sephiroth with just Cloud:

Use "Counterstance" or Punisher mode against "Telluric Fury", and dodge the downslash of "Aeolian Onslaught". When Sephiroth becomes "Pressured", hit him with "Focused Strike" until he's Staggered, then try to dish out as much damage as possible. The only real difference between Normal difficulty and Hard difficulty here is the damage Sephiroth deals, and the fact he'll be less shy about using spells - usually Firaga and Blizzaga. Block the latter and, if you followed the loadout advice (above) Cloud should absorb fire damage.

Once Sephiroth is Staggered you'll get some in-battle scenes that sees you transported to a new battlefield, after which Sephiroth will return the favor. Repeat the process above - Sephiroth is more aggressive this time, but the routine is the same - and when you reduce Sephiroth to 80% of his HP the next phase will begin.

Deal damage to Sephiroth until he moves on to phase two, where you'll be joined by one of your allies (for us it was Tifa). Sephiroth will add some new attacks for this phase:

Aerith will join you during this phase, and Sephiroth will increase the tempo once again, attacking even more frequently, and throwing in some new attacks, just to keep you on your toes. He'll also diversify the elemental magics he uses:

Otherwise, you'll want to repeat the same strategy as before. If Sephiroth is focusing on one character too much, just fight defensively to charge your ATB, then switch characters to shift Sephiroth's aggro, striking him when he's otherwise occupied attacking the other character, or using commands to score hits.

The next phase is where the battle really picks up, as Sephiroth will use his various "Elemental Infusions" and associated abilities - along with a variety of attacks used in earlier phases. These are as follows:

Take control of Cloud during "Fire Infusion" and Tifa during "Lightning Infusion", as many of Sephiroth's attacks should heal them (especially Firaga and Thundaga). This is, of course, assuming Tifa shows up at all; one character should join during phase two, and a third at the start of phase three. Either way, your strategy against the ultra-aggressive Sephiroth should be largely the same: block with your active character, sneaking in hits when you can, and charging your ATB. When you're ready to unleash some offense, you'll typically find it easier to do so via issued commands, or by switching characters long enough for Sephiroth to shift aggro, then switching back to land attacks when he's busy attacking another character. Cloud and Barret are relatively easy to use like this, with "Triple Slash" and "Maximum Fury" being good damage dealers.

Keep your HP up and do not use your limits or summons - save them for phase four. Keep in mind that Sephiroth will use "Octaslash" at the end of every "Infusion" phase, just before he changes his affinity, so be prepared to heal or revive a character afterwards. 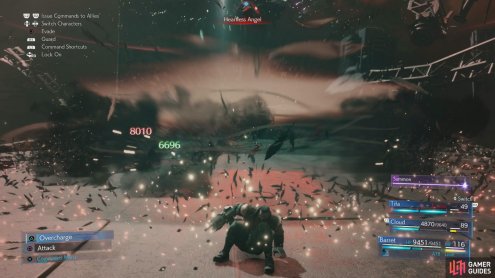 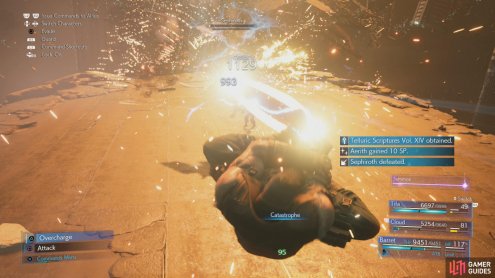 Once Sephiroth's HP are low he'll shift to his fourth and final phase, which is timed. If you let Sephiroth finish his countdown he'll use his ultimate attack "Divine Proclamation" will one-shot the party. Sephiroth is actually less aggressive this phase, taking a more care-free, methodical approach to the battle. He can pelt characters with multiple bolts of dark energy, which will stun them, his "Shadow Flare" now creates numerous spheres of dark energy that must be avoided, and he can deal heavy damage in an area immediately beneath and around him with a contemptuous down-swing of his sword.

His worst attack in this phase, however, is "Heartless Angel", which has a large area of effect and will reduce all characters caught within to 1 HP. You can probably avoid the attack with your controlled character, but you shouldn't count on the AI for much. Curaga + Magnify will come in handy here.

If you saved up your limits, this shouldn't be too bad, just make sure to be methodical and only use them immediately after Sephiroth teleports, as losing a limit due to an unfortunately-timed teleportation is... not a recipe for success. Be sure to use a summon at the start of this phase, too, as at the very least its finishing move should deal significant damage to Sephiroth. Failing any of that, if you have Tifa just spam "Omnistrike" or use Cloud to dish out "Triple Slash".