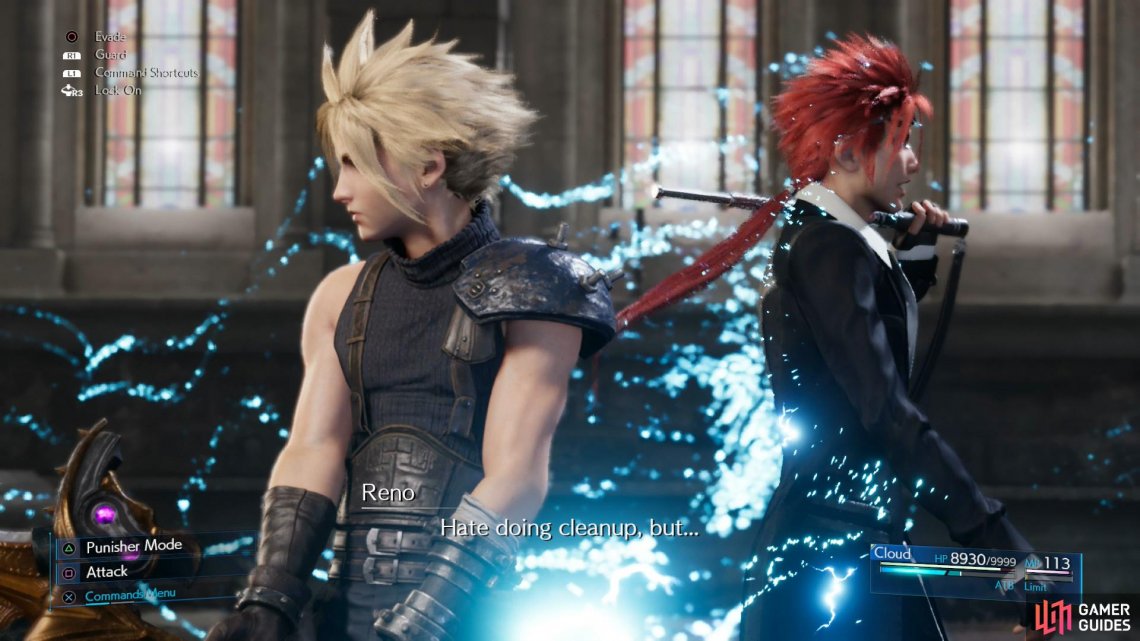 Before you can fight Reno, you’ll need to put down his minions, first, which includes two groups of two Security Officers and an Elite Security Officer. Fire + Magnify will help you get through these foes with a little bother as possible. 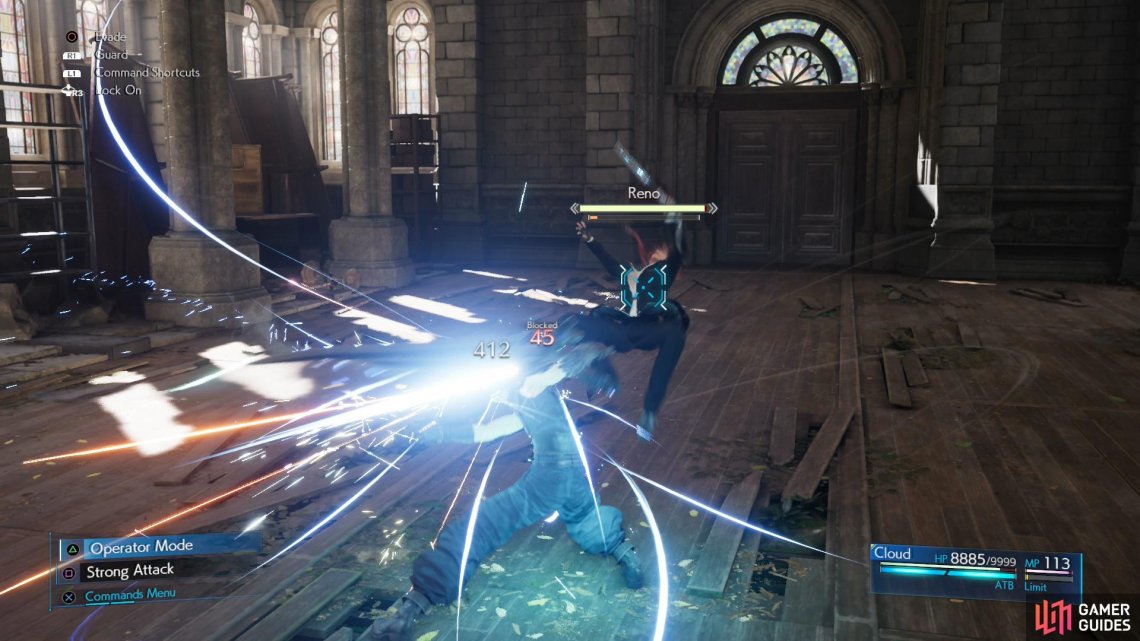 (1 of 5) Reno has little answer for Punisher mode’s counterattacks,

Defeat these six foes and you’ll finally find yourself facing Reno. By now you know the story told between the two battles with Reno in this game - the first time around he underestimates Cloud and pays for it, and that dynamic isn’t changed significantly in Hard mode. Most of Reno’s attacks can be blocked and countered with Punisher mode, and those that can’t can be absorbed by Lightning + Elemental. If you did this, it’ll be very difficult for you to lose to Reno, as it’ll cause his “EM Shot” attack to heal you, not to mention his EM Mines in phase two.

In phase one, Reno really only has a limited selection of attacks, an unnamed baton strike, a much more potent “Shock Swipe” (sadly not lightning damage somehow - will deal heavy damage if it hits, even blocking it is painful) and a dash he’ll use to escape after attacking or if he feels you’re too close. That’s pretty much it, and the latter isn’t even really an attack, although Cloud will still counter (usually to no effect) if Reno dashes too close.

Use Punisher mode, block, and counterattack. After counterattacking either hit Reno with some sword slashes, or immediately follow up with “Braver”. “Triple Slash” probably won’t land all three strikes and “Focused Strike” is really only worth using when Reno is “Pressured”. If he’s being stingy with the “EM Shot” attacks, use Cure to recover lost HP as needed immediately after Reno is countered. Repeat until his HP are reduced to 50%.

Once Reno’s HP are 50% he’ll toss some EM Mines, which will float around and use the “Discharge” attack and rarely “EM Pulse”, both of which deal lightning damage and hence should heal you. That’s right, they’re just floating orbs of healing light if you have Lightning + Elemental on your armor. Either dispatch them with “Triple Slash” or just wait for Reno to attack you - they probably won’t survive the counterattack, which is a shame.

Otherwise, Reno fights exactly the same in phase two as he did earlier, save he may use “EM Mine Toss” to deploy more mines if the battle continue long enough. Counterattack, then follow up with Braver, use your limit break if it charges. Once Reno’s HP are depleted you’ll score The Art of Swordplay Vol. VII.