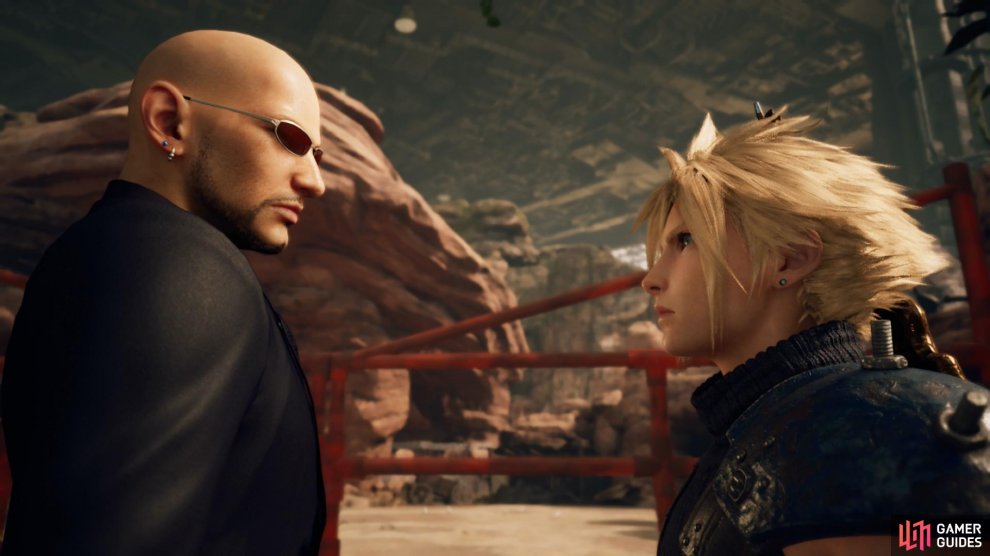 Rude doesn't have too many new tricks in Hard difficulty, but he was never the pushover that Reno was. Fortunately, you've got far more options for fighting him this time around. Before we get into that, his attacks are as follows:

Pretty standard stuff, nearly identically to Normal difficulty save for "Spirit Geyser", which he'll start using in phase two. For this fight we equip Wind + Elemental on Cloud's weapon, as it'll allow him to deal damage faster, and Cloud's your damage engine this fight. Headbands will make you immune to sleep, and while this provides few opportunities, it does prevent Rude from getting cheap damage he doesn't need to have. Time, Binding and Poison Materia are all useful for taking advantages of Rude's many vulnerabilities.

Rude doesn't deal tremendous damage with any of his attacks - you probably won't be hit for more than 1,500 by any single thing he does, which makes Regen fairly useful, and Aerith can usually keep Cloud topped off with Cure. That said, his moves are varied and you'll just need to get used to them to know when to dodge, when to run, and when you need to do a bit of both. He's rarely vulnerable between attacks, and you can't just use counterattacks to win like you could with Reno. That's not to say counterattacks (or better yet, "Counterstance") isn't a good option, but you'll need to pick your spots, countering when Rude uses his "Combo" attack, "Haymaker" or "Shockwave". Keep control of Cloud and switch to Aerith whenever you botch something, as it'll inevitably give you time to land a few attacks with Aerith and charge her ATB.

While Cloud is your primary damage dealer (again, "Counterstance" is lovely when you can pull it off), Aerith plays an important role in this fight, as Rude is vulnerable to various debilitations, including "Sleep", "Stop" and "Poison". Stop is especially useful, as it'll give you enough time to deplete Cloud's ATB gauge completely, hitting Rude with "Braver" or "Triple Slash", but it costs a fair bit of MP, with Sleep costing around 1/3 the MP of Stop. That said, the chapter is functionally over after this, so... do you really care to salvage your MP? Hitting Rude with Bio at the start of the fight will also "Poison" him, which can deal some decent damage over time.

Reduce Rude's HP to 50% and he'll shift to phase two, which is very similar to phase one, save he'll also start using "Shockwave" and "Spirit Geyser". For the former, just dodge to the side when the wave gets close to you and for the later, just run. While it doesn't look like it, you can actually block and counter (or "Counterstance") "Shockwave", but you have to be fairly close for it to connect. In any event, a "Stop" or two followed up by several attacks from Cloud should be enough to get Rude's HP down the rest of the way, or awfully close.