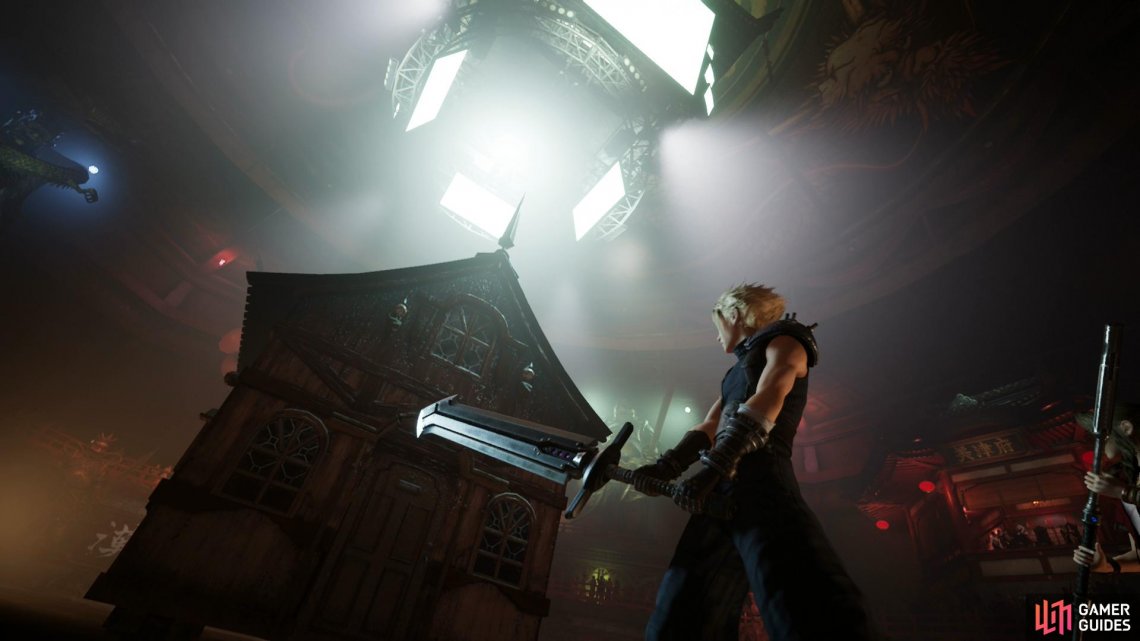 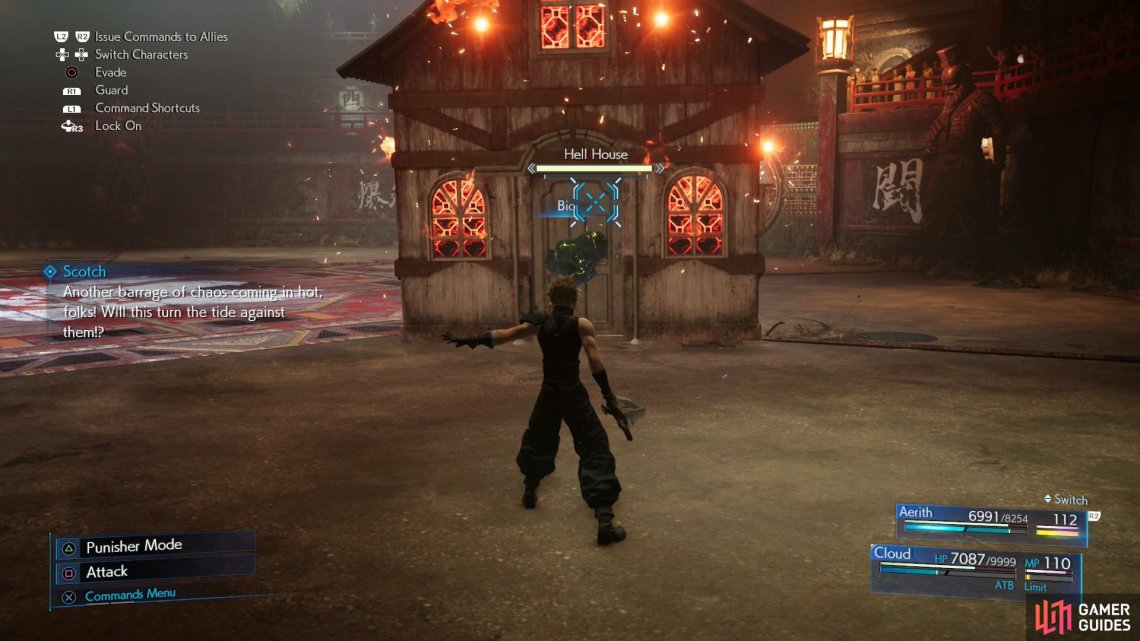 (1 of 2) Start the fight out with Bio and be sure to reapply it when its effects fade - the damage it’ll deal over the course of the fight is quite impressive. 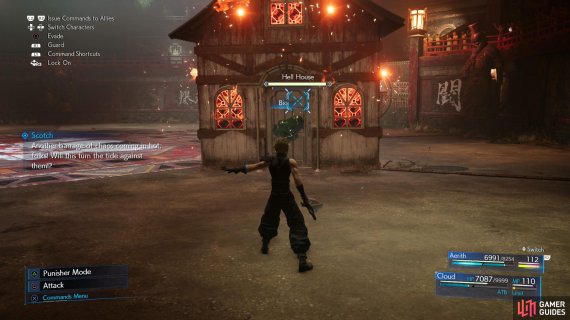 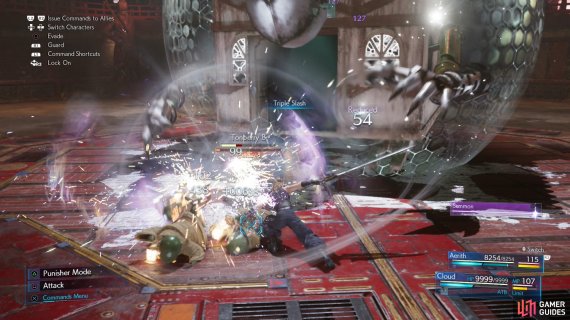 Start the fight out with Bio and be sure to reapply it when its effects fade - the damage it’ll deal over the course of the fight is quite impressive. (left), Be sure to use “Triple Slash” to kill the Tonberrys as quickly as possible. (right)

Hell House is back, and it’s here to make you pay for daring to challenge Hard difficulty! Most bosses thus far have been mostly the same as their Normal difficulty counterparts, sometimes with a fancy new attack thrown in, but Hell House’s new tricks are decidedly more mean-spirited than those of previous bosses. Most of the preparations that worked before will work again: ensure you have all four elemental magics equipped on Aerith (Fire, Ice, Lightning and Wind), Healing + Magnify and of course, Revive. Your real trump card for this fight is Poison Materia, however, as Bio is incredibly useful at dealing damage over time - Hell House spends a lot of time unassailable or outright invulnerable, and inflicting “Poison” will turn this otherwise wasted time into something more productive.

Namely, it’ll add minions at various stages of the fight - in phase one and phase two Hell House will summon several Tonberrys. Yes, freaking Tonberrys. These are weaker variants than you’ve seen elsewhere, although they’re still Tonberrys - consider equipping Cloud with Subversion + Warding materia to protect him from their instant death attacks like “Chef’s Knife”. In phase four it’ll summon a Sweeper and a Cutter. Honestly, the best way to deal with the last two bots is to defeat Hell House before they can spawn, or failing that, before their role in combat can be decisive.

The fight starts fairly similarly to the last time, with Hell House using the same attacks as before:

It won’t be long before Hell House summons some Tonberrys to complicate matters. Glass cannons, these enemies can probably be defeated with a “Triple Slash” or two. If they stand up, however, you’re probably in trouble, as they’ll start with their usual antics - stunning counterattacks, instant death inflicting stab attacks (“Chef’s Knife”), teleporting about… usual Tonberry stuff. Equipping Cloud with Subversion + Warding will offer you protection against these foes, in case something goes awry.

As for Hell House itself, you should buff everybody with Regen, which will mitigate most of the damage the infernal abode inflicts. During the first phase you shouldn’t worry about Staggering it, as it’ll likely change phases before you can achieve much. Just attack with Cloud and when it displays an elemental affinity (keep an eye on its windows!) and work on whittling down its HP. Most importantly, however, cast Bio as soon as you have the ATB to do so - it can’t be overstated how much damage Bio will do to Hell House over the course of this fight.

Phase two starts out with Hell House performing its “Housing Rush” attack, as usual. Block and counter the first stage of the attack with Cloud, then dodge out of the way, after which you’ll just need to continue hitting it with melee attacks and the appropriate element when vulnerable, as in phase one. It’ll spew out more Tonberrys this phase as well, but a few “Triple Slash” attacks should (hopefully) take them out. Hell House’s new attacks this phase include:

At 50% HP, Hell House will switch to phase three, where it’ll start using “God House Mode”, making Hell House nigh invulnerable to melee attacks. Cloud can still attack to charge ATB, of course, but the only meaningful way to inflict damage is to hit Hell House with the appropriate element (again look at the color of the windows) - it won’t advertise element changes, but it usually shifts them before and during attacks. Hell House won’t summon allies during this phase, and Bio will still work despite its resilience to damage, so be sure to apply another “Poison” debuff if the first one ran out. Otherwise, you’ll just need to dodge Hell House’s attacks, hit it with the right element when it’s vulnerable, then attempt to deal damage with Cloud when it’s “Pressured”. New attacks this phase include: 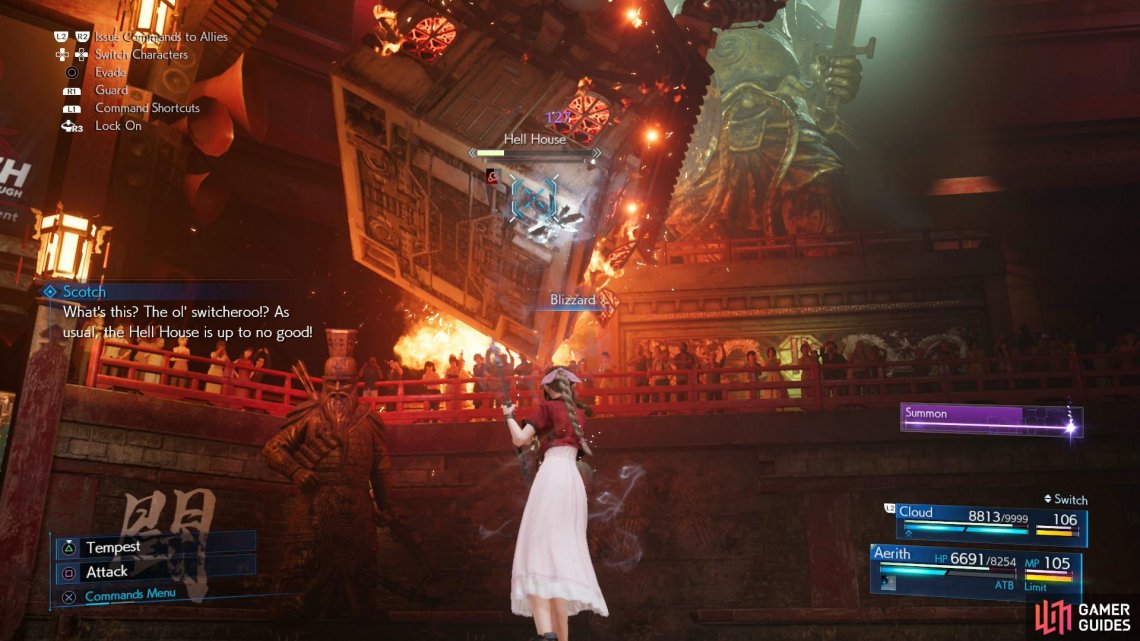 (1 of 4) Phase four is where the battle will be won or lost - hit Hell House with the element it’s weak to during “Heavensward”,

This phase hasn’t changed much from the original… save for the addition of a Sweeper and Cutter if enough time passes. You should try to finish things before this happens, if at all possible. Hell House will start out by using its new “Heavensward” attack, where it’ll take to the skies and fly in circles around the arena while pelting you with “Chair Salvo” attacks. Endure it and wait for its countdown to end, at which point it’ll take on an elemental vulnerability and prepare to dive bomb a character. Quickly hit its elemental weakness with Aerith, switch to Cloud and do your best to inflict as much damage as possible - damage, not necessarily Stagger. Make sure it’s inflicted with “Poison”, then try to finish it off by hitting it with another elemental spell when it’s vulnerable - if Cloud’s limit break it charged, use it when Hell House is vulnerable. Save your summon for later, as it can serve as desperation attack should the Sweeper and Cutter show up.