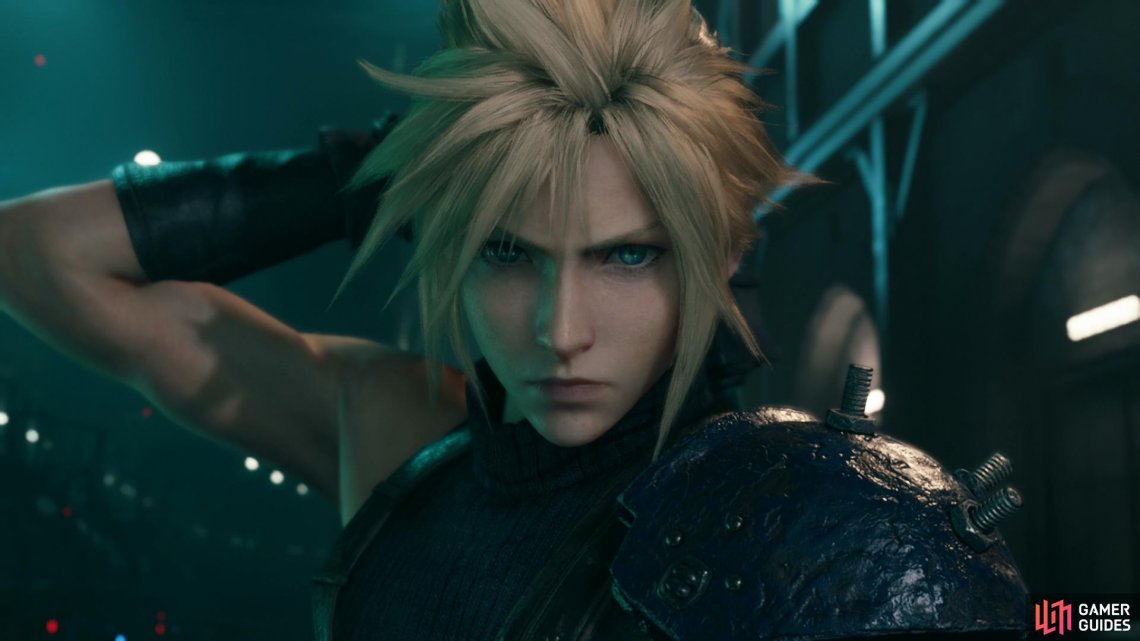 Despite being the main character of the game, Cloud serves as something of a secondary character in most roles: he’s not the best caster, damage-dealer or tank (titles that go to Aerith, Tifa and Barret, respectively), but he’s arguably the second best in all those categories - often close enough to be comparable to the front-runner. This is fortunate, since Cloud is almost always available to you, while the other characters are decidedly more fickle. When Cloud’s in a group, he can conform to fit whatever role you need him to, and when he’s not, he’s capable of holding his own despite varied opposition.

Cloud has the second highest HP, MP, MAG, VIT, SPR and SPD in the game, taking the top spots in STR and tying for first in LCK. Stats don’t tell the whole story, however, as his lack of “Steelskin” makes him an inferior tank compared to Barret, Tifa’s ki abilities far surpass Cloud’s offensive output, and “Arcane Ward” makes Aerith by far the best offensive caster in the game (not to mention her higher MP and MAG). Still, Cloud’s “Braver” is a serviceable enough damage dealer, albeit one lacking the speed of Tifa’s ki strikes and reliability of Barret’s “Maximum Fury”. “Focused Thrust” is probably the single best Stagger-boosting ability in the game, “Triple Slash” is both reliable and powerful, making it a great way to open most fights, and “Blade Burst” can deal hefty damage if you can catch an enemy in multiple beams.

If Cloud had a niche to call his own, it would involve counterattacks, which makes him something of a… damage-dealing tank. Punisher mode increases Cloud’s damage output at the cost of mobility and the ability to block ranged attacks, but it’ll also cause him to counterattack any melee attacks he blocks in this mode. Considering that you can always dodge roll if you really need to (the only penalty is that you’ll have to manually re-enter Punisher mode afterwards), there’s not much downside in abusing Punisher mode whenever it’s proper to do so, and against enemies that rely on physical attacks (Guard Dog being an example) it’s really just an overwhelming advantage. Of course, most foes will be more nuanced, using a mix of melee and ranged attacks. Punisher mode delivers here, as well, as when you enter it Cloud will automatically count as blocking for a brief period. This allows you to keep the mobility and versatility of his standard fighting stance - Operator Mode - while being able to switch to Punisher mode to take advantage of enemy attacks on the fly. You can even do it while blocking! While it comes late in the game, Cloud’s final weapon, Twin Stinger, can impart the “Counterstance” ability, which allows him to brace for damage, and if attacked while doing so, counterattack for massive damage. It’s not a panacea, and if you use it without an enemy attacking it’ll terminate in a rather weak attack, but it is a fine culmination of Cloud’s counterattack-heavy brand of offense and a fine compliment to Punisher mode.

Cloud’s best weapon is arguably his final one, Twin Stinger. It doesn’t have the best Attack or Magic Attack - it’s arguably not even the best in any particular area - but its overall abilities help Cloud out in whatever role he’s in. Elemental damage boosts will help when he’s serving as your blaster-caster (a fair amount of time, especially in Hard difficulty, is spent in this role), Physical/Magical Damage Reduction when Guarding will help him tank and withstand damage sustained while drawing counterattacks, and Healing MP Cost Reduction will allow him to serve as an off-healer. Nice-to-haves like Reprieve and Buff/Debuff Duration don’t hurt, either.