You’ll pick up this quest in Chapter 14 after hearing Kyrie’s speech in the Sector 5 Slums. Make your way over to Wall Market and just outside of Madam M’s Parlor, you’ll find her standing there with some information for you. It appears Corneo’s lackeys are on the lookout for Avalanche members and have made their way towards Aerith’s house. Quickly head to a Chocobo Post and make for the Sector 5 Undercity - Entrance. Once you reach the Slums, make your way towards Aerith’s House where you’ll encounter some familiar faces where you fought Rude in Chapter 8.

Tip: You can steal a valuable Elixir from the next encounter so be sure to set Steal if you don’t want to miss out on it.

Note: Although it’s extremely unlikely on a standard playthrough, you can save yourself a lot of hassle with the next encounter by slotting a maxed Warding-Subversion materia combo.

The Tonberry is a creature not to be taken lightly, despite their rather diminutive stature. After taking the time to Assess the creature, you’ll learn a few key pieces of information, not least the Elixir it has available to both steal and drop. More importantly, three of it’s attacks will cause Instant Death if they connect and the other, Scourge, is a devastating magical attack. 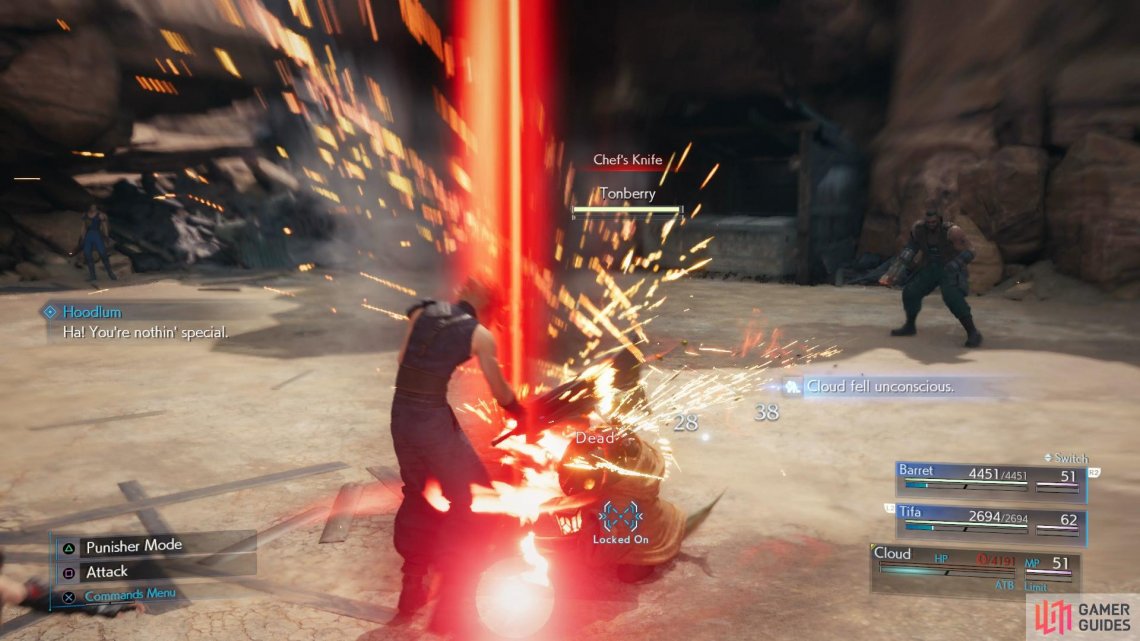 Tonberry also has no weaknesses and nearly 19,000 HP to top it off so you’re in for a long battle that will involve you reviving a lot. Unless you’ve done some extensive grinding or are returning to this Side Quest via Chapter Select, you won’t have a maxed Warding Materia to resist the Instant Death so you’ll just have to deal with using Phoenix Downs and the Revive materia often. What’s more, due to a lot of the attacks being Instant Death, avoid healing to full after reviving as you’ll most likely die to Instant Death regardless.

The most common attack from Tonberry is the Chef’s Knife ability, this will see Tonberry slowly shuffle towards your controlled character followed by a slow stab of it’s knife, this is easy to bait and dodge at the last moment and doing so will Pressure it, allowing you to follow up with the Focused abilities to drive up the Stagger gauge. Never attack Tonberry head on, always try to attack from behind and if it turns around, dodge away from it.

The other ability to watch out for is Doom and Gloom, this is a ranged Instant Death attack that Tonberry will use when you target it from range with an ability or unique action, most commonly with Barret’s Overcharge so try to avoid using that if possible. Tonberry is a difficult battle and at the stage of the game you’ll face this, you have no choice but to eat the cost of Phoenix Downs that you go through. Once you do manage to Stagger it, go all out with Braver, Tifa’s Chi combo and Maximum Fury from Barret, one Stagger should be enough to see the job through.

Tonberry will drop an Elixir upon it’s death (for the potential of two if you stole one) and Corneo’s lackeys will beg for forgiveness before running off.