You’ll pick up this quest in Chapter 14 after hearing Kyrie’s speech in the Sector 5 Slums. Make your way to a Chocobo Post and travel to Sector 6 Undercity - Evergreen Park to find Wymer waiting for you with a task he needs help with.

Make your way into the dome nearby and head back to the underground lab, you’ll need to fight your way back down to Underground Lab - B5 to find the source of the growling however before you head through the door, be sure to set Steal Materia to someone and make sure you have Magnify-Healing assigned to your main healer too. A leveled up Poison can be handy here too but it will be risky trying to use it.

Note: The Enchanted Ring you can steal here will extend the duration of beneficial status effects applied by the wearer.

The Type-0 Behemoth is one of the more difficult foes you’ll face in Final Fantasy VII Remake and as such, it’s good to pay attention to everything going on around you. To begin with, upon using Assess, you’ll notice that aside from it’s enormous HP total, you’ll be able to steal an Enchanted Ring from it so be sure to do so if you have the materia set. 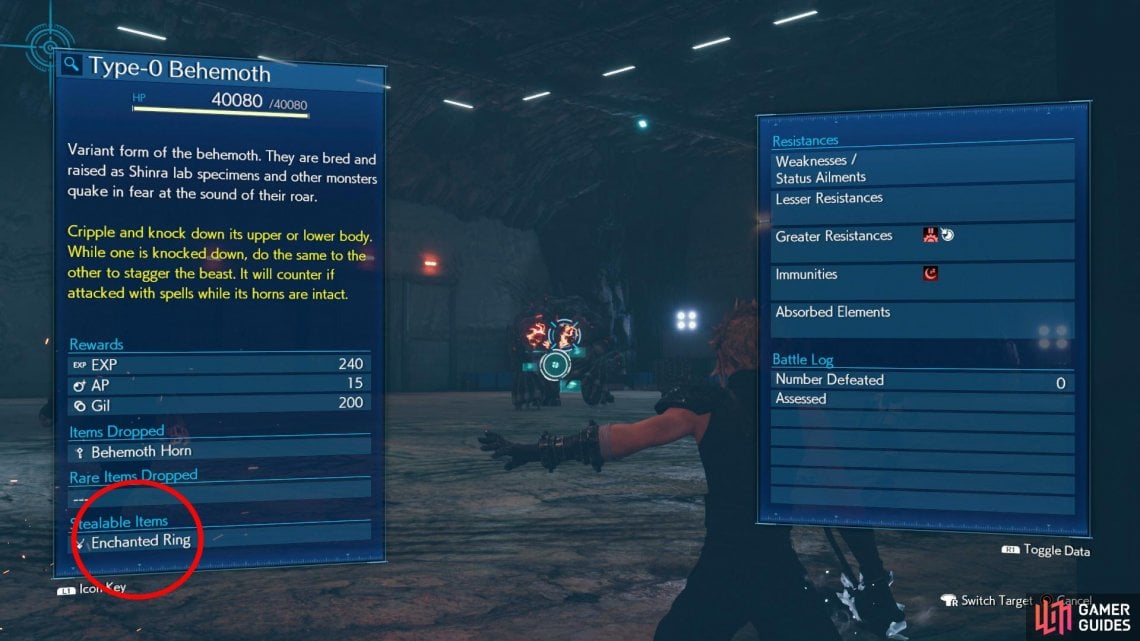 You’ll also notice that there are several targets, Lower Body, Upper Body and the Horn. The first thing you need to realise is that while the Horn is intact, Behemoth will counter any magic against it so ignore it unless you decide to take it out. Instead, the general rule for this battle is to focus your attacks on both the Lower and Upper body, doing so will Stagger it allowing you to deal serious damage to it. The problem here lies in the fact that both parts need to be crippled so focus on attacking both parts simultaneously rather than going all out on one part. Once you do take down either part, Behemoth will use Body Slam, a deadly melee attack so try to attack from range with Barret at that point.

Once you do manage to Stagger Behemoth, you’ll be able to target either the Horn or Behemoth itself and while it’s tempting to break the Horn so you can use Magic, it’s often just better to stick to your current strategy and focus all your attacks on the body. Make use of Tifa’s full Chi combo by using Unbridled Strike twice, this will drive up the Stagger % allowing abilities such as Infinity’s End to pack more of a punch. Curious enough, Bio is effective against Behemoth and considering the amount of HP it has, is well worth the risk of eating a Counter Flare trying to apply it to this monstrosity.

Behemoth’s most deadly attack is it’s Rampage ability, when this happens, keep on the move until it tires itself out before resuming your assault (evident by the red glow disappearing). If Behemoth pounces on anyone while it’s in Rampage, be sure to quickly attack it or else the bound character will be killed. It’s easy to get caught up in trying to mitigate the battle rather than going on the offensive, you don’t want to drag the battle out any longer than is necessary. Both Starshower and Blade Burst are useful Weapon Abilities that will hit both parts at the same time so stick to these two if possible. Once Behemoth is near death, it will retreat to the center of the arena and begin casting ???, also known as Comet so make sure you dart in and finish it off before it can get the cast off.

The Type-0 Behemoth will drop the Behemoth Horn needed for the [Secret Medicine] Quest and you can then return to Wymer by holding down the [L1] Button to return to the surface and deliver the good news. As thanks, you’ll obtain a Wrecking Ball, a new melee weapon for Barret.