You’ll pick up this quest in Chapter 14 after hearing Kyrie’s speech in the Sector 5 Slums. Head to a Chocobo Post and ride it to the Sector 5 Undercity Station and as soon as you arrive, you’ll hear Johnny cursing his luck. Head on over and speak to him to learn that Kyrie has taken off with his wallet towards the Church. Before you follow, be sure to purchase the 23. Descendant of Shinobi Music Disc from the nearby man.

As you make your way through the station and towards the Church, you’ll catch a glimpse of Kyrie (although you’ll be unable to catch up with her). Once you reach the Church, if you’ve not already accepted the Corneo’s Secret Stash Quest, Damon will stop you and hand over the Quest. Once you’re free, head into the Church and pocket the glowing item on the floor to obtain the Medicinal Flowers needed for the Secret Medicine Quest. Finally, speak to Kyrie who is standing nearby to learn that she not only took Johnny’s wallet but also has the Key needed for [Corneo’s Secret Stash] but before she’ll hand them over, you’ll need to pay the Colosseum a visit on her behalf.

Make your way back to Wall Market and head to the Colosseum, upon speaking to the Gatekeeper, you’ll be able to select a “Special Match” once more but be prepared for a difficult battle, at the very least, assign Elemental-Ice to Cloud’s weapon. 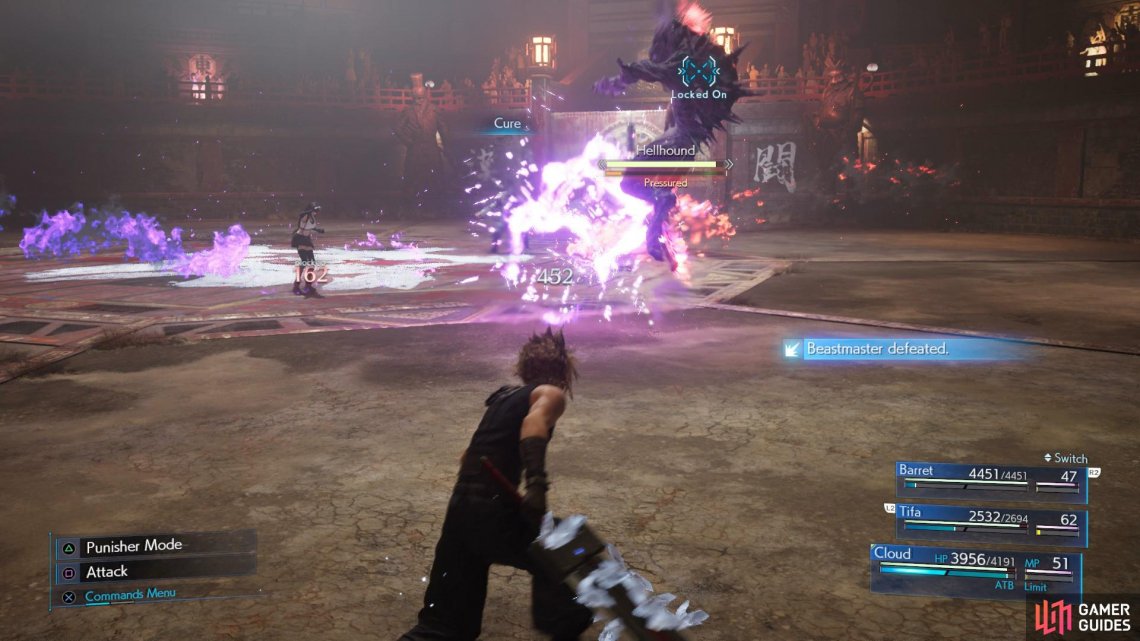 (1 of 3) A single Cure spell will knock it to the ground, Pressured

Your opponents are a rematch with the Beastmaster along with the deadly Hellhound, the true opponent here. The Beastmaster is still as easy as he was back in Chapter 9 and a simple Triple Slash is enough to take him out of the equation. Hellhound, on the other hand, requires much more thought.

As you may notice, the Hellhound has two heads and even though you can only target the Hellhound in general, you can extinguish both flames to help the battle move more smoothly. Ice attacks will extinguish the red flame while healing spells or items will do the job on the purple flame. Of the two, the purple flame is a lot deadlier so focus on dealing with that threat first. A single Cure spell is enough to do the trick and knock it down, Pressuring it in the process, just be wary that it will counter with Fatal Fangs once it gets back to it’s feet, bounding someone in the process.

With the red flame still active, it will use Infernal Erruption on characters at range, in this case, most likely Barret, which will deal hefty damage so stick to melee range to avoid this nasty attack. Once you do manage to Stagger the beast, it will stay in the state long enough for you to use Infinity’s End to really put a dent into it’s HP. Once the battle is over, return to Kyrie to deliver the news, as thanks you’ll obtain both Corneo Vault Key and Johnny’s Wallet along with discovering who The Guardian Angel of the Slums finally is before receiving Corneo Vault Note. 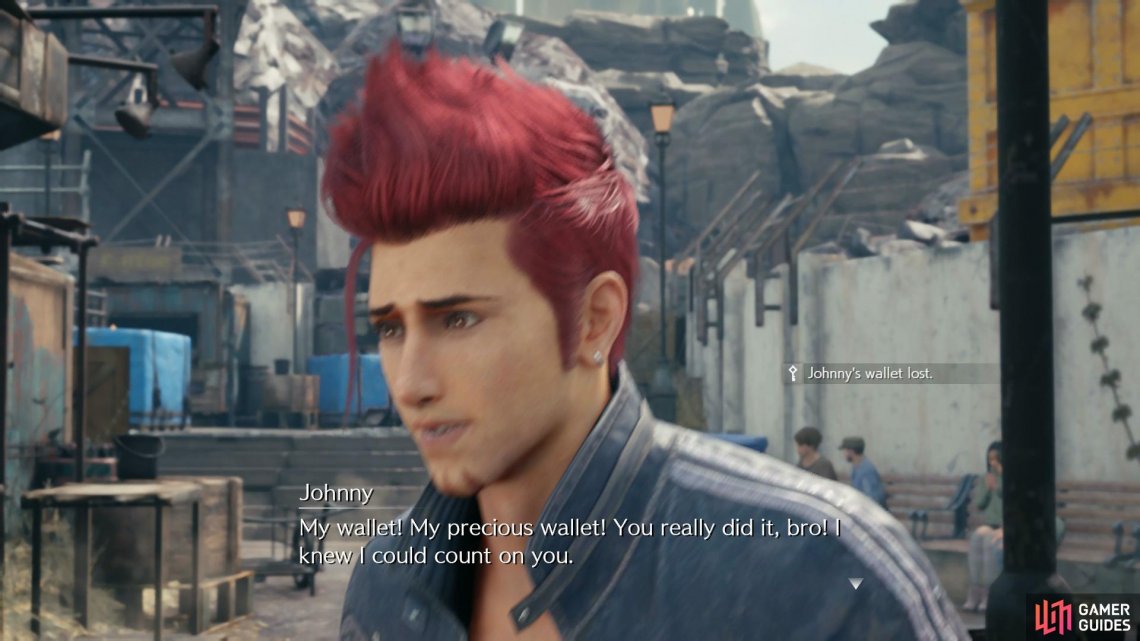 Return the Wallet to Johnny and you’ll obtain a Trophy if you’ve done all of his events in the game.

Although the Quest is complete, you’ll unlock the Discovery: Johnny’s Stolen Wallet event, it’s up to you if you decide to make the trip back to him and hand it over but doing so, provided you did every other Johnny event in the game, will unlock The Johnny Experience Trophy.