You’ll get a chance to play darts near the end of Chapter 3, and playing at least one game (whether you make an honest effort at it or not doesn’t matter) is required to progress the story.

Ideally, however, you’ll try to prove yourself the best dart-thrower in Sector 7, as you’ll be rewarded for it in the long run, and success will net you the Heavenly Dart Player trophy.

Just in case you don’t know how darts works in Final Fantasy VII Remake (or in general) we’ll cover it here, so bear with us.

You throw darts at a board, and where the dart hits determines your score. On the outside of the dart board are numbers indicating the points you’ll get for landing a dart in the zone corresponding to that number.

The dart board is split up into slices running from the center to the edge, and by rings at various points along the board - an outer ring, a middle ring and the bullseye in the middle. The white and black slices give you however many points are indicated by the numbers surrounding the board, the outer ring gives you double those points, the middle ring gives you triple, the green ring around the bullseye as well as the red bullseye circle both give you 50 points. So, if you land a dart in one of the white segments of the “11” slice you’ll get 11 points, if you land in the green outer ring you’ll get 22 points and if you hit the smaller green middle ring you’ll get 33 points.

This is a game of 301, meaning you start with 301 points and points you earn are deducted from this total, with your goal being to hit exactly 0 points. If you go over the points you need, the round will be voided and none of the points will count. A round of darts is just three dart throws - it doesn’t otherwise play any significant role in this minigame. Since the high score for Seventh Heaven is 8 darts (damn you, Wedge!) you’ll need to get exactly 301 points in seven dart throws. 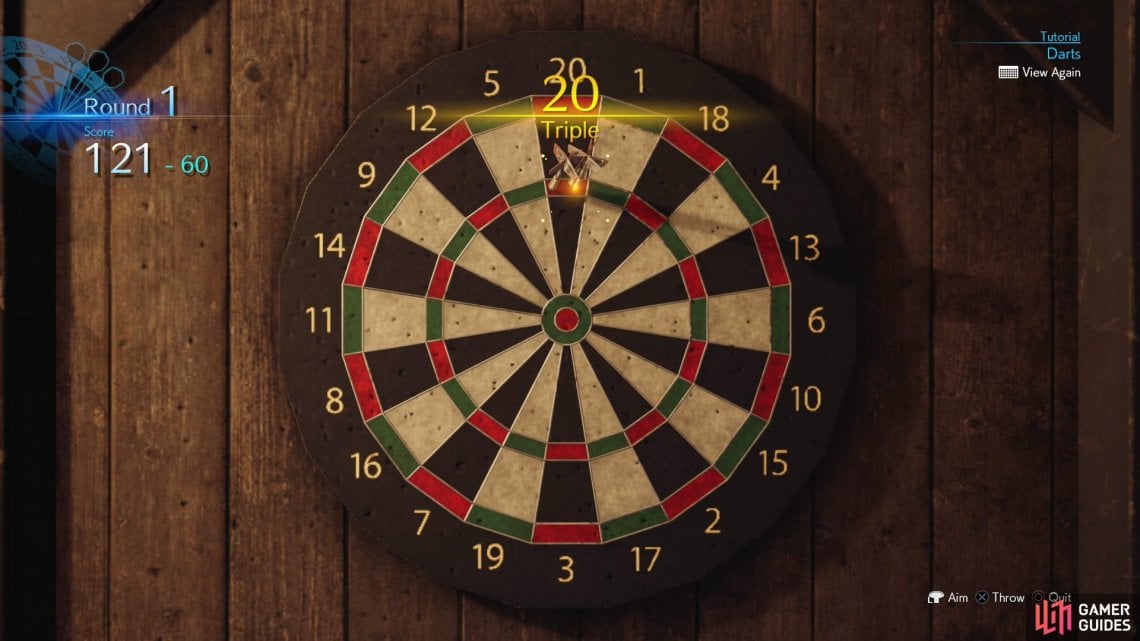 Your goal is to knock away as many points as possible with as few throws as possible - landing four darts in the 20x3 zone is a component for victory.

So, how to do this? Well, obviously you’ll want to start out by removing the most points possible with each dart, and the highest scoring points to hit on the board are the bullseye (50 points - both the red circle and green ring count) and the central “20” ring, which will give you 60 points. We personally found the 20x3 target easier to hit than the bullseye, but the bullseye will reward 25 points for near misses, and the 20x3 target will only reward 20 points… if you’re lucky. Those 1 point fields seem awfully magnetic.

Simple enough in theory. You’ve got to get 301 points in seven dart throws, so if you can hit 4x 20x3 targets, you’re doing pretty good! Knocking down the last 61 points with three darts should be cake… but there’s a catch. Cloud is clearly suffering from some serious coordination issues (maybe darts make him nervous, or maybe drinking “something hard” before trying to aim wasn’t a good idea?) because aiming is… quite difficult for him. 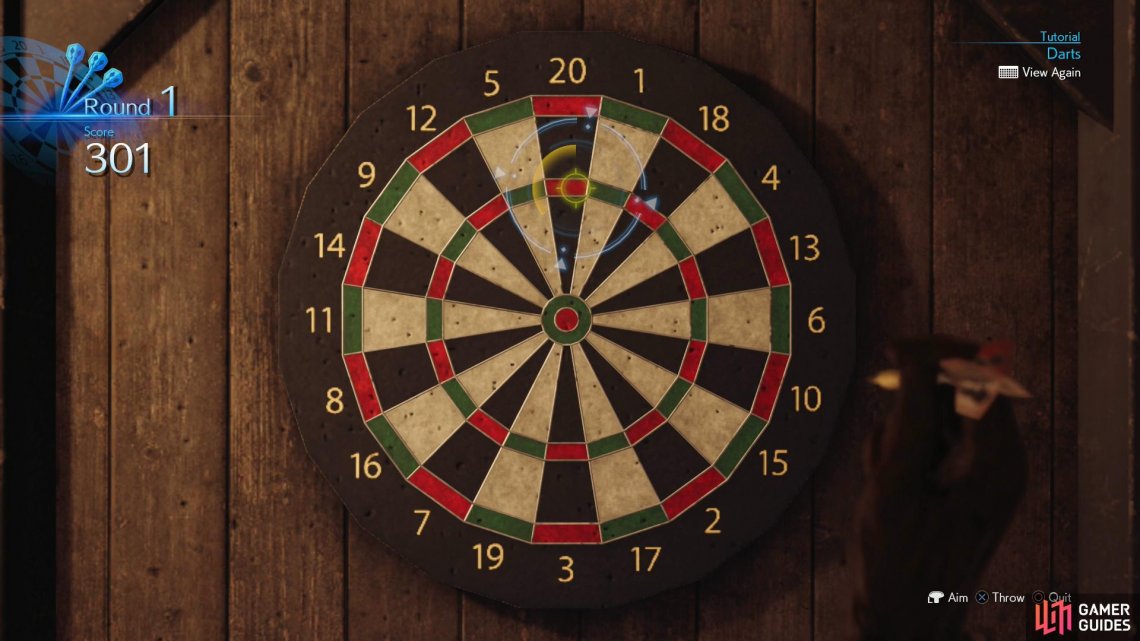 Between fighting against your reticle, waiting for the accuracy ring to get small enough and a time limit, hitting your target is more trouble than it may initially seem.

The game makes this task more difficult in several ways. First, your aiming reticle appears at a random point on the board each throw, and will tend to drift (seemingly towards its starting position) as you move it towards your target. For us, if our target was close to where our reticle appeared, or if the reticle appeared horizontally or vertically aligned with the target, it was pretty easy to hit whatever we were aiming at. If not… not.

Second, the aiming reticle consists of three rings - the central, static ring is just there for targeting purposes, the middle ring is a timer, and will deplete - if it fully depletes you’ll throw the dart wherever you happened to have the reticle at the time. The outer ring is the potential impact area for the dart, and this will shrink to near pin-point accuracy and expand to cover the majority of three slices as you aim. Given the timer, each dart throw gives you maybe three moments of good accuracy.

To summarize you’ll need to move the reticle over your target while said reticle resists your attempts to various degrees, and wait for the accuracy ring to become small enough to reasonably hit your target, and do this before the timer expires. This is mostly skill, or at least, skill can override other considerations, but we’d be lying if we didn’t admit that the RNG that determines where the reticle spawns and where the dart actually lands doesn’t play a role.

Perhaps the most important advice we can give, however, is a matter of technique, not strategy. Set the controller down on a hard surface, if possible, and manipulate the left analog stick with your index finger and thumb - doing this allows for far more precise movements and makes hitting your target much easier. If you just hold the controller in your hands and use your thumb as normal, your movements may be somewhat jittery… at least, ours were.

Aim for high point zones on your first few darts and if pulling out a victory in seven darts doesn’t seem likely, press [CIRCLE] to exit and try again. You can attempt this as many times as you wish, but if you don’t succeed now, you only have a limited window in Chapter 4 to try again, after which it’ll be a long time before you can make another attempt. If you succeed you’ll score some Luck Up Materia at the end of Chapter 4 and earn the trophy Heavenly Dart Player.

Keep at it and don’t get discouraged! It took me (Haeravon) 40 minutes to finally accomplish this with a fairly dubious performance after a heart-breaking four 20x3 hits in a row a few attempts earlier. If we could do it, almost anybody can. 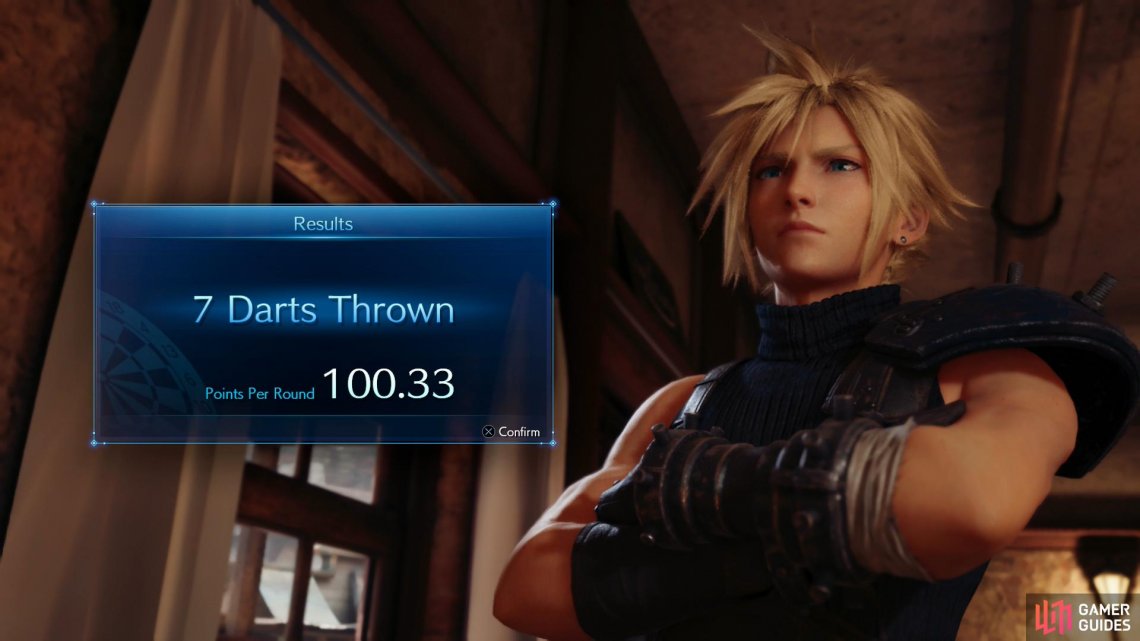