Before you can even attempt these battles, you’ll have to finish the game and gain access to Chapter Select, at which point you can access the Sim in Hojo’s Lab during Chapter 17. The battles from here on out are a lot tougher than the others you’ve fought, not least because you can only select the Hard difficulty mode, that means no Items and tougher enemies.

For this matchup, it’s Cloud alone versus the enemies that you fought in the main scenario from Chapters 16 and 17. To make life easier for yourself, slot Elemental-Lightning to Cloud’s armor which should be the Chain Bangle. Equip the Twin Stinger and if you’ve reached Weapon Level 6 by finding some Manuscripts on Hard Mode, be sure to purchase the Reprieve and Healing Spells MP Cost Reduction 20% abilities. As for Materia, bring along Healing, Ice, Fire, First Strike, ATB Stagger and some HP and MP Ups if you have the slots free.

The first battle is against an Unknown Entity and an Enhanced Shock Trooper and provided you’re Level 50 and have First Strike set, you should be able to end the battle in seconds. As soon as you can, use Triple Slash against the Unknown Entity and if you’re quick, you should be able to get a few strikes on it to follow up with another Triple Slash before it can get off Thundaga. At this point, the Enhanced Shock Trooper should be almost defeated too but still take care to avoid Twister which will hit hard if you’re caught by it.

The second round is against a single Zenene, one of the mutated life-forms you faced in The Drum. You’ll want to end this battle as quickly as possible as both Ghenghana and Mephitic Shower will inflict Poison on you so start the battle with a Triple Slash and then follow up with regular strikes, mixing in Punisher Mode counter attacks to deal with this rather simple foe. You should be able to save some MP in this battle for later rounds. 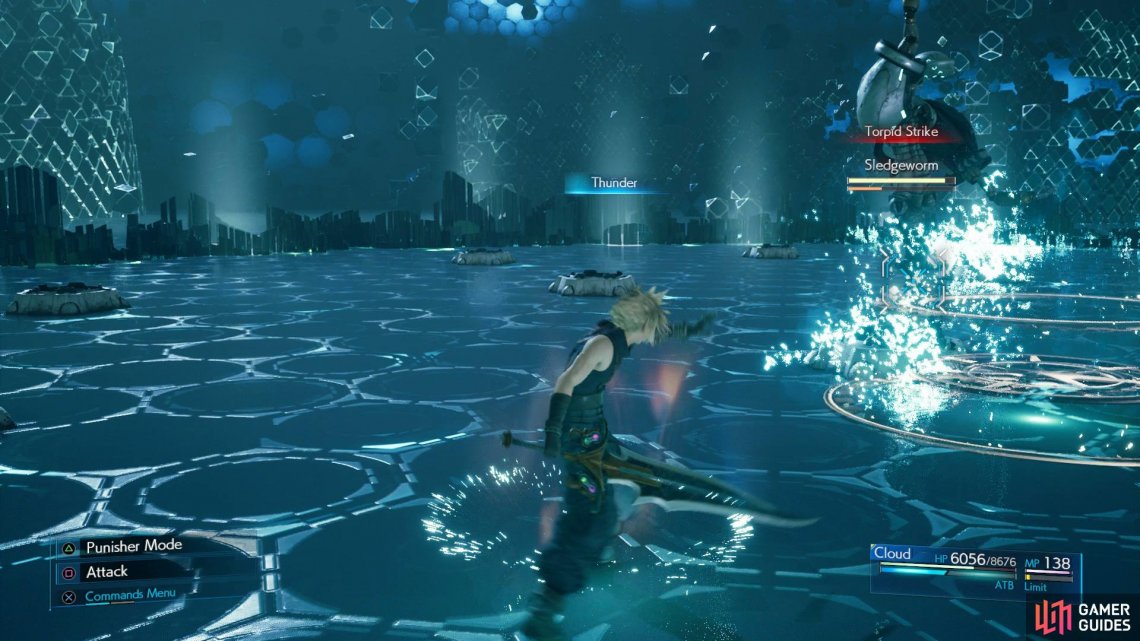 Dodging Torpid Strike gives you time to strike it with Thundara.

You’ll be up against a Sledgeworm for the next battle and you’ll need to exercise patience to deal with it as it warps around the battlefield. Only go in for regular strikes while it’s moving about and save your casts of Thundara(ga) for when it starts casting an ability, this will stun it and allow you to close in to attempt to Stagger it. The most important ability to watch out for is Torpid Strike, if you’re caught with this, it will inflict Slow which will then see Sledgeworm follow it up with Killing Blows which will deal significant damage.

This ability is however the best time to strike it with Lightning spells, you’ll have more than enough time to get off Thundara if you avoid it. Take care not to waste your ATB charges on it while it’s moving around, it’s not as easy to build the charges in this battle.

You’ll face an Armored Shock Trooper in the fourth round and it’s weakness to Lightning makes it a prime target for your Thundara(ga) spells, provided you have First Strike set, you can begin the battle with a cast of it to get things started. The Armored Shock Trooper’s attacks are slow and predictable so you can easily counter them with Cloud’s Counterstance ability, making this battle a lot easier than it may seem at first. Once you do manage to Stagger it, consider tossing out Thundaga to kill it outright. 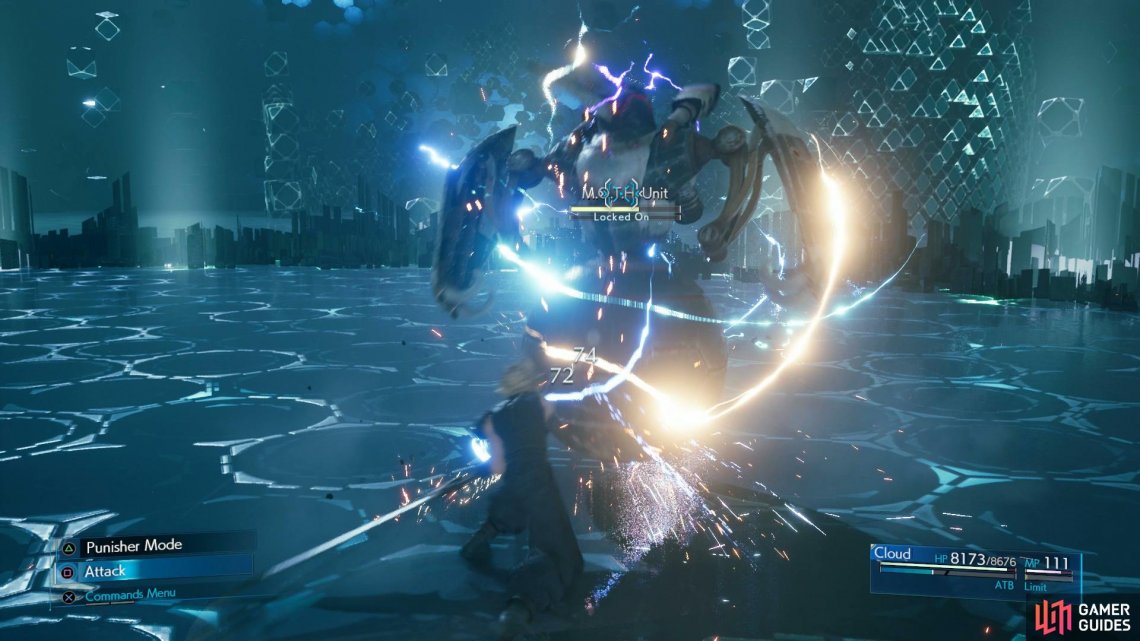 When you spot the electrical currents, it’s safe to close in for melee attacks.

The final battle is against a difficult M.O.T.H. Unit and hopefully you remembered to set Elemental-Lightning to your Armor as it’ll make this battle a lot easier. With this setup, you’ll be able to nullify or even Absorb most of it’s attacks outside of Drillstrike. Both High Voltage and Ultrahigh Voltage will deal significant damage to you if you’re not protected against it however following the attacks, M.O.T.H. Unit will become Pressured, this is the time to hit it with Thunder spells to bring it to Stagger.

Melee attackers have more trouble physically attacking the mech due to it’s rotating blades, in these situations, cast spells from afar and only wade into melee range once you see electrical currents around it, indicating that the blades aren’t rotating. Preparation is key for this battle, with Elemental-Lightning on your Armor, it changes a difficult battle into a rather simple one.