This optional Shinra Combat Simulator is a lot more difficult than the ones that came before it but the reward is well worth it, this one is any three characters versus an assortment of enemies. To make life easier for yourself, slot Elemental-Ice to Cloud's weapon and Elemental-Lightning to Tifa's while also making sure you bring along the Healing and Revival materias as items are forbidden. You may wish to ensure that every character has a copy of each of these Materias to help out.

A simple round to get you started, you'll be up against an Abzu Shoat, an enemy that shouldn't pose any threat at all, especially with a full party. Using Triple Slash with Cloud, Starshower with Tifa and Overcharge-Maximum Fury with Barret should end this battle in seconds.

Round Two sees you up against a Trypapolis and two Varghidpolis, your primary targets to begin with. This battle requires a little more thought than the previous round and although the Varghidpolis should go down quickly with casts of Blizzara and Cloud's physical attacks, the Trypapolis is more of a nuisance. These beasts have no weakness and even once you do Stagger them, they won't stay that way for long. They pose little threat and even their clones they spawn through Dance will go down quickly, you'll just have to persist with it taking a while to drain their HP. 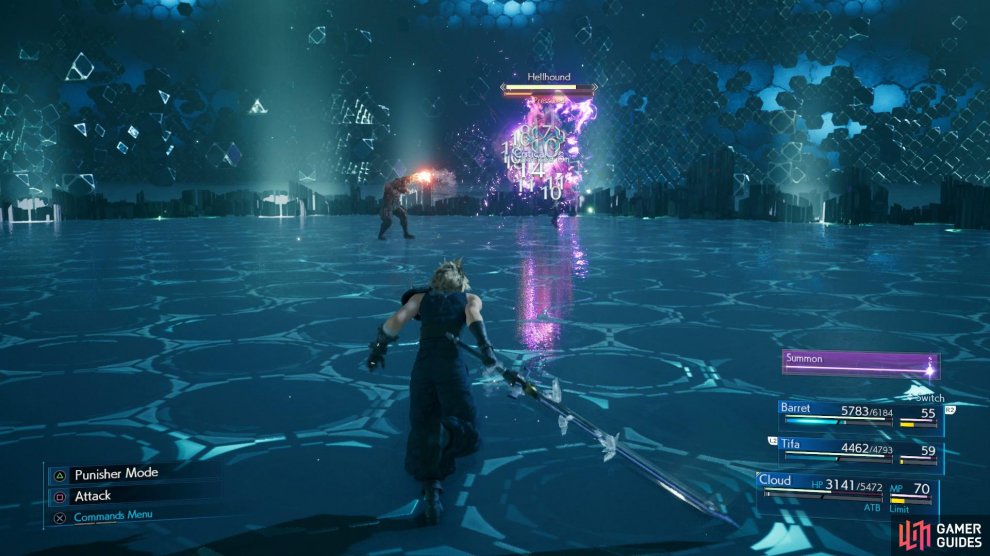 Round three is a tricky battle against two Bloodhounds and a Hellhound, the true threat here. Begin by dealing with the Bloodhounds with either Triple Slash or Ice spells so that you're left with just the Hellhound. You'll want to wait for it to use it's Purple Flame and then toss a Cure spell it's way to knock it down and Pressure it, allowing you to easily Stagger it. Be sure to switch over to Tifa/Cloud when one of them is trapped in Fatal Fangs to free them or you'll suffer significant damage. Hellhound will also toss out Infernal Eruption at Barret if you attack from range so don't let his HP drop too low.

You'll face a Smogger flanked by two Ringmaws who you should target first due to their Ice based weakness which you can exploit with Cloud's Triple Slash. Beware of Feast and strike the Ringmaw inflicting it so that the Bound ally doesn't take too much damage. The Smogger will cause a nuisance of itself while you're fighting this so it can be helpful to toss out Thundara with another character while fending off the Ringmaws. Beware however, if you defeat the Smogger first, back away to avoid taking damage from Self-Destruct. 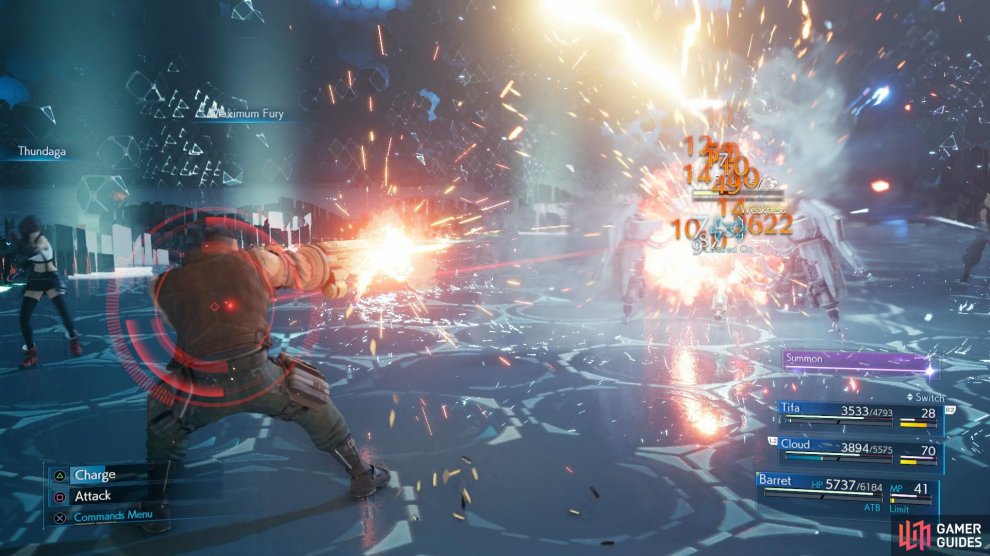 The final battle is a difficult one against a Sweeper Prototype and a Blast-Ray, the more lethal threat here. Focus on taking the Sweeper Prototype down as quickly as possible by using a combination of Tifa's Lightning infused Chi Trap and Starshower or by slinging Thundara spells at it. Once you're left with just the Blast-Ray, focus on striking it from afar with Barret as it will prevent melee characters from closing the distance with it's Electrical Discharge ability. Once you do manage to Stagger it, try and drop a Chi Trap next to it and continue to sling Thundara(ga) spells at it, you'll find that it should take around two Staggers to finish it off.