The squats minigame can be attempted in Chapter 9 during and after the quest Burning Thighs. To pass the aforementioned quest you need merely beat the first contender, Ronnie, and doing so will earn you the prize of 3x Mega-Potions.

This is merely an appetizer when it comes to squats, however, and squats itself is a pale shadow of an even more nefarious minigame awaiting later on…

In any event, after vanquishing Ronnie in the “Trainee” rank of squats you’ll unlock “Amateur” rank squats, and should you conquer Jay in that rank you’ll be able to challenge Jules in the “Pro” rank. The list of ranks and the rewards you’ll earn are as follows:

The rewards are… well, not all that great, all things considered, but for the trophy connoisseur out there, the trophy “Sultan of Squat” is the real prize. Don’t be fooled by the “Trainee” rank, however - the other ranks will take significantly more effort to pass. 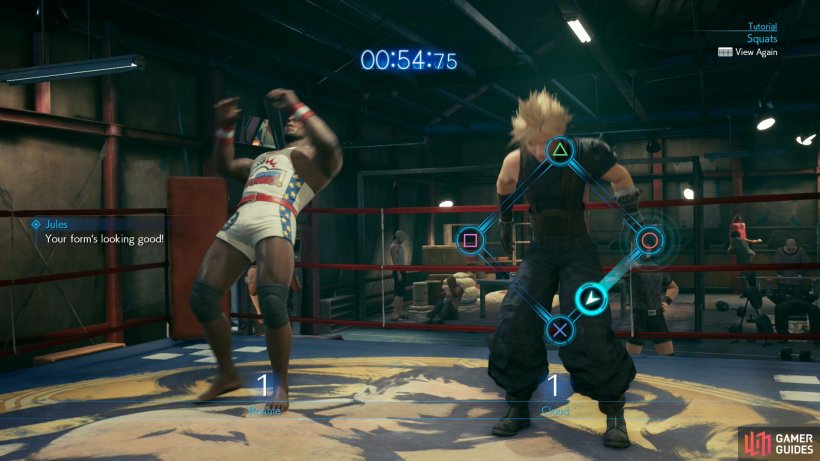 (1 of 2) During the first few squats you’ll have an on-screen guide. 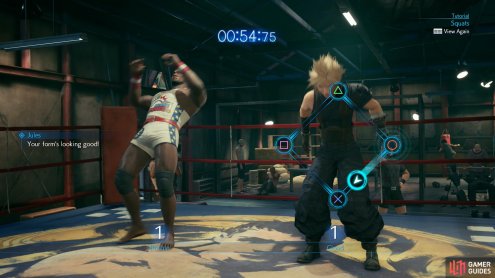 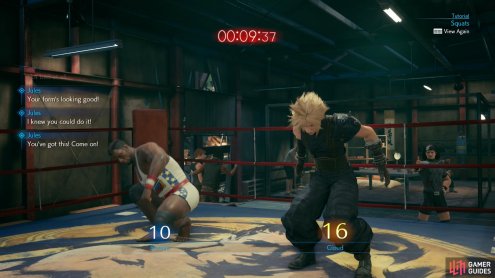 During the first few squats you’ll have an on-screen guide. (left), After a few squats, however, the guide will vanish and the speed will increase. (right)

The basics are pretty simple, you’ll need to press the [TRIANGLE], [CIRCLE], [CROSS] and [SQUARE] buttons on the controller in order. Each button controls a different sequence of the squat animation, and watching Cloud’s movements for the correct timing is important… at least for a time.

At the start of the minigame you’ll have a diamond button guide to help you with your timing, during which it’s hard to mess this up (not to say we still don’t manage, but that’s for lack of patience rather than out of ambiguity of when to press what button), but after a few squats Cloud will build up speed and the guide will vanish. This sounds scarier than it is, but honestly the guide will become redundant at best, and a nuisance at worst if it persisted. Cloud’s increase in speed is also not necessarily a negative, as eventually (after a dozen or so consecutive squats) he’ll shift between animations so fast that you can pretty much hammer out the squat combination as fast as you please. The tricky part is the middle, when the guide has faded but before Cloud’s at his full speed, as you’ll have to watch his movements and press the correct button in a quickening rhythm. 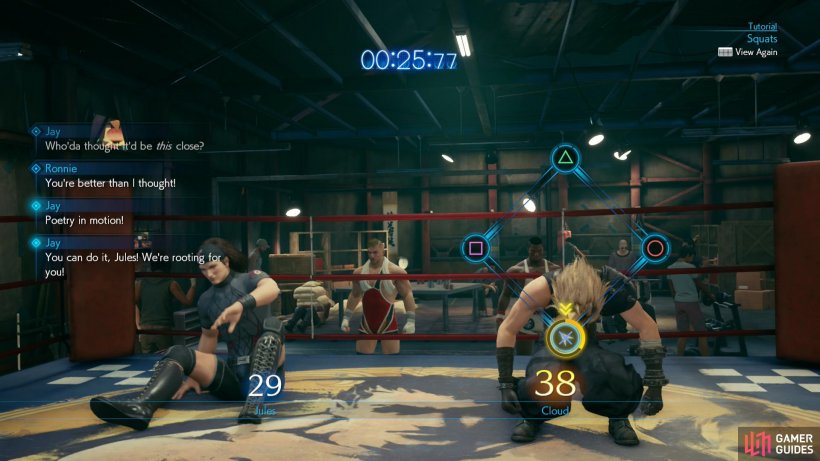 If you press the wrong button, Cloud will fall over, which can be catastrophic for your run. In “Trainee” difficulty you can recover in time to win, but in “Amateur” and “Pro” tournaments, the delay - and the fact that you’ll need to spend time rebuilding your momentum - will probably ensure you lose… unless you fall over at the end of an otherwise perfect competition. The biggest tip we can offer is that delaying is much, much safer than trying to go too fast and pressing the wrong button. Cloud won’t fall over if you take a moment to collect your bearings - in fact, he’ll stop his squat animation and wait for the correct button input, and this pause is a fine way to gauge the timing for those tricky button presses after the guide vanishes and before Cloud’s moving at full speed.

Aside from that, the only other major complication occurs on “Amateur” and “Pro” difficulty: Sometimes you’ll have to stop and mash the [CROSS] button before you can continue to the next phase of the squat. You get some forewarning when this occurs, as the guide returns and the [CROSS] button prompt flashes. Don’t press [CROSS] prematurely, and after you’re done mashing, wait for the guide to return to the [SQUARE] before starting your rhythm up again. 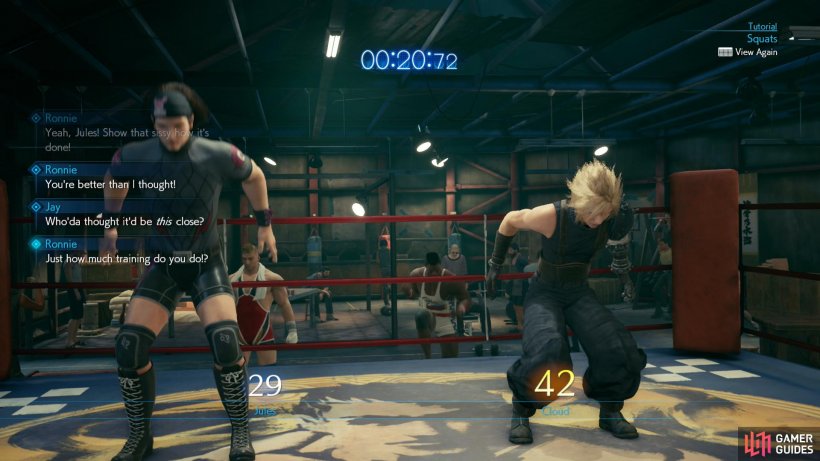 Text descriptions are fine and all, but you’ll really get the hang of this with practice. Still, we’ll try to provide some tips to help you succeed: