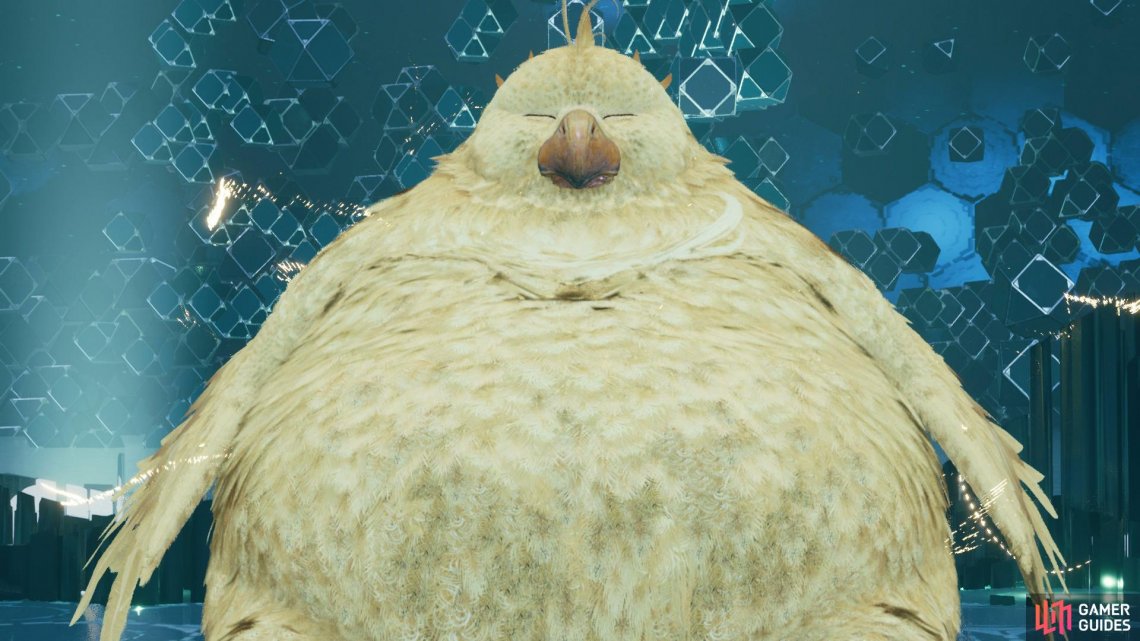 Your next dance with a Summon is the big-boned Fat Chocobo and this one is a lot easier to plan for than Shiva (and possibly an even easier battle too). There are no elemental weaknesses to plan for this time as the Fat Chocobo takes damage from any magic but is resistant to Physical along with all of it’s abilities having the Physical properties.

Make sure Aerith is in your party and be sure to buy and equip the Hardedge for Cloud found here in Wall Market. Be sure to assign the Magnify-Healing combo on Aerith to help and consider bringing Barrier along for the ride to help reduce the damage. Next, equip Armor that favors Physical Defense over ones that favor Magic Defense (such as the Studded Bracer). Finally on the agenda, it’s worth proceeding with the Main Scenario until you unlock the Optional Colosseum battles, here you can easily unlock Cloud and Aerith’s Level 2 Limit Breaks.

Fat Chocobo will start the battle showing off it’s enormous presence in the center of the arena. This may be one large bird but it’s not as difficult as it may look. To begin with, Fat Chocobo has no real weakness so it doesn’t matter what you hit it with, it’ll become Pressured regardless. Aerith is the ideal candidate for this with her Arcane Ward powered spells but only opt for the base version of the spells so that you can retain MP for healing if need be. 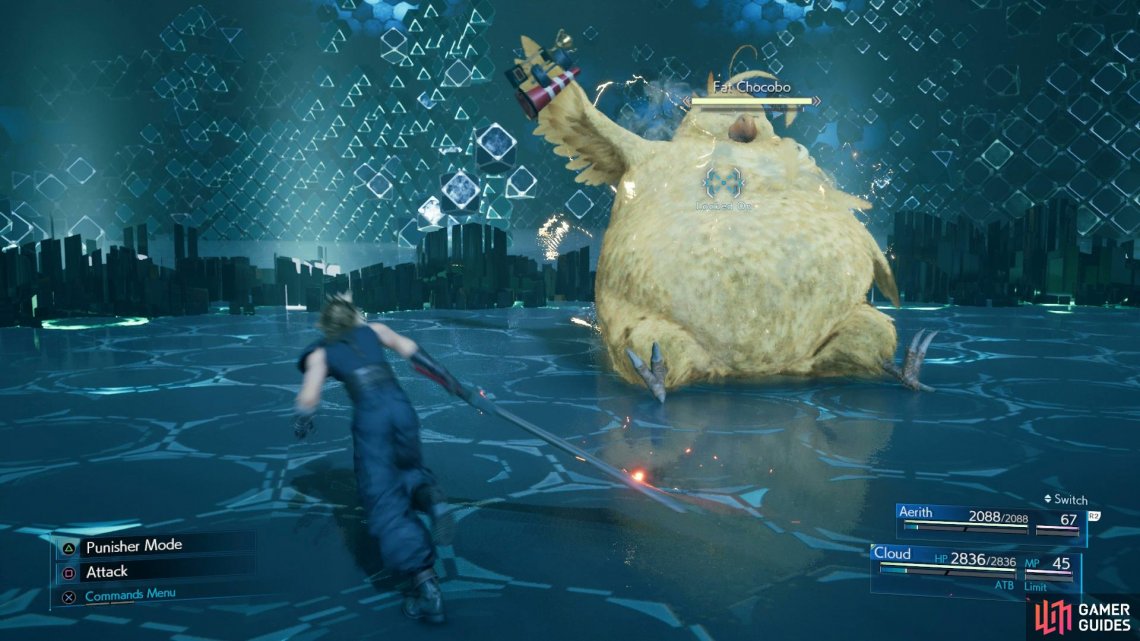 At the very start of the battle, the Fat Chocobo will only resort to tossing objects at you so close the distance and strike the side of it to avoid them easily. Shortly into the battle, you’ll notice a Moogle will appear to aid it in the form of Fingers crossed, Kupo!. The Moogle will then proceed to summon a creature at random - a Bomb, Tonberry or Cactuar - and you should turn your attention to these foes and take them down as quickly as possible. They have less than a 1000 HP so they shouldn’t take too long to take down but keep an eye on the Fat Chocobo’s position and watch out for Kweh kweh!, an ability that will see this oversized Chocobo hurtle towards you, it’s better to Guard against this rather than dodge and it will end this attack by bouncing three times.

The Fat Chocobo is at it’s most vulnerable following this ability so keep attacking by using spells to pressure and Cloud’s Focused Thrust to drive up the gauge, once it Staggers, this is your chance to follow up with Infinity’s End as it will stay staggered for a long time. If you’re in Punisher Mode here, you should be able to charge the ATB fully a second time and get a second Infinity’s End in, taking it’s HP down to well below half.

If you’re fortunate enough, the Fat Chocobo may follow up with another Kweh Kweh! allowing you to strike it when it’s vulnerable again, this is usually enough to Stagger it again and finish it off however sometimes you won’t be so lucky. At this stage of the battle, the Moogle will toss out more than one enemy at a time and if you have your Summon Gauge still available, now is a good time to call on the extra aid. The Fat Chocobo will also begin using the Bombs Away ability, tossing large bombs that explode and do major damage, do your best to avoid these or get ready to prepare a heal straight away. 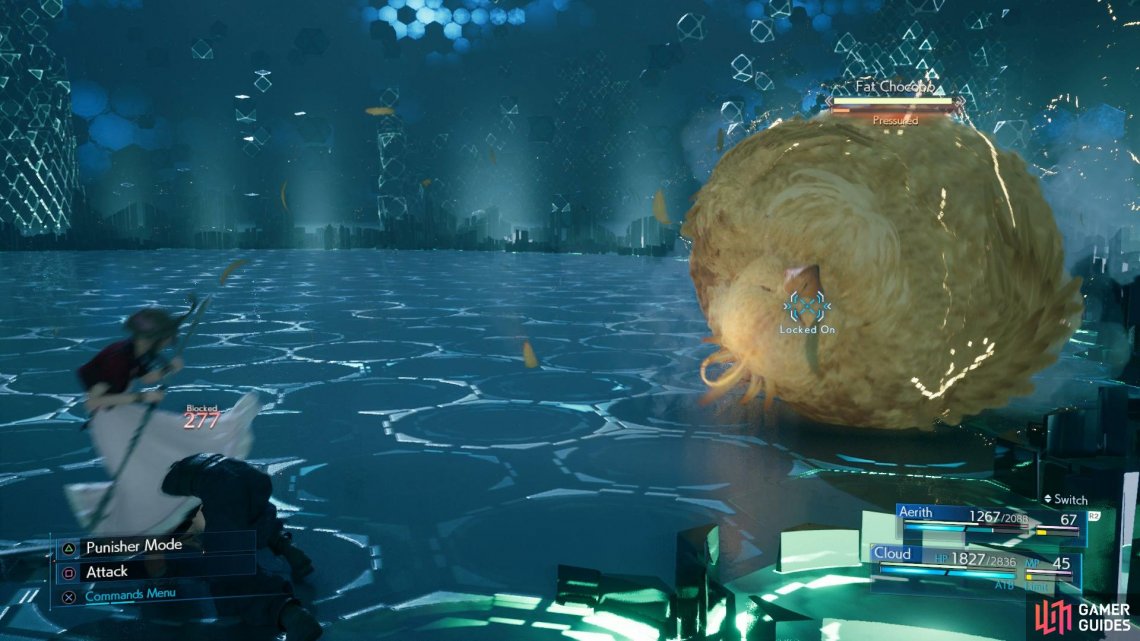 This is a battle that isn’t overly difficult, especially once you learn that it’s simple to Stagger it following it’s rolling attack. Two Staggers are usually enough to bring it down and saving Ifrit for when the Moogle goes crazy summoning additional enemies, you should have no issues. Your reward for victory is more shiny Materia, the Fat Chocobo summoning materia.

Tip: This battle, on the Hard Difficulty, is the easiest way to obtain the Staggering Feat Trophy. The Fat Chocobo will stay staggered longer than any other enemy in the game and has the HP to survive your attacks. Use a combination of Tifa’s chi abilities and True Strike and Aerith’s Ray of Judgment to drive the gauge well above 300%.