Chapter 8 is a long one. Not only will you have to trudge through the Scrapyard and defeat two bosses, but this chapter sees the return of side quests, and in Hard difficulty, that means Manuscripts. Up until this point Cloud, Barret and Tifa could have earned three additional Manuscripts in Hard difficulty. Aerith can earn five by the end of this chapter, and four of them will come from side quests.

Note: We use the Reinforce Staff until Aerith gets enough SP to switch to the Silver Staff, which, once upgraded, will be her weapon throughout the rest of Hard difficulty. 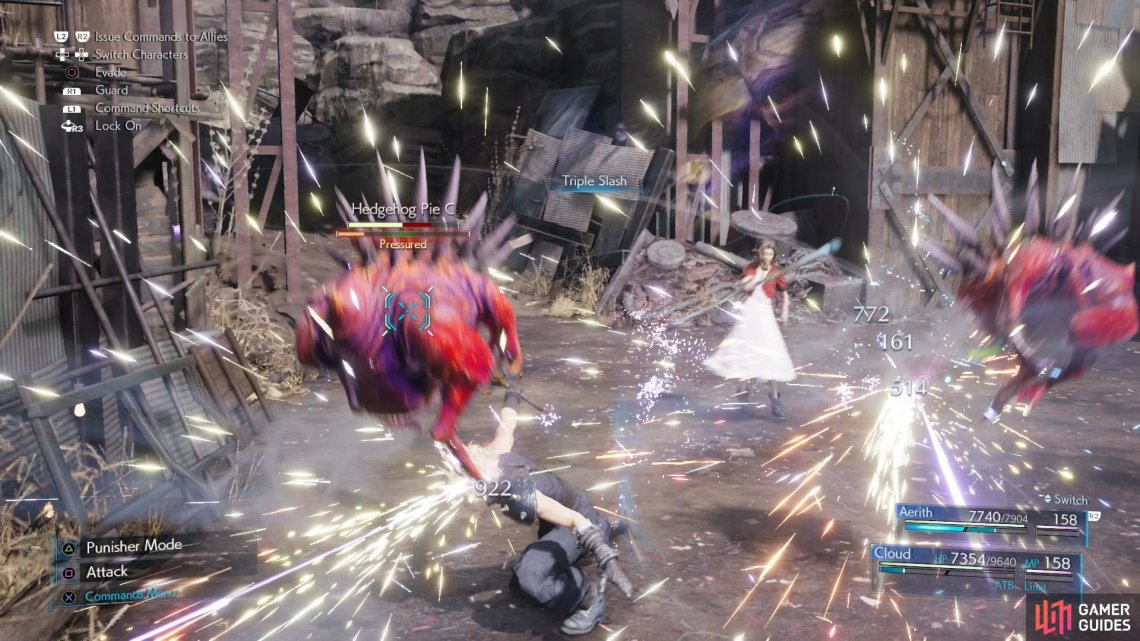 (1 of 3) “Triple Slash” will clear out groups of trash mobs quickly and painlessly. 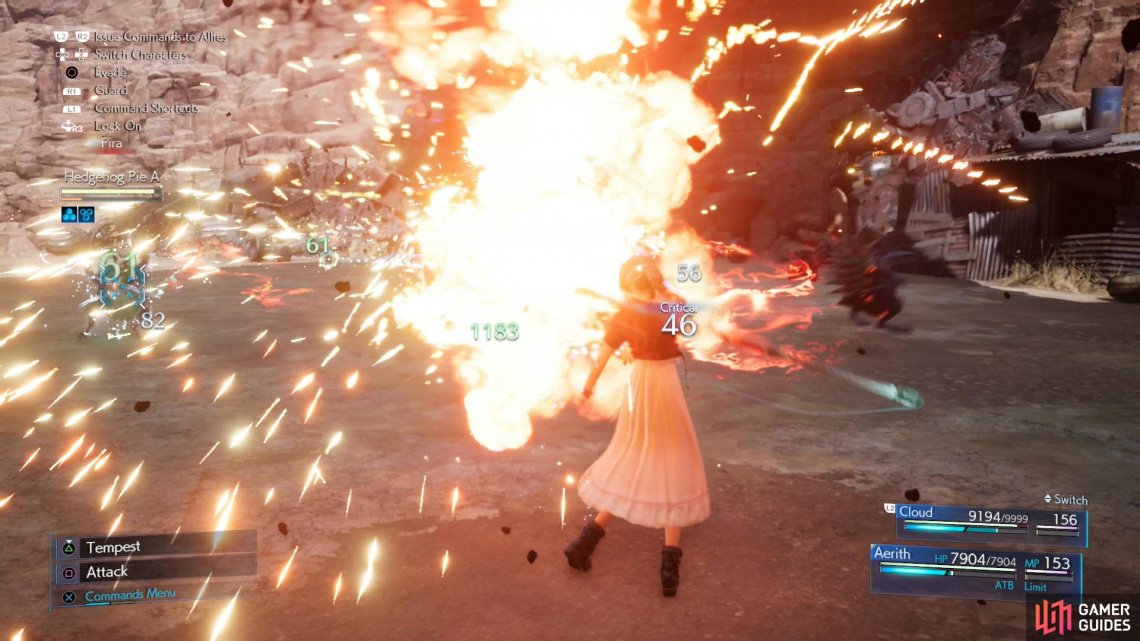 (1 of 4) Fire + Elemental will once against neutralize the attacks of the Hedgehog Pies,

This quest plays out just like the normal mode quest, culminating with a fight against the Hedgehog Pie King and his two accompanying Hedgehog Pies. Now that you’re in Hard difficulty - and you presumably have access to all the mastered materia the game has to offer - this fight should be even easier than it was in Normal difficulty. Equip Aerith with Ice + Magnify and both of them with Fire + Elemental to mitigate (and hopefully absorb) enemy fire magic. This should leave them with only their annoying - but relatively weak - “Bounce” attack, and Aerith should be capable of ripping through their defenses by casting Blizzard, regardless of what buffs the Hedgehog Pie King bestows. 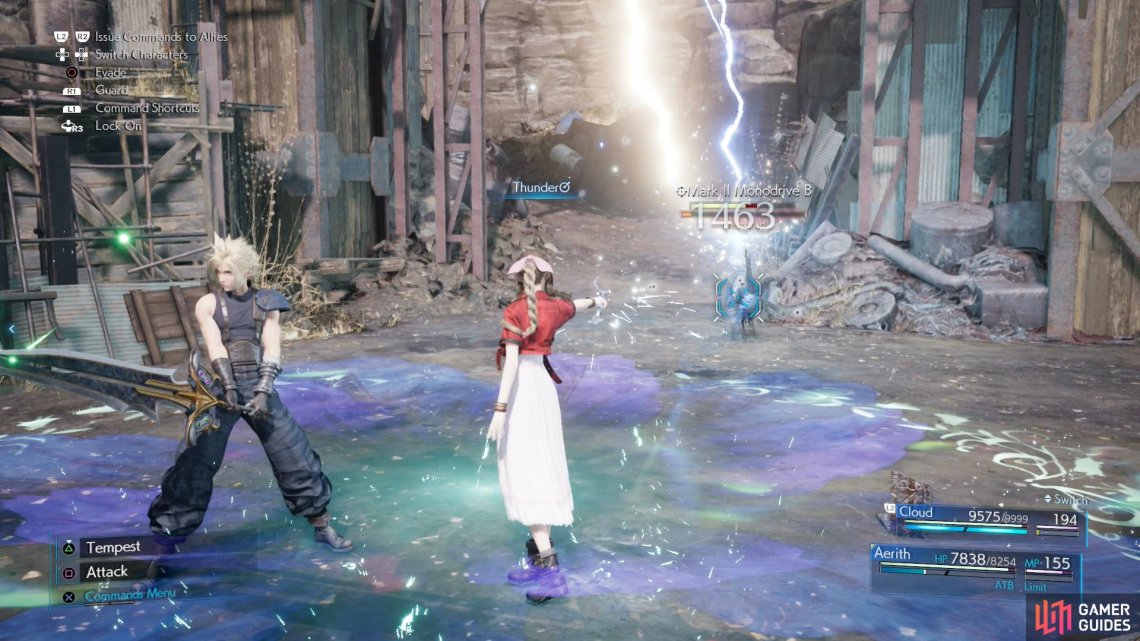 (1 of 3) Use magic when the Monodrives are protected by their transparent barrier,

To defeat them you’ll need to pay attention to what barriers they’re using and respond with magic or melee attacks. If they’ve got a green rings orbiting them, use melee attacks, if they’ve got a translucent shell, use melee attacks. They’re weak to wind, but Aero is notoriously unreliable, so you’re probably better off sticking with Fire or Thunder. Aerith should use “Arcane Ward”, one of the aforementioned elements, and perhaps Magnify, while Cloud might want to rely on “Triple Slash”. In the latter case, it’s not perfect, as hitting a barrier will terminate the attack, but they move around a bit much for many other attacks, so… it’s probably the best of several bad options. 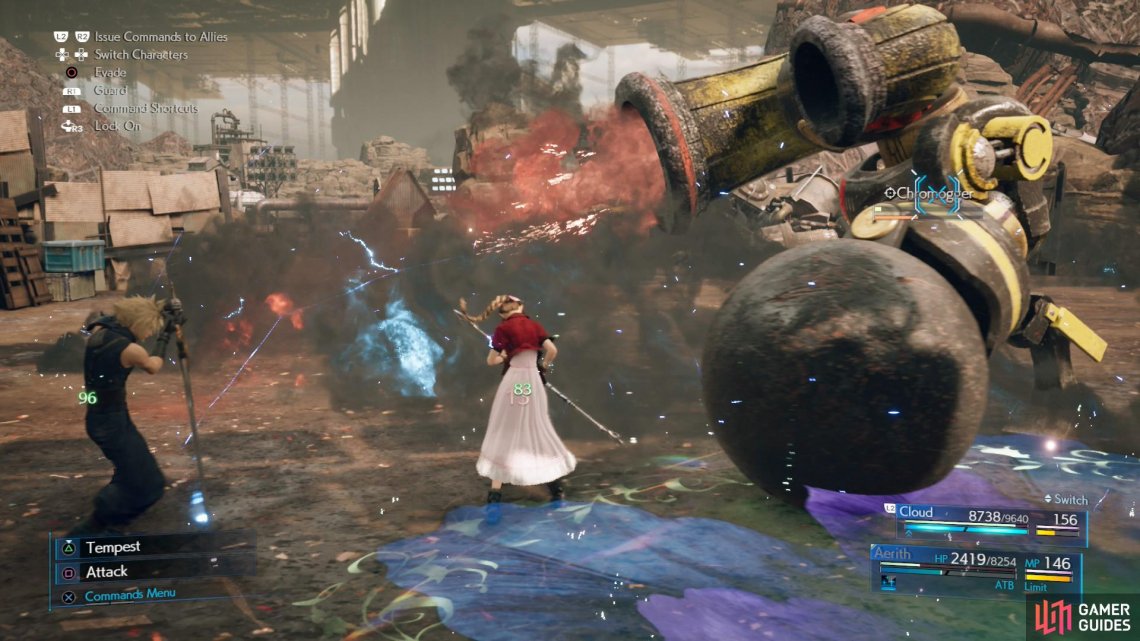 You’ll nee to complete Angel of the Slums before you can start this quest, and since they both give Manuscripts you’ve got good incentive to do so. This quest, aside from the tedious chatter at the beginning, is essentially the fight with the Chromogger.

Chromogger is just as much of a brute this time around as last time, and its “Skull Cracker” attack can deal massive damage if it hits. We’d recommend against this, and frankly, it’s just safer and more productive to control Aerith for this fight. Lay down an “Arcane Ward” and pelt the Chromogger’s “Iron Sphere” with Thunder (consider using Lightning + MP Absorption for this fight, as it’ll keep Aerith’s MP topped off) until it’s Staggered, then have Cloud deal what damage he can. Don’t be fooled, though, Aerith will certainly be your main source of damage this fight. Chromogger can emit two types of mist, a red mist which induces “Silence” and a blue mist that can stun. The former it’ll discharge directly in front of it, while the latter will be spread in a wide circle around it via its “Whirling Smokestack” attack - the size of the battlefield can make the circle of blue mist difficult to avoid, and if you end up stunned expect Chromogger to hit you with “Skull Cracker”.

Not a hard fight, but you do sometimes have to keep moving instead of indulging in offense of your own, although you shouldn’t need to take any preventative measures against the mist Chromogger spews - it should be easy enough to just evade. 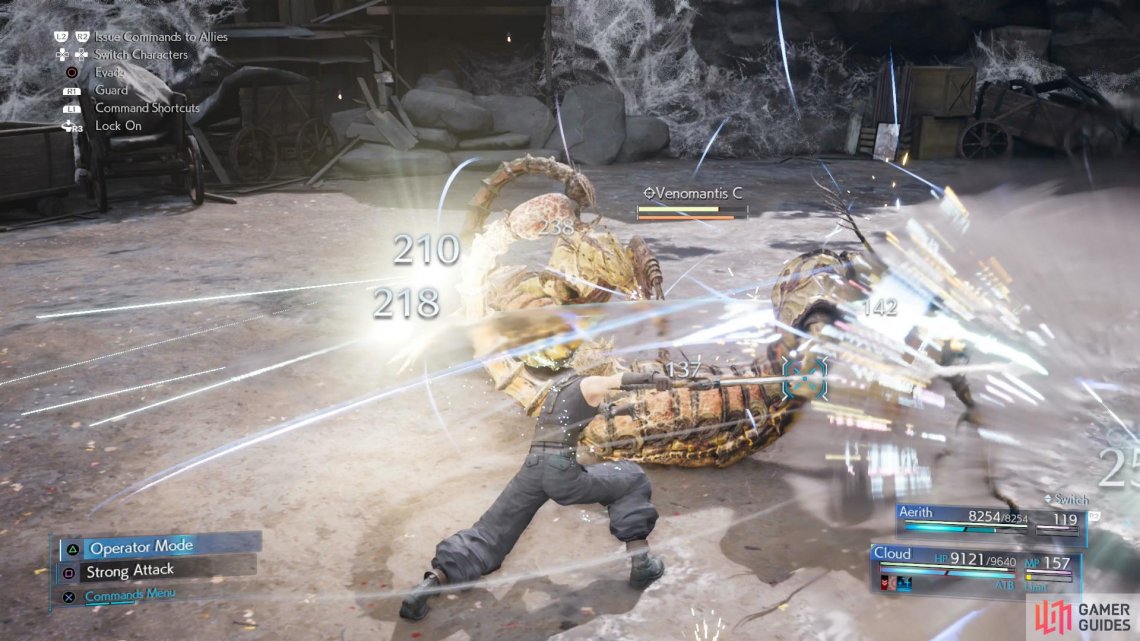 (1 of 4) Protected from “Poison” and “Sleep”, Cloud can safely block and counterattack the Venomantis enemies.

To start this quest you’ll have to complete the quest The Mysterious Moogle Merchant by buying the Moogle Membership Card for one Moogle Medal, after which you’ll be able to buy the Graveyard Key item for another Moogle Medal. After this you can fight the three Venomantis foes that make up the meat of this quest.

We won’t lie, this quest gave us hell in Normal difficulty, but in Hard difficulty, you have the resources to make it much, much easier. They can inflict “Poison” with their “Sickle Swipe” and “Leaping Slash” attacks and worse still, they can inflict “Sleep” with their “Torpid Sting”. If deprived of these two debilitations, however, there’s little they can do against you, as Cloud can block and counter all their attacks in Punisher mode. To counter these threats we equip Poison Materia + Warding Materia and Headbands on both characters. Ice + Magnify on Aerith is also a good idea, and while not necessary, Ice + Elemental on Cloud’ weapon will increase his damage output.

Once prepared, head to the Slum Public Cemetery and engage the three Venomantis’s. This fight, if you prepared, is pretty simple. Just switch to Punisher mode and block with Cloud. When he has ATB segments to spare, use “Triple Slash” or, if one of the bugs is “Pressured”, use “Focused Thrust”. Aerith should be allowed to idle under AI control, casting Regen on Cloud when she has the ATB (and perhaps Cure, if he’s taking too much damage) or unleashing a Blizzard + Magnify combo, as the situation warrants. Hit Staggered bugs with “Braver” and the fight should end before too long.