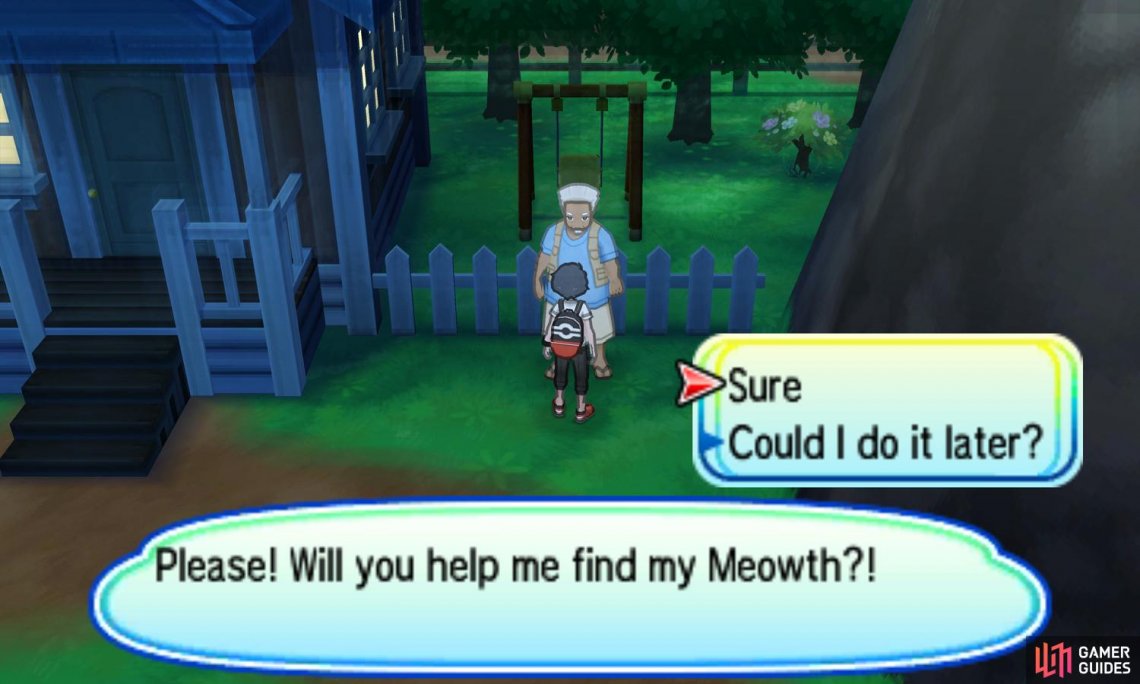 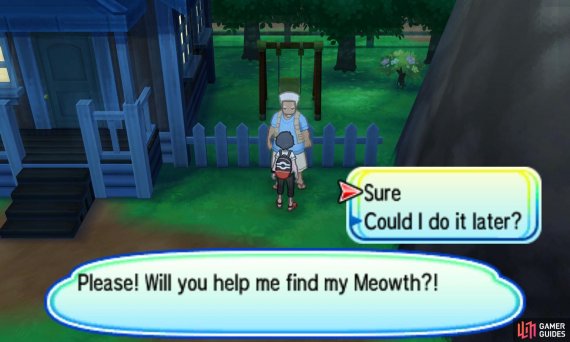 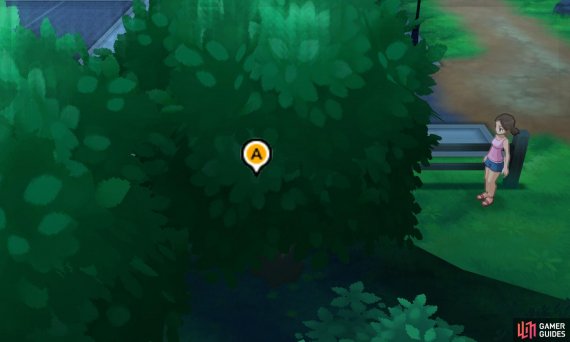 Starting from the Hau’oli City entrance, hurry north, to the top of the slope. Using Tauros, smash through the boulders to the left, then pick up the Star Piece at the end of the path. Back on the main path, follow it north towards the broken crossroad. From the crossroad, go east towards the house south from the Berry Fields.

To the right of the house’s entrance is a man staring at the garden swing. Talk to him to discover his dear Alolan Meowth has done a runner. Return to the crossroad and head west into the motel car park. Make your way to the truck that’s parked in the north-west corner, then inspect the front of the truck.

Pick the second option to rescue Meowth. If you accidentally pick the first option, it’ll run off elsewhere. Should that happen, go back to the crossroad, then head west below the fence. At the far end, obscured by the trees below, press the A button when the prompt appears to find Meowth again. This time, you can’t fail!

For your efforts, you’ll receive a X Speed, X Attack and X Sp. Atk. Next, it’s time to flip a coin… Heads we’re going west, tails we’re going east. Phew, it’s heads! Travel to the Big Wave Beach, past the motel, towards the far west. When you hit the sand, make your way to the west-most part of the beach, then speak to the youngster there.

Apparently ghosts have been sighted at the Trainer’s School… Why is it that we just can’t avoid ghosts? After receiving that disturbing report, return to the crossroad on Route 2, then head south-east towards Hau’oli Cemetery. Within, head for the center, where a Machamp holding a woman is standing near the left.

Listen to their tragic story to receive TM56 Fling. This extreme move makes your Pokémon launch their held item at their opponent, leading to a variety of effects depending on the held item. By the way, this causes the held item to be permanently lost, so try not to do it with an important item! At least not during the story.

Finally, head all the way to Verdant Cavern, the site of your first island trial. You can get there by following the path north from the crossroad on Route 2. Once you reach the Pokémon Center on Route 2, you’re basically there. Once inside, patiently navigate to the Totem’s Den at the far end of the cavern.

To the east of the Z-Crystal pedestal, there’s a slope full of breakable rocks. You know the drill by now; smash through the rocks with the aid of Tauros. After breaking the final pile of rocks, search around the outcrop below the broken pieces to find an Energy Root. Of course, don’t forget to grab TM46 Thief at the end of the path.

Thief is a sneaky move that lets you steal an opponent’s held item, provided your Pokémon is not already holding an item. Mega Stones and Z-Crystals can’t be stolen though. If facing a wild Pokémon, you can keep the stolen held item as wel! Anyway, after this little detour, leave the cavern the way you came.

Coming from Route 2, follow the path all the way round, towards the suspension bridge dividing the route, a short distance south from the Melemele Meadow entrance. From the top of the bridge, travel east towards the ledge overlooking the bay. Up ahead, you can smash through the rocks to uncover TM83 Infestation.

Finally exit to the south, back to Route 1. At this point, you’ve basically done a full loop of the island. If it’s nighttime, there’s one more place you can visit… if you dare! Otherwise, it’s time to proceed to the next island! 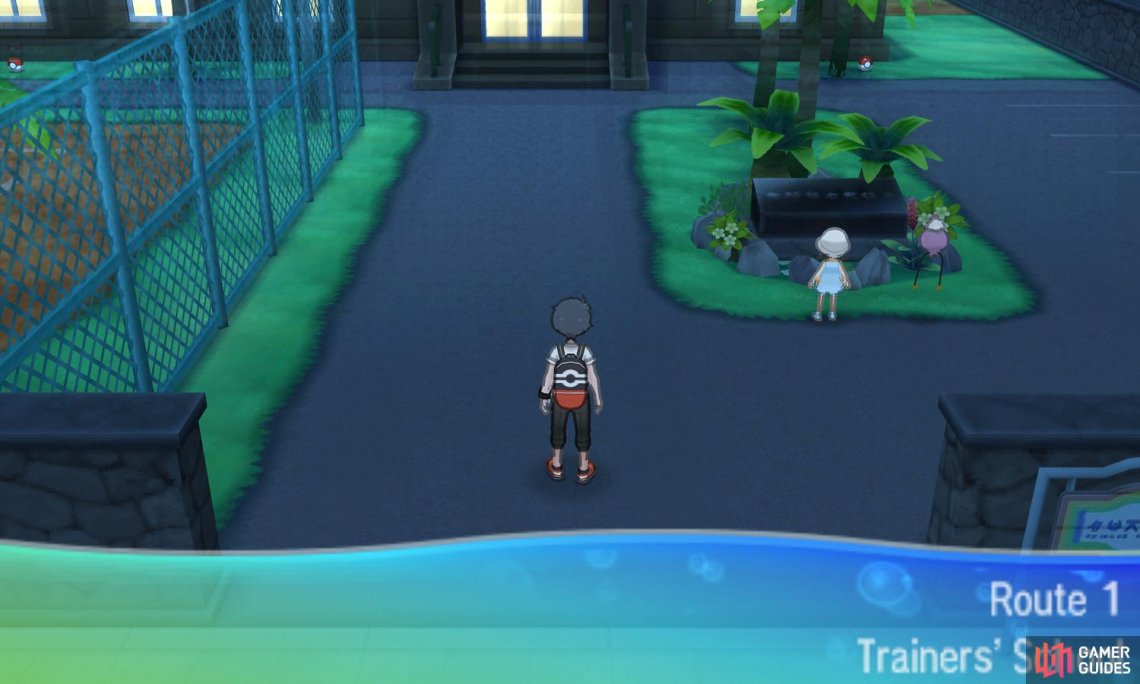 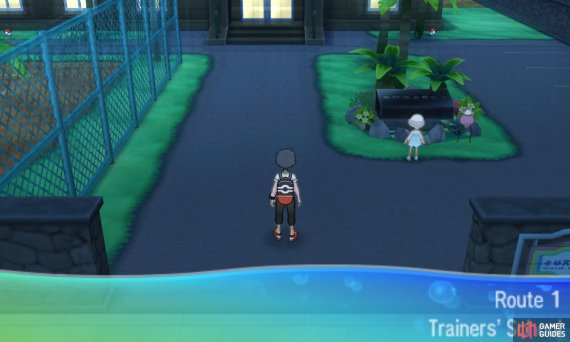 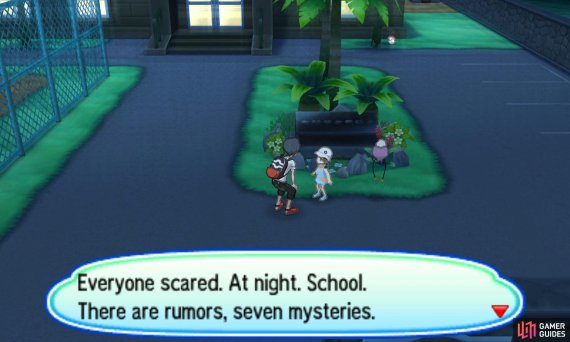 We’ve saved the scariest for last… for, um, no particular reason. After speaking to the youngster staring at the sea in Big Wave Beach, if you return to the Trainer’s School during the night, you can trigger a lengthy sidequest. From the entrance, there should be a little girl and her Drifloon. Talk to her and you can choose a mystery to solve.

Mystery 1: First approach the entrance to the school building. After that, you’ll be lead to check out the incinerator along the east side of the building. Poke your nose into things and you’ll be met with a battle.

Just a simple Growlithe. You can show it who’s boss with a Water, Ground or Rock-type. In case you missed it, you can catch and befriend a Growlithe of your own by exploring the tall grass in the northern half of Route 2.

Mystery 2: Enter the school building and go up the stairs to the very top floor. As you start to head west, you’ll hear a distressing sound coming from the lower floors. When prompted, run west and inspect the left-most locker.

Mystery 3: Enter the building again, but this time go up the stairs once. On the second floor, go inside the first room to the left. After you regain control, simply try to leave via the door.

Mystery 4: Once again, you need to be in the building. Go up the stairs. When prompted, go back downstairs. Next, head west along the corridor until you spot the noticeboard. Four shiny spots will appear at the far corners of the corridor. Touch them in this order: bottom-left, top-left, bottom-right, top-right.

If successful, you’ll be told to go downstairs. Whereupon you’ll be ambushed by a wild Gastly. This ghoul is Level 19, which is surprisingly high. If you didn’t catch a Gastly back in Hau’oli Cemetery and/or you’re lacking a strong party member, you could consider catching it.

Mystery 5: Head back into the school building and make your way to the top-most floor. To the left of the stairs is a mini-library. Inspect the book protruding near the corner and read its contents. Once you’ve finished, a wild Drifloon will attack. Again, it’s Level 19; catch it if you want.

Mystery 6: Return inside the building, then head inside the classroom on the next floor, towards the far west of the corridor. After entering, talk to all the schoolchildren, then once you’re done, speak to the teacher at the back of the classroom.

Mystery 7: You don’t have to do anything!

Solve all 7 mysteries and you’ll receive a pair of Wise Glasses. We think it’s wise to make a hasty retreat! Also, if you report back to the youngster in Big Wave Beach who gave you the tip in the first place, you’ll receive a Hyper Potion. What!? That’s not enough to make up for the psychological damage we had to suffer!