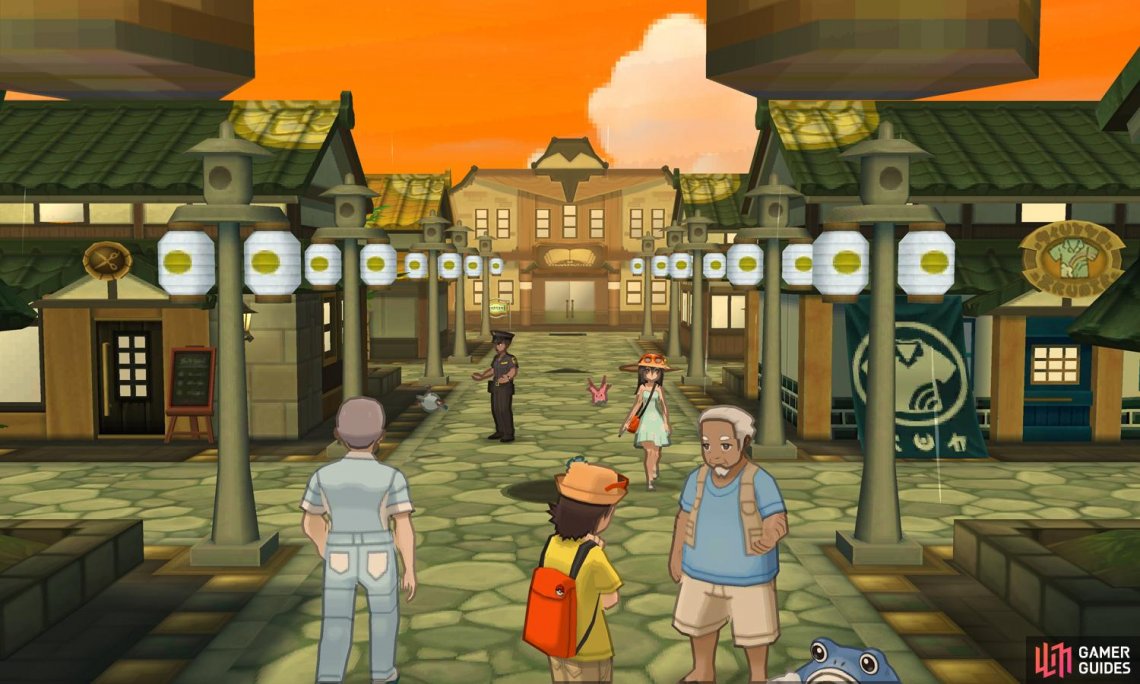 (1 of 2) It’s time to kick back after your tense encounter in Aether Paradise. 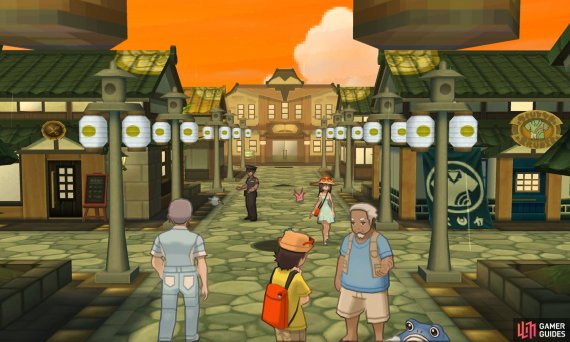 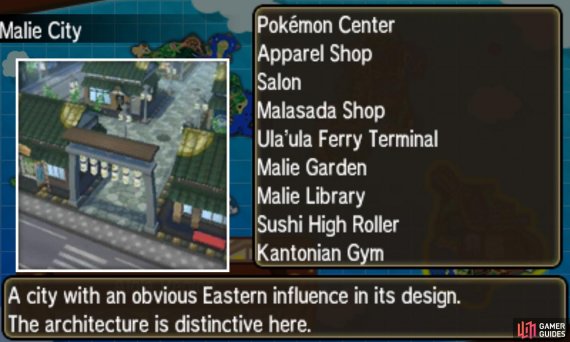 It’s time to kick back after your tense encounter in Aether Paradise. (left), (right)

Your Ula’ula Island adventures begin at the island’s one and only city. From where you arrive, start by heading east, back towards the ferry terminal. On the wall immediately to the right of the ferry terminal entrance is Totem Sticker #051 that you should peel off for good luck. Next, step into the building itself.

Inside, go north-east towards the man in red standing along the wall. You’ll receive a Nugget. Wow, the good luck is paying off already! Afterwards, leave the ferry terminal and travel west towards the rest of the city. After crossing the stair bridge, the city’s Pokémon Center is directly ahead. It would be smart to pay it a visit.

Inside, the right Poké Mart clerk is selling a new selection of TMs. Of the lot, Shadow Claw and U-Turn are probably the best buys. Of note, one of the Ula’ula island trials is the Ghost-type trial. So if any of your (ideally non-Ghost) Pokémon can learn Shadow Claw, it could come in handy during the Totem Pokémon battle.

Continuing west from the Pokémon Center, will lead you to Hau and his starter Pokémon blocking the road. Approach Hau and he’ll request a rematch. He might be blocking the road, but at least he doesn’t just up and surprise you with a battle like in Pokémon Sun and Moon! 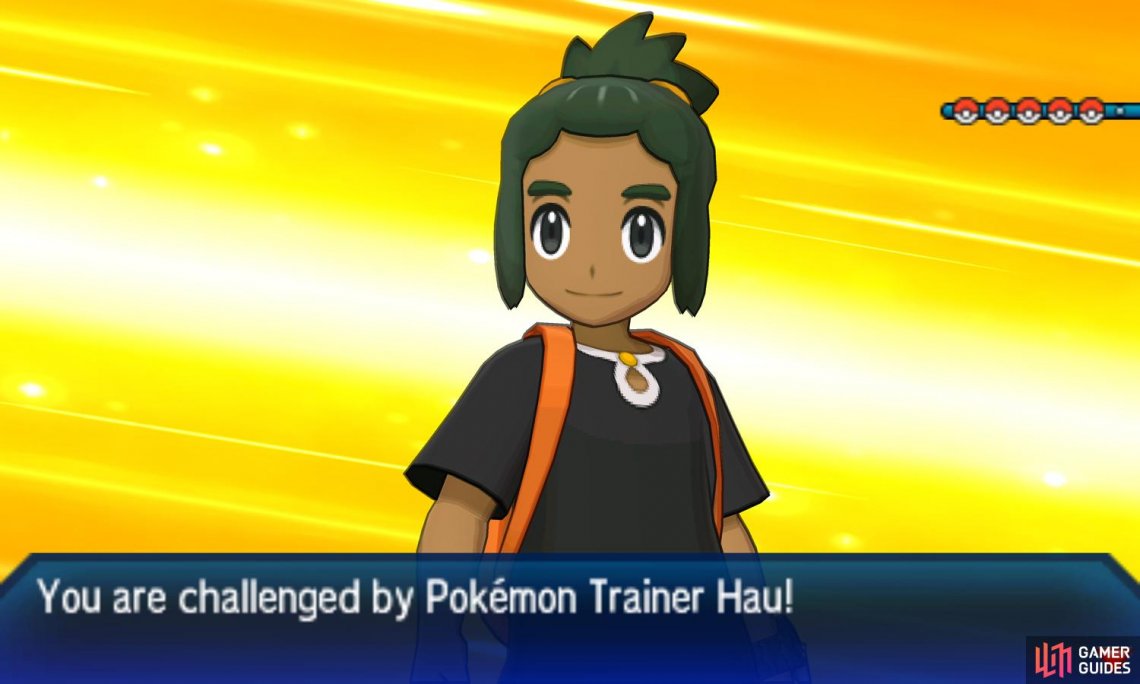 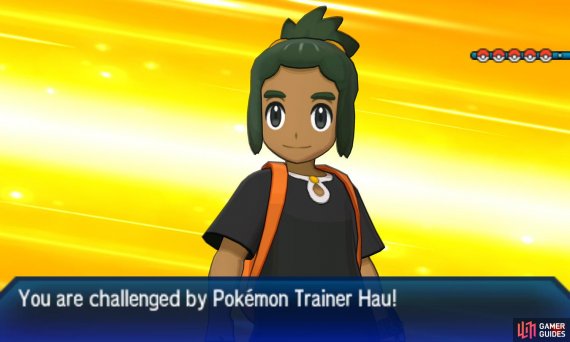 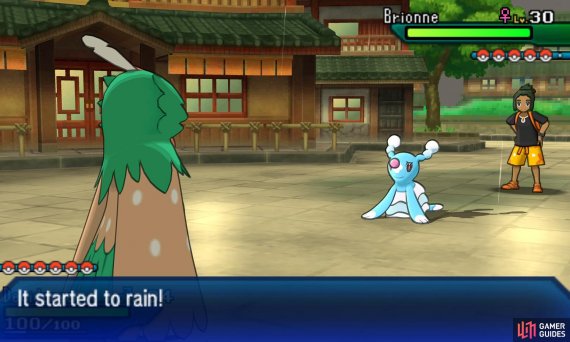 Wow, it’s been a while since you last battled against Hau back at Paniola Town. As before, he leads with his starter Pokémon, so you should do the same. Especially as his starter can use a STAB Z-Move. Just keep in mind that Hau is smart and will withdraw his starter if it’s disadvantaged.

Next, Hau has evolved his Eevee into the Type that’s strong against yours. Now that’s pretty smart of him. At this point, you’ll obviously want to switch your starter Pokémon out and replace it with a Pokémon that’s super-effective or at least resists the evolved Eevee.

His third Pokémon can be Noibat, which hasn’t changed much–and it can’t physically change since it evolves at Level 48, which is miles away. If you have any, blast it with chilling Ice-type moves. Rock, Dragon or Fairy moves are also good.

New to Hau’s team is Tauros, like the one Hala gave you to ride. Although it’s slightly intimidating (and literally has Intimidate to lower Attack), it’s not terribly hard to handle. What with it being a plain old Normal-type and having the pitiful Horn Attack as its only STAB move.

Finally, Hau’s Pikachu has evolved into the Alolan variant of Raichu. Of his Pokémon, this is perhaps the most dangerous, between its high Speed and powerful STAB Psychic and Electro Ball. Ground or Dark-types are ideal to inflict super-effective damage, and resist its moves.

By the way, note that it’s possible for it to rain in Malie City. If this occurs, be careful when facing Hau’s Water-type Pokémon, especially if he has Brionne. Even with a Pokémon that resists Water, a STAB Z-Move boosted by rain can deal a lot of damage.

Show Hau who’s boss (yet again) and you’ll receive a Lycanium Z that he doesn’t want. As they say, one man’s trash… This unique Z-Crystal can be given to any of the three Lycanroc forms, so long as they know Stone Edge. Afterwards, you can’t explore the city just yet. So follow Hau by heading north-west.