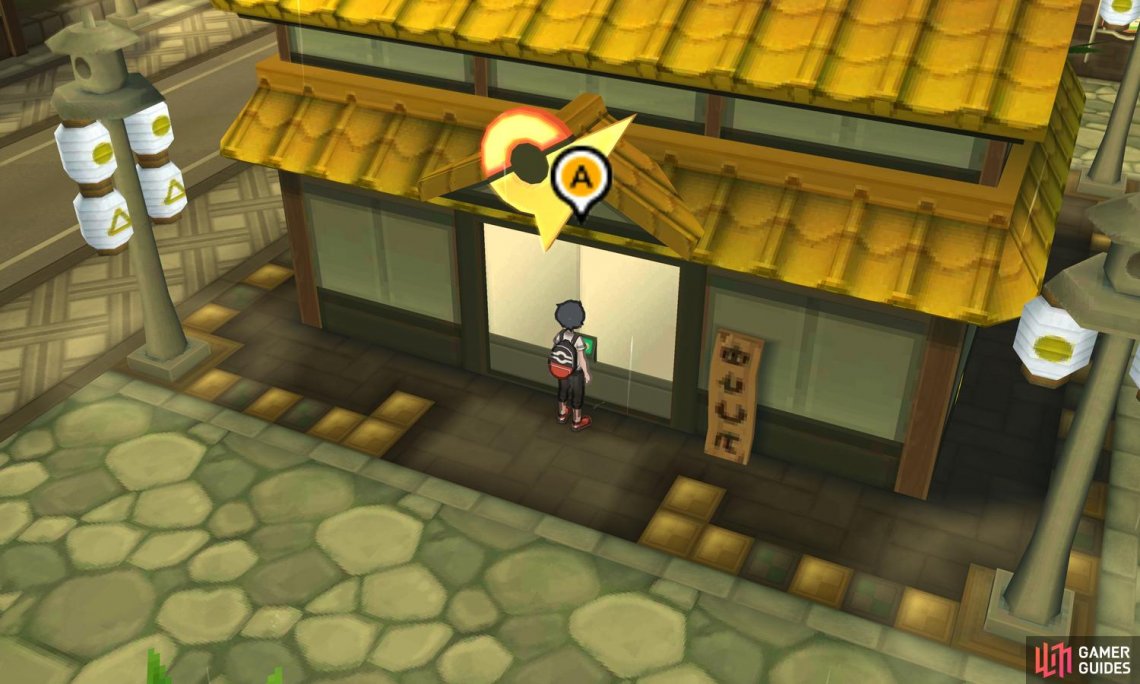 (1 of 2) Your Pokémon will appreciate the workout! 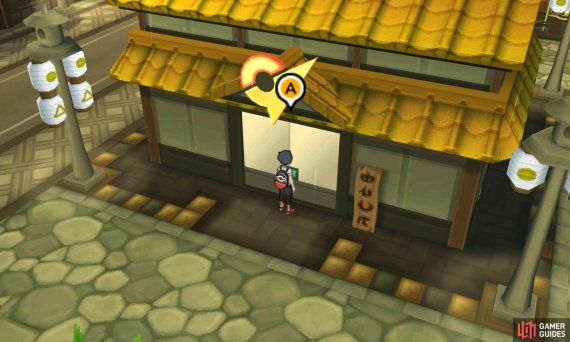 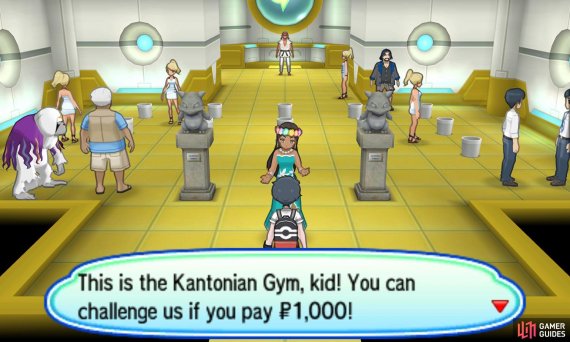 Your Pokémon will appreciate the workout! (left), (right)

In lieu of actual Pokémon gyms, this is a replica gym based on the Vermillion City gym in the Kanto region. Hence the name. Unlike the real version, there aren’t any bin-based puzzles here. All you have to do is defeat the 4 Pokémon trainers inside, who all look like beauties, at which point you can challenge the Gym Leader.

As you enter, you’ll be asked to pay 1,000 Poké Dollars for this extraordinary experience. Do so and you’ll receive a complimentary Soda Pop. From the entrance, head north, then challenge the first trainer on the right, who’s staring in the opposite direction.

Adrian has a baby Jynx. Just like the evolved version, it’s weak to Fire, Rock, Ghost, Dark and Steel-types. It only has a Psychic-type move, Heart Stamp, so a Dark-type is pretty much an automatic win.

Next, head west to run into the line of sight of the trainer above.

A weak Normal-type that you can catch in Malie City’s Outer Cape. As you’d expect, pretty much any strong Pokémon will send it crying home, but Fighting-types will make sure it does so in record time.

Now poke the trainer nearby to the west.

This unevolved bug is very straightforward to swat, especially if you have a Fire, Flying, Rock or Steel-type. Slower Pokémon should be mindful of its decent Speed. It also has strong STAB moves in Draining Kiss and Bug Buzz.

From here, go east towards the center of the room, then proceed north towards the Gym Leader. Once you’ve gone past the bins, there’s a trainer standing along the wall on the right that you’ll need to defeat to get past.

Again, this Pokémon has yet to evolve and thus provides little challenge, especially if you have any Fire, Ice, Flying, Poison or Bug-types. It does have Leaf Blade, as a strong STAB move, and Synthesis to restore HP, assuming you don’t one-shot it.

Finally, waiting at the end is the Gym Leader himself. If you bested all four trainers, he’ll eagerly accept a battle from you. Isn’t this just like the good old days? 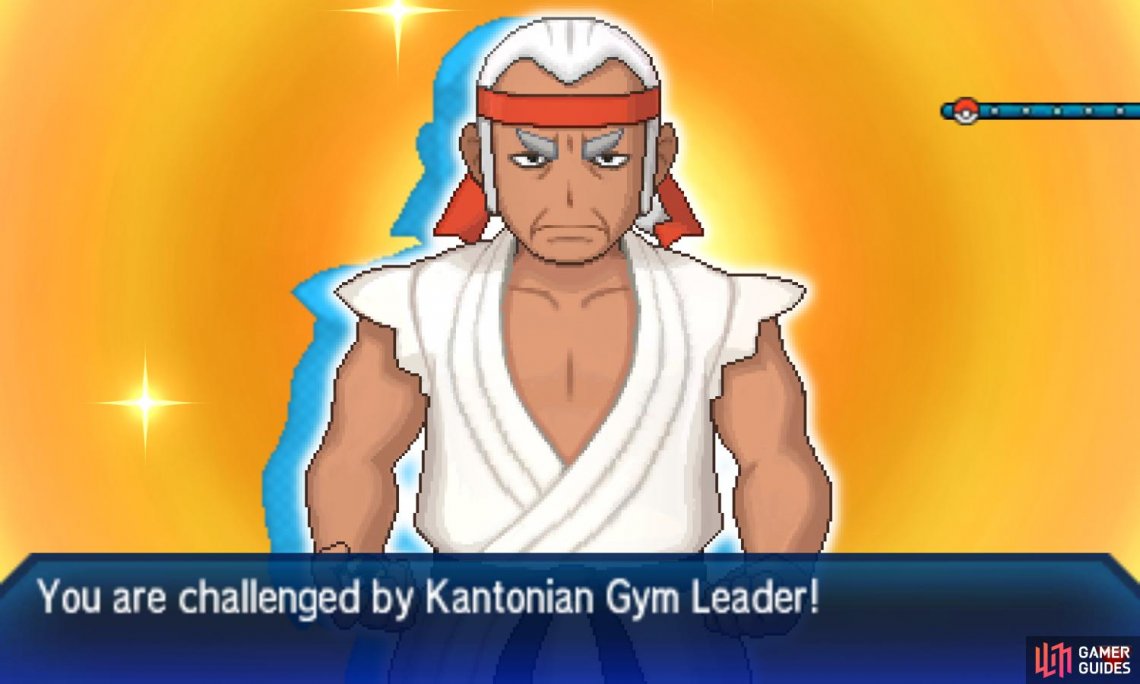 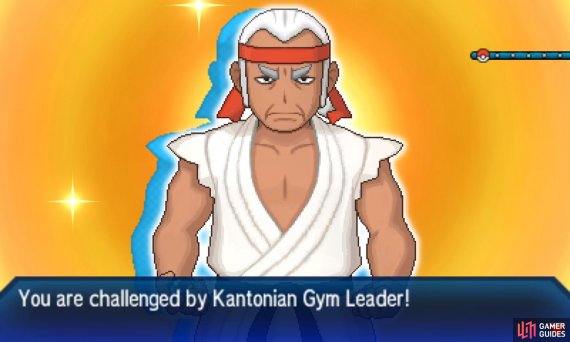 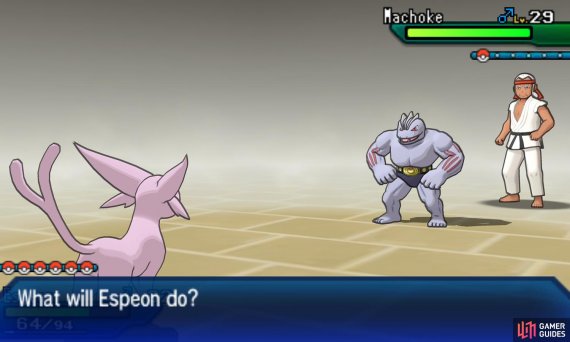 The middle evolution of Machop is a medium-level threat. It has a variety of strong moves, coupled with its naturally high Attack, so super-effective Flying, Psychic or Fairy Pokémon are recommended to quickly get this battle over with. Psychic and Ghost-types, especially with held items, should beware of Knock Off.

Emerge victorious against the Gym Leader and you’ll earn the Surge Badge, or a replica of it anyway. This badge doesn’t actually do anything, so he’ll also give you 10 Soda Pops (and a variety of Poké Beans). If you come back the next day, you can challenge the gym again–and there’s also a new opponent.

If you played Pokémon Sun and Moon, you may recognize Ryuki as one of the Champion Defense challengers. He’ll be standing below Dallas; it’s really hard to miss him with his bright red getup. 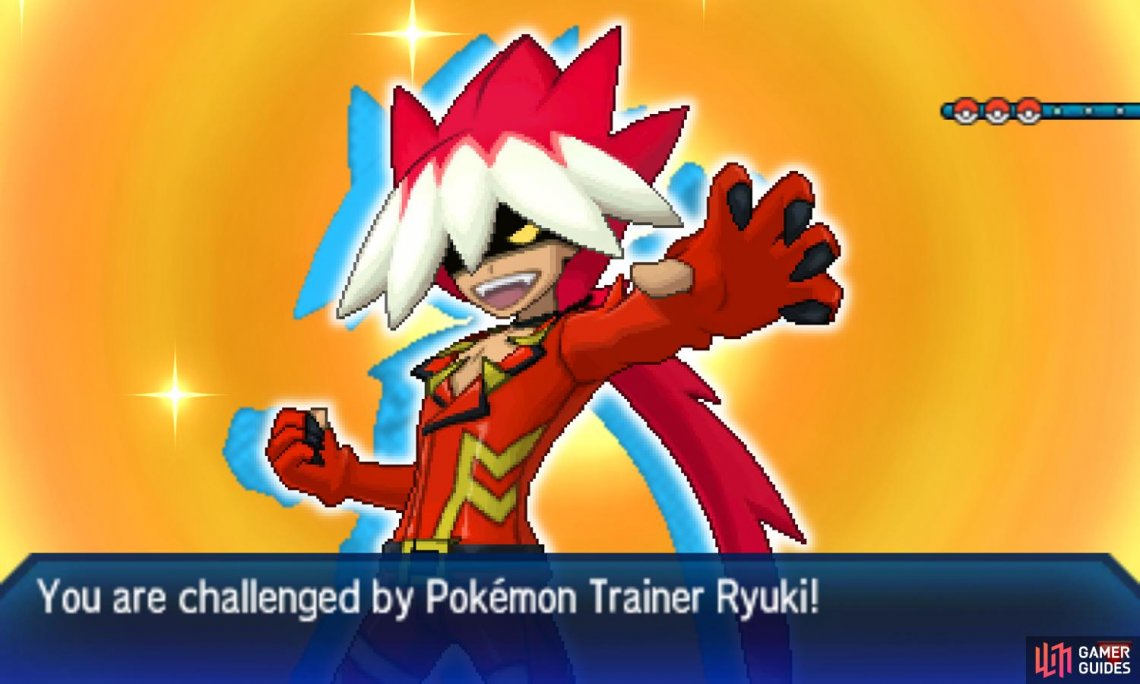 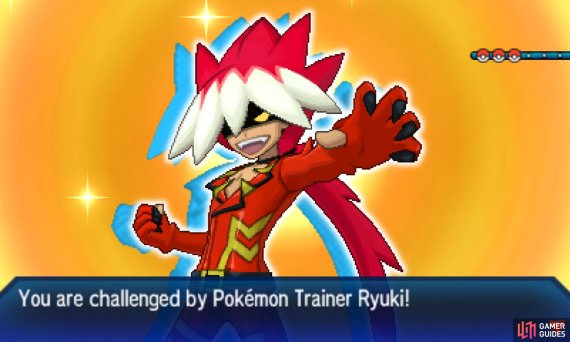 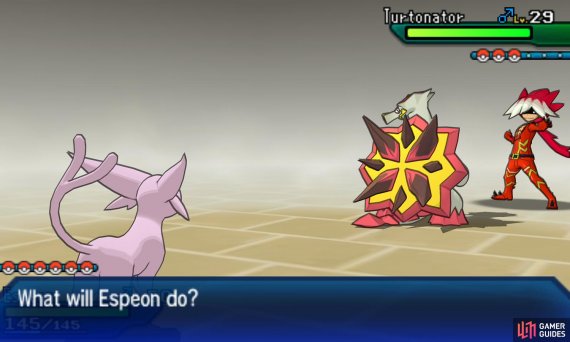 Just like in Sun and Moon, Ryuki loves his dragons. Turtonator is a Fire and Dragon-type found in Ultra Sun. It has moves to boost its Defense and let it survive with 1 HP. Rock, Ground and Dragon-types are ideal and the latter can relax as Turtonator has no Dragon moves.

Drampa is a Normal and Dragon-type that’s exclusive to Ultra Moon. Unlike Turtonator, it has access to a Dragon-type move, Dragonbreath. But it doesn’t have Normal-type moves, not that it really matters. Quash it with Ice, Fighting or Fairy-types. Or Dragons if you must.

Finally, Gabite is an evolved Gible found in the Haina Desert. Ryuki’s Gabite only has Ground and Normal-type moves and not particularly strong ones either. For best results, hit it with Ice-type moves for 4x damage. Fairy and Dragon-type moves will hurt it as well.

Your reward for defeating this Dragon-type master is a Dragon Scale. If you trade Seadra with this item attached, it’ll evolve into the majestic Water and Dragon-type Kingdra.