Rock Carvings are exactly as they sound - mysterious carvings that have been sculpted in the sides of rocks throughout the game's world. There are only ten of these and they are necessary to get to complete the Stranger Mission, Geology for Beginners. In fact, you should head to the location pointed out in that mission to start this sidequest, as the Rock Carvings don't really have a point otherwise. Each Rock Carving is actually contributed a number in the game, as whenever you find one, you will receive a note for your journal that numbers it. So, this list will use those numbers as a reference. Once you find all ten Rock Carvings, refer to the associated Stranger Mission for details on what to do.

The first one is located in the Grizzlies West region (northwest of Valentine), which is cold, so make sure you dress appropriately before heading there. Locate Mount Hagen, which is fairly easy to find and has a path leading up to just under the beginning of "Mount." Make your way to almost the end of this path and you will see the Rock Carving along the way; it's a picture of a blimp at the top of a skyscraper. 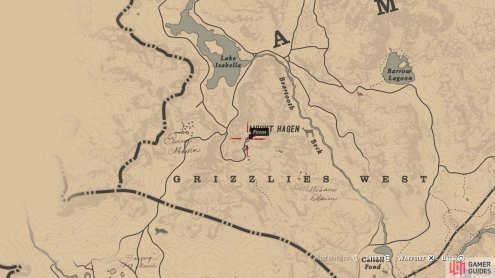 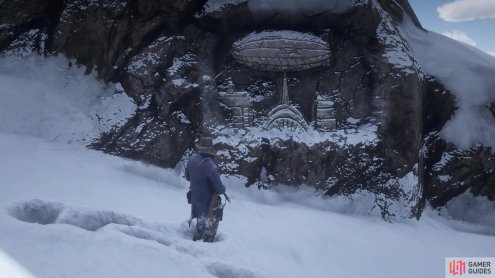 The second carving will be a little more tricky to find, but locate Cumberland Forest on the map, which is northeast of Valentine. North of the "C" is Window Rock across the river, with Whinyard Strait being right next to it. See that road cutting "Whinyard" in half on the map? That road is where you'll want to be, exactly where it cuts the name in half. Find the path that heads downward next to the water on the western side, until you're pretty much at the strait's bank. You should be able to spot the Rock Carving in the side here, north of the bridge, but you'll need to climb a small rock to be able to inspect it. 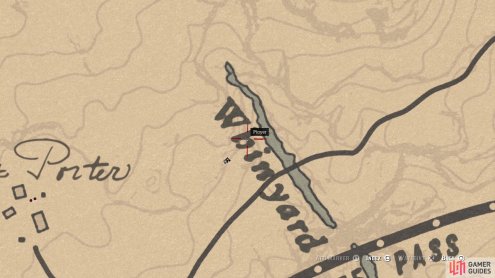 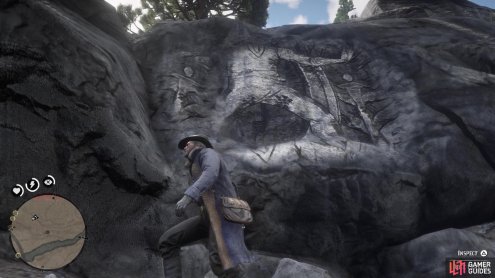 East and a little south of the previous carving is Fort Wallace, an area that is forbidden for you to enter, and northeast of that is Bacchus Station. Look for the hilly area to the east of Fort Wallace and climb to the top. Somewhere up here is a path that heads downward, marked by a tree or two. Once you find it, you will see the Rock Carving at the end, on the lower ledge; it's of a person with some kind of wings.

This can definitely be one of the trickier carvings to find, as locating the path that leads to it can be a bit frustrating. Locate Cumberland Forest on the map and head north of the "C" on the dotted line path. As soon as it starts going west, head along that path and before it dips downward in the actual game, there will be an incline to your south. Follow this to the edge and there will be a spot where you can drop down to a thin ledge. Take this ledge to the end, where you should find the Rock Carving; the carving is that of a nuclear blast and atomic symbol.

West of the town of Strawberry is a lake called Owanjila. On the southwestern shore, just southwest of the "O" in the name on the map, you will find the carving. Stick to the shore and keep an eye on the rocks for the carving. This is probably one of the easier ones to find. 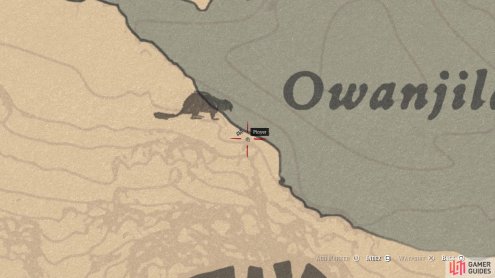 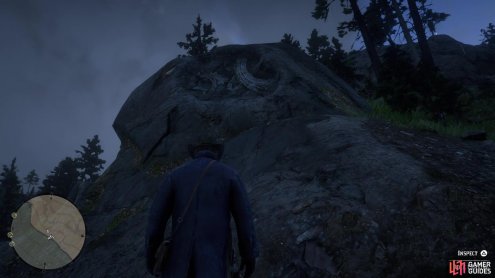 Locate West Elizabeth on the map, which is to the west. There is a dotted path running through the "T" in West, so make your way up to that spot. The dotted path will extend to the right of the "T" and on the first bit just southeast of the "T" is where you will find the carving. 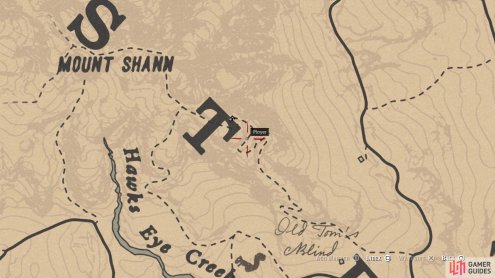 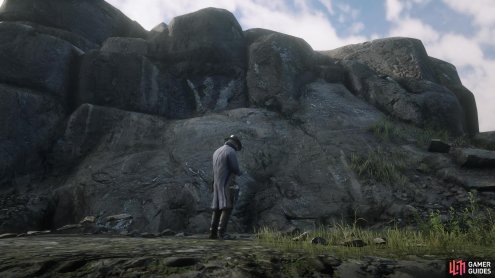 North and a little west of Flatneck Station, which is found south of your camp in Chapter 2, is a burnt down little outpost called Limpany. You'll find this carving south and a tiny bit west of the "L" in that name on the map. Find the two cliffsides here, which will have a small hill in between them. The carving will be on the southern cliff, on the upper part. It's fairly easy to spot, because of the big identation in the side of the cliff. 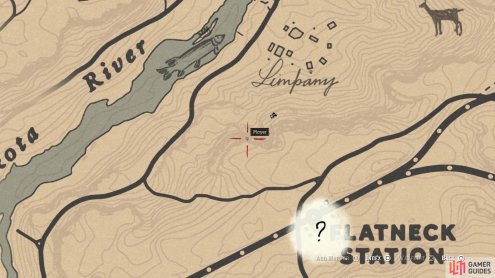 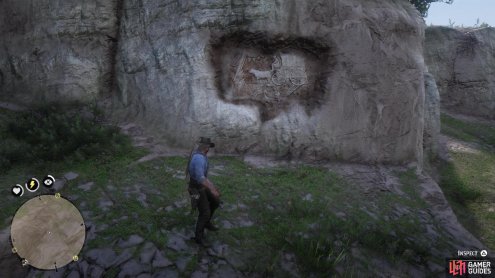 East of Cumberland Forest is a small body of water called Moonstone Pond. Locate the second "on" in Moonstone and head straight south from it. Eventually, you will run into some very large rocks, which is where the Rock Carving will be. It will be of a pyramid, so it should be fairly easy to spot. 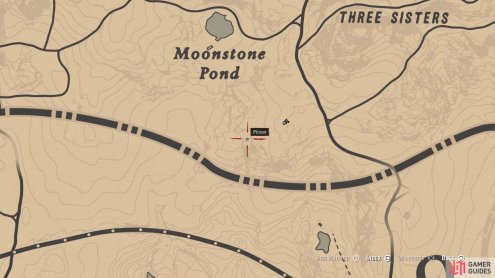 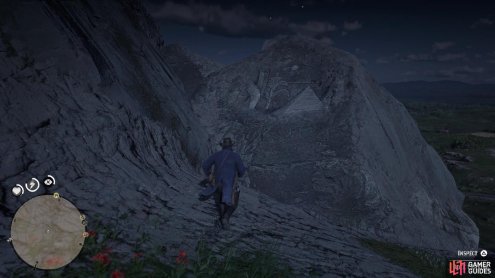 Towards the northeast corner of the map is the town of Annesburg and in vertical lettering is Roanoke Ridge. This carving can be found fairly close to the road in between the "A" and "N" in Roanoke on the map. Still on the road, go a little west of the letters and then south, up the hill a tiny bit. Look on the side of the rocks to your west and the carving will be right there. 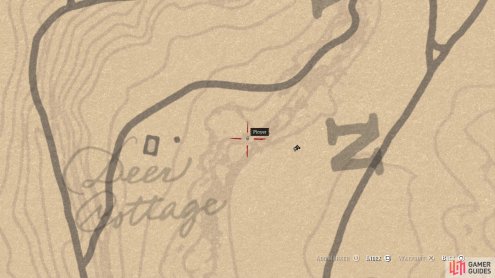 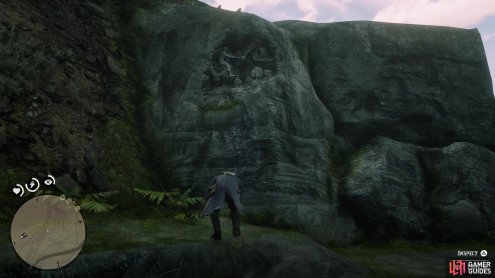 East of the previous carving is a river and if you follow it south, it will run into a small lake called Elysian Pool. There is a road that blocks off the eastern end of this lake, which is actually a bridge in the game. Go to that bridge and follow the road north a tiny bit, while keeping a lookout on the rocky terrain to your east. This carving will be on that rocky section, at the end, right before there is a small hill. Despite its appearance, you can chronicle the location of the Rock Carving from the ground. 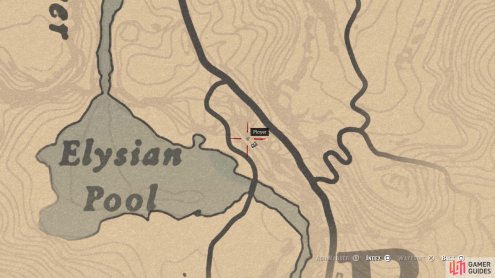 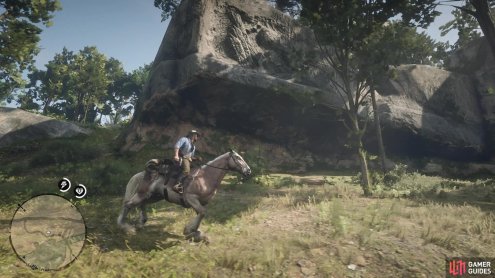