Any time during Chapter 3 and onwards, you can begin this Stranger Mission by finding a broken down wagon near the Pleasance place that’s north of the “O” in Lemoyne. The wagon will be on the north side of the road north of Lonnie’s Shack on the map. The man, dressed up as a woman, introduces himself as an animal wrangler and that all of his animals have escaped. After listing the exotic animals off, you agree to help Margaret with bringing them back to him, starting with the zebra. The general location of the Stranger for this mission

The zebra will be to the northwest, near a place called Larned Sod. This will be north of Dewberry Creek, but you only have a general area available to you on the map, which means you need to pinpoint the exact location of this zebra. It will be an open field, so keep looking around, preferably with your binoculars, until you find the zebra. For a little added fun, feel free to study the zebra to find out its true nature. You will want to approach this animal as if it were a wild horse. Slowly move up to it, then press the Square/X to try and calm it, although it will probably take a few tried to completely calm the creature.

The zebra will run away usually when you get close, so keep to a slow walk. Alternatively, you can also use the lasso to capture the creature, so it won’t run away. Either way, just keep at it until you get a message that the zebra has been calmed and will now follow you. You can either ride it back to Margaret or have it follow you on your horse. Once you bring it back, you will be asked to go after the next escaped animal. 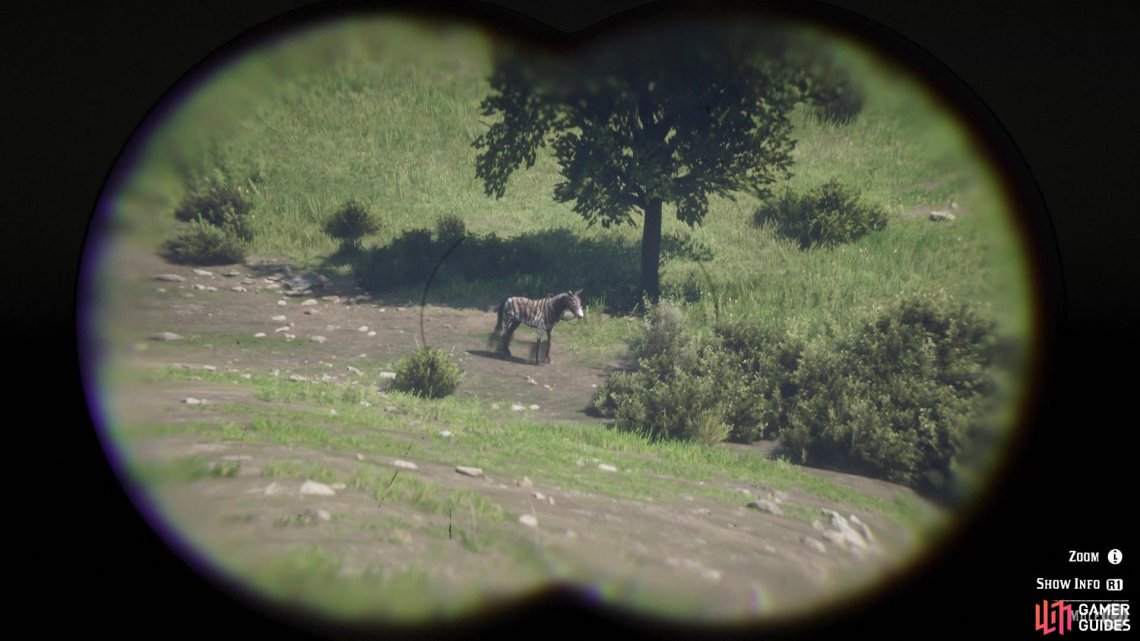 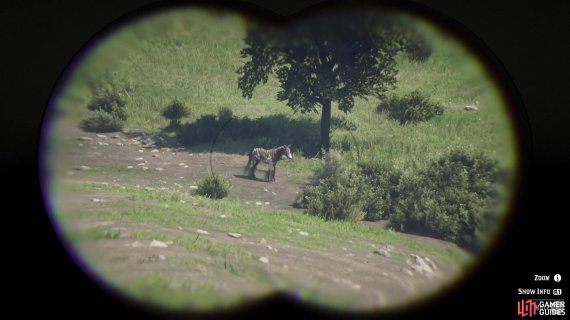 You can see the true nature of the zebra by studying it (left), Lassoing the zebra will help in calming it down (right)

Next up is the tiger, and Margaret’s assistant has brought the lion to help search for it. You will find them to the south, not too far northeast of the town of Rhodes. Make your way to the highlighted part of the map and you will find the assistant on the road. It seems she sent the “lion” out to search for the tiger, but both of them are now lost. She points in the direction of the bushes nearby, so start your search there. Activate your Eagle Eye ability (L3 and R3) when you’re close to the bush to find the trail, leading off to the northeast or so.

Follow the trail as it goes northish, making sure you keep activating Eagle Eye to have the trail stay. Eventually, it will lead you to the “lion,” except it will be dead. This is the handiwork of a cougar, with the assistant mentioning that Stripey, the tiger she’s looking for, is one and the same. Bring the dog back to the wagon, toss it inside, then hide behind the log with Sally. The culprit will eventually arrive and hop in the back of the wagon for a snack. Move up to the wagon and shut the gate, then get on it, as you’ll be driving. Return to Margaret to finish this section and have one more animal to track down.

The last animal you need to fetch is another lion, so head up north to the Emerald Ranch, which is where Margaret last heard it was spotted. Once you get close enough, you will hear some commotion at one of the barns, where some people are holding the door shut. When you get off your horse, make sure you grab a powerful weapon, preferably one with a few shots in its clip. Speak with the person on the outside of the fence to learn that the farmhands got something trapped inside of the barn.

Enter the yard and speak to the one person holding the gate shut, who will open it slightly once you request entrance. Slip inside of the barn and head to the opposite end from where you entered. You’ll hear something and there will be a disturbance outside, with one of the previous farmhands on the ground dead. You now need to hunt down this lion, so head straight north and into the next pen, where you’ll find a dead horse. Inch towards the stable in the back and as you try to enter it, the lion will come out and run towards you. 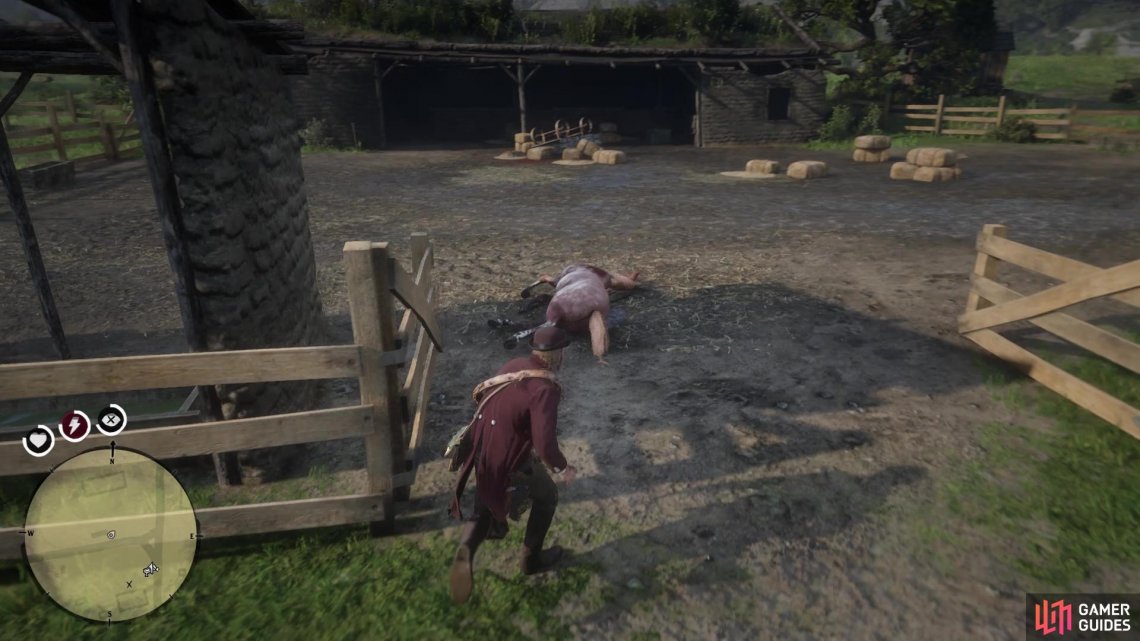 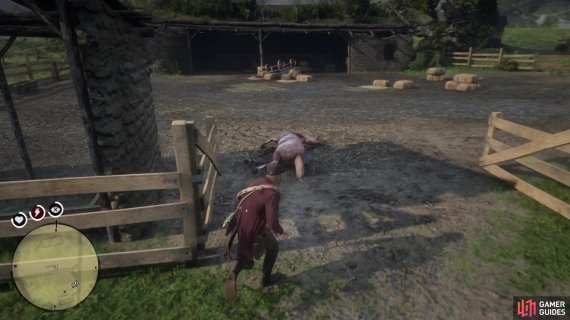 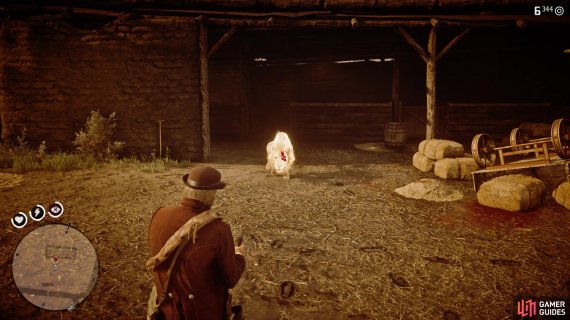 You will find the lion in the stable to the south of the barn (left), Make sure you get as many shots in as possible in the Dead Eye moment (right)

This triggers a Dead Eye moment, so quickly plant as many targets on its head, then pull the trigger. Hopefully, that’s enough to put the actual lion down for good. Once it’s dead, take the trophy when prompted (hold Triangle/Y when near the body) to get the Lion’s Paw. Return to Margaret at the original spot you found him to get your reward, an Emerald

The Lion’s Paw is required to craft the Lion’s Paw Trinket and if you don’t grab it after killing the lion, then you might not be able to get it again. So, pick it up from the lion.