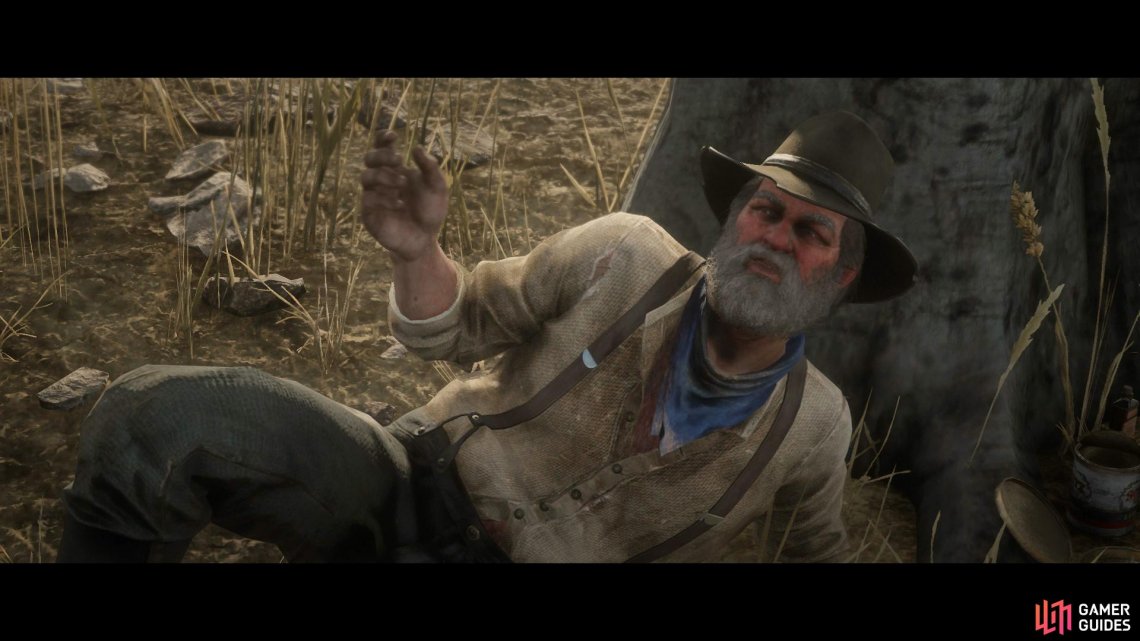 Speak to Uncle up by the tree following the completion of A New Jerusalem to come up with an idea on what to use the ranch for. Ride with Uncle back to Blackwater and head to the lumberyard to purchase the necessary materials.

Following then next cutscene, you’ll be assisting Sadie with another Bounty, follow the marker up to Painted Sky and dismount from your horse. Head into the barn and you’ll be ambushed by Cortez, break free from his grapple and then knock him down in the brawl, it only takes a few punches to put Cortez on his backside. With Cortez now bound and stored on the back of Sadie’s horse, follow her back to Rhodes.

Take Cortez into the Sheriff’s office and Sadie and John will wait until the Sheriff returns. Cortez’s men however have other plans and attack from outside. Quickly head out the front and use Dead Eye to take out as many as you can, this will cause the men to begin fleeing from Rhodes. This is the perfect opportunity to give chase and score the four hip fire kills you need, preferably with a shotgun if possible. It seems however, that the attack was just a diversion as more of Cortez’s men blow a hole in the cell to break him free. 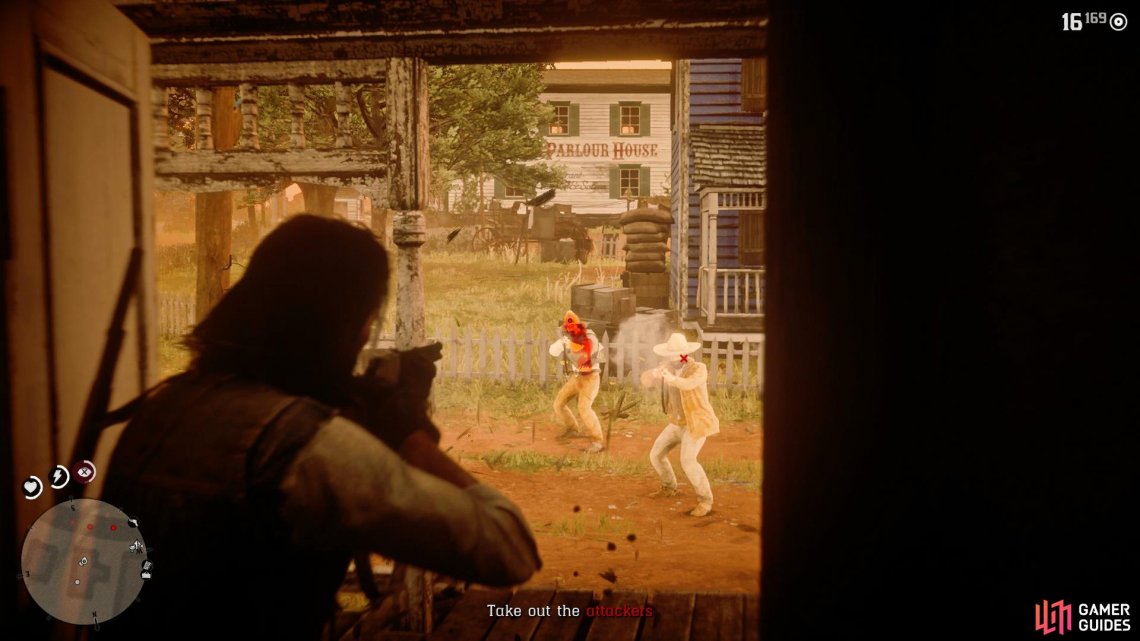 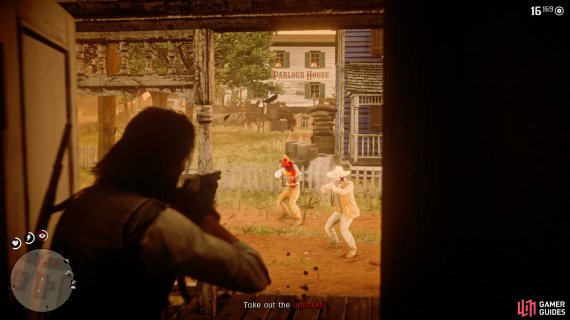 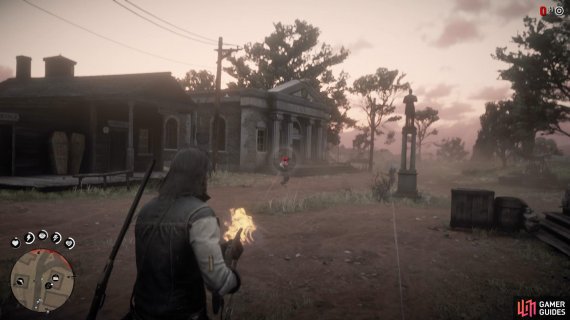 Use Dead Eye at the start of the shootout to force the men to flee (left), this is the best time to score the hip fire kills. (right)

Sadie suggests heading to Dewberry Creek, the area that Cortez mentioned enroute to Rhodes. Follow the marker and Sadie will suggest getting a vantage point where John can assist with a scoped rifle. There are many of Cortez’s men to deal with here but you need to ensure you score at least five headshots so make use of Dead Eye to give yourself more time to line a shot up. 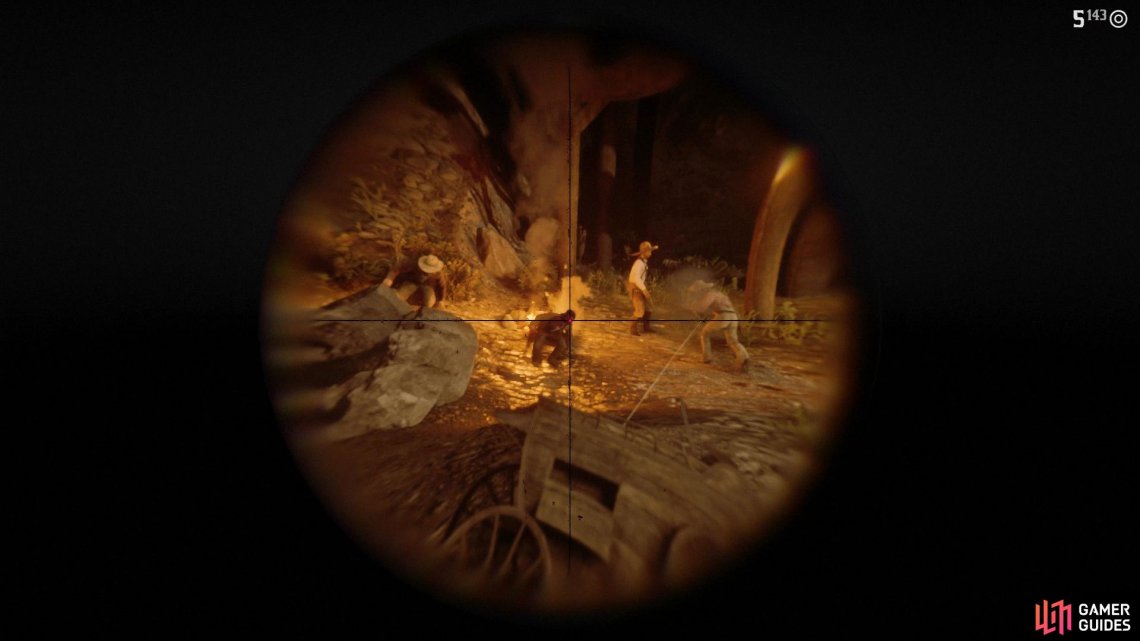 Use Dead Eye to help you line up headshots.

Once you clear out the initial wave of enemies, jump down from your vantage point and head over to Sadie to press the men back further. Switch to a shotgun or rifle here and if you’ve yet to kill four men with hip fire, now is your chance to attempt it again. Keep to cover here as you can easily be overwhelmed by all the enemies here and once you get to the river bank with all the men dead, take aim with your rifle and put a few bullets near Cortez’s boat to scare him back to shore. You’ll have to deal with one final wave of enemies here, take cover by the nearby rock and dispatch them before returning to your horse and back to Rhodes to drop Cortez off for good.