South of your camp in Chapter 2 is Flatneck Station and you will want to head west of there, keeping to the northern cliff’s edge, until you finally spot the familiar white circle that indicates a Stranger Mission. Approach the man, who is only known as Treasure Hunter at first, will properly introduce himself as the self-proclaimed renowned explorer, Maximo Cristobal Valdespino. Seeing as he’s planning on leaving shortly, he offers to sell you the treasure map he has for the low price of $10. Should you decline this offer, then he cuts the price in half, so go ahead and buy the map either way.

If, for some reason, you scare Maximo or kill him, you are able to purchase his map from any Fence in the game’s world.

You can look at the map from your satchel, but unless you know the layout of the land very well, it’s going to be quite difficult to pinpoint the clue of the treasure on your own. Open your world map and look north and a little west of Horseshoe Overlook for Caliban’s Seat. Place a custom waypoint in the middle of the name for now and make your way there. Approach the name on the map from the eastern side, where you should be able to find a path that leads atop the plateau here (east of the “T” in Seat). 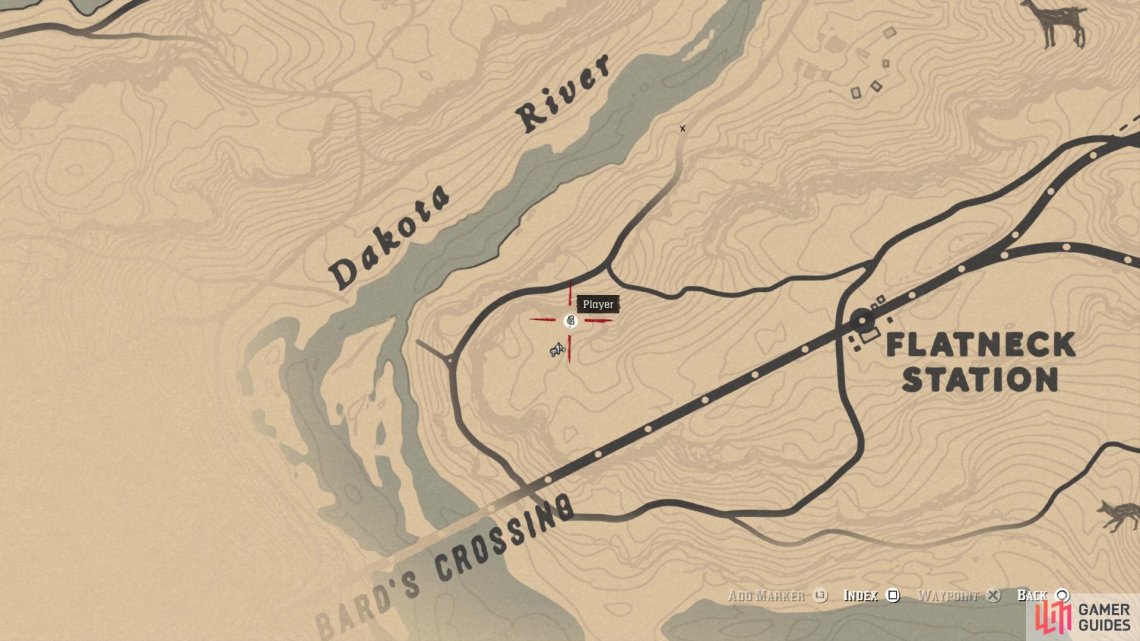 This is where things can be a little confusing, as the thing you’re looking for is on a thin ledge. For now, just follow the path up to the top of the plateau and keep going in that direction until you spy a worn tent to your right. Just before that tent is a trail leading down to a ledge. Run along this ledge, as you want to clear a small gap in it, leading to a small wall ahead of you. Climb up this small wall, then drop down to a second ledge on the other side. Follow this ledge towards the end until you get a button prompt to search. Do that to get the second treasure map.

The second map will lead you to a place called Cotorra Springs, quite a bit north of Valentine, in the state of Ambarino. You might not have this area uncovered quite yet on your map, but if you’ve done the first part of The Noblest of Men, and a Woman already, you should see Barrow Lagoon on your map to the northwest of Valentine. If you follow Dakota River, to the west of Valentine, to the north, you should uncover a spot called Window Rock on your map. Cotorra Springs will be northeast of that locale.

Cotorra Springs is a fairly open area, with geysers and a bunch of cairns placed around it. While the geysers might make for a nice sightseeing attraction, the cairns are what you’re looking for right now. Most of them start out big at the bottom and have small rocks at the top. The one you need has a larger rock at its top, so keep looking for it until you find it (just to the right of the second “O” in Cotorra). Once you do, approach that cairn and you’ll receive another prompt to search, netting you another map. 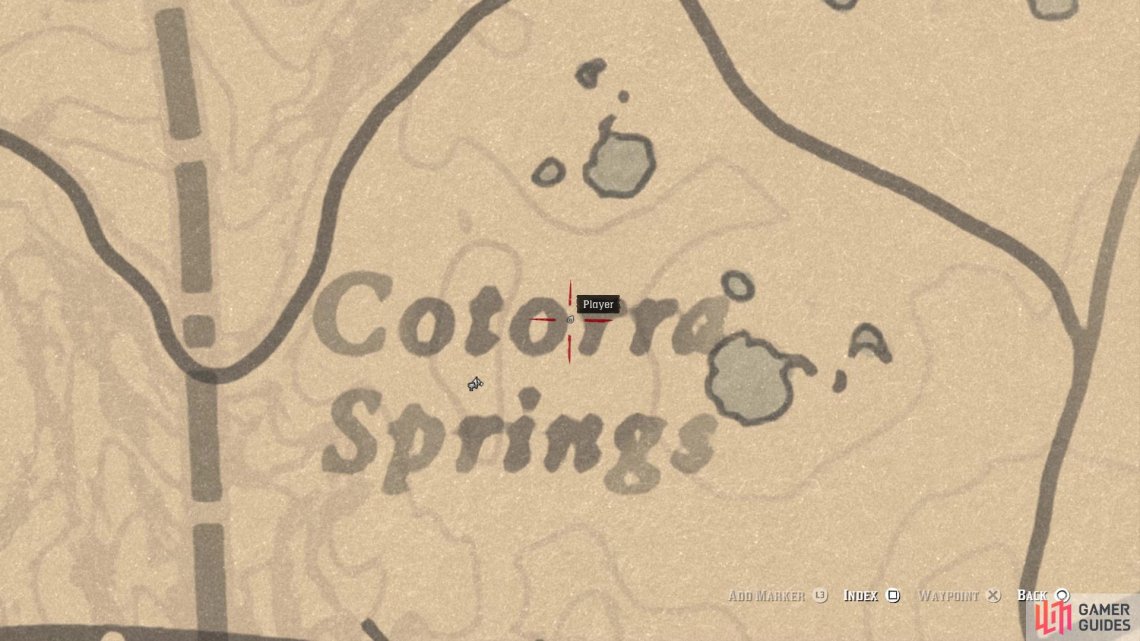 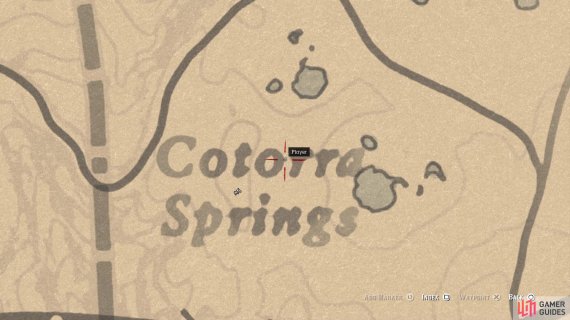 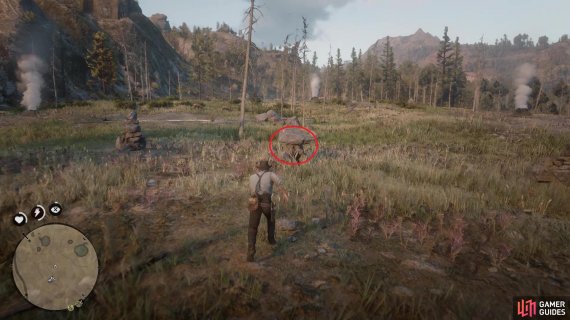 You can find the next clue to the right of the second O in Cotorra (left), Look for the cairn with a large rock on top (right)

This is the final map and you will be taken to the Grizzlies East region, to the east of Cotorra Springs. In particular, you’re looking for a lake called O’Creagh’s Run, which is fairly large and to the right of the “East” of Grizzlies East. In the middle of this large lake is a small island, which will be your target, but swimming will constantly use your stamina, so you’ll need to be careful. There is a little peninsula of sorts on the western shore of the lake, which will make getting to the island a lot easier and not start dipping into your stamina core.

Once you make land on the small island, look for the small patch of greenery on the southern end. It’s not in the large bush, but more in the grassy area. Keep moving around until you get that lovely button prompt to search a rock. Go ahead and do that to finally get your reward, which is two Gold Bars. These are worth $500 each, so that’s some nice money. Remember that gold bars need to be sold to a Fence, as regular stores will not take them. 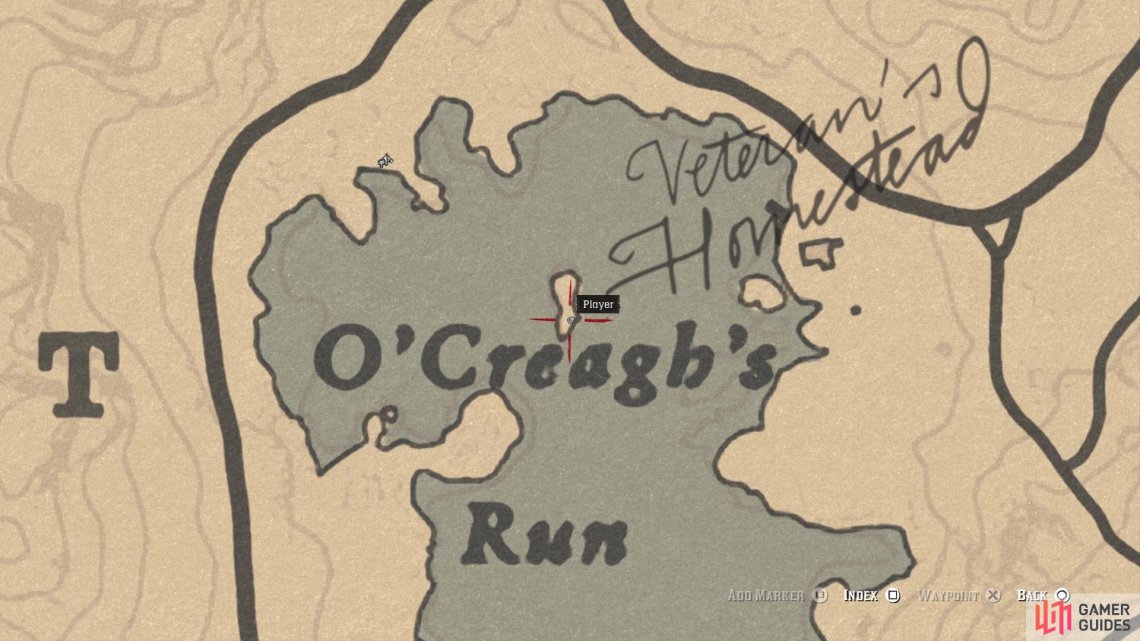