You can begin this Stranger Mission anytime from Chapter 2 onwards, but it doesn’t begin by speaking with someone. Instead, you need to find three maps that are hidden across the world. These maps are located near desecrated corpses, so if you can manage to spot them, then you will easily find the maps. You can get the map pieces in any order, but some are further away than the others, so it might be better to get those first.

If you have any trouble finding any of the bodies/maps, then the game will pinpoint an “X” on your map when you get close enough. This signifies a dead body, which is the same thing that appears upon killing a human enemy.

The first map piece that will be listed is south of Rhodes, which is in the southeast portion of the map (Lemoyne). See the vertical lettering for Scarlett Meadows? Make your way down south to the “S” in Meadows, as that will be the location of the dead body. This one is easier to spot at night, as there is a lantern at the base of the tree the body from which it is hung. Once you locate the tree with the body, go to the backside of it to find the head on a pike, which will have the piece of map. 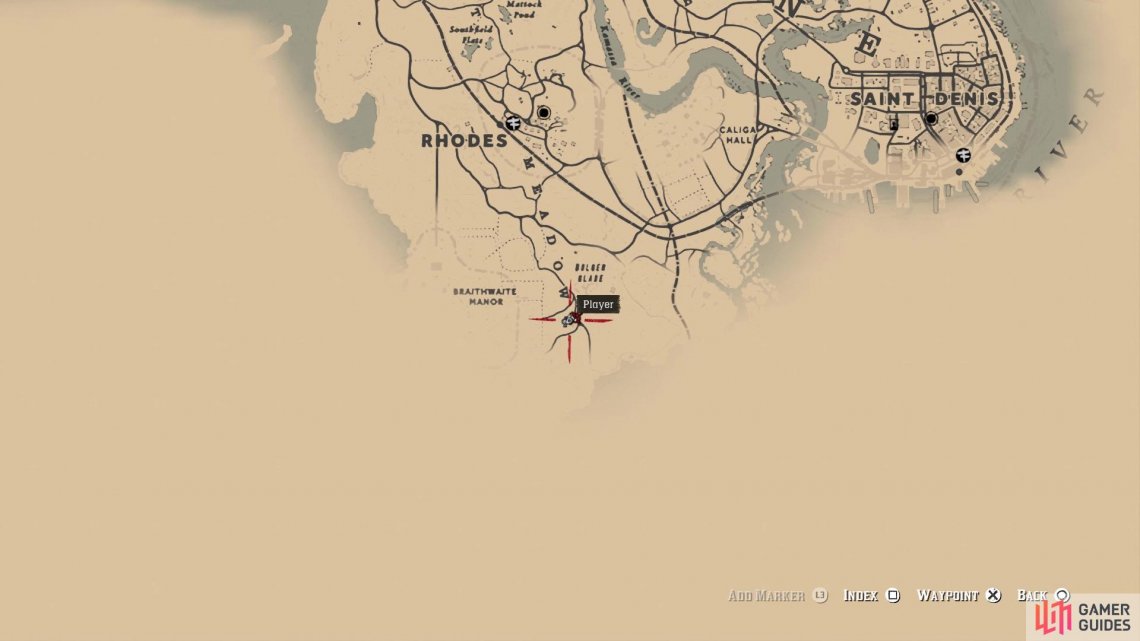 (1 of 6) The location of the first map piece

The second map piece will be located to the south of Wallace Station, south of the river there. Look at your map and find where Dakota River is marked on it. Follow the small river (Little Creek River) as it heads out from Dakota River westward. When you to the railroad track intersecting it, follow those tracks south to the intersection with a normal road. At that intersection, head straight northeast until you spot some large rocks and see the game put an “X” on your map. The body will be on the larger rock, while the head with the map will be on the smaller one.

The third map piece can be found a little bit south of Valentine and is actually not too far from it. Follow the railroad tracks out of Valentine, heading south, and you’ll spot a gap in the land that the tracks go over (basically a very small bridge). This is where you want to go, as the dead body will be hanging underneath this gap. The head will be on one of the support beams to the side, so grab the map from it.

You’ve acquired the three pieces of the map, which will help pinpoint the location of the killer who did these horrific acts, but actually knowing where that location is a bit of an enigma. Looking at your map, glance to the west of Valentine (and a little south) to see a small square on the northern side of the road. You know you’re close when you see the large white circle appear on your map.

It’s not really a cabin, as the place is nothing but the floor and like a piece of one of its walls. However, you should see some doors on the outside that lead down to a basement. With the clues in hand, your character will open the lock on it automatically, letting you inside. There are two letters you can read on the table not far in, but the main event is in the back room. Note that you have a lantern in the same slot as your knife, so feel free to use it in here, as it’s really dark otherwise.

Once you leave the basement of this house, you will not be able to come back later, so look around as much as you want while in here.

To continue the mission, inspect the knife in the back room, only to get knocked out by the killer. It looks like things are looking kind of bad here, but pay attention to the bottom of the screen. As the killer looks down on you, a button prompt will eventually appear in the bottom right to throw a head at the guy. Do this, then punch him to knock him out. Hogtie the stranger after that, carrying him outside and putting him on your horse. Bring the killer to the sheriff’s office in Valentine and place him on the floor when prompted. 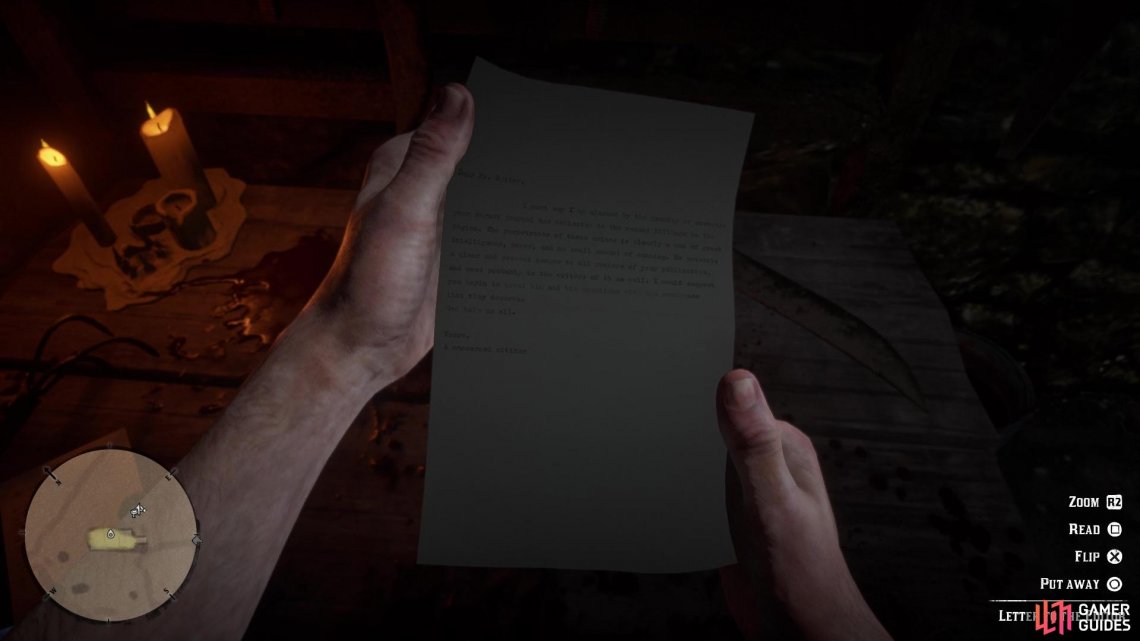 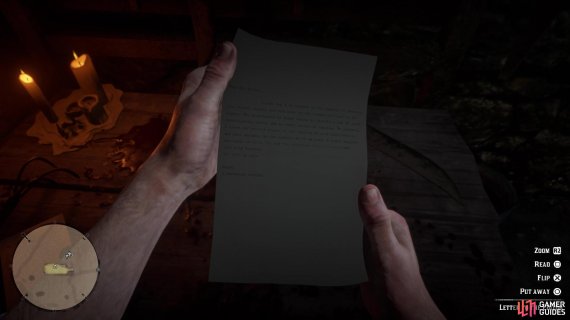 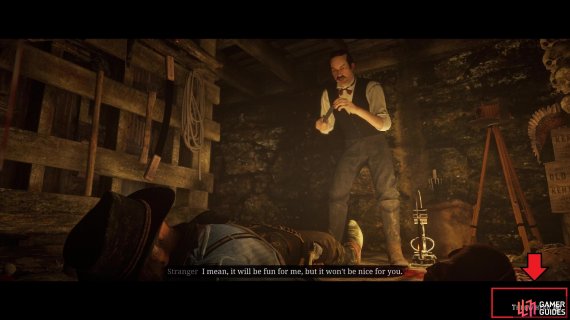 There are some letters on the desk you can read (left), Look for the prompt to throw the head in the bottom right corner (right)

While the sheriff is placing the man in the jail cell, he will break free and begin attacking him. If you wish to get your reward, shoot the deranged man, either normally or with Dead Eye active. For saving the sheriff, he will hand over $20, your reward. However, if you take too long, the sheriff will kill the man himself and you won’t get a reward.