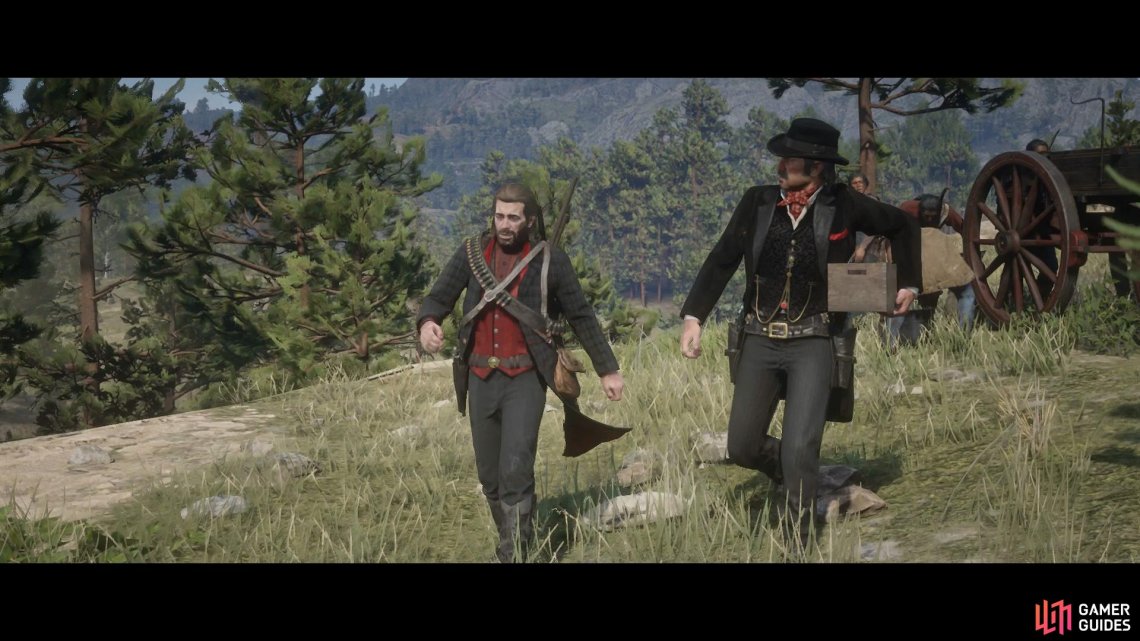 Head to the Cumberland Forest to meet up with Dutch and Eagle Flies once more to begin the mission. You’ll need to be an expert at hitting headshots in order to obtain the Gold Medal here however there is an opportunity at the end of the mission to score some easy ones. Follow Dutch down to the path and help him set up the dynamite on the trees by picking up the spool and running the wire to all of the trees. Once you place the last one, dash back up to the top of the ridge and wait near the plunger, detonating it as the army approach it.

The shootout begins here and you’ll want to use a rifle to begin hitting headshots. Keep an eye to the left and stop any soldiers from making their way up the hill to your position. If they do, take aim at the left and headshot them before they can get any closer. You’ll want to hit as many headshots as possible to save yourself some trouble at the end of the mission. 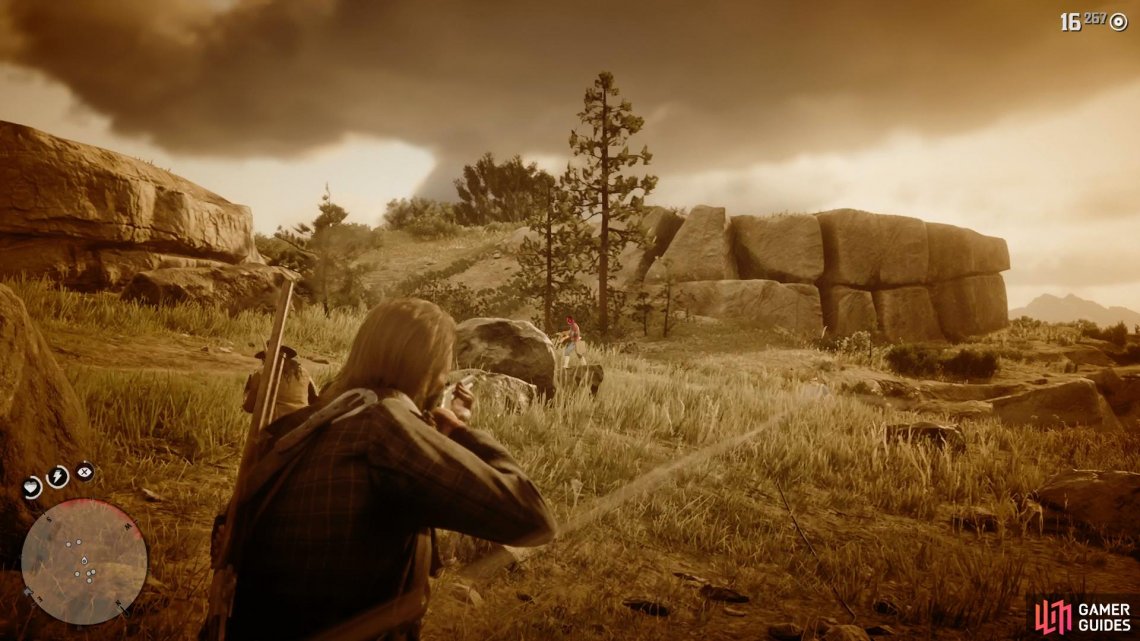 Keep an eye to your left as soldiers make their way up the hill.

Once this wave of soldiers are down, head down to the marked area and loot three bodies. After you loot the third, more army soldiers will arrive with a cannon in tow and you’ll have to defend yourselves against it. Quickly take cover and begin taking out the nearest soldiers to your location with headshots. Once the initial few are down, make your way around to the left side of the hill as you reach the cannon and take out the soldier using it. You only have 45 seconds to do this in so don’t get too held up trying to pick the soldiers off. 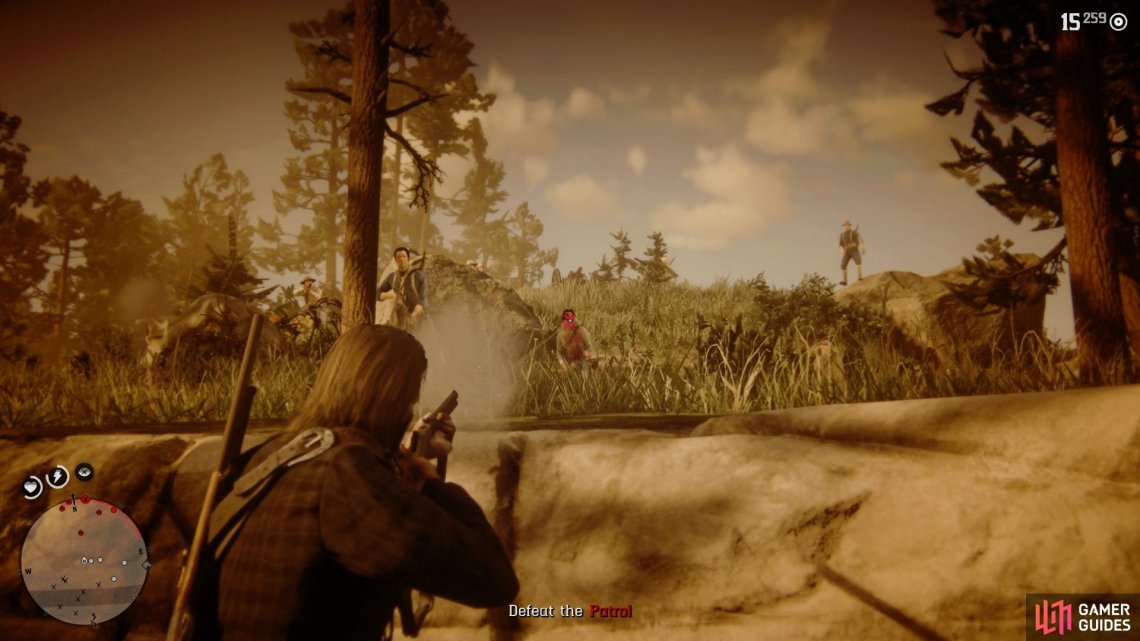 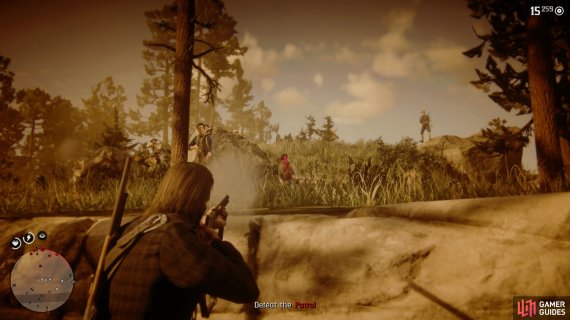 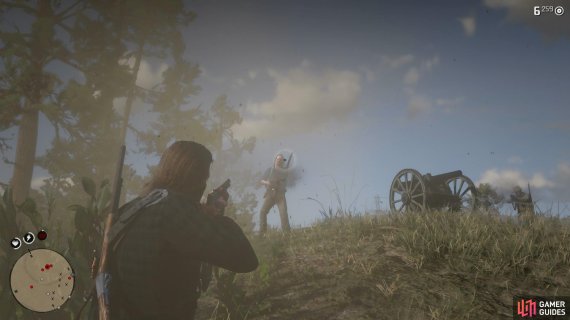 Use Dead Eye and take out the nearby soldiers only (left), then make a dash up the left side of the hill to reach the man on the cannon. (right)

Once you clear this wave of soldiers, the army will send another platoon, at this point Dutch decides to make a run for it. Mount up and follow him, taking this short lull in action to reload and use some Snake Oil. As you reach the path, you’ll need to leave the horses behind, be sure to take a rilfe and shotgun with you and then follow Dutch down the path.

More soldiers will assault you in the cliffs here, follow Dutch’s lead and take cover as you go for more headshots. Eventually you’ll reach the last path running down to the edge of the cliff where you’ll begin being swarmed by soldiers. Take a few steps back but don’t go all the way down, the soldiers here will keep respawning until you reach the cliff edge. If you’re not confident you have the 35 headshots yet then take the time to stay here get the remaining ones. Once Dutch shouts to you, you’ll be able to approach the cliff edge and initiate the next cutscene. Dutch and Arthur have no choice but to surrender, press the [Triangle]/[Y] button and then begin backing up towards the cliff, once you get the chance, leap off the side. As you make your way down the rapids, swim to the left to grab Dutch’s hand and complete the mission. 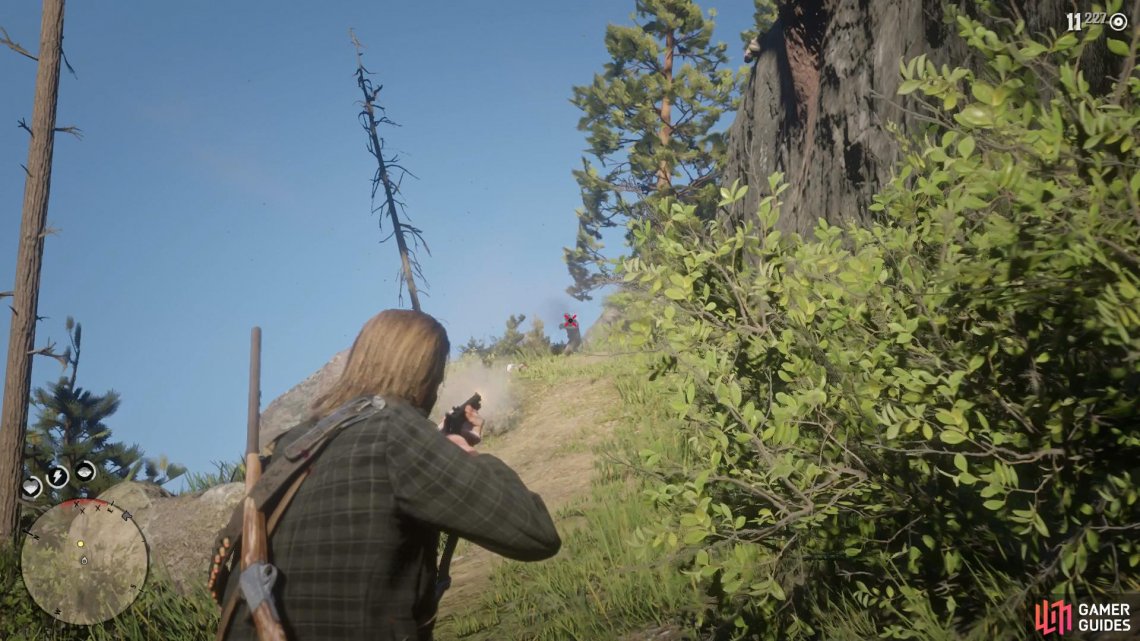 Stay on this spot at the end of the mission to get as many headshots as you need.