The town of Strawberry is located to the west of Flatneck Station, in the West Elizabeth area of the map. Look to the north of the “Z” in Elizabeth, south of the river there. You can begin this Stranger Mission as soon as you freely gain access to the map in Chapter 2, and it can be fully completed right away, too. You will find the Stranger in the woods, looking through his camera. Albert Mason, a photographer, has decided to move on from taking pictures of people and wants to pursue his newly found dream of capturing animals on film. 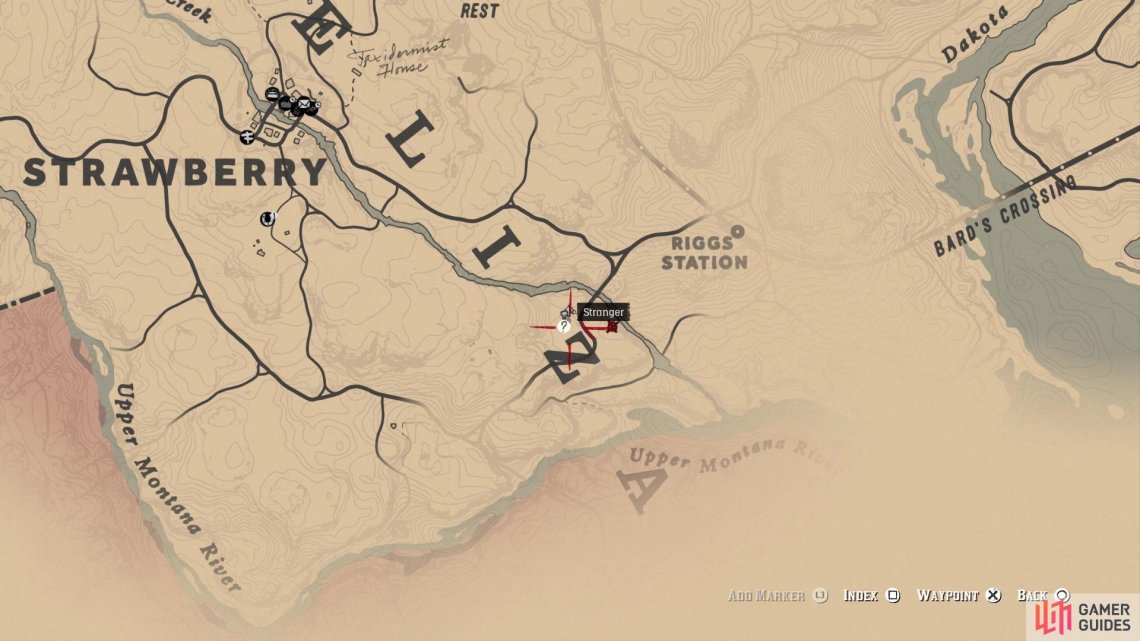 (1 of 2) The location of the Stranger for this mission 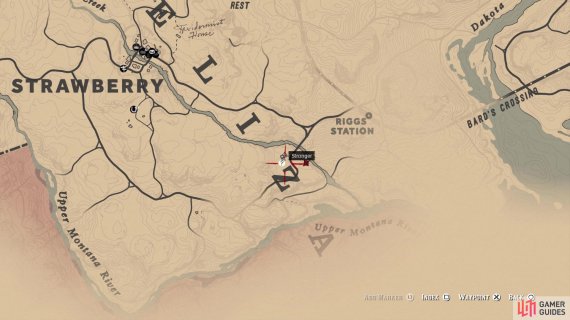 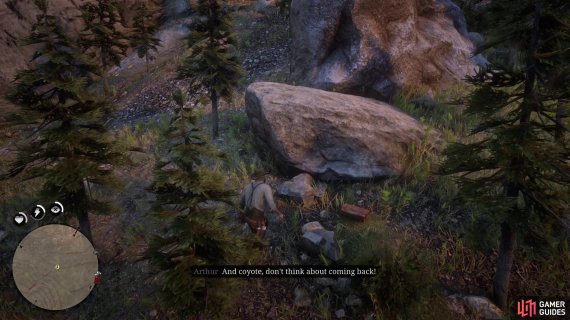 The location of the Stranger for this mission (left), The coyote will drop the bag by a large rock (right)

However, while speaking with you, things go a little south, as a coyote sneakily comes by and snatches Albert’s bag. As soon as you gain control, head west into the highlighted area to search for the coyote. It’ll be at the top of the hill and it will run off as soon as it sees you again, so continue the chase. Eventually, once it runs around for a bit, it will drop the bag near a rock and some small trees. Pick it up and return to Albert to finish the first part of the mission.

Before the next part of this mission appears, you will need to wait two whole in-game days. The best thing to do is return to your camp and sleep in your bed two times, picking the longest option. If the next part of the mission doesn’t appear on your map (and it should), then run around or find another place to sleep.

Albert Mason has returned, with him being in a different location this time. Find the river north of Strawberry, the Little Creek River, then look to the east of that for the Wallace Station. As you follow the road to the north of the river west of the station, you should spot a branching path to the north; Albert will be slightly east of that branching path. Presumably learning his lesson from the last encounter, Albert hangs the meat from the tree this time, with the subject being wolves.

The wolves you’re about to encounter in this mission are Gray Wolves, so make sure you study them to have an entry in your Compendium. 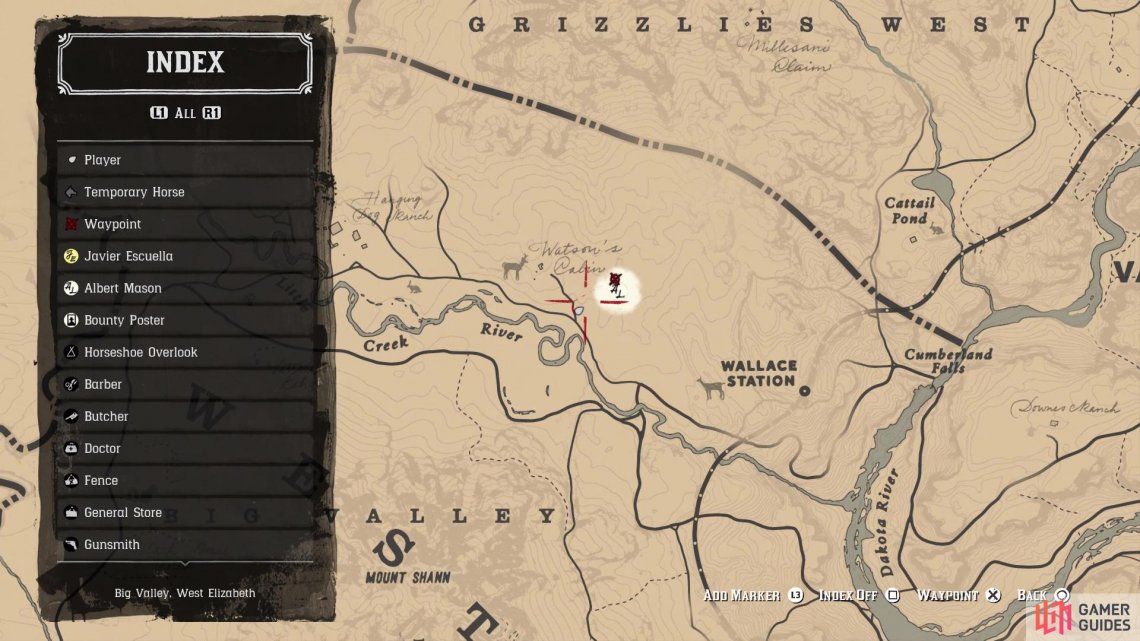 (1 of 2) The location of Albert for the second part 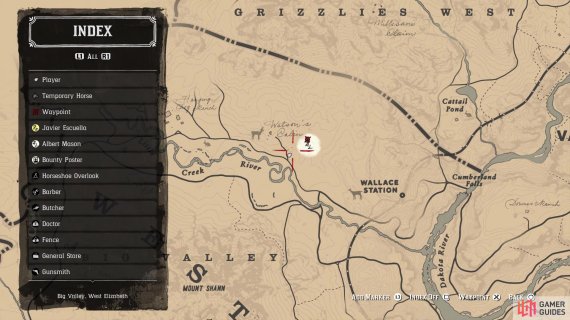 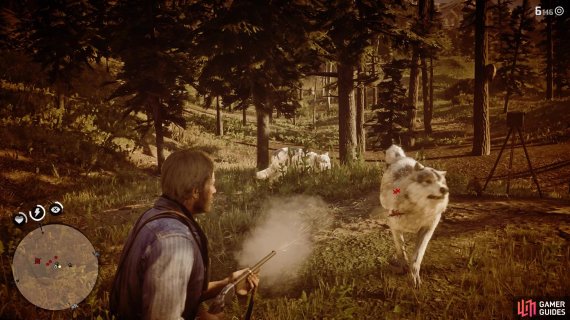 The location of Albert for the second part (left), Using Dead Eye can help take out a few of the wolves (right)

Thinking of the worst, Arthur decides to stay and protect Albert, in case anything goes wrong. As you’re waiting, two wolves will come in and be entranced by the hanging meat. However, whenever Albert takes a picture, the flash will make the wolves turn their attention towards Albert. This is your cue to step in to protect Albert now, so open fire on the wolves. However, you don’t only have these two, as three more will decide to rear their ugly mugs to join in the festivities, so you’ll have to deal with five wolves in total. One of the easier things to do is use Dead Eye to take out as many as possible.

While it would be nice to get clean shots with a bow on their heads, surviving is the number one priority, especially with five wolves. If you’re in need of health, quickly access your items and drink/eat something to replenish it. Hopefully, Dead Eye will allow you to clear out two or three wolves, which will make the remaining ones easier to kill. Upon killing all five wolves, Albert will be eternally thankful and the second part of this mission will be over. Make sure you skin the wolves for pelts and other goodies!

Once again, Albert has moved to take up a new position, this time being north of Emerald Ranch. This is east of Valentine on the map, and Albert will be by the water just north of the ranch. After the previous encounter with the wolves, Albert has decided on horses for his next picture. The only problem is that the horses won’t come anywhere near him, so he asks for your help in driving them in his direction. As soon as you regain control, get on your horse (or Albert’s horse if you don’t have one) and begin riding over to the marker on your map.

When you finally arrive, get on the western side of the horses and hold the L2/LT button to focus on the horses. You have five of them there and as already said, you’ll need to guide them back in the direction of Albert. This isn’t really that difficult, as long as you keep behind the horses and don’t go too fast. Pressing Circle/B will have Arthur shout, making the horses go a little faster. You can also fire your gun up in the air, but that isn’t really necessary. Try to maintain a constant speed behind the animals, remembering that some move slower than the others, so match their speed to avoid trampling them. Once you get close enough, you’ll see Mason take their picture. You’ll be rewarded with a picture of the wolves encounter, which will finish this portion of the overall mission. 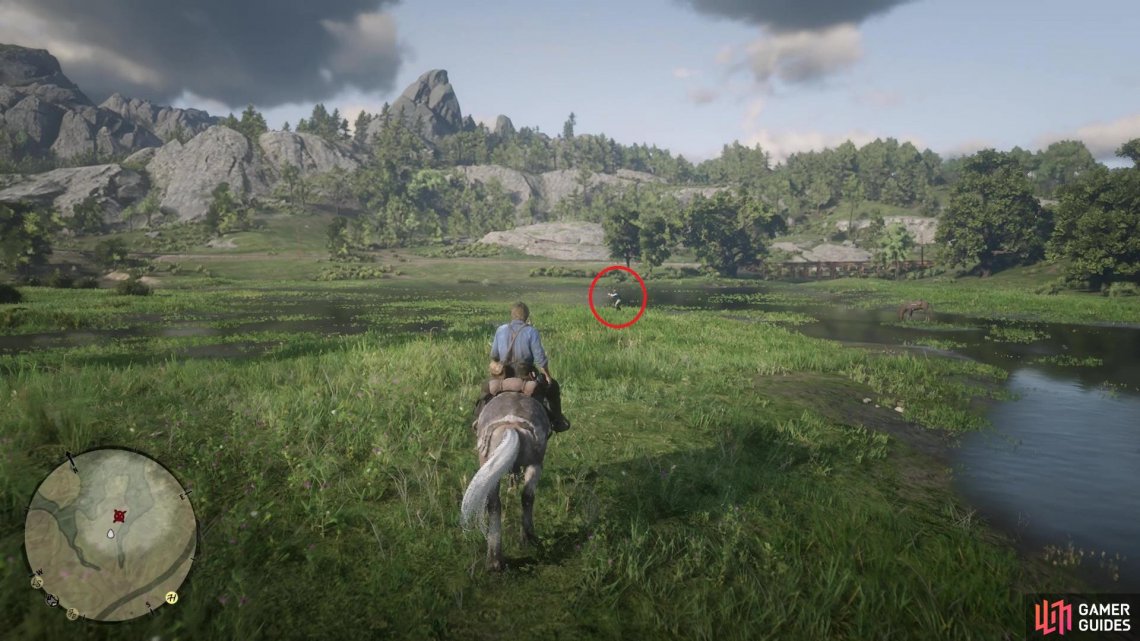 (1 of 2) Mason can be found north of Emerald Ranch, by the water 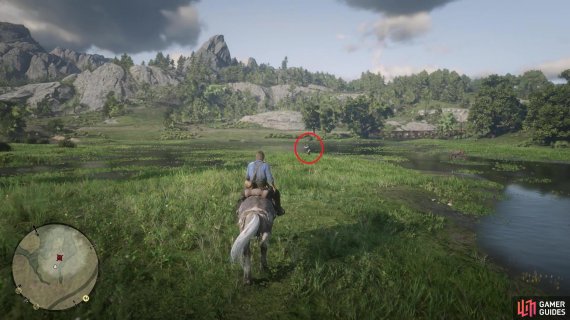 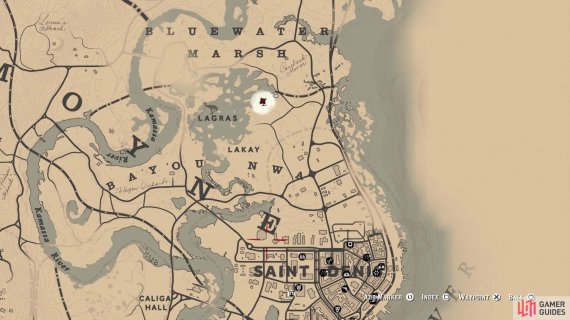 Mason can be found north of Emerald Ranch, by the water (left), The location for Albert Mason’s fourth encounter (right)

North of Saint Denis, which is in the southeastern corner of the map, is an area on your map called Lakay/Lagras. This is just above the Bayou NWA name on the map, and you’ll find Albert on the eastern side of the swamp/water here. Thinking he learned his lesson after moving to horses in the previous mission, Mason went back to the dangerous wildlife, as he is now attempting to photograph some alligators. Thinking that he’ll be much safer inside of the boat, Arthur decides going out into the water is easier.

If you’ve never controlled a boat before, the left analog stick controls it, while the X/A button will use the oars. Pressing X in time with the oar entering the water to row more quickly. There will be three markers on your map, which means three spots to catch some alligators. The one to the north is the closest, so head there first. There are some boars on the shore, prompting Mason to get his spirits high that an alligator is close by. Slow your movement (R1/RB) and wait until an alligator snatches a boar, then hopefully you’re lined up to have Mason take a picture.

You have a choice of going southwest now or due west, but southwest will be listed first. The one in that direction will be swimming in the waters, so you’ll have to line Mason up for a good shot. Without pressing X/B, you can just move the left stick in the direction to turn. Once Mason snaps the photo, move to the last location in the west. This one will be on the coast, but will head inland when you get close. Mason suggests going on land to lure the beast over to the boat. Before doing that, though, rotate the boat to face it west.

When you’ve done that, exit the boat and get to land, slowly approaching the marker on your map. Upon getting close enough, the alligator will turn around and start coming in your direction. Once it does this, quickly run back to the boat and get back inside of it. Mason will snap the picture while you’re getting in the boat, but the alligator will be finished chasing you. Turn around and stroke your way back to where you first met Mason here to finish this part of the mission. 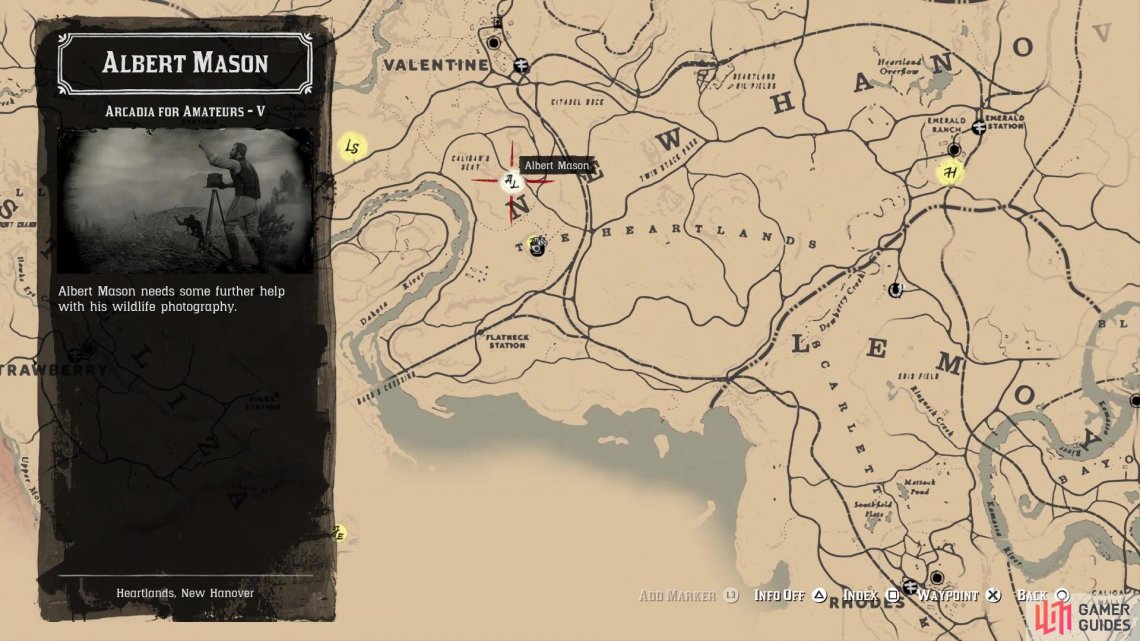 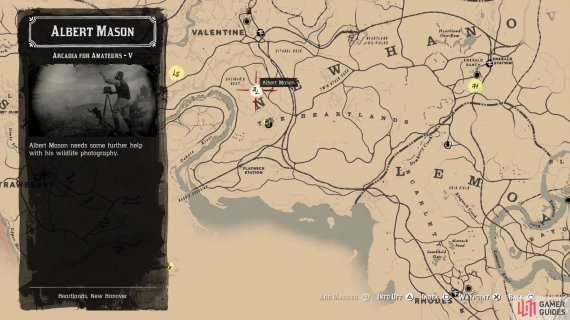 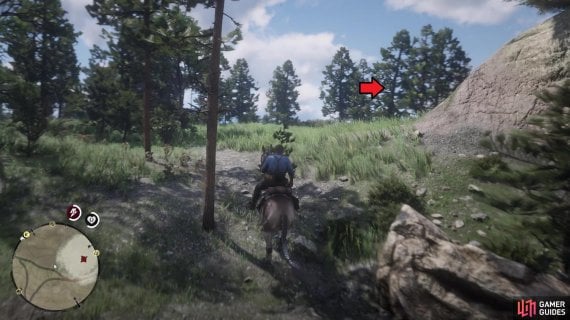 The last encounter with Albert is not too far north from your Chapter 2 camp (left), Head up the hill pictured to find him (right)

The last part with Albert Mason is a very easy one, as you don’t really even need to do anything. He will be found southeast of Caliban’s Seat, just above the “N” in New Hanover on the map. He’s on top of a hill, trying to capture some shots of eagles. As Arthur warns him of the ledge, he jokes around and ends up falling. You don’t have to do anything to pick him up, as Arthur does it automatically. After some more talking, Mason will go off on his own, finally finishing this mission strand.