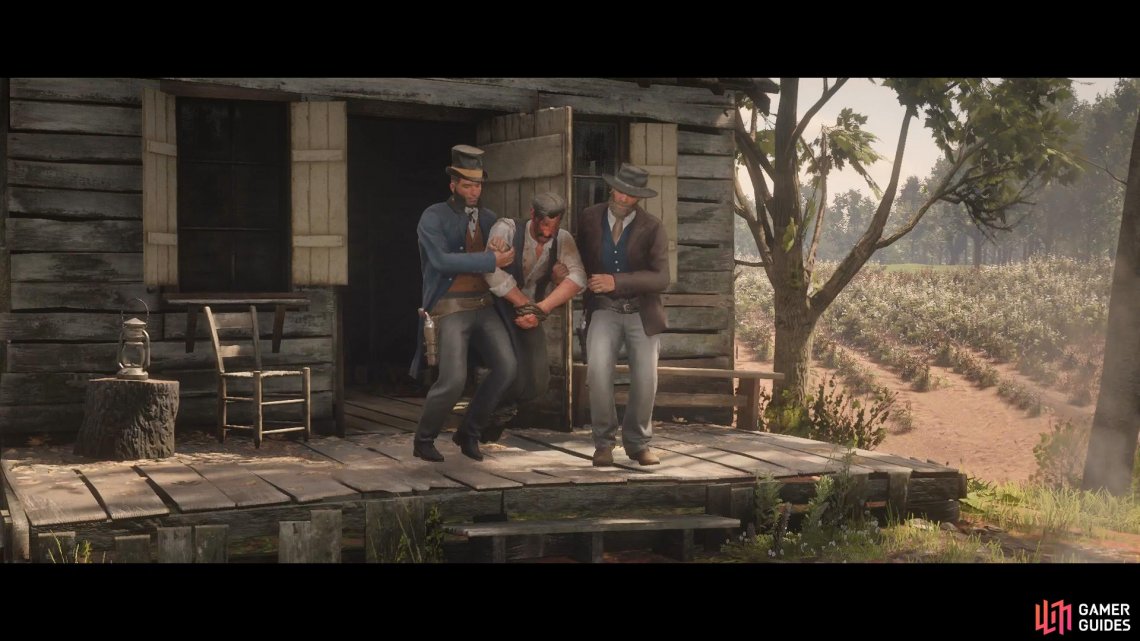 Speak to Dutch in camp following the completion of Advertising, the New American Art to learn about Trelawny’s situation. Speak to Charles and mount up, following the marker to Trelawny’s Caravan just outside of Rhodes. You’ll need to search around for some clues as to his whereabouts and you’ll need to find all three clues for the Gold Medal. The first is the food on the table, the second is the state of the bed and the final clue is the bloody towel in his bathtub (use Eagle Eye to help you spot these). 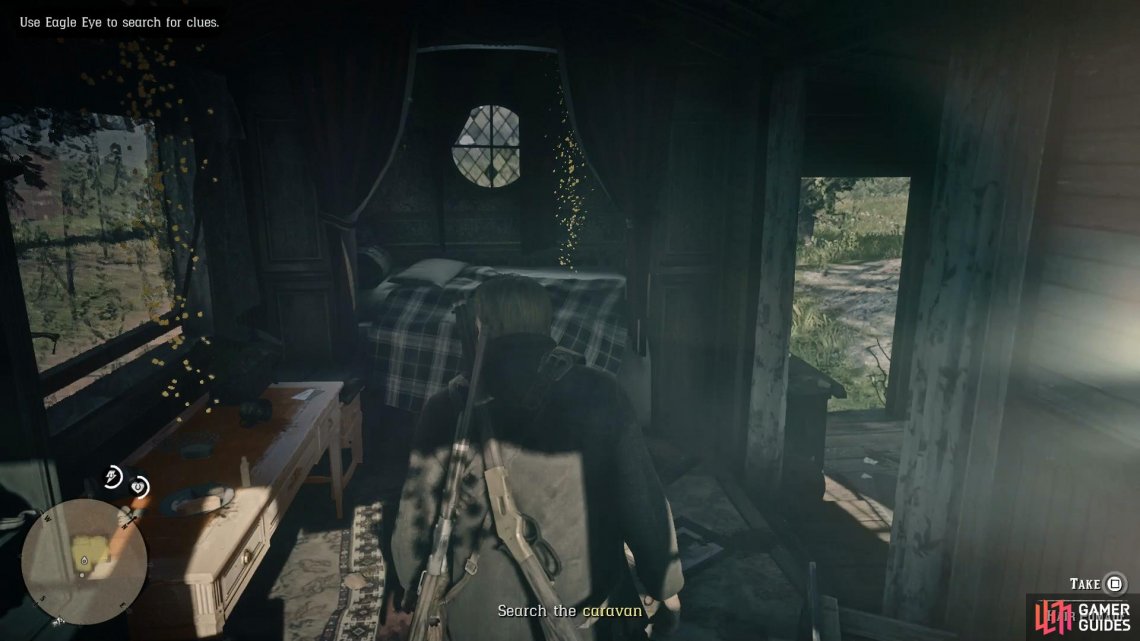 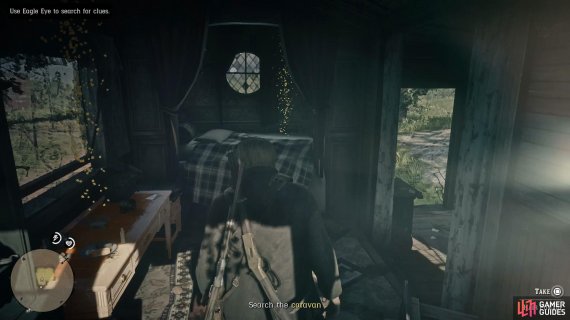 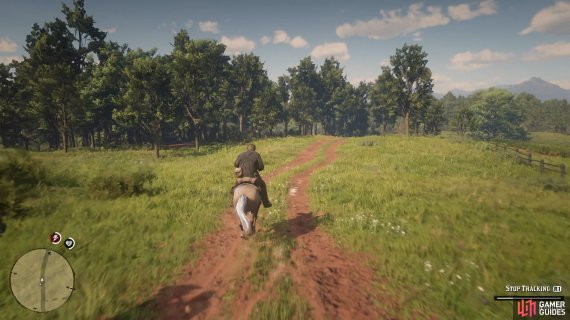 Use Eagle Eye to help you see the clues easier (left), don’t stray from the tracks on the ground. (right)

You’ll be able to pick up Trelawny’s Trail at this point, use Eagle Eye to see the tracks and then stick to them as you follow then, if you stray more than 30 feet away from them then you forfeit the Gold Medal. The tracks will lead you to a pair of men in a makeshift tent, question them about Trelawny and a brawl will break out. Make use of counterattacks to put the first man on the floor and then head over to the man Charles has pinned down to question him.

You’ll learn about a nearby cabin, follow Charles as you make your way there and discover Trelawny being taken away. Take off after the two Bounty Hunters as soon as they run off, you’ll need to quickly find two of them. You’ll find one in the left field and one in the right, towards the back, and you’ll need to eliminate both within 1 minute for the Gold Medal so consider using a shotgun here. The final Bounty Hunter is a little trickier to find as he drops his gear however Charles will pick up the trail. Search in the marked area and you’ll be jumped upon, thankfully Charles is on hand to help you. 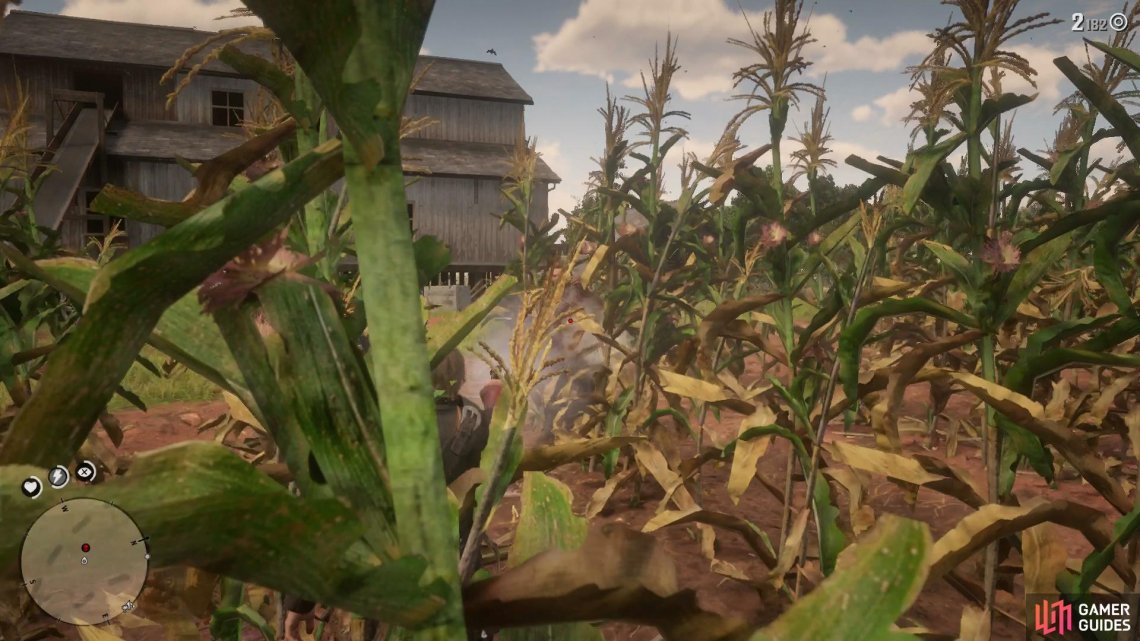 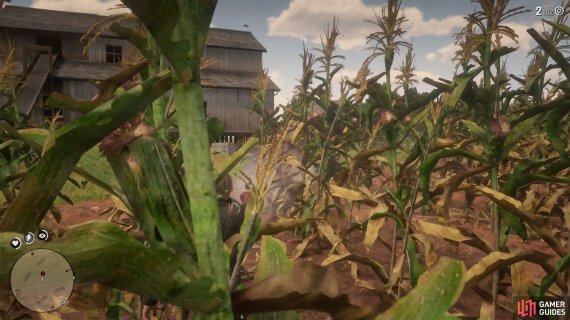 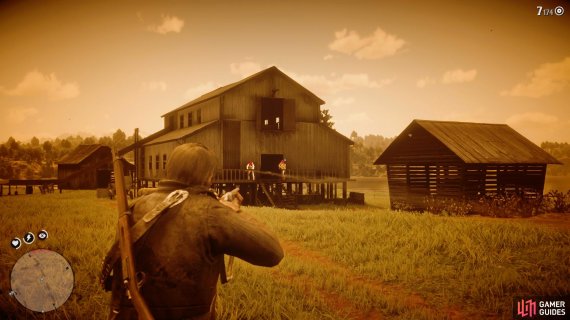 Search the left and right cornfields quickly for the Bounty Hunters (left), use Dead Eye as you approach the barn to take out the remaining enemies easily. (right)

You’ll be shot at shortly after from the nearby barn, head towards it and using a rifle, enter Dead Eye and kill the final two Bounty Hunters by the door. If you’re not quick enough then you’ll have to take the fight to the barn, stick to cover and take them both out. Before you leave however, be sure to search the Bounty Hunters from the barn, one of them has a Rare Rolling Block Rifle, a useful sniper and required for the Compendium. Pick it up and return to the cabin to check on Trelawny and end the mission.

If you don’t pick up the Rare Rolling Block Rifle during this mission, then it’s gone forever and you won’t get another chance at getting one.