The Gambler Challenges are exactly as they say, tasks that involve the Table Games such as Poker, Five Finger Fillet and Dominoes. Just like the real thing, a lot of this will come down to random chance so expect a lot of time to be dedicated to this set of challenges.

Your first task is a simple one, win five games of Poker in any way. Its best to play this at Flatneck Station where the stakes aren’t as high while you get to grips with the game. 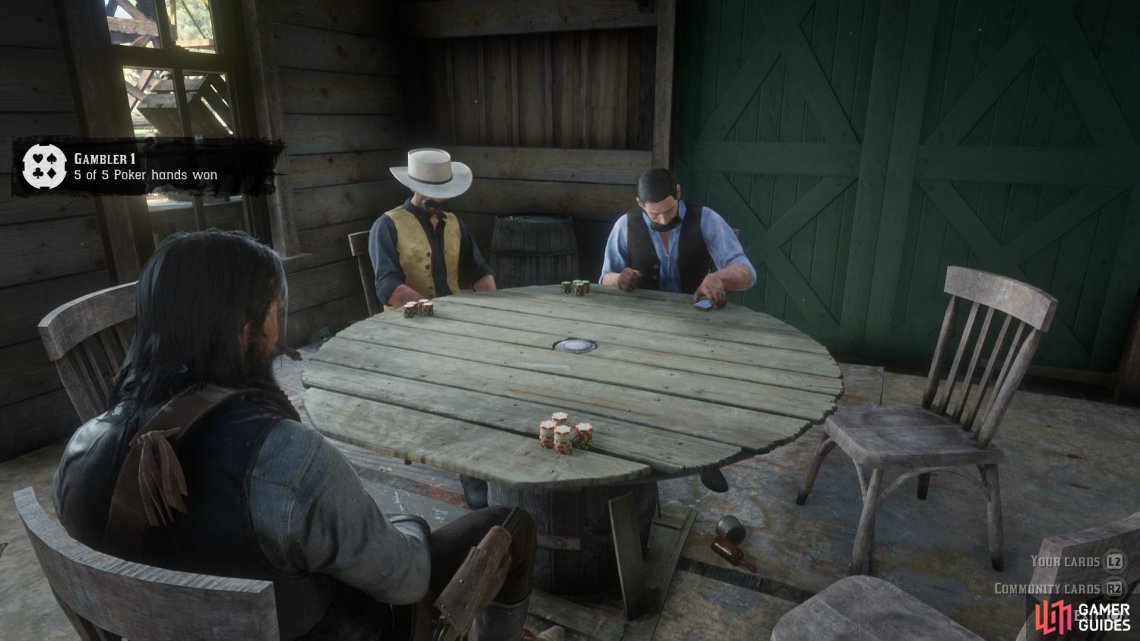 Simply win any five games to unlock the category.

For this challenge you’ll need to win at Blackjack five times while using a Double Down. This is a lot simpler than it may seem as all you need to do is head to a Saloon such as Blackwater, Saint Denis or Rhodes and choose to Double Down on your turn. A Double Down is essentially taking one more card and then settling for the outcome and your chance of winning increases if your hand is around 8-10. 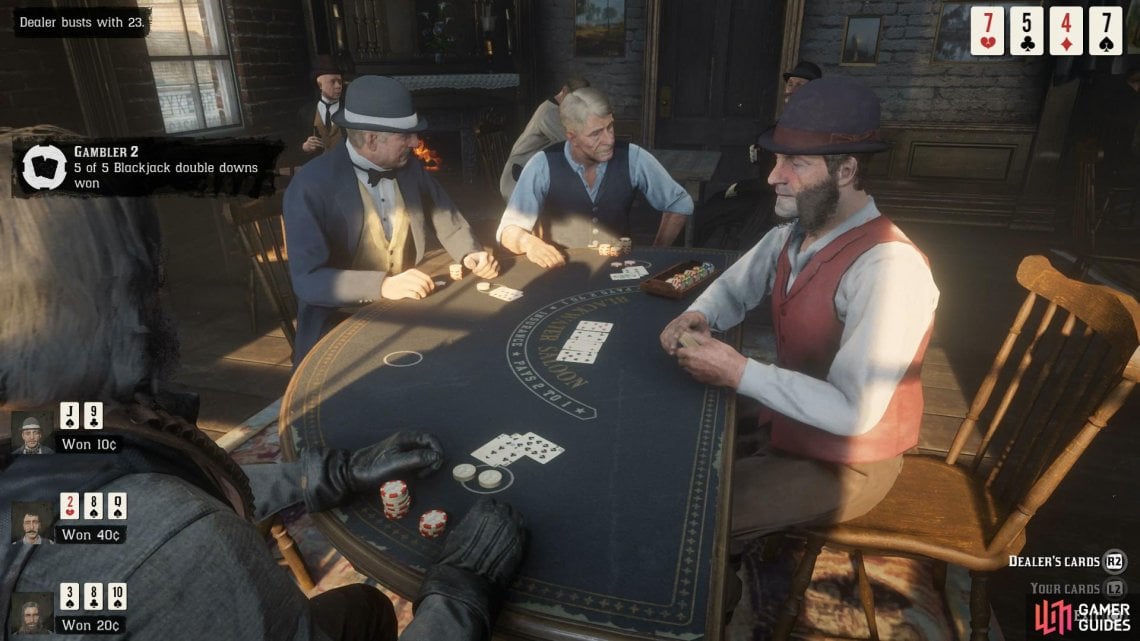 Choose to Double Down on every hand and you’ll complete this challenge in no time.

The next challenge sees you playing Five Finger Fillet, a game that requires you to press the buttons on screen in the correct sequence. You only need to win three games to complete the challenge and unless you’re an expert at the game, consider heading to each of the three locations (Valentine, Van Horn, Strawberry) and beating the first opponent there. You’ll only need to press two buttons whereas the later opponents require more inputs. Play the first opponent at each of the three locations to easily complete this challenge.

Challenge 4 sees you heading back to the Poker Tables in three locations, Flatneck Station, Valentine and Saint Denis. Here, you’ll need to force a player to Bust Out from a match by constantly going All-in. This will possibly cause them to Bust Out, leaving the game in the process. If money is of no concern, simply go All-in with every game of Poker until you get the notification that you have made some Bust Out. If you’re limited on funds, consider leaving this for later or save the game before playing a round. 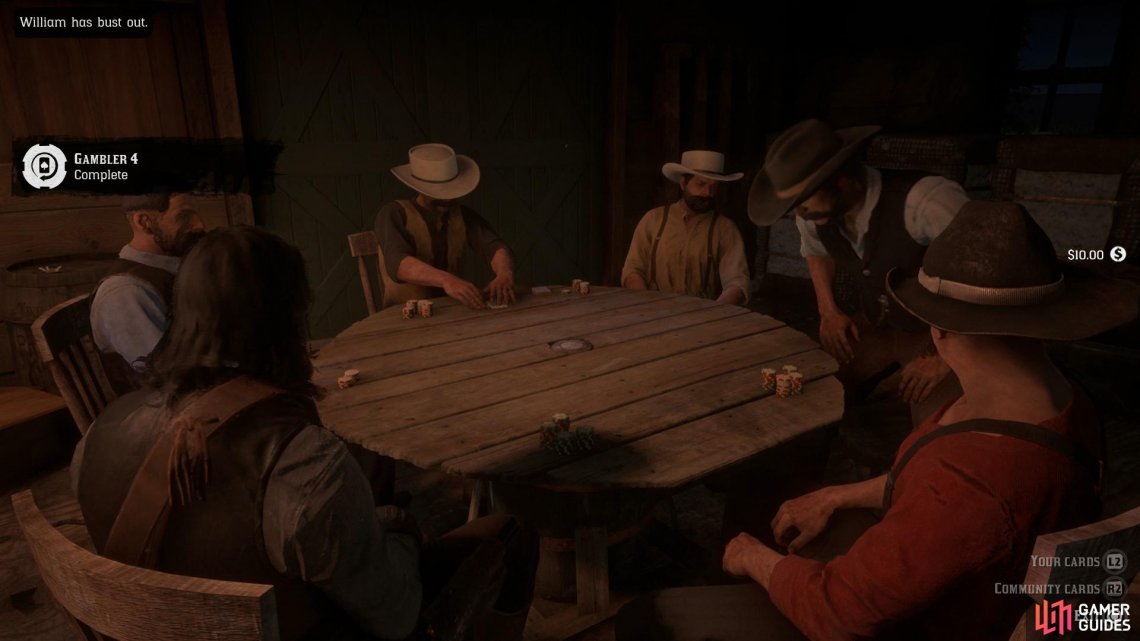 For Challenge 5, you’ll need to get used to Dominoes and how to win a round without drawing any tiles. Obviously, this is all chance based so all you can do is keep playing however make sure that you’re playing no more than two opponents. Saint Denis is the best location for this as you’ll often play only a single opponent. Note that you only need to win the rounds with Dominoes, not the entire game so don’t be too hasty to leave the game if you fail in the first round. 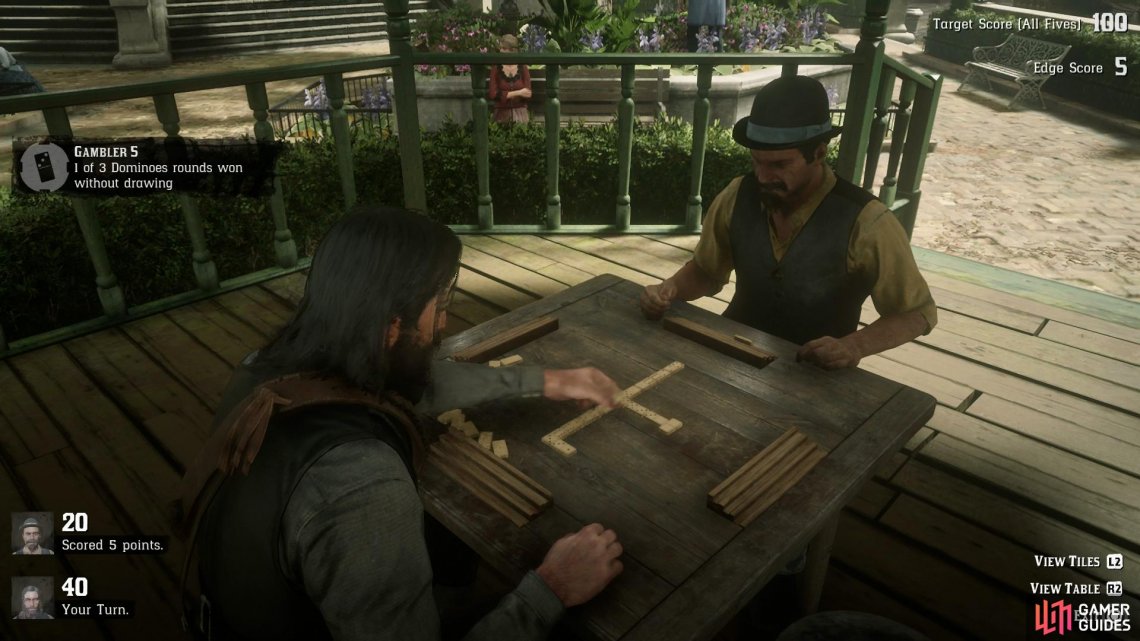 A rather simple challenge to complete this time around, all you have to do is simply beat the Blackjack dealer in Rhodes and Van Horn. Seeing as you’ve already completed the more difficult task in Challenge 2, you should have no problems here. Simply get as close to 21 as possible and you’ll beat both dealers rather simply. 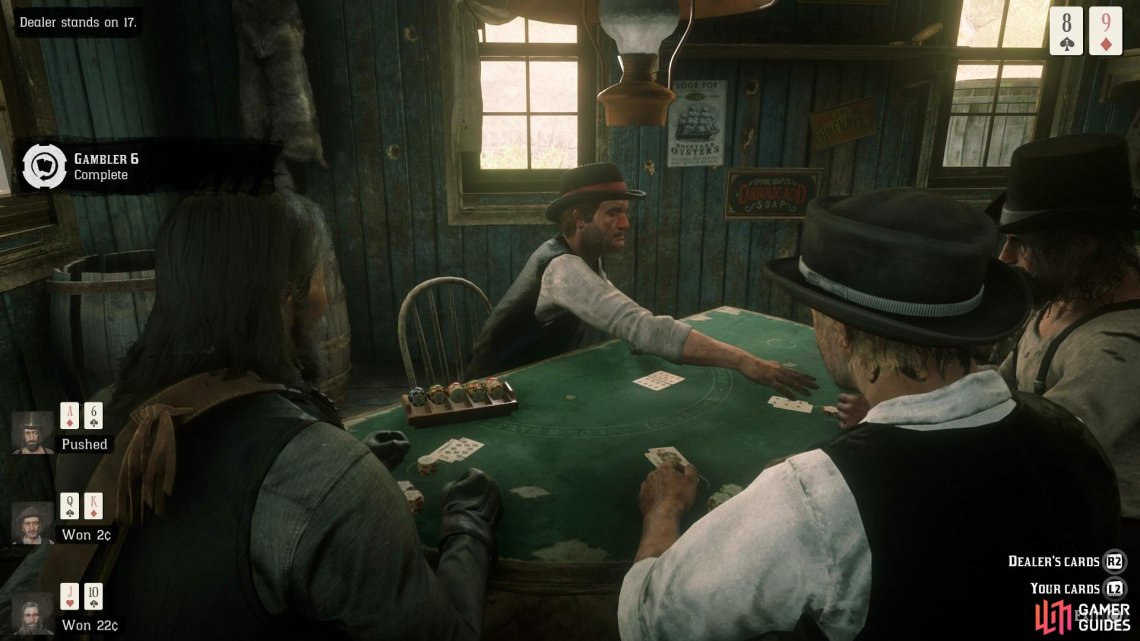 Another rather simple challenge, this one sees you winning against an opponent in Five Finger Fillet in all three locations, Van Horn, Strawberry and Valentine. The first round opponent will be simple to beat and only require two button presses so this shouldn’t cause any problems at all. This is arguably the toughest Gambler Challenge as you’re at the mercy of Lady Luck. You need to win three hands of Poker by hitting three times, this means you need to beat the dealer with five cards in your hand. There’s no easy way to do this, simply play Poker betting the lowest amount and then keep hitting until you have five cards. This could take days or you could be done in the matter of 10 minutes if Lady Luck does indeed smile upon you. 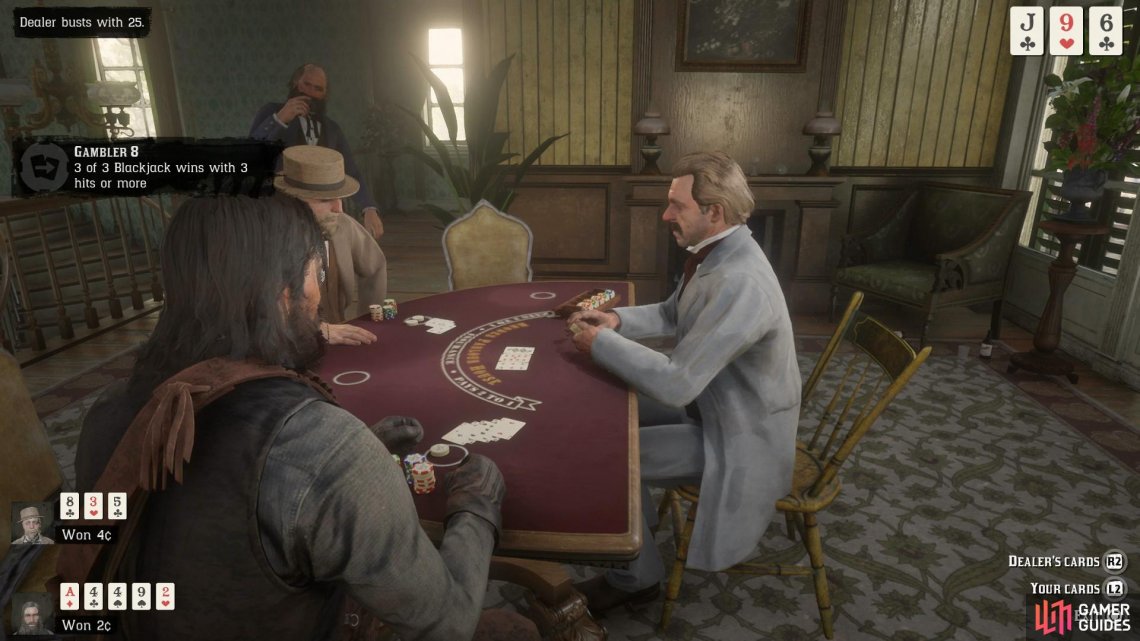 For Challenge 9, you’ll need to be a Dominoes expert and then pray Lady Luck deals you a nice hand. You must win three games of Dominoes without leaving the table, this is a lot harder than it may seem. Not only do you need to be competent at the game but if you get dealt a poor hand, there’s nothing you can do about it. All Fives at Saint Denis is the best destination for this Challenge and you’ll want to keep resting at the nearby saloon until you’re up against just one opponent. 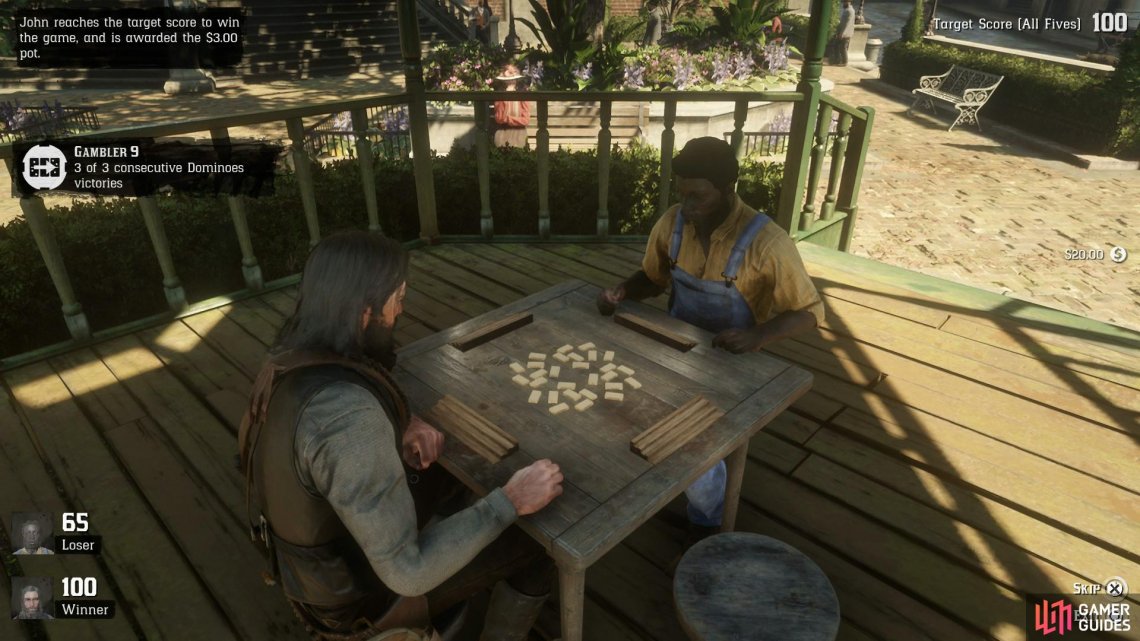 The final Challenge is not as difficult as the others, Poker is a lot easier to win than the other table games and like Challenge 9, you’ll need to win three consecutive games of Poker. This is a lot easier to achieve if you have a nice cash flow behind you, that way you can head to Valentine (the easiest place to scare off your opponents with big bets) and at the start of each hand, go All-in. This will force some of the opponents to bust out leaving you with only one or two and then it comes to the luck of the hand. 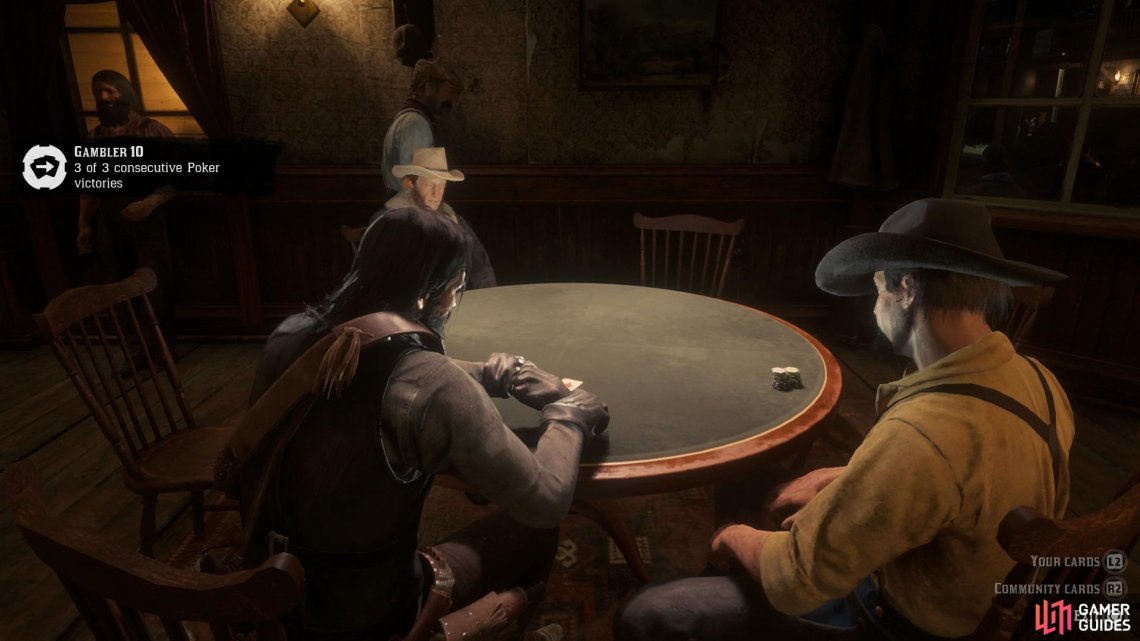