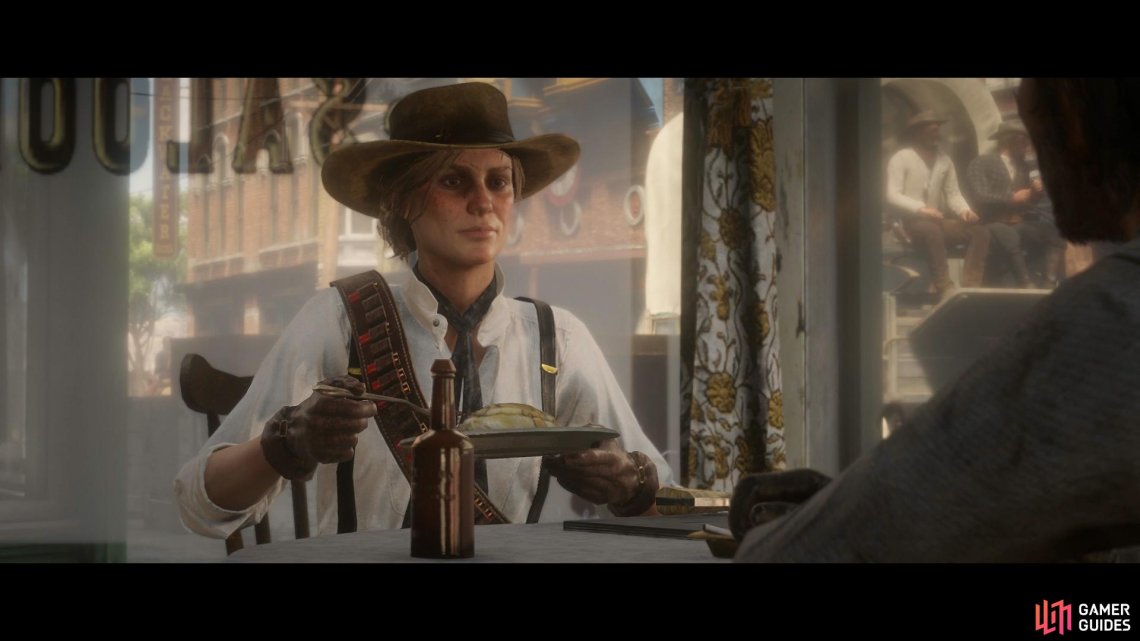 This is one of the more harder missions obtain a Gold Medal on in Red Dead Redemption 2. You’ll be involved in a frentic shootout so be sure to stop by the various stores in Blackwater to stock up on tonics and ammunition. You’ll meet Sadie in the saloon here who wishes to use your services on another bounty hunting job.

Ride out with Sadie and you’ll come to a stop overlooking Armadillo, take out your Binoculars and watch the men that come riding out. Follow them on horseback until you come to a stop at the canyon where Sadie will survey the area. Be sure to select your loadout once you dismount from the horse, at the very least you’ll want a competent rifle. When you’re given the choice, decide to go with shooting the gang, you’ll be on a time limit here for the Gold Medal so you may as well start killing as quickly as possible.

This next shootout will put you up against waves of Langton’s men and you’ll need to maintain above 70% accuracy while keeping on the move if you wish to reach Shane Finley at the bottom within 5 minutes. Begin the shootout by making use of Dead Eye and killing as many of the men at the bottom as possible. Once this group are dead, follow Sadie towards the path leading down to the canyon while killing any men in your path. 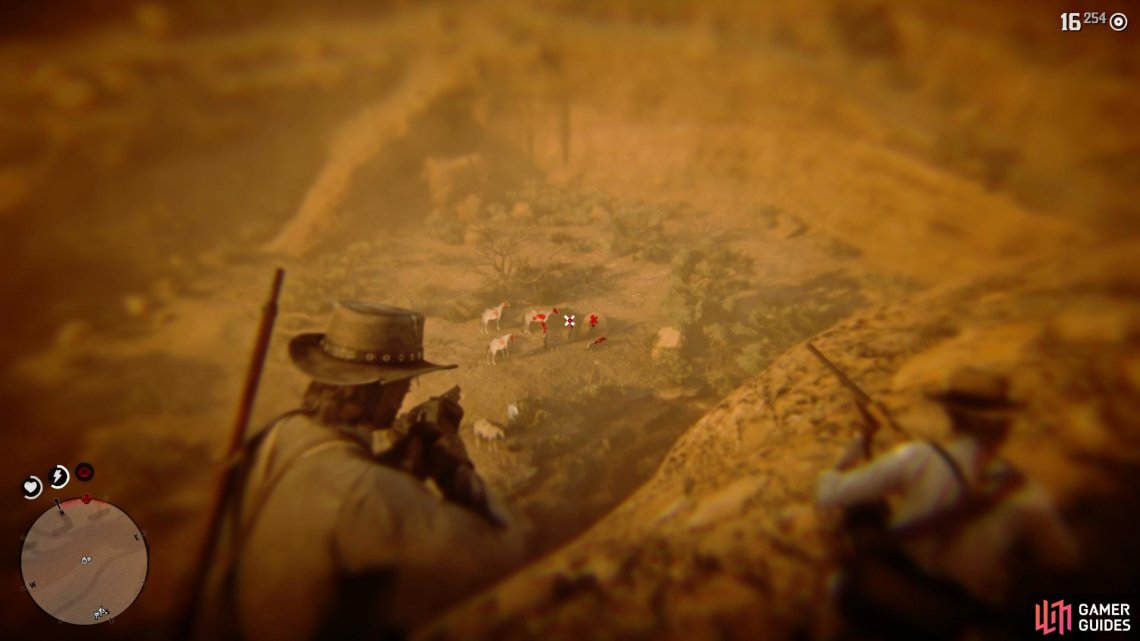 (1 of 2) Start the shootout with Dead Eye 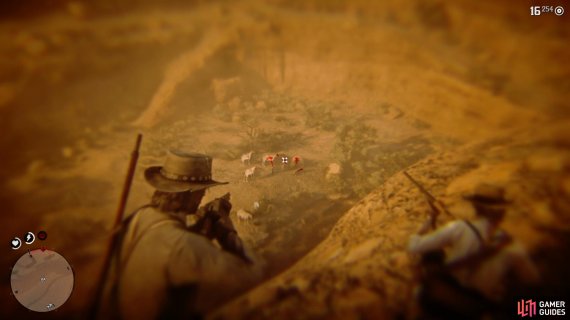 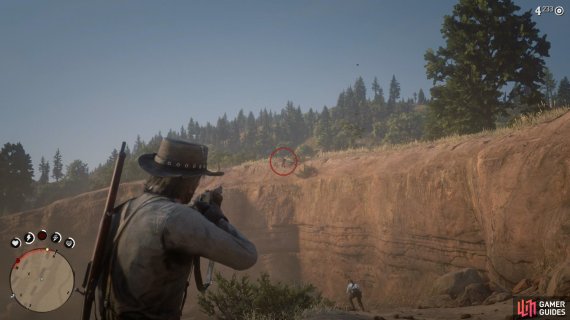 Start the shootout with Dead Eye (left), take care of the snipers as you descend down the path to Finley. (right)

Once you start heading down the canyon, you’ll start seeing snipers on the cliff edge, make these your main priority or else you’ll fall very quickly. If you have Snake Oils on you, consider drinking them so you can stay in Dead Eye more often as you make your way down the canyon. You don’t want to waste time in cover unless absolutely necessary or else you won’t make it down to Finley within 5 minutes. Once you stow Finley on your horse, another group of horseback men will ride in, dispatch them and then mount up yourself. 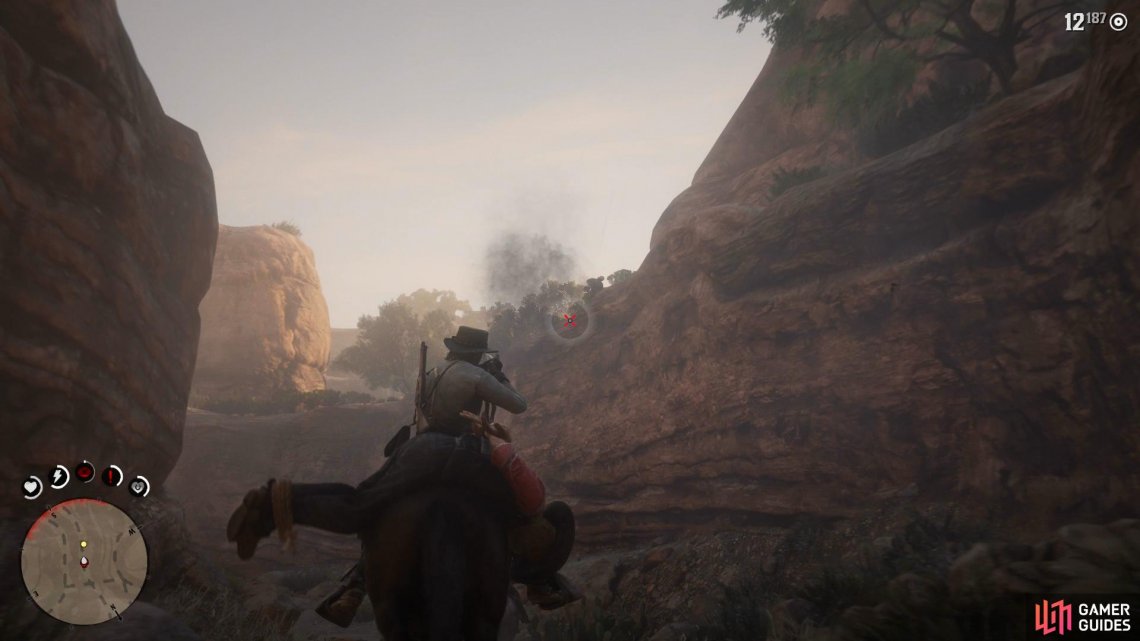 Make use of the radar to see where more men might be attacking from.

You’ll now have as much time as you need to escape, keep with Sadie but be sure to kill every last man in the canyon for the Gold Medal. The radar is useful here to spot where more threats are coming from and make use of Dead Eye to hit the targets on the bridge and the cliff edge. The final group of men will ride down from the left near the exit, you can switch to a shotgun here to finish them off and then ride out of the canyon. Safe at last, simply ride back with Sadie to Blackwater and dump Finley in a cell to complete the mission.