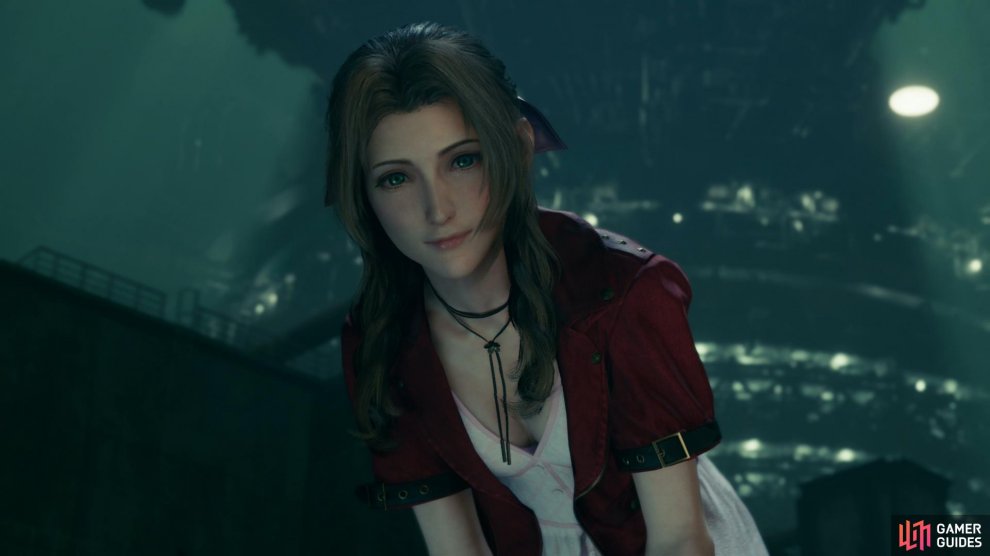 Aerith is the premier healer in the game, due to a combination of abilities and stats. It doesn't hurt that, with some exceptions, her weapons tend to boost her Magic Attack more than any other character's. Like Barret, her attacks are ranged, but her attack speed and damage output leaves much to be desired, so it's best to just use normal attacks to charge her ATB so she can do what she does best - cast spells.

While not quite a glass cannon, Aerith is the most fragile character in the game, having the lowest HP, STR, VIT and LCK, while possessing the highest MP, MAG and SPR. Still, a few points does not a mage make, but Aerith has the abilities to back up her claim as the top caster in the game. Or rather, the ability: "Arcane Ward" will place a fairly large ward on the ground, and if a character casts an offensive spell while standing in it, they'll automatically cast it twice. Granted, any caster can make use of this, and Aerith doesn't even need to target herself, but with her tendency to have the highest MAG score in the party and the sheer convenience of commanding her to use this while you tank/aggro with another character, she'll likely make use of it the most. Not only is "Arcane Ward" incredibly powerful, but she starts the game with access to it, so she's a beast from the moment she joins your party. Her other abilities are... fine, "Soul Drain" can leech you some MP - an issue which, with planning, you'll never need to worry about and "Ray of Judgment" is her attempt to contribute to inflicting Stagger, but there's rarely a time you wouldn't rather just double-cast an offensive spell or use some buff or debuff.

Aerith is your caster, so obviously the weapon with the highest Magic Attack is the best one to use, right? Well... no. There are other considerations to be made, and all things considered we view the Silver Staff as the best weapon to use, especially in Hard difficulty. Despite not having the highest Magic Attack, it does have the third highest among all her weapons, and you can buy bonuses to elemental damage inflicted by offensive spells, which helps. It also has Attack/Healing Spell MP Cost Reduction and MP Regeneration 50% Boost, which will help keep her MP up. Best of all, it has Reprieve. All things considered, it'll probably serve you better than her other weapons.