Anyway, do you remember what we taught you about battles in the previous page? Here’s something we skipped that wasn’t important before, but is very important now.

In most battles, all characters begin with 0 BP and they will always automatically gain 1 BP at the end of each turn (unless they cannot act). Each action costs 1 BP, so if you use an action, your BP will go from 0 to -1 in the middle of the turn, then return to 0 for the beginning of the next turn. Okay, so a number is going from 0 to 0; what’s special about that?

Well, nothing… until you use the very special Brave or Default commands that is!

Brave: Spend 1 BP (Brave Point) to give your character an extra action; can be used up to three times in the same turn, spending an extra 3 BP and allowing for a maximum of four actions. Can be triggered with the L button.

Default: Forfeit your turn and save up 1 BP for the next turn; cannot be used if you choose Brave. Also reduces damage sustained during this turn. Can be triggered with the R button.

We realize Brave and Default can be difficult to understand by themselves. The easiest way to figure out what they do is to keep using them until you grasp how they work. But to speed up your learning, we do believe it’s example time! 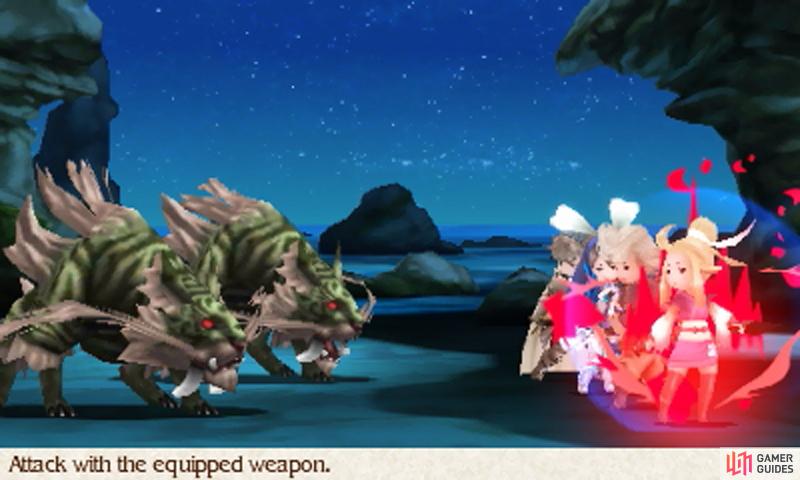 (1 of 2) Using Brave, you can perform multiple actions by spending “turns” from the future or ones you’ve saved up. 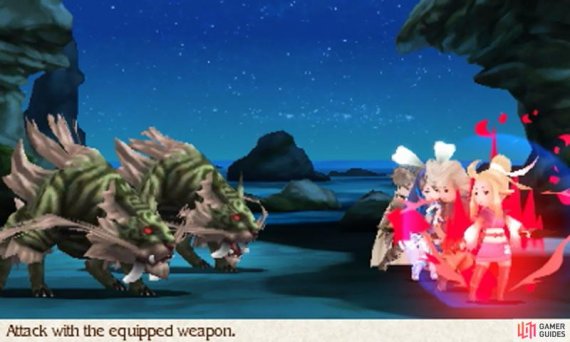 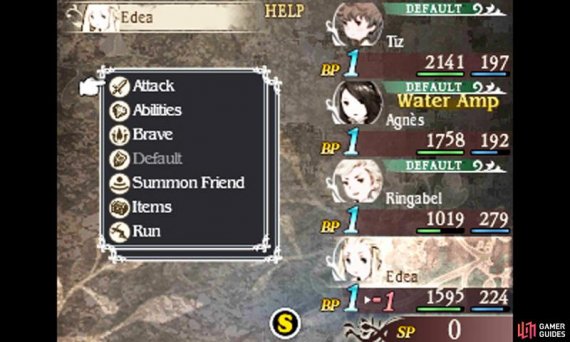 Using Brave, you can perform multiple actions by spending “turns” from the future or ones you’ve saved up. (left), (right)

First, try selecting Brave once to increase your number of moves. After using Brave, your character can now perform a second action after their first, allowing them to perform two actions (such as two attacks) in one turn. Assuming you start at 0 BP, you’ll have spent 1 BP for the first action and 1 BP for the second action, putting you at -2 BP.

Once the next turn arrives, you’ll automatically get 1 BP, but that only places you at -1 BP. Here’s the other thing we must mention:

Note: When a character starts the turn with negative BP, they will be unable to act for that turn.

Since your character spent 1 BP that they couldn’t afford–in other words, one turn from the future, they now have to pay back their debt. Which leaves them immobile and vulnerable to attack for one turn until they earn that 1 BP back. What do you mean we should have told you earlier? 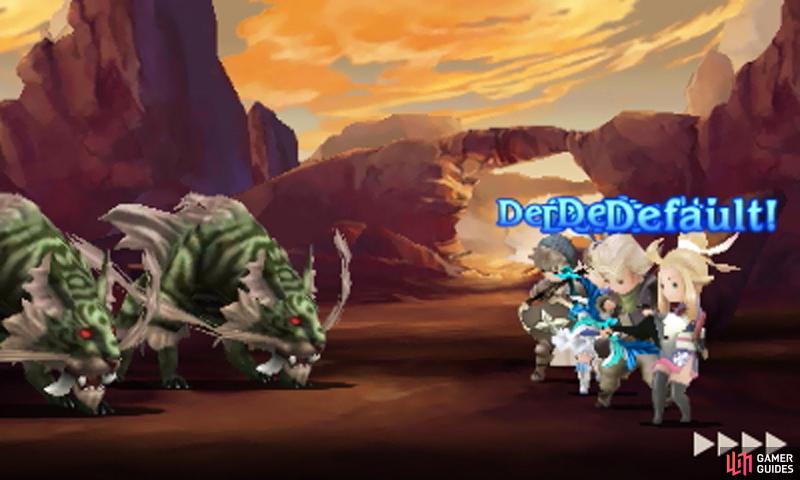 (1 of 2) Default forfeits your character’s turn, but reduces the damage sustained and adds that turn into your “bank”. 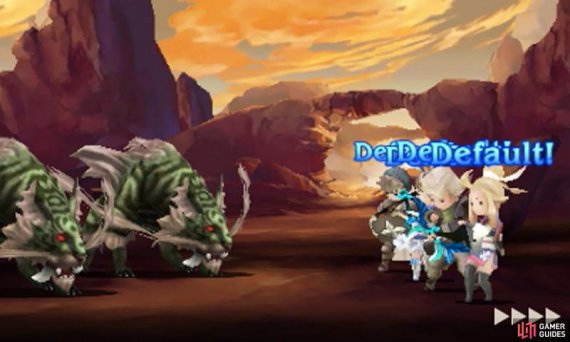 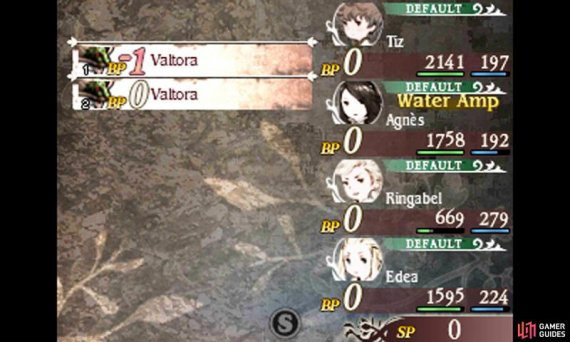 Default forfeits your character’s turn, but reduces the damage sustained and adds that turn into your “bank”. (left), (right)

Now try using Brave once like in the previous example. As before, your character can perform two actions by spending 2 BP total. When the next turn arrives, something different will occur though–your character will be able to act! This is because you went in with 1 BP; you didn’t spend a turn from the future but rather one you saved up yourself!

Here’s the thing: don’t forget that Default reduces damage. In the scenario where you use Default, your character took reduced damage in the first turn, compared to full damage without Default. If you know the enemy is going to take a while to defeat, you’d be wise to use Default to bide your time and reduce the damage, until you’ve saved up some moves.

We’ve explained the benefit of Default, but what about Brave? Is it only good for unleashing all your moves after using Default to hold the fort? Well, if you know you can defeat the enemy in a few moves, you can take the risk and Brave multiple times at the start of battle, for example.

That way, if you successfully defeat the enemy, you’ll take no damage at all–which is better than using Default. However if you misjudged your moves and fail to slay the enemy, your character could become immobile for a number of turns, putting you in a very dangerous position. There’s a lot of calculated risk involved with using Brave, but if used wisely, it can be most rewarding! 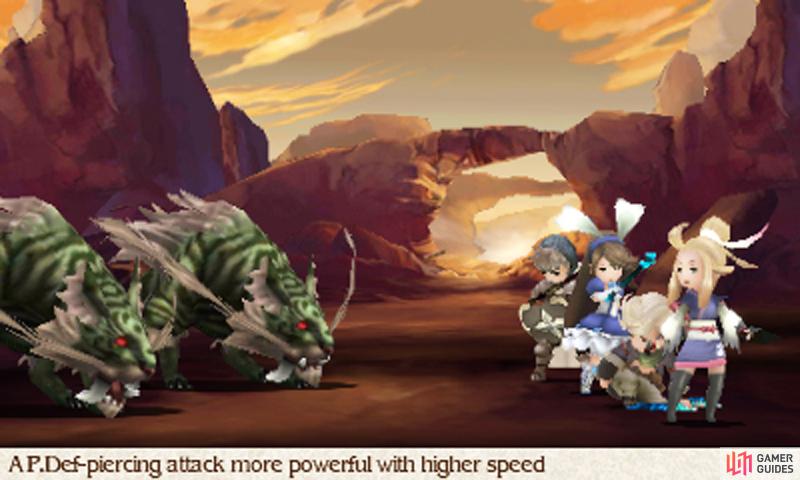 (1 of 2) Every standard action costs 1 BP normally. However if a BP cost is explicitly specified, that means you have to pay 1 BP plus the specified amount. 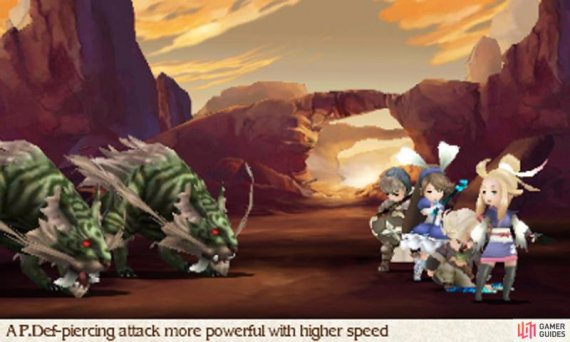 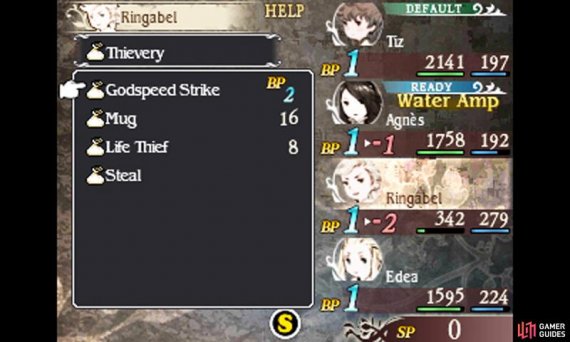 Every standard action costs 1 BP normally. However if a BP cost is explicitly specified, that means you have to pay 1 BP plus the specified amount. (left), (right)

Okay, so you might know how Brave and Default work with standard actions. There’s another slight complication though, as some command abilities have a BP cost, on top of the standard 1 BP cost for each action. However, if you have a good understanding of how BP works and do the maths, it shouldn’t be hard to figure out how these fit in.

For example, the Valkyrie’s Crescent Moon costs 1 BP. If you start at 0 BP and use it, it will cost you 2 BP altogether (1 BP for the action and 1 BP for the ability), placing you at -1 BP at the start of the next turn. Effectively, using Crescent Moon works out the same as performing two actions in one turn.

By this logic, you could Default once first, then use Crescent Moon at 1 BP, which will bring you to 0 BP at the start of the next turn–a much safer place to be. Of course, what you choose to do depends on the situation. Maybe the enemy mob is on its last legs, in which case going negative isn’t going to hurt you.