Can you call yourself a RPG without pages of mind-boggling stats and numbers? Nah, we didn’t think so. In typical fashion, the performance of your characters is dependant on their stats. You can increase your characters’ stats when they Level Up (by gaining experience points from battles) or by purchasing better gear. The characters’ current job also has a marked effect on their stats.

This game certainly doesn’t skimp with the stats; you can view pages of them from the Equip menu or the Config -> Status menu. Fortunately the game makes it slightly easier to figure out what each stat does, as you can touch the name of each stat on the bottom screen to receive a simple description.

This page displays the stats that directly influence the outcome of battle. Most of the time, you’ll only need to check this page to judge how your character will fare.

If you’re viewing this page from the Status menu, the game will also display the character’s innate values in brackets (unaffected by job and equipment).

are any attacks made with a weapon, such as a Sword; most command abilities that inflict damage are physical attacks too.

Magic-based attacks primarily include magic spells, such as those learned by Black Mages. 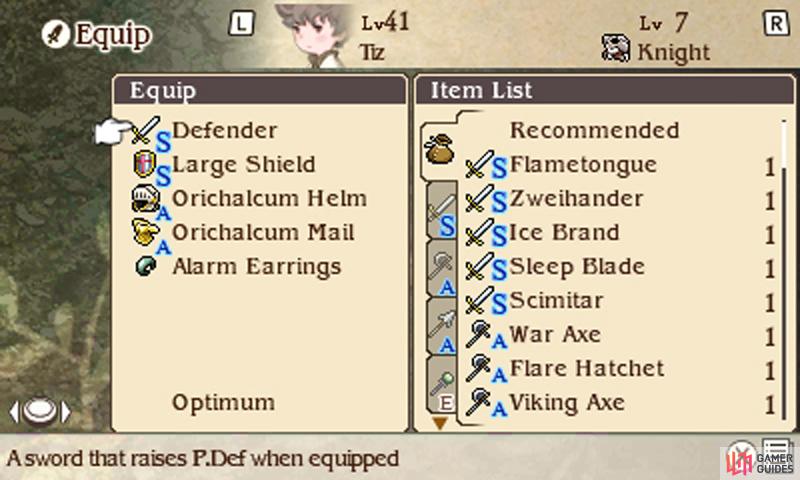 (1 of 2) Here, Tiz has a weapon equipped in his right hand and a shield in his left hand. Which is a fairly standard setup. 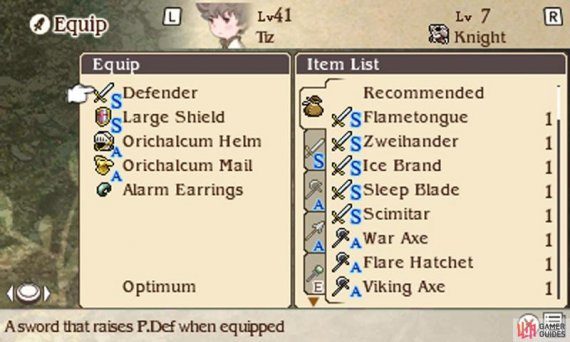 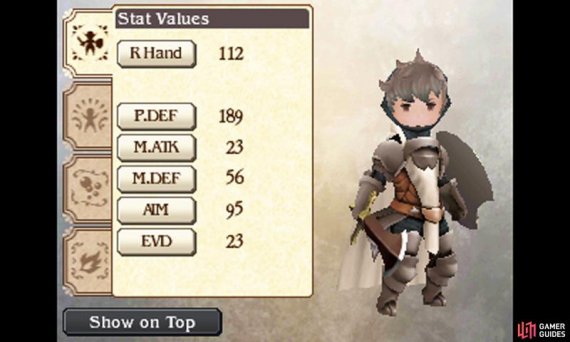 Here, Tiz has a weapon equipped in his right hand and a shield in his left hand. Which is a fairly standard setup. (left), (right)

Normally, you will only equip weapons onto a character’s right hand, but there may be occasions where you equip a weapon onto their left hand too. When this occurs, there will also be a Left Hand stat that functions like the Right Hand stat. Normally, equipping a weapon on both hands cuts the Physical Attack of both weapons in half, so more isn’t always better!

When you equip the Knight’s Two-Handed ability onto a character, if they have a Sword, Axe, Spear, Staff or Katana equipped in their right hand and nothing equipped on their left hand, their Right Hand stat will morph into a Two-Hand stat. Now your character will wield the original one-handed weapon in both hands and receive a boost in Physical Attack.

This page depicts the underlying stats that influence the Stat Values and more. Annoyingly, some key stats are hidden in this page and the game doesn’t do a wonderful job of explaining what they do.

If you’re viewing this page from the Status menu, the game will also display the character’s innate values in brackets.

It’s not often mentioned, but a Brave Attack is when you begin a random battle with 1 BP for each party member.

A first strike is easier to figure out–it’s when your party begins a random battle with a full turn to act without the enemy interrupting. 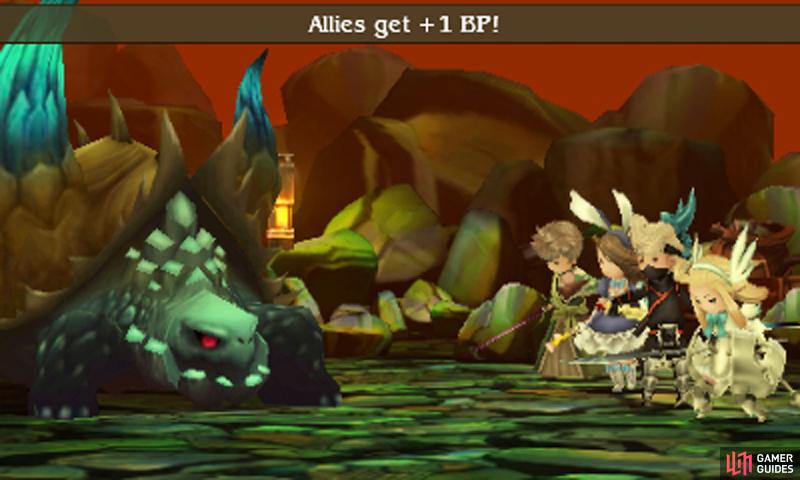 (1 of 2) During a Brave Attack, your characters begin the battle with 1 BP each; fantastic for unleashing multiple hits from the onset. 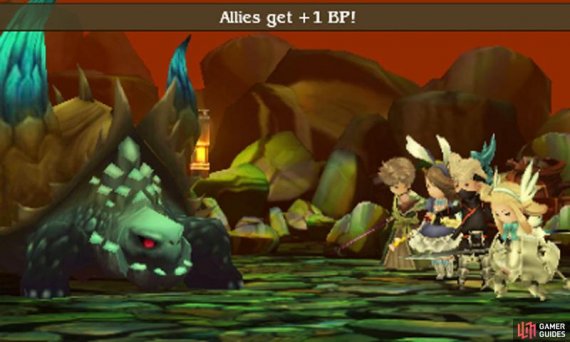 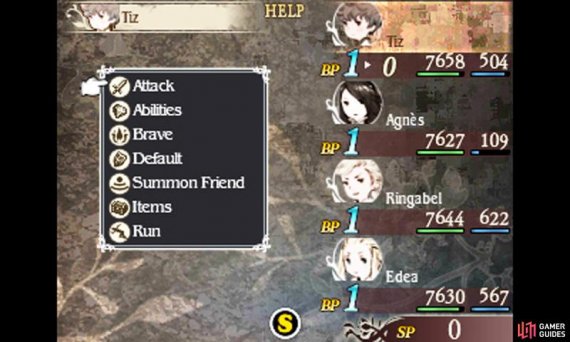 During a Brave Attack, your characters begin the battle with 1 BP each; fantastic for unleashing multiple hits from the onset. (left), (right)

Number of hits affects your normal attacks only (when you use the “Attack” command). When you use a normal attack, your character will hit the enemy a certain number of times; for example, 6 times. The more hits you do, the higher your damage.

What isn’t immediately obvious is that Aim also affects the number of hits; sometimes, you may notice your characters deals less hits than in a previous attack (like 2 hits instead of 9). This is because some of their hits missed the enemy and thus don’t register in the figure. If you have high Aim, you’ll find your number of hits is more consistent.

Last, but not least, turn order is very important and the game makes little mention of this. Characters with higher Agility (and thus Speed) will act earlier in battle, so the order in which characters perform actions isn’t totally random. However; it’s still partially random, as characters with slightly less Speed can occasionally move before faster characters - you just have to learn to deal with it.

The third page simply show what status ailments your character is immune to. If anything is listed here, that’s wonderful as you won’t be inflicted by those ailments!