Happy New Year! What better way to celebrate the brand new year than the super-boss to end all super-bosses? Nope, this ain’t no Beelzebub–it’s Tako-Izumi aka Kamiizumi with a vengeance!

Before stumbling into this “party”, you may wish to swap your attackers to magic jobs (Time Mage preferably, for Meteor) as Tako-Izumi has maximum Physical Defense. 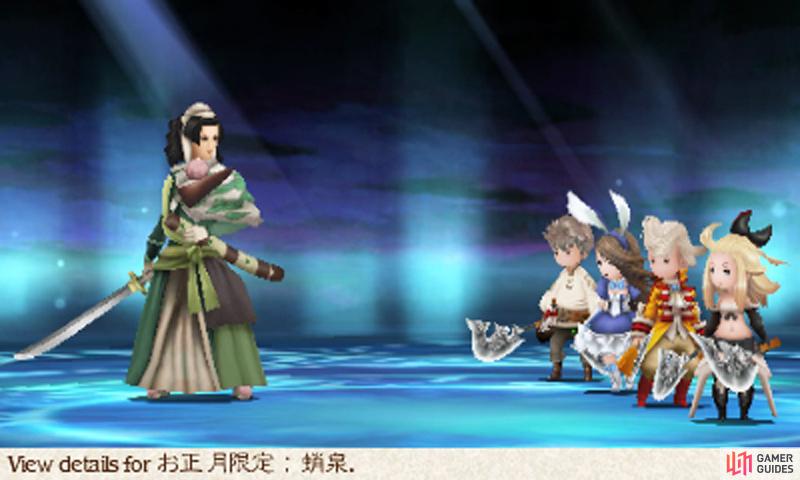 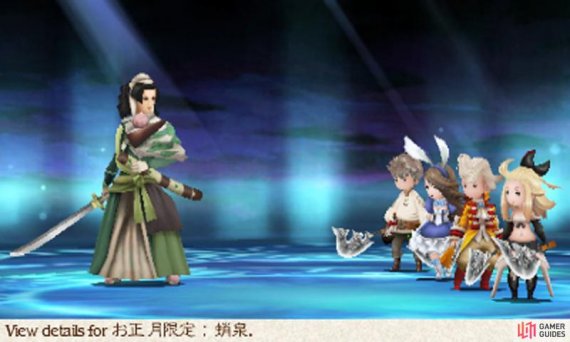 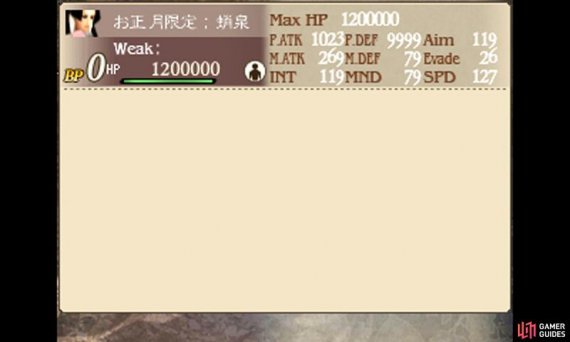 If you’re fighting normally, be prepared for a rough time. Tako-Izumi has insane Strength, dealing around 9999 damage with each normal attack; definitely have a Salve-maker compound a few Giant’s Drafts to raise everyone’s HP above 9999. When Tako’s not stabbing your characters, he’s summoning Susano-o for non-elemental magic damage.

To protect your party, have a Templar (or someone with the job command) use Rampart, to shield your party from one attack (and thus 9999 worth of damage). Then put up Rampart again once half your party has lost its protection. Meanwhile your healer (ideally a Salve-maker for Healing Lore) should be healing or Defaulting full-time.

The snack-lover also counters physical moves automatically (so another reason to drop your physical jobs) and uses Nothing Ventured and Before Swine to counter your physical and magical attacks respectively. On occasions, he will Brave once to do a normal attack and summon Susano-o, leaving him open for one turn–make that turn count and unleash your fury, while patching up your party.

Just when you thought Tako-Izumi was tough enough already, he raises the bar sky-high once he nears half HP. At this stage, he will frequently Brave the maximum amount of times, starting with Large BP Drink to up his BP by 3 (returning him to 0 BP for the next turn), followed by two normal hits and Susano-o.

This is where your defenses, if you kept them, will likely start to fragment. Your main priority should be keeping your healer alive; with Rampart, they should be able to survive two normal hits, but the damage from Susano-o could tip them over when they’re not Defaulting. What you can do is make your healer compound a Dragon Soul or Demon Soul to buff their own Magic Defense.

In preparation for unexpected deaths (or perhaps expected, in this case), you can compound Font of Life or have you Time Mages cast Reraise to auto-revive from K.O. and equip the Vampire‘s Rise From Dead for a 50% chance of revival each turn. The Vampire’s Absorb Physical Damage can also help to keep your characters still standing.

We must warn you that losing your healer or Rampart user at this point can potentially jeopardize the whole battle. While you can revive them, Tako will be attacking your party relentlessly, leaving you with limited room to manoeuver. To avoid this situation, you can use the Merchant‘s Low Leverage to halve Tako-Izumi’s damage, even though this will halve your damage too.

One last thing: Tako can still use Nothing Ventured and Before Swine below half HP, so don’t spam all your attacks at him during this phase or you may suffer serious casualties. Instead, only have one Time Mage unleash their moves in a given turn–if they get killed by Before Swine, at least it’s just one character dead and not three. 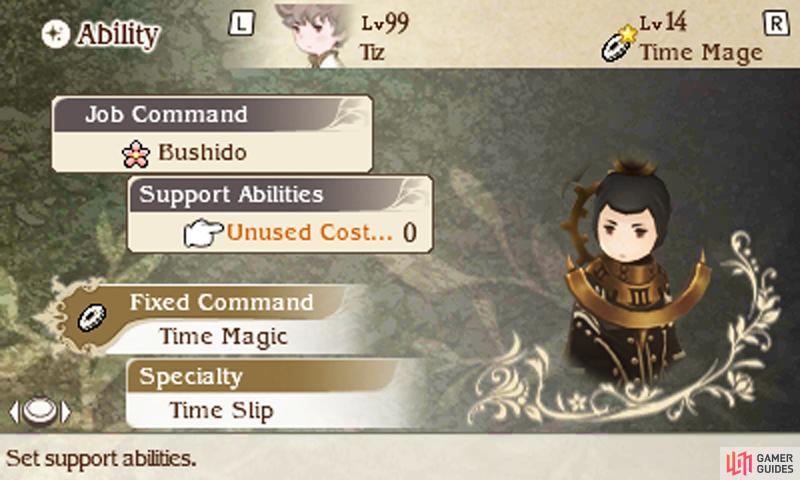 (1 of 2) Time Mages aren’t very speedy, so slap on a pair of Hermes Shoes and anything that adds to your Speed. 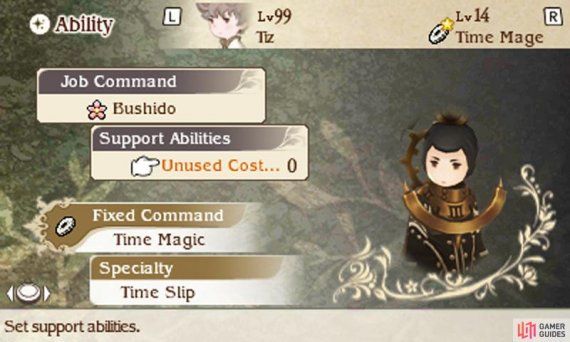 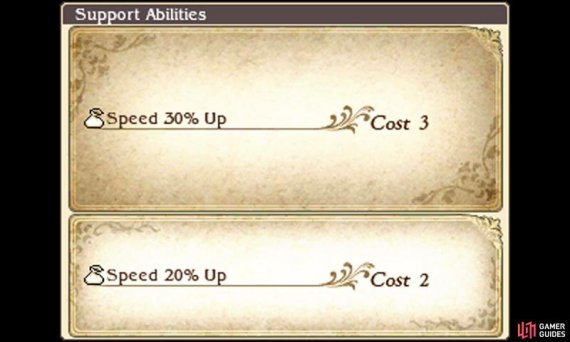 Time Mages aren’t very speedy, so slap on a pair of Hermes Shoes and anything that adds to your Speed. (left), (right)

Tako-Izumi is without a doubt the toughest boss in the game (at the time of writing), so don’t be discouraged if he mangles your party. With that said, he can still be cheesed with the right setup. What you want is three Time Mages with the Swordmaster job command, dual-wielding Fox Tails (no need for the Dual Wield ability) and all the best Speed boosts.

A fourth character should be a Spiritmaster with the Performer job command (or vice versa), also dual-wielding Fox Tails and with Hasten World (Time Mage); this character should have more Speed than Tako-Izumi (over 150), but less Speed than your Time Mages.

Then turn on Auto-Battle and sit back and relax! Watch out that Tako can use Before Swine on his first turn to wipe out your Time Mages–if this happens, simply try again as Time Slip will restart the battle (and if he does it again just reload the game). If Tako doesn’t use Before Swine, he won’t use it again thanks to Hasten World feeding him BP.