With a name like “Satan”, you can just tell this guy ain’t going to be easy.

Ironically, Satan starts off easy, using Slash to hurt one character. When you start attacking him though, he reveals a particularly nasty trick–Revenge (same as the Red Mage ability), which has a chance of increasing his BP by 1 each time he takes a hit.

If you anger Satan and get him to 3 BP, you’ve practically lost already. He will use all three Battle Blades, ending with Battle Blade IV for 9999 damage to your party, which is pretty much a guaranteed Game Over. As you can probably tell, feeding Satan too much BP is a bad, bad thing.

Unlike DeRosa, where you could afford to let the dandy build up BP by Defaulting to weather the pain, there’s no reliable defense against Battle Blade IV (at least, not where you’re Level 50). What you can do is have a Salve-maker compound Font of Life for all your characters, which automatically resurrects them upon death.

But your safest bet for winning is to drastically limit your attacks per turn so Satan doesn’t have a chance to reach 3 BP. Annoyingly, Satan doesn’t make it easy for you. He can use Wrath to inflict Berserk on your party, causing your characters to attack Satan mindlessly, thus increasing the likelihood of him gaining BP. Oops…

As soon as your characters are hit by Berserk, use Esunaga (White Magic), Remedy or other means to cure them. For best results, make sure your healer is faster than your other characters, but still has high Mind to avoid Berserk. If your characters are on par with Satan, this battle will likely be a long test of patience. 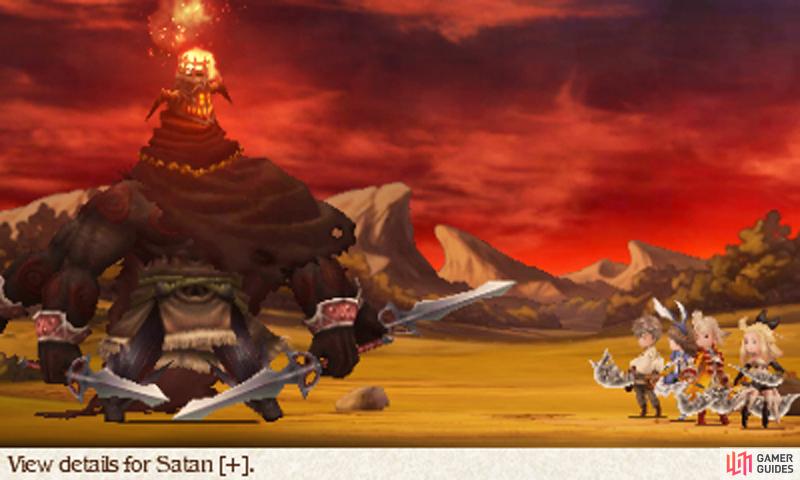 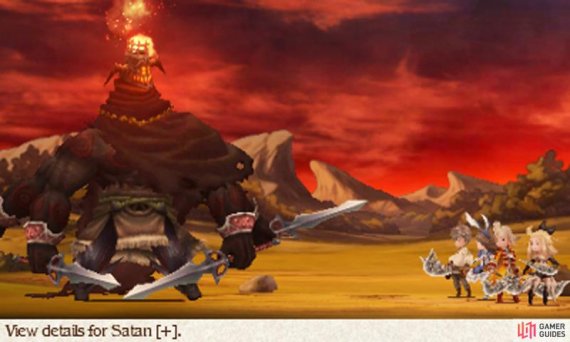 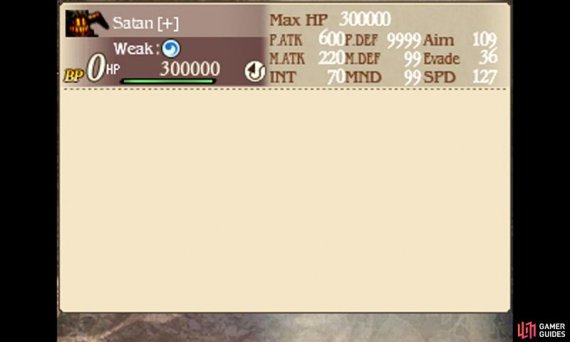 Hmm, we’re sensing a dangerous trend here with the (+) Nemeses…

Satan on steroids has maximum Physical Defense, so drop your physical jobs and bring out your Time Mages and Conjurers, etc. Like Mammon(+), Satan(+) has 127 Speed and Slow and Steady, to boost it up to 190 after it Defaults.

For this battle, you should field a Performer (or somebody with the job command) and use Zero Sum to constantly drop Satan’s BP. Although be warned that Zero Sum can trigger Revenge too, but it’s more safer using it than not. You should also have a Spiritmaster with Fairy Ward on standby to protect your party from Berserk.

As Satan has incredible Speed, a super-fast party is recommended–ideally, everyone should be Dual-wielding Fox Tails and have a Hermes Shoes equipped (or at least your Spiritmaster and/or healer). You can get the weapons by upgrading Norende or the shoes by stealing from DeRosa in Chapter 7.

This way, you can cast Fairy Ward before Satan uses Wrath or heal your party before a Battle Blade onslaught. Don’t hesitate to use Speed boosts of your own, like the Time Mage’s Haste or Performer’s Love Rush.

It might help if your character using Zero Sum goes after Satan (which isn’t hard given his high Speed) so you can pummel Satan with multiple moves, before finishing your turn with Zero Sum to drop his BP back down. If you grasp the proper timing with Zero Sum and remember to keep Fairy Ward up, this battle isn’t too tough.

You can also have a Spiritmaster use Stillness to negate the damage from all Battle Blades, but you should use the Performer’s Love Rush to keep up with Satan’s insane Speed.

The Stillness and Hasten World Auto-battle strategy doesn’t work well here because of Berserk and Battle Blade I, but is doable if you have a second support character with super-high Mind to shrug off Berserk and cast Esunaga and Curaga each turn.