Welcome to the first star of the game, where the main objective will be to defeat the King Bob-Omb on the summit of the mountain. The first thing you should do is get the layout of the stage ingrained in your mind, as each course has a total of seven stars in it. If you need a general look at things, visit the Bob-Omb Battlefield’s Overview page for some pointers. To get to the top of the mountain, head up the wooden ramp in front of you, minding the Goomba that might start chasing after you. Follow the dirt path before you, as you run past the Chain Chomp. Whenever you get close to it, the Chain Chomp will lunge towards you to try and take a bite out of Mario. 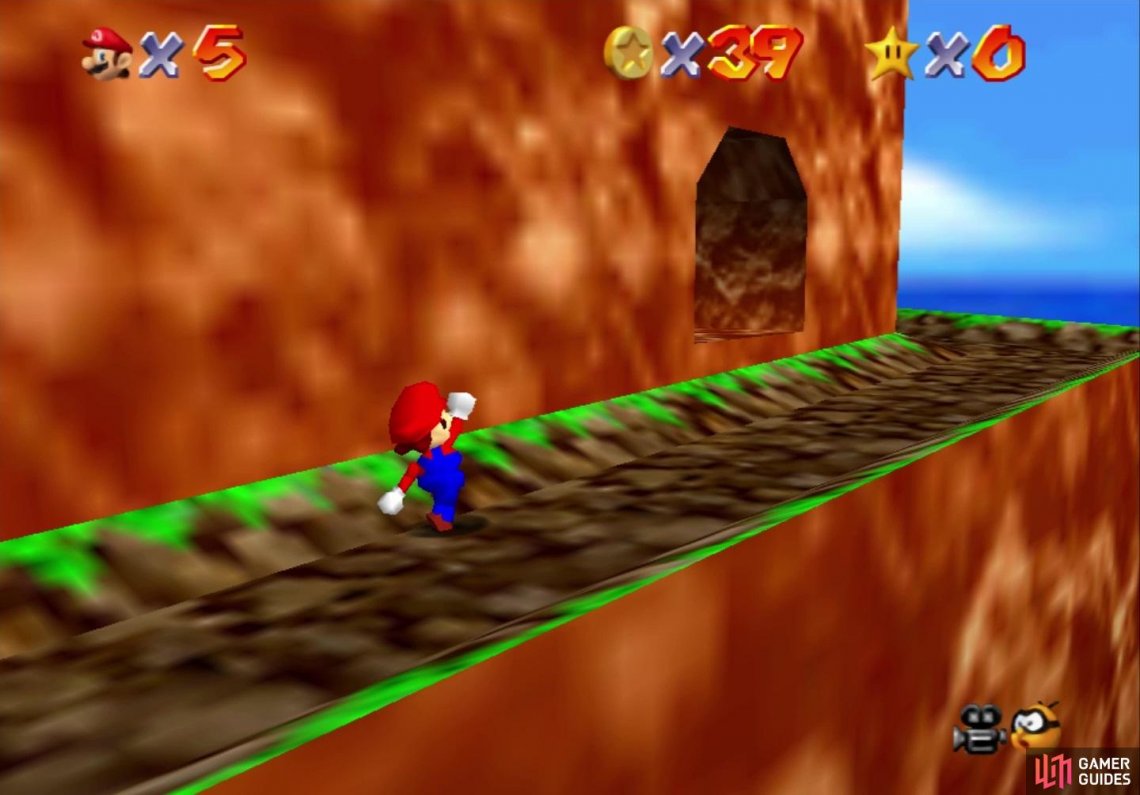 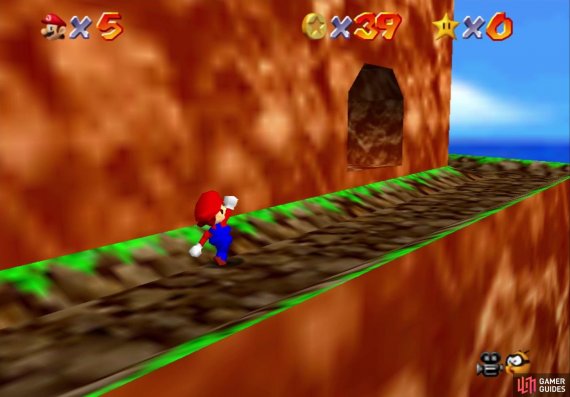 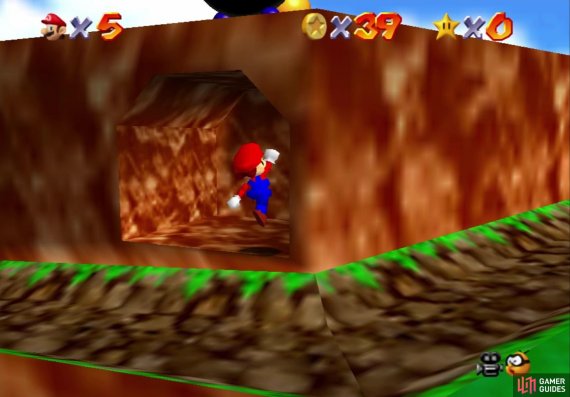 Look for the alcove in the mountainside while going up it (left), which is actually a warp that leads to the summit (right)

Thankfully, you can just hug the barbed wire fence to get past it without getting hit. Once you sneak by the Chain Chomp and cross the wooden bridge, go through the large opening in the gate that’s past some Bob-Ombs. You should be right in front of a pit that has two Big Steelies, but it’s really easy to get by them. When you are, you can begin your ascent up the mountain, but be wary that more Big Steelies will be rolling down the path, so be ready to either dodge them or jump over them. A single Double Jump is more than enough to clear them. If you come across a small alcove in the side of the mountain, you can stand inside it and be teleported to a different alcove near the summit. If you go the normal way, you shouldn’t expect anything too challenging, other than one or two gaps to jump over and more Big Steelies. At the summit, you will find King Bob-Omb, so approach him to begin the battle. 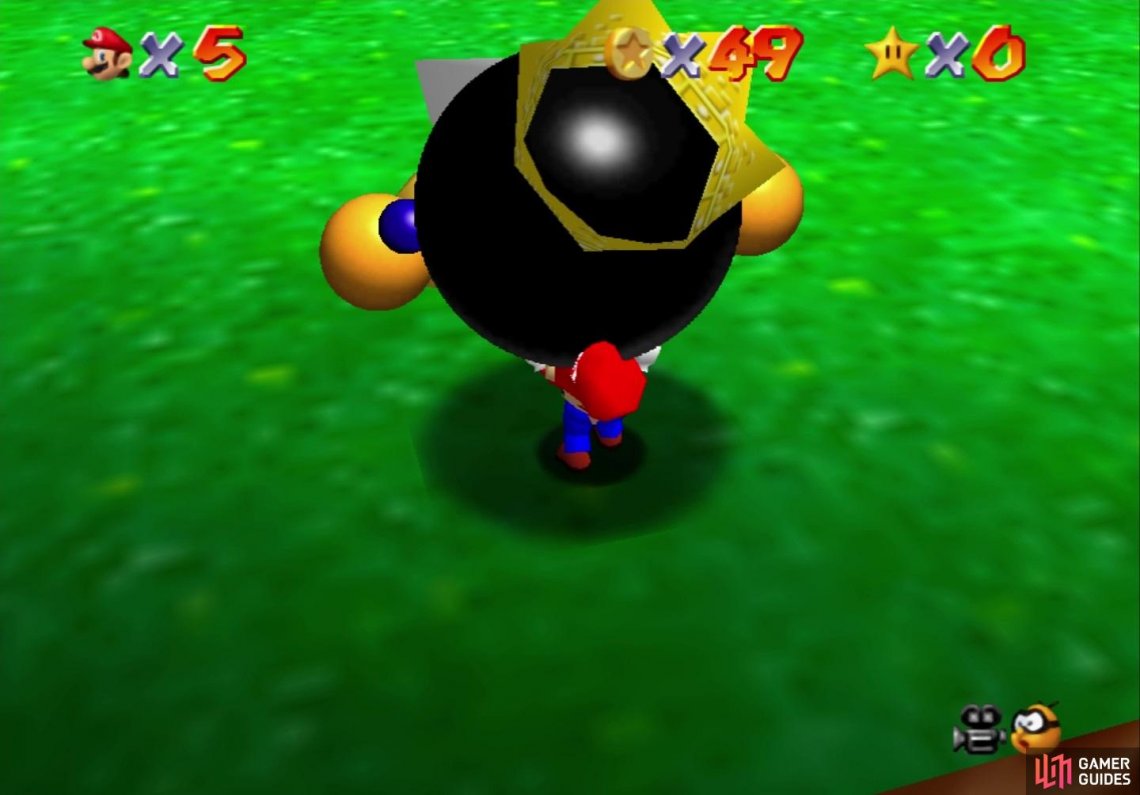 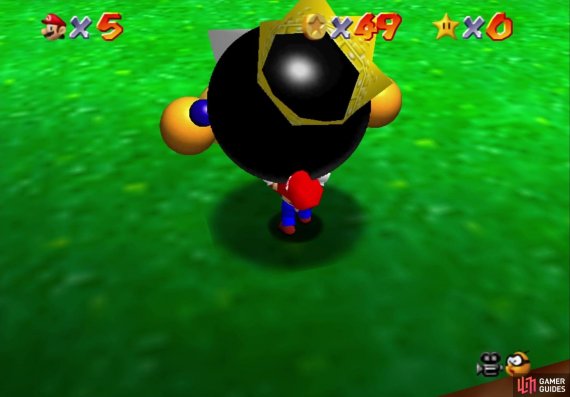 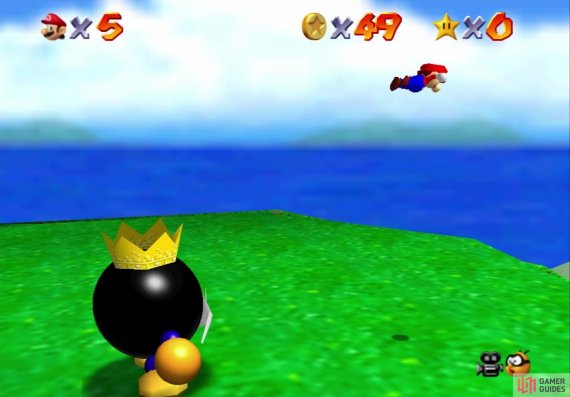 Your goal is to pick up King Bob-Omb and throw him (left), If he grabs you, though, he can toss you off the mountain (right)

Despite the obvious size difference, the fight with King Bob-Omb is not much different than with the regular Bob-Ombs, only he won’t be trying to blow up in your face. Instead, King Bob-Omb will attempt to grab you, then attempt to throw you off the summit. If you do happen to get thrown off the summit, the fight will reset and you will have to do the whole battle over from the beginning. So, the only real strategy with King Bob-Omb is to get behind him, pick him up like any normal Bob-Omb and toss him anywhere else on the summit. After being thrown once, he will have a higher turn speed than normal, but this only lasts until he takes a step or two. Toss King Bob-Omb three times to earn the Power Star.