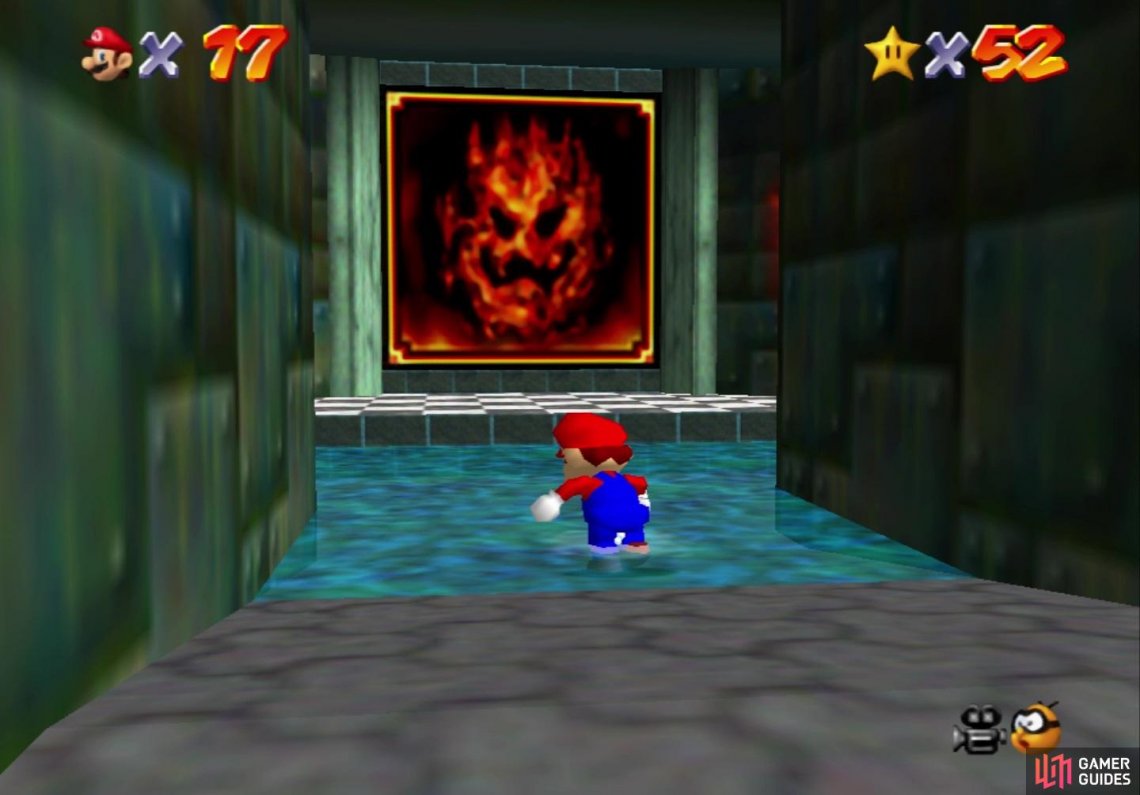 You will need to complete Bowser in the Dark World in order to gain access to this course, which is located in the basement of the castle. Go through either of the wooden doors in the main lobby, then down the stairs and through the locked door with a keyhole. Go down the hallway and through the next door, which is an area with some water. The painting with the fire pictured on it is the entrance to this course and is very hard to miss.

Lethal Lava Land is a course that is split into two parts and it can be a very dangerous place. The outside area will be situated around a volcano, while the inside portion will be inside that volcano. If you look at the initial map from an overhead perspective, you kind of start at the bottom of the map on the outside. You will begin the map on a little island with two signposts, which talk about running around certain enemies and controlling Mario if you happen to fall in the lava. If you take a look behind you, there will be another island that has a Wing Cap block on it. This isn’t really needed for any stars, but it does make for an alternative solution for one of them.

Moving forward from the starting point, there will be an arch and another signpost at the end. This one talks about riding a Koopa shell, but it’s not available until you’re asked to go inside the volcano. Returning to the arch, cross the bridge to come to a fork. The right path leads to some upside-down pyramid-shaped platforms that shift depending on where Mario is standing. This path also lets you reach the volcano, with a ring-shaped platform surrounding it. The platform will spin and when it stops, fire will spew out of the volcano, then the platform will start spinning again.

There are two long platforms near the volcano, which ebb and flow into the lava. Both of these lead to a circular platform with some Bullies, as well as serpent-like walkway. There is a small platform next to the one with the Bullies, which beings moving when you jump on it and leads to a giant log and the other side of the fence you can see at the beginning of the stage. Double back to the serpent-like walkway and at the end, you will find another of those bouncing boxes with faces on it, similar to the one found in Big Boo’s Haunt. There is another circular island off to the side, which has a Mr. I sitting in the middle of it. 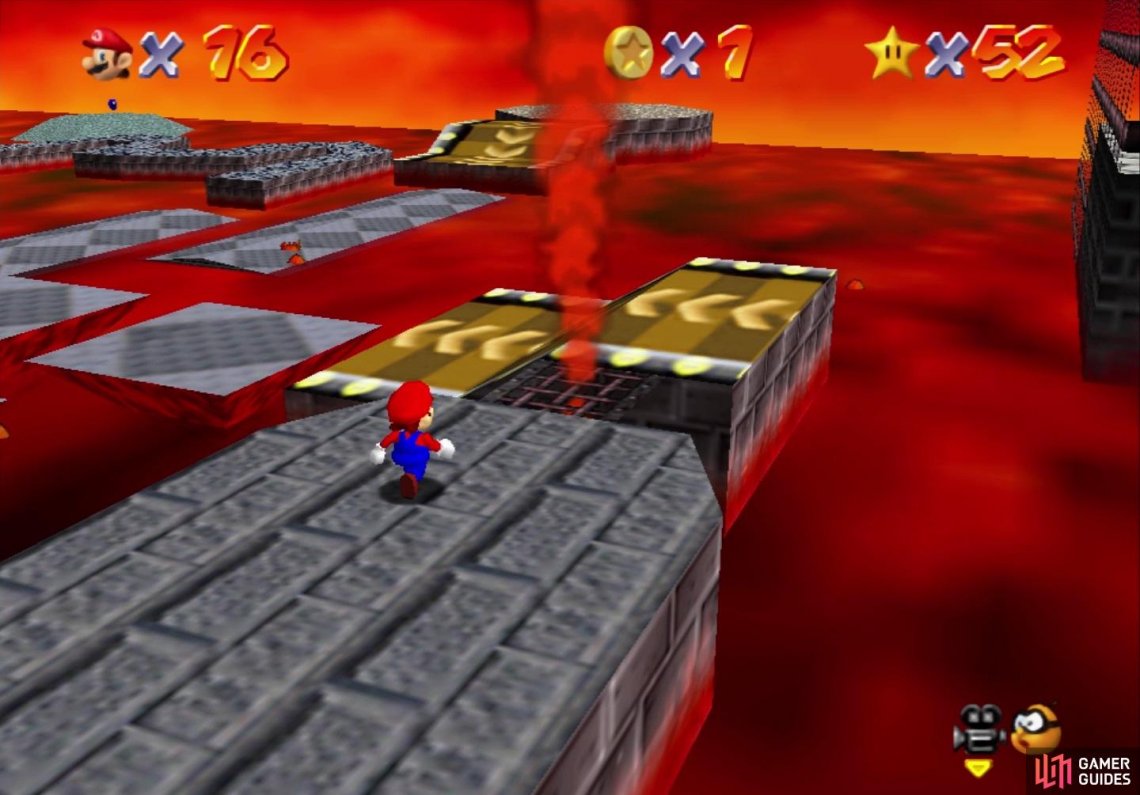 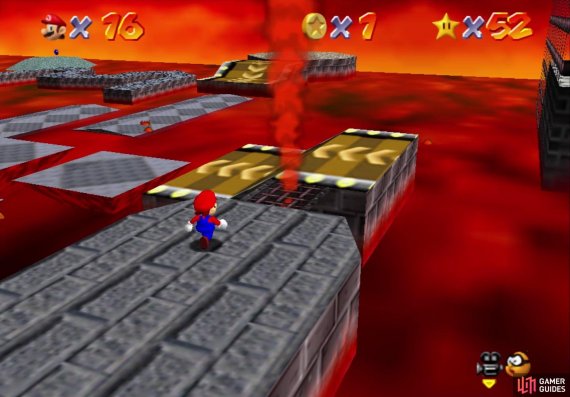 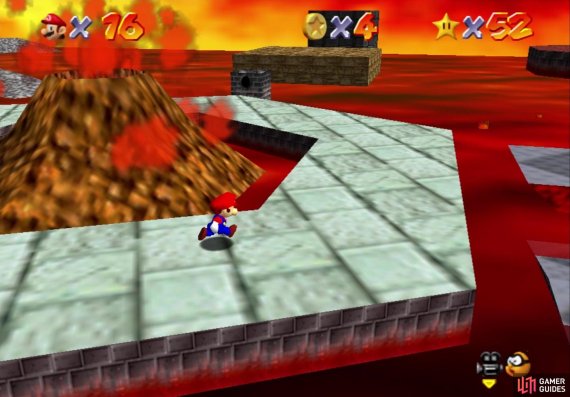 There will be a lot of fire jets around the course (left), The volcano will actually spew fire whenever the platform stops spinning (right)

Also found at the end of the serpent-like walkway are four square platforms that get covered/uncovered in lava. On the opposite side of those is a large platform with some Bullies. Knock all three into the lava and you will spawn a Big Bully. There will be a moving platform that comes near this large platform, that leads to the other large platform, where a Big Bully is present. On the one side of this large platform is another piece of land that submerges into the lava, which also connected to a platform that has two Fire Bars spinning around it. Connected to the Fire Bars platform is a long one that has some more Bullies, then there will sliding puzzle with Red Coins.

Note that the sliding puzzle, featuring Bowser’s magnificent visage, will move on its own, so you will need to be careful not to fall into the lava if a piece moves out from under you. Next to the sliding puzzle will be another section that gets submerged with lava, then there will be another grating housing a Mr. I. Note that this Mr. I is sitting atop a hole that functions as a warp. The warp will bring you to the center of the platform with the Wing Cap block. The bridge next to the grating area will open and close at intervals and is connected to the beginning of the course.

Upon entering the volcano, you will have two different ways to go. The path behind you leads to an elevator that eventually brings you to some poles to climb, with some Fire Bars in between. After the second pole, you have some small platforms to navigate before reaching a star. For the other direction at the beginning of the volcano, you will have some pathways that are relatively harmless, minus a Bully or some fire being shot out of the wall. After the first Bully, you will need to be careful, as part of the wall will come out to try and crush you. After that, you have more tiny platforms, then a “bridge” by a lavafall, which is occupied by another Bully. The last bit before the top will be some poles, with the highest one containing a 1-Up. 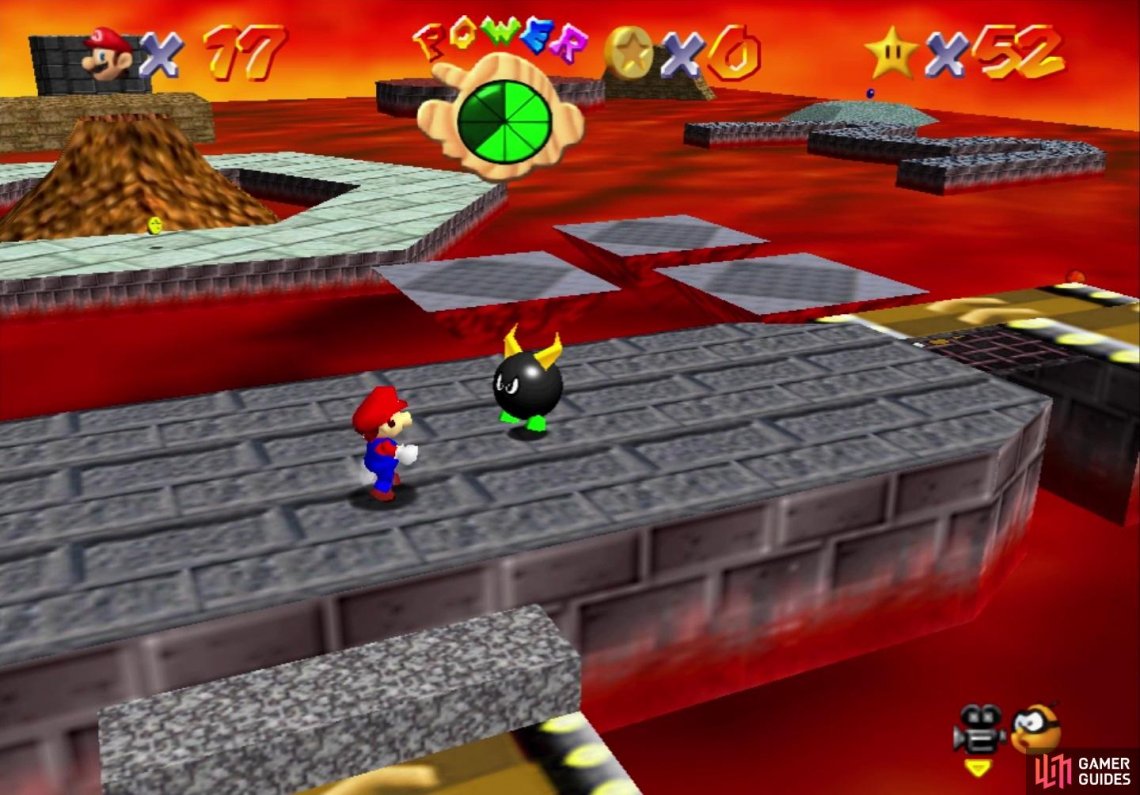 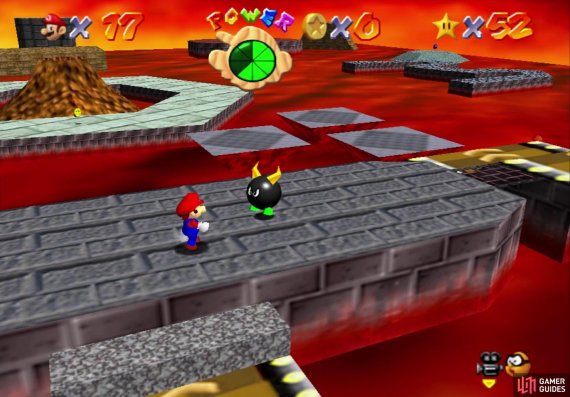 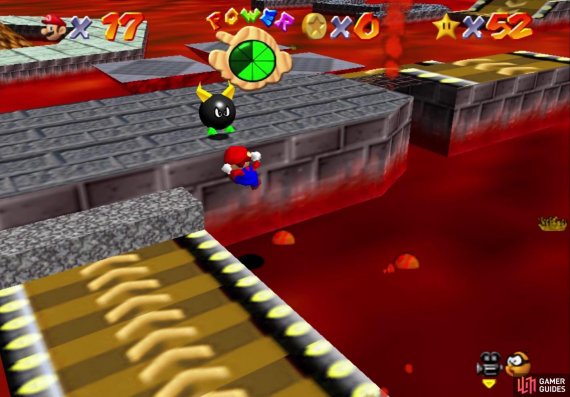 Bullies will continually charge at you when you are close (left), Being knocked into the lava by Bullies is a huge possibility (right)