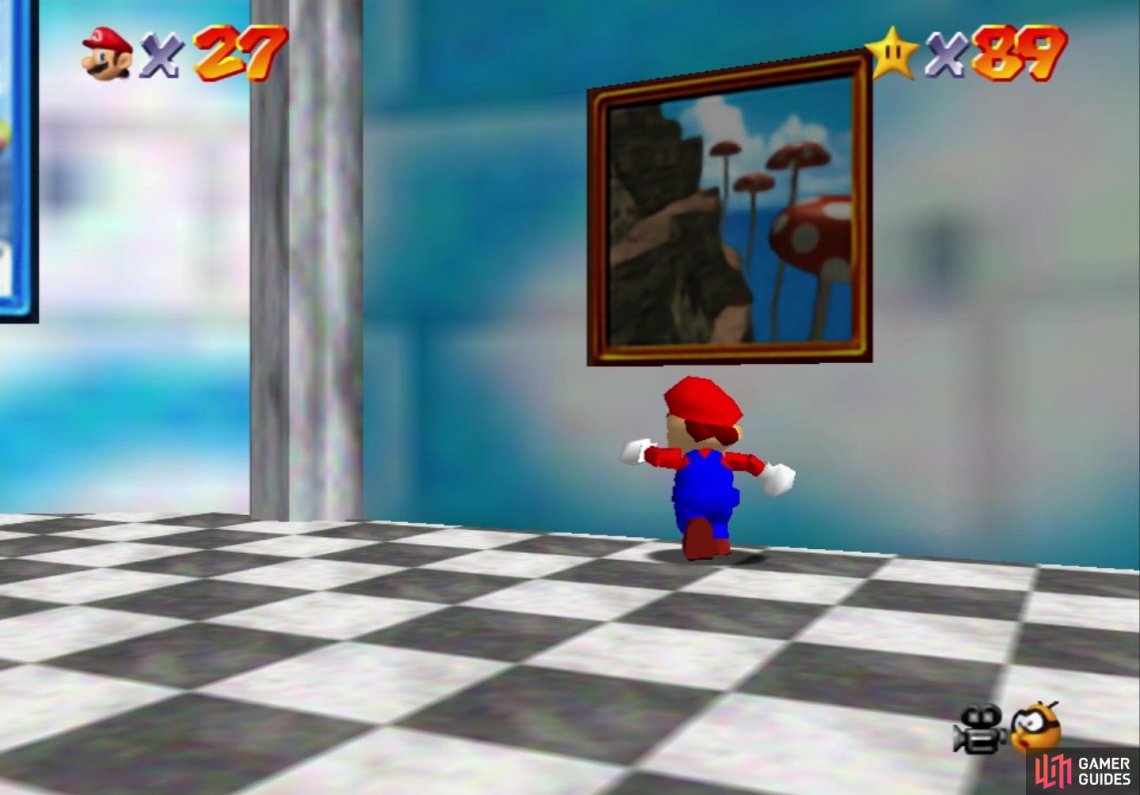 This small painting is the entrance to the course

To get to this course, you will need to clear Bowser in the Fire Sea in the basement of the castle to get a key that opens the door in the main lobby. Go up the stairs to the next floor and look behind the stairs to find a small painting with some mushrooms on it, which is the entry for this course. This is a pretty standard course, as it is a tall mountain that doesn’t really deviate from most normal stages in the game.

You will begin at the bottom of the mountain, on a small platform, next to a pond. There will be some Goombas ahead of you and behind you, if you head to the end, you will find a 1-Up. Note that if you jump off of the edge by the 1-Up, a gust of wind will lift you up to a higher area, so it can be used as a shortcut on your quest to the top of the mountain. Back to the beginning, a little past the Goombas, you should see a slope heading downward. This leads to a dead end, with some coins and one of those boxes that hop when you grab it. Returning to the upper path, you will come across some mushrooms that have Red Coins on them.

As you continue along the mountain path, you will enter an area with some Monty Moles. Right before the Monty Moles, there is a path below it that is home to the course’s cannon. One of the small mushrooms by the Red Coins acts as a warp that brings you down here. There will be a number of ledges along the vined wall near the Monty Moles, which house the rest of the Red Coins and also lead higher up on the mountain. For now, continue past the Monty Moles and subsequent Bob-Ombs, to an open area with a Chuckya. If you don’t remember this enemy from Wet-Dry World, then it can only be defeated by picking it up from behind, then tossing it. While crossing the bridge, if you look closely, you should notice a hidden ledge before jumping to the next section.

This hidden little area, which is barely nothing more than a small platform, is home to the Bob-Omb Buddy for this course. Jump up to the next section, where you will find a small monkey (named Ukiki). You can grab the monkey, but doing so will make it steal your hat. Additionally, there is a way to be blown off the mountain later and should this happen, you will lose your hat and this Ukiki will be wearing it. There will also be a Fly Guy here, which can be used to fly over the next gap if you manage to jump on top of it. 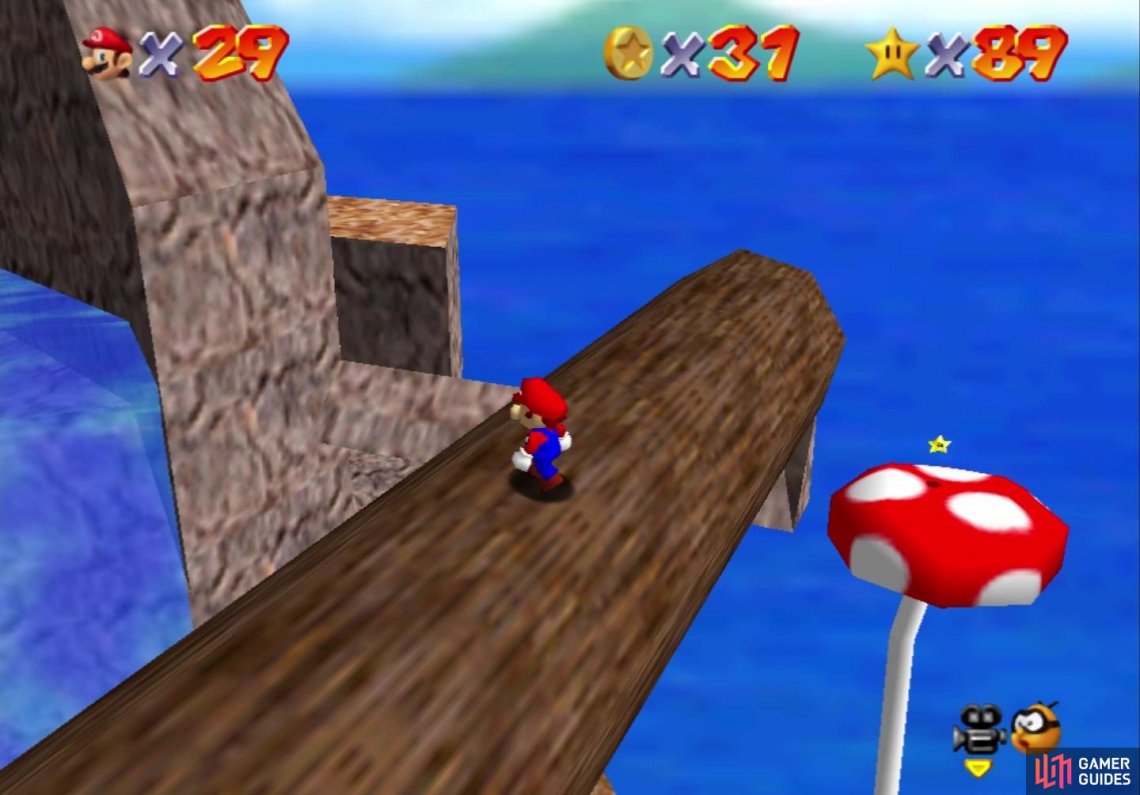 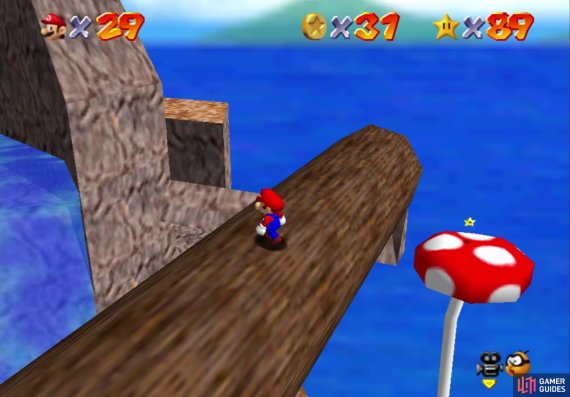 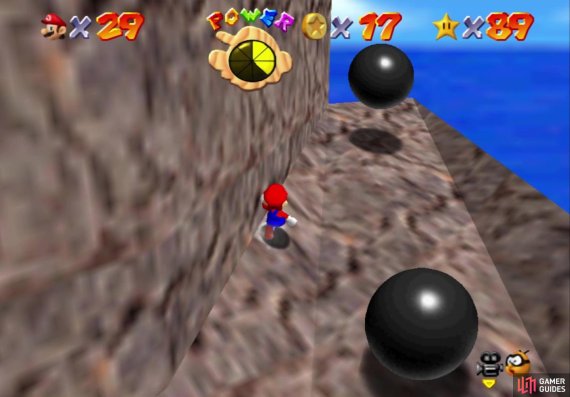 The giant log will be used to cross the big gap (left), The hill with the iron balls can be annoying (right)

To get over the gap normally, you will be using the giant log, which will roll as you move on it. Once you are across the gap, continue along until you encounter some giant metal balls rolling down the mountain. The downward-leading slope near the rolling balls leads back to the ledges above the Monty Moles. While dodging the rolling balls, make your way up the hill and eventually, you will reach a large gap by the waterfall. Note that there is another downward-leading slope just past the rolling balls, which leads to the top of the section by the Monty Moles.

Long Jump over the large gap and you will be on the edge, with a cloud enemy named Fwoosh. Periodically, it will blow a gust of wind that will blow you off the mountain, so you will need to quickly run by the Fwoosh before it does that. Immediately past the Fwoosh, there will be five coins, as well as a flat wall in the mountainside. If you press up against this wall, you should notice that it will ripple, similar to paintings. Jump into the flat wall here and you will be led to a slide. This slide will fraught with danger, but isn’t any more dangerous than some of the others in the game. At the end, you will be able to jump into a hole that puts you on a ledge underneath where you encountered the Chuckya.

Returning to where you jumped into the slide, you will be pretty close to the summit of the mountain. Past the slide’s entrance, there will be a little patch of ivy, then a purple switch. This switch creates two breakable blocks, one of which will be right next to you. The other block will be located at the waterfall just ahead, making it easier to grab the star hidden behind it. Cross the thin ledge next to the waterfall, then there will be one more slope up to the summit. During [Scale the Mountain], there will be a star at the summit and when you’re doing [Mystery of the Monkey Cage], you will find an Ukiki. On all subsequent stars, the summit will have nothing at all. 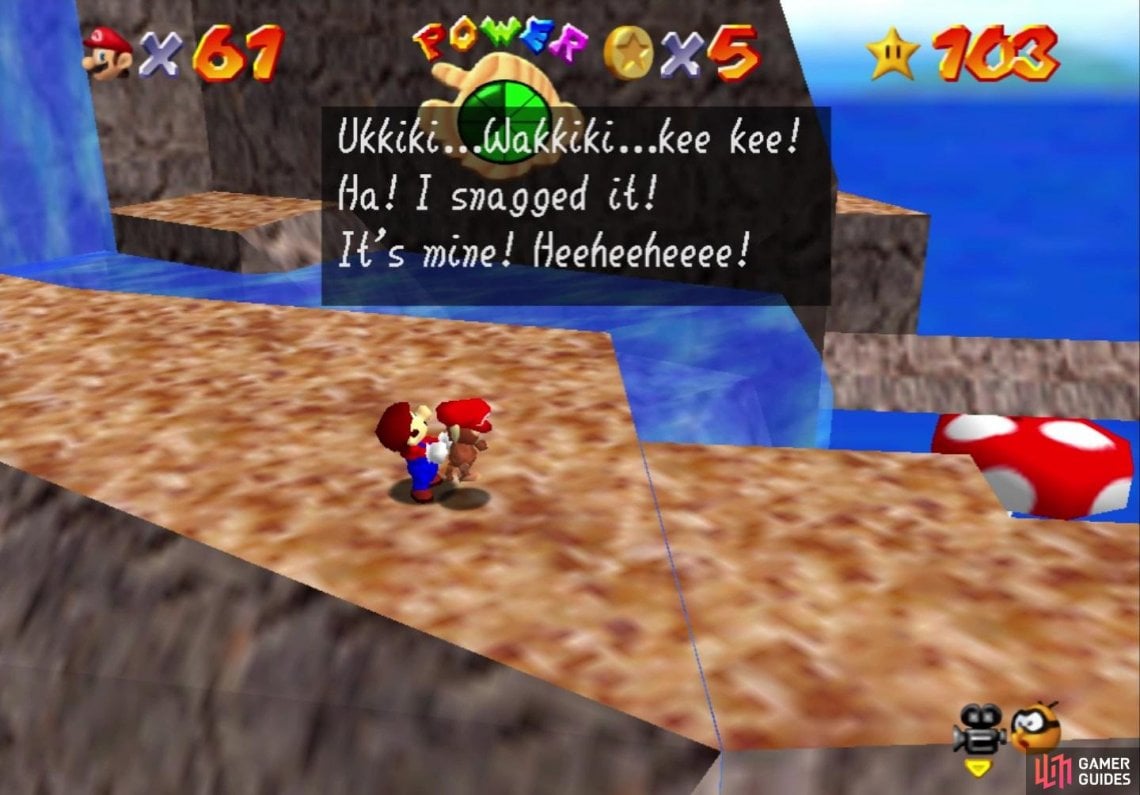 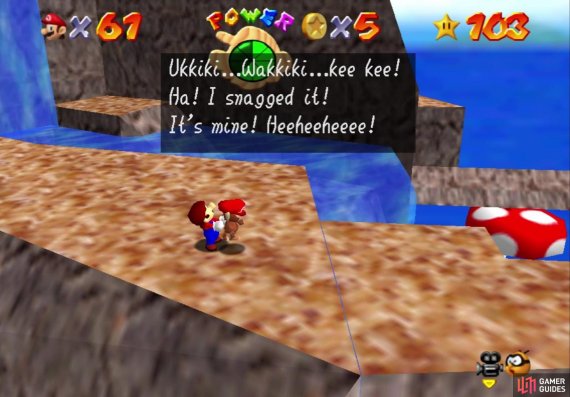 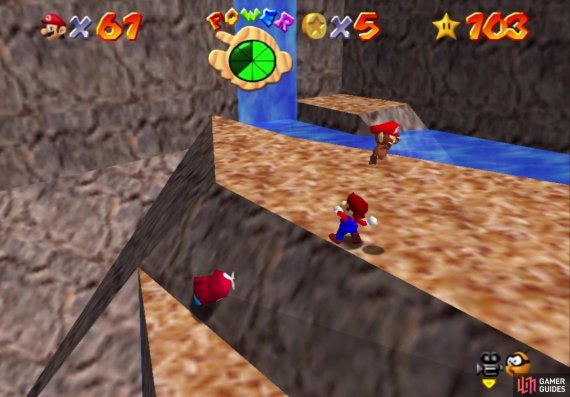 Pick up this Ukiki and it will steal your hat (left), meaning you will have to chase after it to get it back (right) 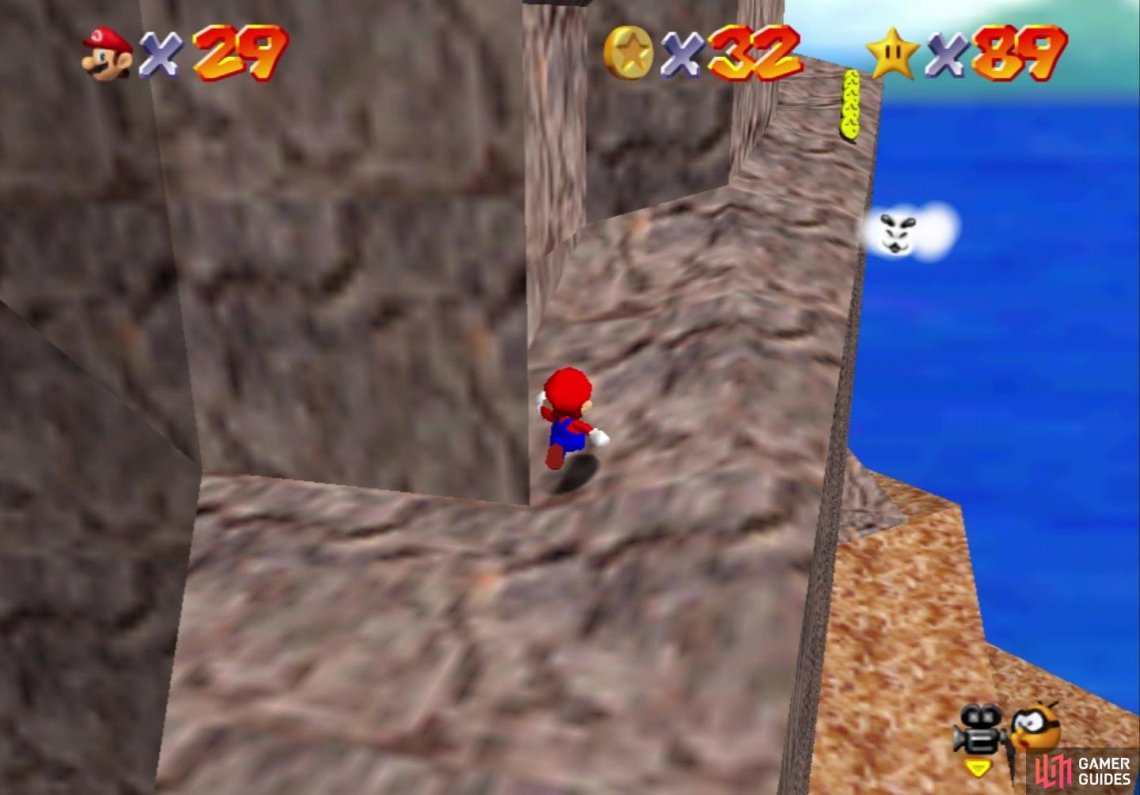