This is the first real boss of the game and it’s behind the double doors with a large star on it at the top of the stairs in the first hub. To open this door, you will need a total of 8 Power Stars. Behind the door, you will see a painting of Princess Peach at the end of the hallway, but as you get closer, the picture will change to that of Bowser. When you get far enough, though, a trap door will open up, placing you in the boss level. This is a pretty traditional level, with a beginning and end, as well as a boss fight at the end. In addition to this, you will find there are eight Red Coins hidden in the level, resulting in another Power Star to be obtained. 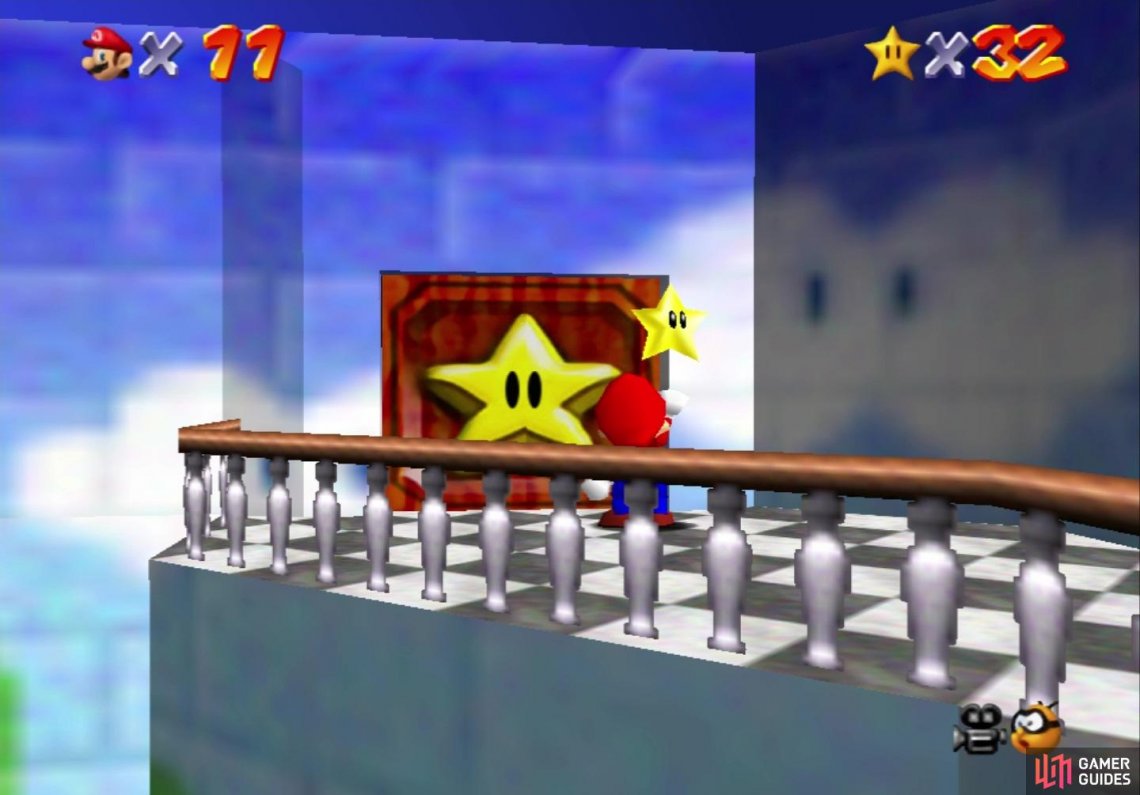 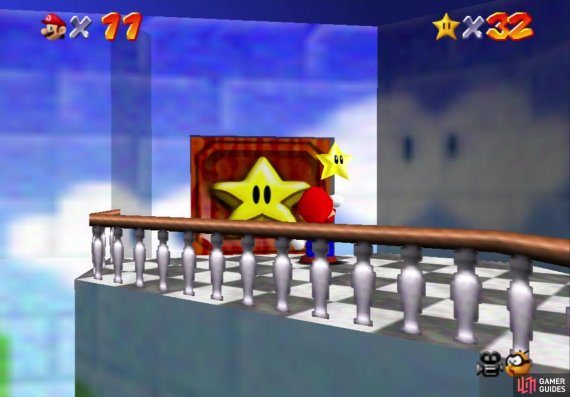 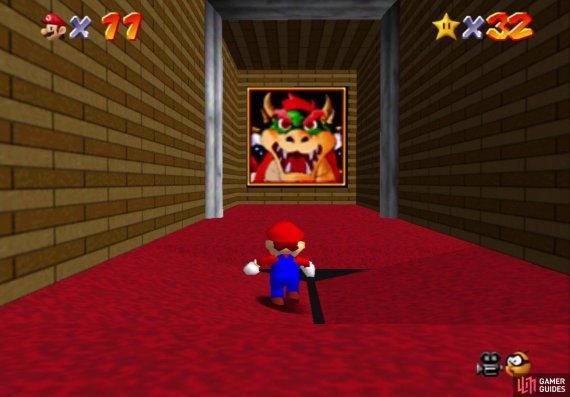 You will need 8 stars in order to open this door (left), Before you reach the end of the hallway, a trap door will take you to Bowser’s stage (right)

Bowser in the Dark World¶

Unlike the other courses thus far, Bowser in the Dark World is fairly linear in nature. When you begin the stage, move forward and you will see a device shooting out some flames near a purple button. When the flames have subsided, step on the purple switch to make some blocks appear. These blocks only appear by the two Red Coins near the beginning of the level; yes, TWO Red Coins. Red Coin #1 is right next to the purple switch, while Red Coin #2 is back at the very beginning of the level. You won’t have much time until the blocks disappear, so you might want to grab the closer one first, wait for the button’s timer, then refresh it to get the second coin.

Once you have both, continue past the flames to two platforms on a track, moving in a square shape over a pit. Up the slope past those platforms is another flame-spitting device, then there will be a ferris-wheel like platform. Beyond that, you will run into some Goombas and a yellow box that contains a 1-Up. As you continue on the path past the bridge, you will run into enemies called Amps, which will give you a little shock if they happen to touch Mario. The Amp circling the second crystal is kind of guarding Red Coin #3, which might be a little difficult to see depending on your camera angle.

When you’re moved past all of the Amps, you will be in front of a platform moving through a static platform. Wait until it moves into your range, jump on it and onto the static platform. On the other side, right next to the static platform, you will find Red Coin #4. Upon grabbing that fourth coin, you can do one of two things here, either continue on the main path or Long Jump to the large platform that has an Amp circling it. It’s not a hard jump and you can get Red Coin #5 on that platform, so do that and Long Jump back to the main path. Up next will be two sets of platforms on tracks, similar to earlier in the stage. In the corner of the first set will be Red Coin #6, so grab it and head to the final section. Note that if you didn’t get the fifth coin before, you can use the thin wooden walkway here to reach that same platform with the Amp. The last section will be two seesaws, with some platforms above it that are in the shape of an upside down L. For now, jump on the first seesaw, then go to the ledge in between the other platforms. You will want to wall jump to the top of these platforms, where you will see Red Coin #7. The final Red Coin, Red Coin #8, will be on the lower ledge, on the side of one of the platforms.

Go to the end of the stage, where you need to jump up a few platforms if you’re on the lower level. There will be another purple button here, which forms some stairs on the slope ahead of it. At the top, collect the star from the Red Coins behind the pipe, then jump into the pipe to confront Bowser for the first time.

Bowser in Super Mario 64 is pretty similar across the entire game. This bout takes place in a circular arena, with large spiked balls sitting on the outside of it. Your goal will be to throw Bowser onto one of these, as they are bombs. Bowser’s first fight is pretty tame, as he only really has two attacks he can do. If you’re far away from him, Bowser can jump towards you and should you be on the ground when he lands, you will be stunned for a few seconds. The other attack Bowser does is a fire breath, with some flames lingering on the field for a short duration. 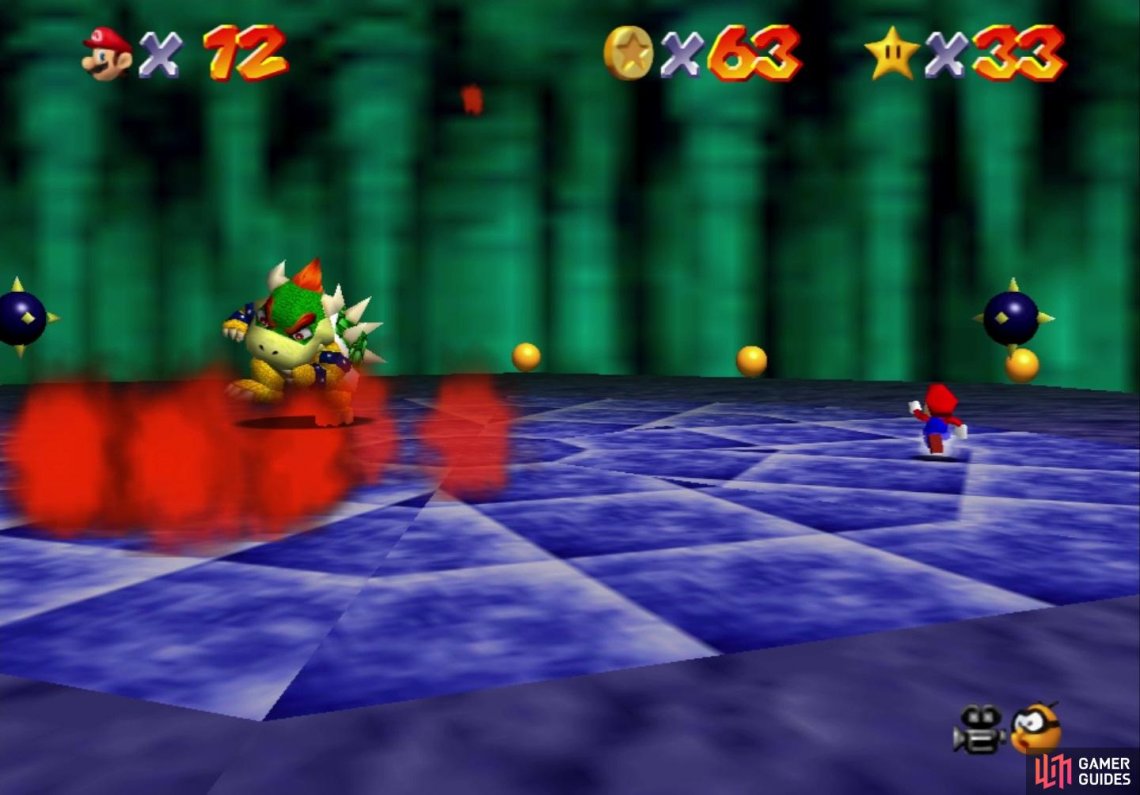 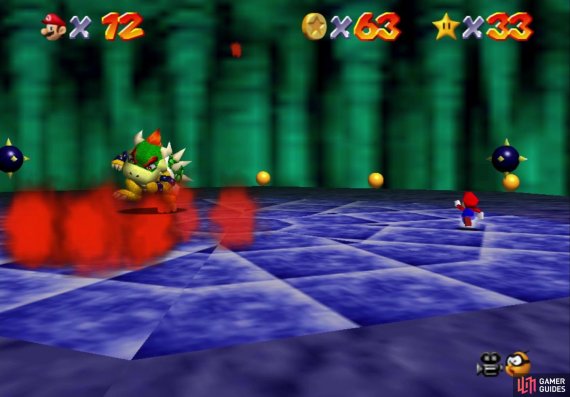 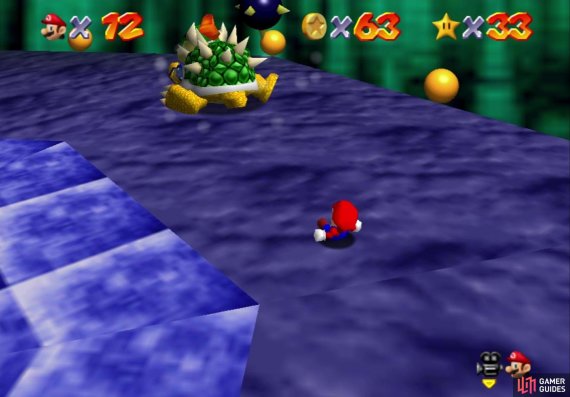 Bowser’s flame breath sticks around after he’s finished (left), Throwing Bowser into a bomb might take some practice (right)

So, it’s already been mentioned that your goal is to throw Bowser into one of the bombs, but how exactly do you do that? You need to go behind Bowser and grab his tail with either of the attack buttons. Once you have a hold of it, rotate the left analog stick in either direction to start spinning Bowser. To let go, press either of the attack buttons again to send Bowser flying. Getting behind Bowser can be a little troublesome, but if you wait for him to breathe fire, then he’s a sitting duck. Also, getting him close enough to the edge and near one of the mines is ideal, so you don’t have to throw him that far.

When you finally place Bowser’s face on a bomb (the hitboxes are kind of forgiving, too), he will land back in the arena and yield a key. This key will open the door leading to the castle’s basement, which is located through either of the wooden doors in the main lobby.